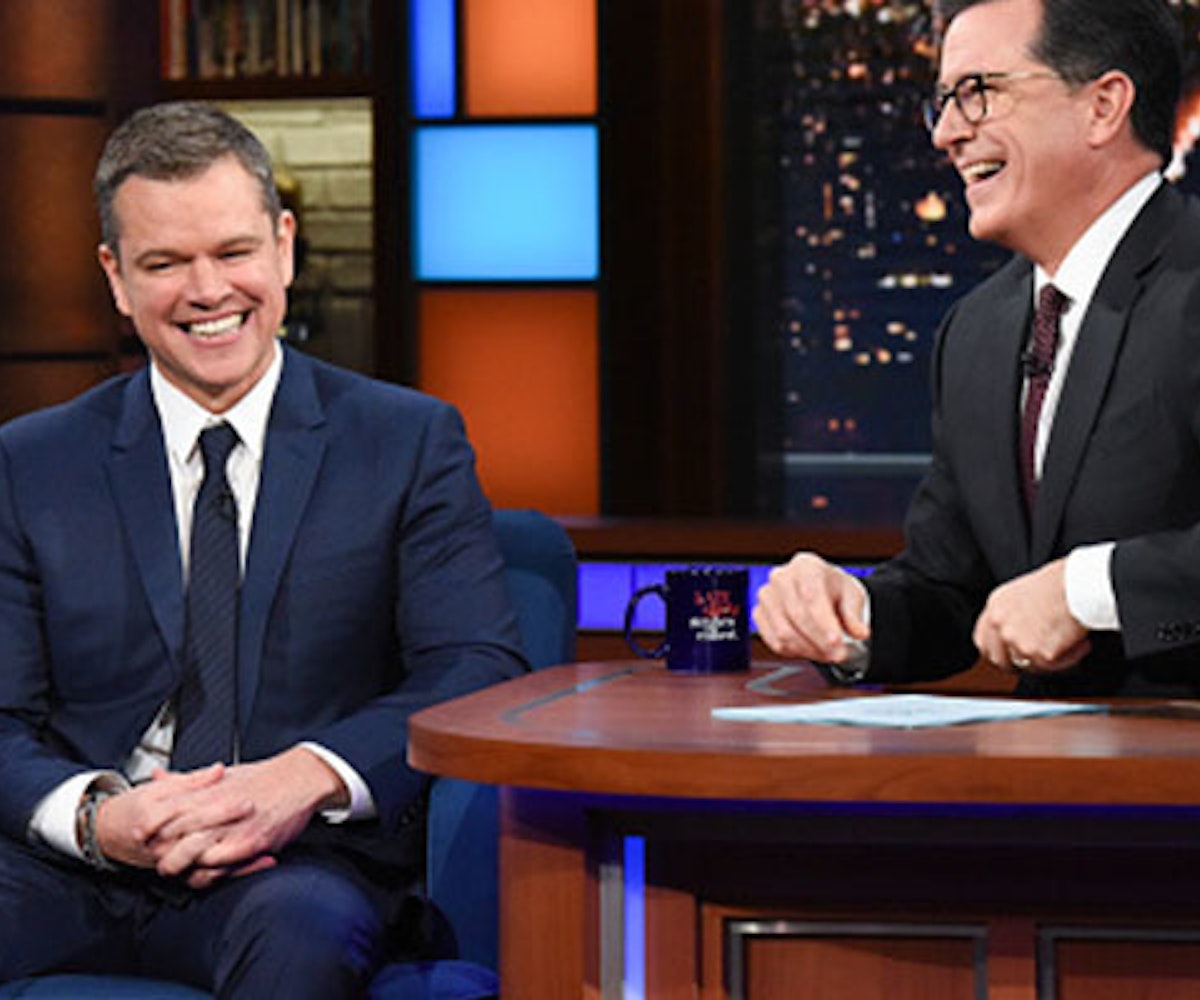 Actor Matt Damon offered his two cents on the current reckoning facing powerful men who've been accused of committing sexual assault, and a lot of people wish he'd just kept it to himself. In an interview with Peter Travers, the actor offered up some really frustrating opinions on sexual misconduct and how it should be handled. Basically, he and his friends are innocent and should lawyer up, and we need to go easy on comedian Louis C.K.

“I do believe that there’s a spectrum of behavior,” Damon said. “And we’re going to have to figure—you know, there’s a difference between, you know, patting someone on the butt and rape or child molestation, right? Both of those behaviors need to be confronted and eradicated without question, but they shouldn’t be conflated, right?”

To be clear, I don't think anyone ever said patting someone on the butt is the same as child molestation, unless that person is a child. “All of that behavior needs to be confronted, but there is a continuum," he said. "And on this end of the continuum where you have rape and child molestation or whatever, you know, that’s prison. Right? And that’s what needs to happen. Okay? And then we can talk about rehabilitation and everything else. That’s criminal behavior, and it needs to be dealt with that way. The other stuff is just kind of shameful and gross.”

Basically, if you don't rape someone in Damon's world, you should just be punished by knowing that you're gross. For instance, he thinks everyone was too harsh on C.K. "The Louis C.K. thing, I don’t know all the details. I don’t do deep dives on this, but I did see his statement, which kind of, which [was] arresting to me," he said. "When he came out and said, 'I did this. I did these things. These women are all telling the truth.' And I just remember thinking, 'Well, that’s the sign of somebody who—well, we can work with that.'"

Damon is probably the only person who was impressed with C.K.'s statement, which completely omitted the words "I'm sorry." Also, if you "don't do deep dives on this," maybe don't talk about it to the press? Because maybe you don't know what you're talking about? Just a thought. "I don’t know Louis C.K... I’ve never met him," he continued, "I’m a fan of his, but I don’t imagine he’s going to do those things again. You know what I mean? I imagine the price that he’s paid at this point is so beyond anything that he—I just think that we have to kind of start delineating between what these behaviors are."

When it came to Al Franken, Damon said he "would have preferred if they had an Ethics Committee investigation," he said, adding:

It’s like at what point—you know, we’re so energized to kind of get retribution, I think. When you see Al Franken taking a picture putting his hands on that woman’s flak jacket and mugging for the camera, going like that, you know, that is just like a terrible joke, and it’s not funny. It’s wrong, and he shouldn’t have done that… But when you talk about Harvey [Weinstein] and what he’s accused of, there are no pictures of that. He knew he was up to no good. There’s no witnesses. There’s no pictures. There’s no braggadocio… So they don’t belong in the same category.

From a business standpoint, Damon said he agreed with director Scott Ridley on firing Kevin Spacey from his upcoming movie, All the Money in the World, after allegations came out that he sexually abused a teen. "That was smart," he said. "That was a total business decision by Ridley. I haven’t talked to him, but… it wasn’t a creative choice for Ridley. Ridley has a big movie coming out… and nobody right now is in the mood to see a Kevin Spacey movie… And I don’t disagree with his decision to do that. I mean, that movie, I think, will do much better without Kevin in it."

When it came to Weinstein, Damon basically played dumb. "Nobody who made movies for him knew," he said of rape allegations against Weinstein. Even though he did admit Ben Affleck told him about Weinstein sexually harassing Gwyneth Paltrow.

Any human being would have put a stop to that, no matter who he was. They would’ve said absolutely no. You know what I mean?… I knew I wouldn’t want him married to anyone close to me. But that was the extent of what we knew, you know? And that wasn’t a surprise to anybody. So when you hear Harvey this, Harvey that — I mean, look at the guy. Of course he’s a womanizer… I mean, I don’t hang out with him.

And when it came to him or his friends, including Casey Affleck, being accused of sexual misconduct, Damon said, "It depends on what the accusation is," in terms of whether or not they should face punishment. He also said he'd lawyer up:

Ten years ago, you made a claim against me and I had a big movie coming out, okay? I have $100 million or I have a movie that is personally important to me coming out, and close to the release of that film, you say, "Matt Damon grabbed my butt and stuck his tongue down my throat." We would then go to mediation and organize a settlement. I’d go, "I don’t want this out there. Peter’s going to go out and talk to the press and run his mouth, and it’s going to be overshadowing the opening of this movie. How much money do you want?" The lawyers would get together, and they do this cost-benefit analysis, and they’d go, "Oh, this is what it’s worth." And I look at the number and go, "Okay, I’ll pay it, but you can never talk about this again. You’re fucking lying about this, but never talk about this again."

All to say, keep your opinions to yourself, Damon.

NEXT UP
Shopping
49 Cool Things Under $30 That You'll Get A Sh*t Ton Of Use Out Of
Fashion
Dickies & Gucci Vault Drop A Sparkling, Studded Holiday
Culture
Grey’s Anatomy Star Adelaide Kane Brings Clarity To Celebrity
Culture
Death Cab For Cutie & Postal Service Are Co-Headlining A 20th Anniversary Tour