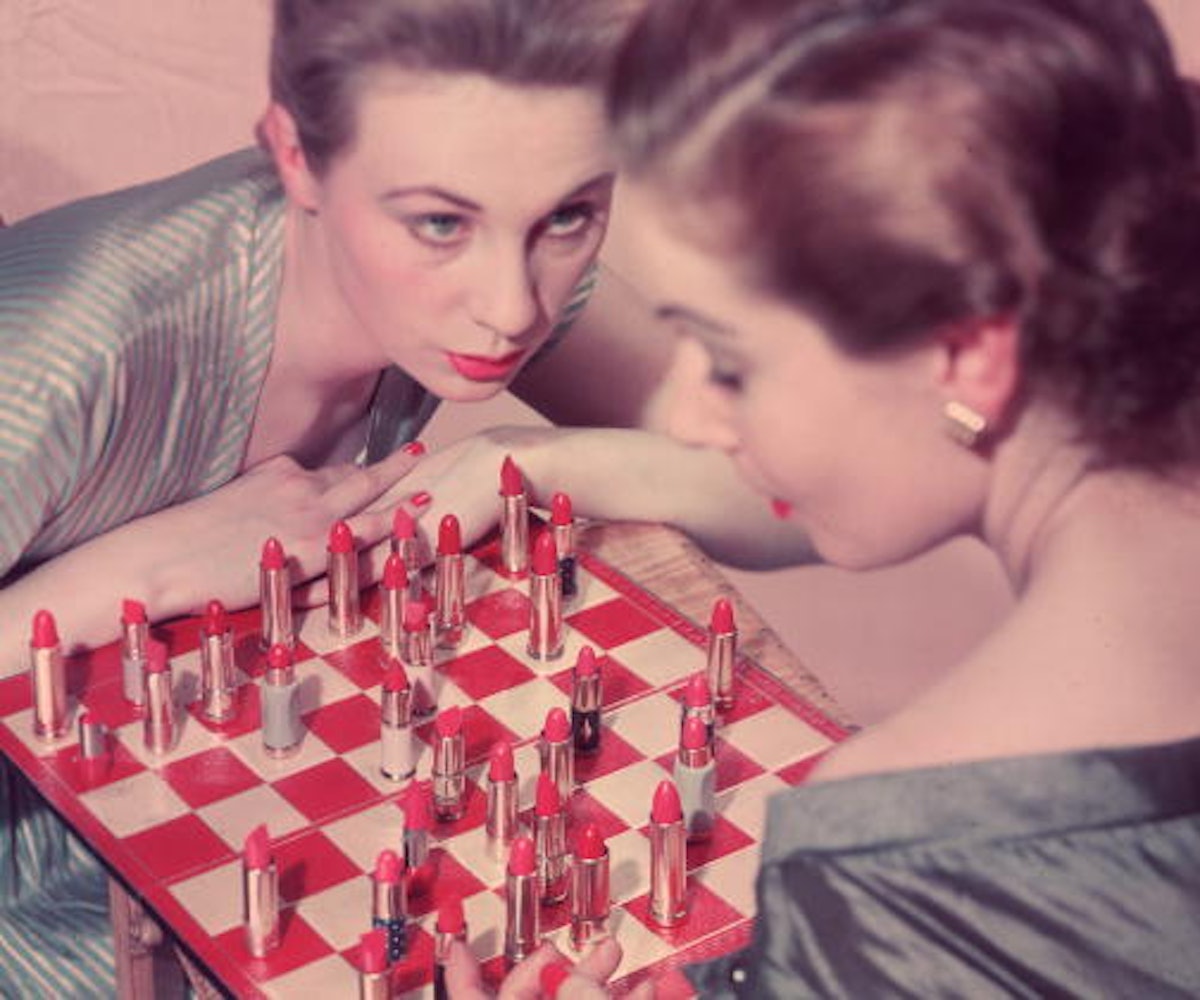 The Summer of Scam continues unabated, having been launched into existence with the Anna Delvey saga, grown into unwieldy proportions thanks to news of spy-scammer extraordinaire, Maria Butina, and now gotten a further boost with an article on The New Republic about yet another scam: women's media.

While the article was inspired by a recent edition of Refinery29's Money Diaries, in which a 21-year-old intern lives in a $4,000/month apartment and vacations in a personal chef-staffed Hamptons home (thanks, generational wealth!), TNR's Josephine Livingstone doesn't merely offer a critique of the disturbing dissonance of R29 promoting the lifestyle of a 1-percenter as being that of someone who lives off a $25/hour salary, instead, Livingstone expands her gaze to Refinery29 as a brand, and women's media as a whole. And what she sees is not flattering.

"[T]he problem is an entire industry... There exists not a single mainstream women’s magazine that does not rely on money from the fashion and beauty industries," Livingstone writes, elucidating the "open secret in journalism," namely, that advertising is what keeps the lights on for media companies—and always has. But what makes today's iteration of media ads so troubling to Livingstone is the rise of masking sponsored content as "native" content; she writes, "Instead of sitting in a box next to a trashy article about celebrities, lucrative advertising these days lurks inside content that simulates ethical, feminist journalism."

And therein lies the real problem for Livingstone—it's not merely that ad-driven clickbait exists, it's that it coexists with other, non-branded pieces, all of which live under an umbrella of feminist "empowerment" (the pretty much uniformly adopted narrative within women's media in the last couple of years), thus rendering the latter work, to Livingstone, pointless, since it's all a part of the same content factory. "Once," Livingstone writes, "we had ads for shampoo—now we have sites pretending they aren’t secretly running a branding agency from inside their feminist publishing project. It's like Coca-Cola trying to sell you self-care."

Of course, it's not like that, it is that. It's also the case that alcohol brands try to sell you on a healthy, sports-filled lifestyle, by advertising during baseball and football games. And heavily polluting car companies try to appeal to the outdoorsy part of you, the one that wants to roam through rugged, mountain-filled national parks... in a fossil fuel-guzzling SUV. There are so many contradictory aspects of our consumer-driven capitalist culture, but the disingenuous strategies of advertising executives certainly stand apart as examples of how much cognitive dissonance we're able to withstand without our brains just... breaking. But, clearly, this kind of thing happens all the time, so why single out women's media?

And, in fact, much of the critique of Livingstone's piece has centered on the fact that, rather than just saying that all media is, necessarily, at least a little scammy, or it wouldn't stay in business, she called out women's media in particular. And, when I first saw the headline, I, too, bristled, and immediately thought about how I could write an entire piece about how men's media is a scam, and list examples from legacy publications like Esquire and GQ to men's lifestyle titles like Men's Journal to digital-only operations like InsideHook and Gear Report. It's also worth noting that the two primary examples of women's media that Livingstone cites—Refinery29 and Bustle—were founded or co-founded by men (Refinery29 was co-founded by Philippe von Borries and Justin Stefano, who serve as co-CEOs; Piera Gelardi and Christene Barberich are also co-founders, and serve as executive creative director and global editor-in-chief, respectively; Bustle was founded by Bryan Goldberg, who is also its CEO). And yet the target of the article feels not just like the women's media companies, but the women who work there and the women who read their work.

On Twitter, Livingstone made clear that she cares about "the junior employees at feminist-branded content mills who hate the cynical way their labor is exploited," and that this article is not about attacking them, but rather pointing out the ways in which "sponcon is a rubicon!" And while Livingstone's article does that very well, there is no alternative presented to what is widely known to be a very dire time for most lifestyle publications—including, but not exclusive to, women's media. In the last couple of years, two beloved women's media sites, The Toast and The Hairpin, shut down; the founders of The Toast were very transparent about the fact that they were not making enough money to run it because it just wasn't possible without compromising advertising standards. Most women's media sites, like most women's print magazines of the past, live and die by ad dollars, and so have had to come up with new ways to earn them in the age of digital ad-blockers.

There's nothing new about this. But what is new is what irks Livingstone most: "the wider deterioration of choice, quality, and consciousness across the all media products branded 'feminist.'" This is why it doesn't matter as much to Livingstone if men reading an article about the best half-marathons to run are being tacitly sold on a specific brand of running shoes—there's no need to care as much because the goal isn't to sell feminism, an ideology which is inherently contradictory to capitalism; the goal isn't to sell a T-shirt for $80 featuring the word "Resist."

Livingstone's fear is that, "in an industry where feminism has become a product," media companies will grow "stupider," and consumers will be less "cynical." And, yes, for anyone who actually cares about systemic change and the dismantling of a white supremacist patriarchal culture designed to oppress anyone who isn't a white man, it can be absolutely infuriating to see the ways in which feminism has been commodified, much in the same way it can be cringe-inducing to see the ways in which the skin-care industry can be seen as exploiting consumers by constantly introducing new "miracle" products at astronomical prices. (We really should have known 2018 was going to be this way after it started off with the dubious revelation that skin care is a scam.)

But there is little hope in appealing to women's media brands to change; not only because, as Amanda Mull pointed out in an article for Racked about the myth of the feminist brand, "companies aren’t people, they aren’t your friends, they don’t have your best interest at heart, and they’re certainly not feminists," but also because: Media brands need advertising dollars to survive. And it's not just women's media—it's all media.

This doesn't mean it's hopeless, though. This doesn't mean women's media is only a wasteland of secret ads. It does mean that (clearly marked!) sponsored content will wind up living alongside other pieces. And it means trusting women as both individual writers and editors, but also as consumers. And women aren't stupid. We know when we're being pandered to; we know when "feminism" is being used as a way to get us to spend money, and we know when it's actually part of a larger ideology when it comes to publishing stories. No brand is going to be perfect; no website is going to contain only articles any one person will like uniformly (though, who reads a website in full?). But having to process this overabundance of information can also have the effect of making a consumer savvier; there's a reason, after all, that the offending Refinery29 article became such a flashpoint—women hated it, and complained about it, much in the same way we've done when fed other bullshit, like the notion that Kylie Jenner is "self-made."

This type of outrage indicates that women consumers are fully aware of what's being sold to them, and how the narrative is shaped by the companies presenting it. We all need to be more responsible about what it is that we're presenting in the world and what it is that we're receiving, but a scam can only exist if one party is consistently capable of fooling the other, and if there's one thing that this Refinery29 article demonstrated, it's that women are not going to be fooled anymore. We're not going to be convinced to buy some Siggi's yogurt just because there's an image of it at the top of an article; we're not going to be told an intern can afford a $200/month Equinox membership and believe it that she does so without help. We're smarter than that. We'll just click on to something else.