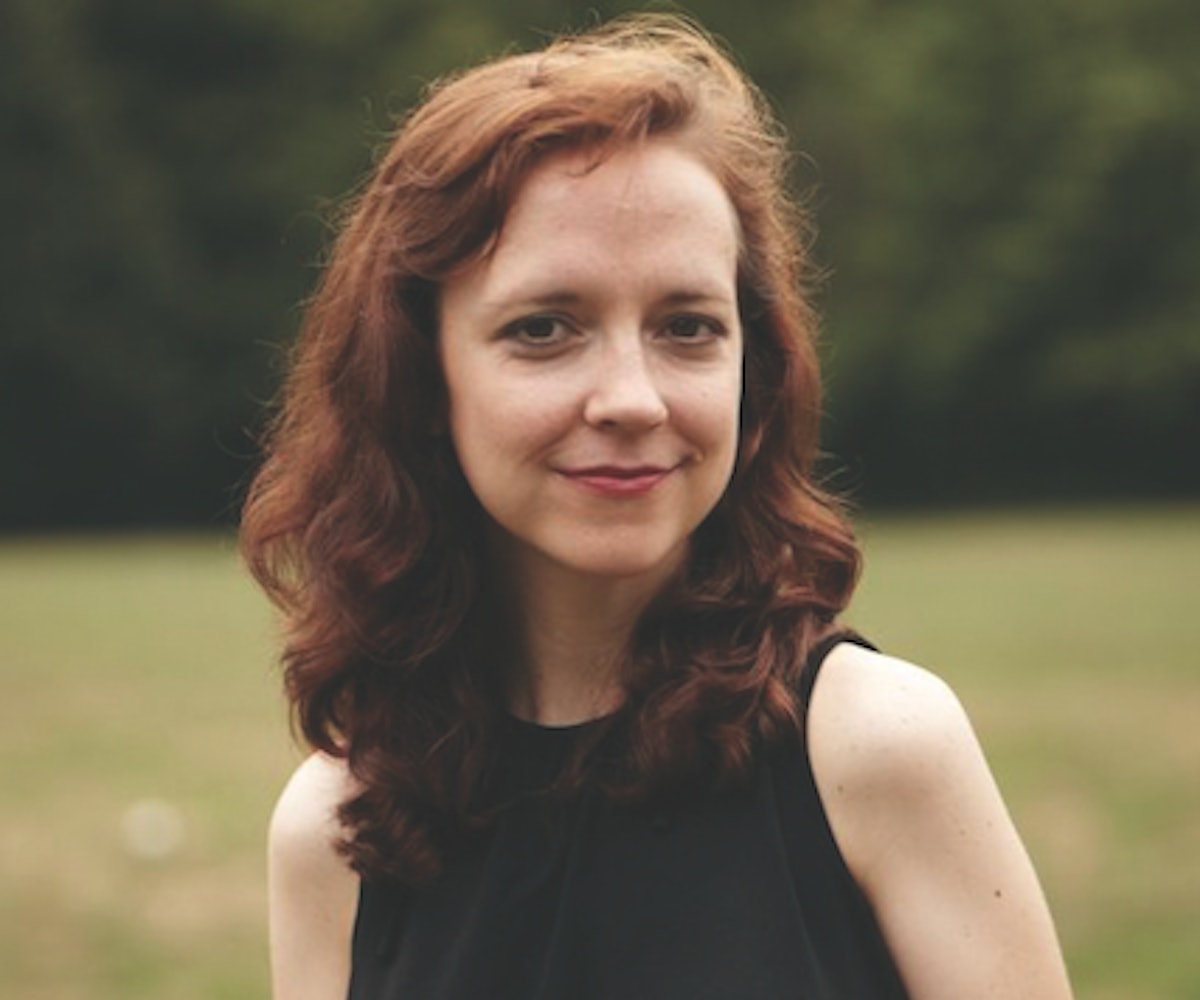 In Give Me Your Hand, Megan Abbott's latest thriller, two estranged friends—Kit and Diane—find themselves confronting their complicated past, forever disturbed by the revelation of a secret which changed everything for both girls, revealing "what darkness was, and is, and how it works, and how it never goes away, or ends." When they meet again as adults, it's in the high-stakes world of a laboratory, and they are competing not only against one another but also against the gendered stereotypes that exist in such a male-dominated setting. Abbott has long excelled at taking an unflinching look at driven young women, and the lengths they'll go to in order to succeed, and the costs of achieving their goals, but Give Me Your Hand enters new territory in the way in which it explores the unmanageable weight of shared secrets, and the burden of feeling complicit in another's actions. It is a book filled with blood and intimacy; though set against a seemingly sterile environment, it becomes clear that life and death cannot be so easily contained.

Below, I speak with Abbott about Give Me Your Hand, what is so fascinating—and threatening—about ambitious women, and what, if anything, scares her.

You write about really intense situations having to with wild ambition and incredibly driven women, the kind for whom little is intimidating, which often gets them into objectively scary situations. So, I wanted to know what, if anything, scares you?

I generally write about things that scare me. If they feel scary to me, then that will vibrate through somehow to the readers. So, I suppose I don't think consciously when I start writing books about this stuff, but, now I'm thinking, it is so interesting how much of the book comes from different experiences of being an ambitious woman in, let's say, male-dominated workplaces or male-dominated businesses, and what that involves and how much that's involved historically for women—including the last six months. [For women to succeed, it has been] about not saying things, putting on masks, figuring out how to hide your ambition, and not to intimidate. What is the cost of that? And what kind of rage can build because of that over time? I think, because I was writing [Give Me Your Hand] during the presidential campaign, I think it was all bubbling in there somehow... It feels like it was all in there, the female body and how males fear the female body.

It was really interesting reading a book set from the women's perspective in such a male-dominated world, and an interesting change from some of your previous novels, which were set in traditionally female-oriented worlds, like cheerleading and gymnastics. But with this, it was easier to see how much the women who were in that world had internalized the misogyny of it, including feelings of competition between each other, as if there were only space for one woman, but never two, among the less competent men.

It's so satisfying to write. We do get used to the system that we are caught in the gears of... It all feels like what happens in a Lord of the Flies kind of environment. But it's also always highly gendered.

Your novels are great reminders of how ambition is still seen as so gendered, and how that holds women back in so many ways, sort of perverting our desires, because, in order to be successful, we're also told that we need to abandon other ideas of who we are supposed to be. And then we're just seen as ambitious drones.

Yeah, right. It's like the idea of the worker bee persona, which I think so many women [are perceived as] at work. But we also do have to work harder, because we're female. So it's actually true that we're very heavily nailed down to [this perception]. And our success is either attributed to, well, they had to promote one woman or they just gave it to the one works all the time. I've never seen the worker bee term applied to a man, ever. So, even the language gets gendered.

And really, it's so interesting when you think about that, because aren't worker bees—like, the actual bees—male? They're all just serving...

A queen! Right, of course, yes.

But we just can't deal with that. So we have to completely change it to fit our sexist narrative... not that there isn't a queen bee in this novel, because there is. In fact, one thing that I really loved about this was there were so many different kinds of incredibly accomplished women in this novel who are depicted in different ways, and we got to see that an ambitious woman or a successful woman doesn't only look one way.

I didn't want to suggest that ambition was malignant. So it was really important to me that we had this range and that Kit is brilliant and Dr. Severin's brilliant, and there are many different forms. And for some women like Dr. Severin, it's really important to her to be a mentor and when she has the power to use it, to bring women up. So, I'm glad for her, and also that she would be sort of sexy, and appealing, and mysterious, and all these things too.

Yeah, definitely. She was very sexy and has a great name.

She gave me an excuse to research a lot of vaguely S&M clothes, like stiletto heels. I guess it's another object of torture for women that we have taken on.

Where did your original idea for this novel come from?

The original idea was so small. I had read this magazine article about this true con, and a tiny piece of the story was that a teenage girl confessed to another teenage girl this crime she committed and that the person heard the confession. The kid was so haunted by; it sort of ruined her life for the next few years, she didn't know what to do with the information. And it's not so much about confessions, but secrets, that the person telling them feels better, but the person who has to take it feels worse. And I wanted to put them in a competitive environment, and I'd done a lot of sports, so I didn't want to go down that road again. And I was thinking that women scientists are such a minority, and I started reading things about that, and then I became fascinated with premenstrual dysphoric disorder, and it all kind of came together from there.

It also made me think a lot about this other power dynamic that women experience—sometimes with other women, and sometimes with men—where we're forced to keep secrets in order to maintain an equilibrium, and it destroys us, because we feel complicit in something that we never asked to be a part of.

Have you seen that comedy special, Nanette? That Hannah Gadsby comedy special that's just on Netflix? She talks about toxic masculinity, and it's all very interesting and it's great, but one of the things that she talks about are the secrets that women keep because you don't want to destroy a man's life, for instance. We've heard a lot about in the #MeToo movement where no one's really thinking about what it means for the woman who has to keep that secret to keep it. I think female silence is obviously on all on our minds lately, and complicity, and when to say things and when not. It's been bubbling for a long time.

The person who just popped into mind with secrets is Monica Lewinsky, who got shamed in so many different ways back in 1998, but one of the ways in which she was shamed was people asking, "Well, why did she even talk about it? She shouldn't have been talking about it." But that was her story. Women aren't even allowed to tell their own stories if they contained someone else's secrets, lest they ruin that person's life.

Right. That's a great example of one of the things that I started to consider. I was in my 20s when that happened, my early 20s. [My response was:] She shouldn't be in this space, she shouldn't be talking about it, she should be ashamed, she's gonna bring down the presidency, all of this stuff that I'm sort of disgusted and appalled by now.

There are all sorts of ways in which we're progressing, and then in which other people are trying to bring us back into the past. But, there's some progress, at least, or a willingness to talk about the difficult things, which I think you do so well. You really go to the dark places. People do awful things. There's lots of blood. Like, so much blood that it feels like there's the overwash of red throughout it.

Yeah, that's right. [Laughs] It's like they have their own specter of menstruation.

It's fascinating because, with women killers—historically, there's the idea that women kill with poison and in secretive, sneaky ways. And, yet women are also associated with blood, obviously, and the messiness or perceived messiness of the female body. There are so many interesting dynamics at play that subvert our ideas of gender relations to messiness and cleanliness.

There is this notion of the female body being monstrous and full of blood... And it is interesting, because I wrote a lot of the book during the campaign, and there was the Megyn Kelly incident and there was weird, menstrual stuff that emerged in the campaign. It was so uncanny how this is still a kind of horror for the larger culture. Also, I kept looking at these old medical books and there's this quote about how women kill much less frequently, but when they [do],  it's extremely violent. And I read about all these ideas about what female criminality is about, and it always has to be about emotion and out of control emotion, so, I think, I was playing with all of that... This was all on my mind, these serious types of female criminality and how the body plays into that... Once I got into that, I got into it.

Give Me Your Hand is available for purchase July 17.