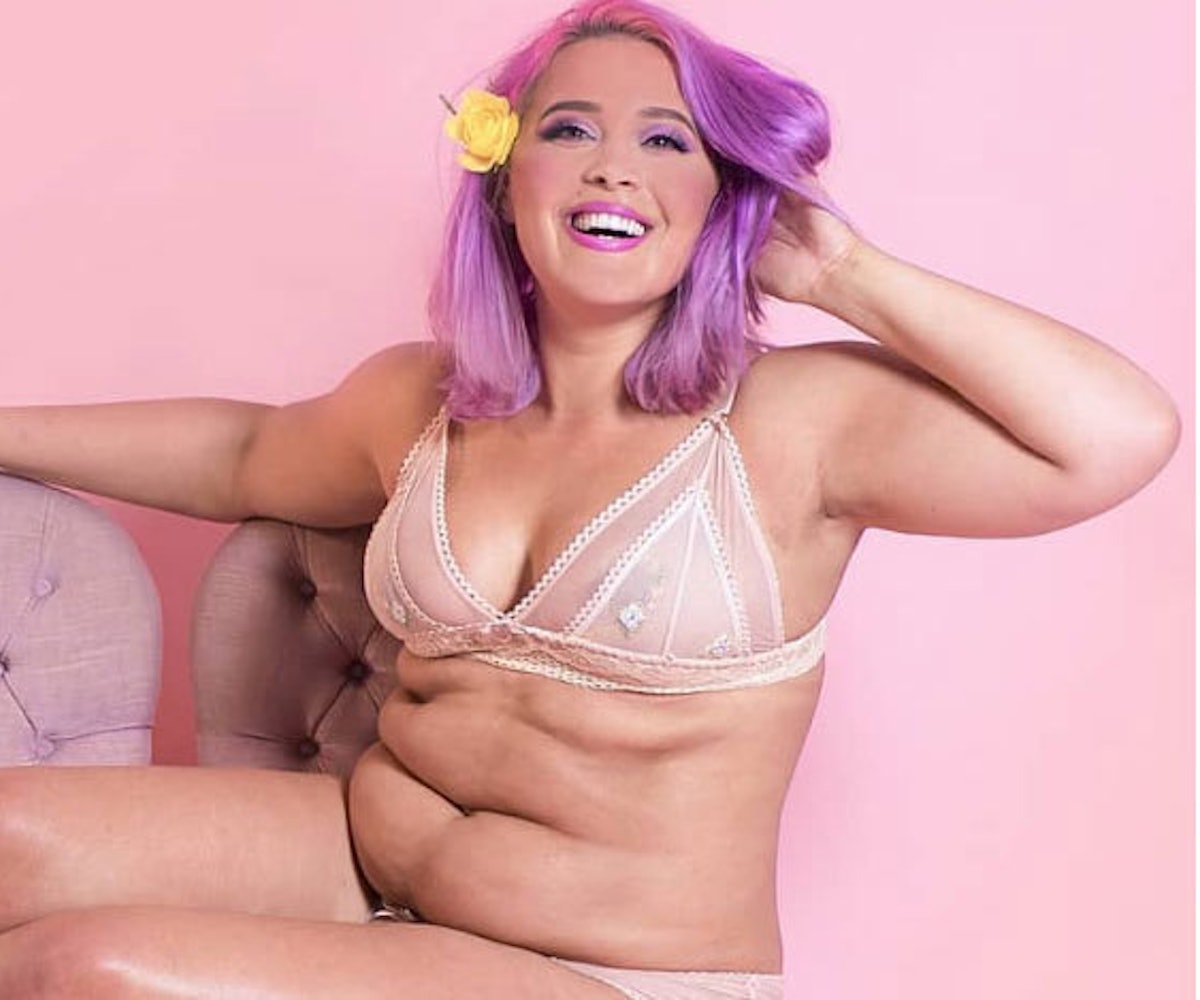 When someone tells you how “thin you look," you know, on some level, this is supposed to be a compliment. That's because an obsession with weight loss and its association with beauty is ingrained in our society. From Photoshopped models to advertisements preaching about the fastest ways to “lose those last 10 pounds," we're bombarded with the toxic message that thinness equals beautiful.

And it's not just about aesthetics: We've also been taught to associate thinness with healthiness; as if happiness can't happen without flat abs and a toned ass. Our Instagram feeds are flooded with images of perfectly poised post-workout bodies beaming with happiness at their “success," while being fat is equated with being a failure. It's hard not to succumb to this kind of messaging, and I know I've spent a large portion of my life vying to hear positive comments about my body, at both my heaviest and lightest weights. But considering how pervasive it is, how can this cycle be stopped?

Megan Jayne Crabbe, or @BodyPosiPanda on Instagram, says that learning to look past the bullshit of the weight loss industry is a process. “The starting point is realizing that you deserve better," she says. Crabbe, a known name in the body positive community, found solace in the space over three years ago when she was recovering from her eating disorder. You've probably seen videos of her dancing around in her underwear to catchy pop songs, videos that remind you that it's okay to have a little jiggle to you. Despite the gleeful image, Crabbe has struggled with body image and battled eating disorders most of her life.

Diagnosed with anorexia nervosa at 14, Crabbe says that she “started eating in a disordered way" when she was 10. She was 65 pounds at her lowest weight and, while lying in a hospital bed, was told she might not make it through the night. She's spent a lot of time in and out of rehab for eating disorders since then. “When I was 16, I was told I was recovered, but really, I was 'weight restored,'" Crabbe says. “I don't think that I truly recovered, or even knew what recovered could be, until I found body positivity when I was 21."

Crabbe created her account in 2015 and, since starting the page, has accumulated over one million followers. She recently wrote a book, Body Positive Power, as a guide for everything she wishes she knew when she was recovering from her eating disorders. Crabbe says that she loved writing about “the reasons why we hate our bodies," stating: “We are not the problem—like that's what I want people to take away. How you feel about your body actually is not your fault—it has never been your fault. We are set up to hate our bodies from the start."

Fat-shaming is something that often happens in places you wouldn't expect, like in the doctor's office. Huffington Post recently reported on the widespread malpractice noting that, frequently, patients who are overweight are met with misdiagnoses of serious conditions, and are too often ridiculed for their size and shamed into unhealthy eating habits or discouraged from seeking medical treatment at all.

Crabbe recommends that anyone facing weight prejudice in the exam room should insist that the focus be brought back to their treatment. “Something I've found really handy to remember, if I go in for an issue that has nothing to do with my weight and [the conversation] gets brought back to weight, is the phrase: 'What treatment would you suggest to someone who came in with this condition who is thin? Can I have that treatment?'"

“Weight prejudice is killing people, and it's important for people to know that they are allowed to demand better," she says. “Even if you don't believe in health at every size, even if you want to stick to what most people believe about fatness, which is that it's unhealthy, we still should work on not dehumanizing fat people when we have these conversations." The discussion about body positivity goes beyond size, she says, and all areas of body positivity should be emphasized in the community. “We have to be intersectional," Crabbe stresses. “We have to also be thinking about other systems of oppression. Racism, ableism, queer-phobia, ageism—like they should all fall under the umbrella of body positivity because they are forms of oppression that people get because of their bodies. Like, it's that simple."

Accepting your body is hard and falling for the #thinspiration and #fitspo accounts flooding your feeds is easy. It's important to remember though that body positivity isn't a one-size-fits-all method, and that it's okay to take the time to learn to love yourself. “If it seems unattainable, that you could never love your body or even accept it, okay, you don't have to force yourself into it, but you can think back. Think about the first time you ever thought your body was wrong," Crabbe urges. “For most of us, it's when you're a child. Did you deserve to feel that way? Abso-fucking-lutely not. You didn't deserve it then, you don't deserve it now, and that's what you need to feel."