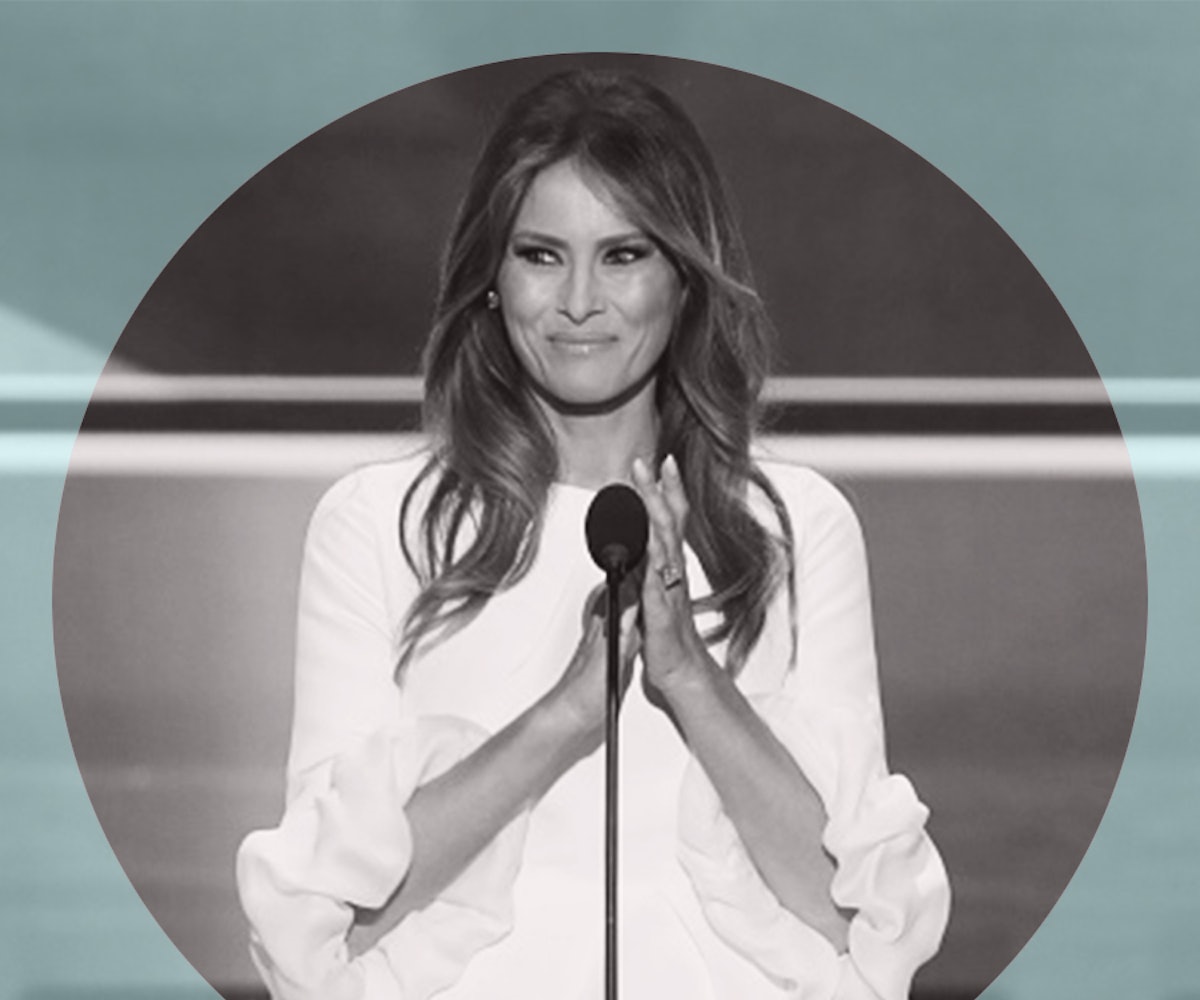 Going into this year’s Republican National Convention, it would have been hard to predict that the single biggest story of this particular political circus would center around candidate Donald Trump’s wife. And yet because Melania Trump’s opening night speech was pretty much immediately called out by journalist Jarett Hill as being identical in some places to the Democratic National Convention speech that Michelle Obama gave in 2008, the potential First Lady—and the ad hoc campaign as a whole—has been placed under the glare of a pretty harsh media spotlight over the last 48 hours as seemingly everyone asks the same question: How on earth did this debacle happen? And: Who’s going to get fired for this?

Well, as of today, we have an answer for both of those questions. Let’s tackle the latter first. On its official website, the Trump campaign released a letter this afternoon from the “in-house staff writer” for the Trump Organization, Meredith McIver, who explains that the plagiarized speech was entirely her fault. McIver writes:

In working with Melania Trump on her recent First Lady speech, we discussed many people who inspired her and messages she wanted to share with the American people. A person she has always liked is Michelle Obama. Over the phone, she read some passages from Mrs. Obama’s speech as examples. I wrote them down and later included some of the phrasing in the draft that ultimately became the final speech. I did not check Mrs. Obama’s speeches. This was my mistake, and I feel terrible for the chaos that I have caused Melania and the Trumps, as well as to Mrs. Obama. No harm was meant.

Obviously, then, this means McIver was summarily let go from the Trump Organization, right? After all, McIver allowed Melania Trump to be dragged over the coals because McIver didn’t think to change what she knew were direct quotes from Michelle Obama’s 2008 Convention speech. This is a termination-level mistake. And isn’t Donald Trump’s whole thing that he likes to fire people? Isn’t that just one of the main reasons Peter Thiel likes him? So, isn’t it safe to assume that McIver’s head would be on the chopping block, even if she had co-written many of Donald Trump’s books with him?

These are all trick questions, of course, because literally nothing about the Trump campaign is obvious other than the way it has exposed the virulent strains of racism, misogyny, and xenophobia which run rampant through our society. But, the point is, McIver was not fired for this enormous offense. As she tells it: "I offered my resignation to Mr. Trump and the Trump family, but they rejected it. Mr. Trump told me that people make innocent mistakes and that we learn and grown from these experiences." Hmm. I'm not sure how innocent a mistake it is to incorporate what you know are Michelle Obama's words into a speech of Melania Trump's, but then McIver is not working for me, and who am I to judge innocence anyway. The bottom line here is, despite the enormity of this snafu, nobody is getting fired for this.

So back to the first question: "How on earth did this debacle happen?"

This is a little bit more complicated. Sure, on a surface-level, if we are to believe McIver, this whole thing happened because Melania Trump was reading McIver some of the most inspirational quotes from a woman she admired. So innocent! Except, of course, that this admirable woman is Michelle Obama, who has been, along with her husband, endlessly disparaged and attacked by Donald Trump and his lackeys. That Trump's wife would choose Michelle Obama as one of the women by whom she is so inspired that she wants to sound, um, exactly like her is kind of shocking—not least because Donald Trump has run an overwhelmingly racist campaign, even collecting endorsements from white supremacists. What kind of obtuse thinking would ever allow Melania Trump to willingly model her public persona after a woman who has been deemed by the Trump camp to be an enemy? Well, the very kind that allows white privilege to perpetuate unabated.

As was immediately called out on Twitter, the theft of black women's work by white women and by the existing power structure at large is nothing new. But the blatancy with which the Trump campaign stole Michelle Obama's words—and not just any words, those used to describe her upbringing and the code by which she raises her own children—and the stubbornness with which they continue to deny that they did anything wrong is disturbing, if typical for the way the Trump campaign has conducted itself throughout this whole process. This is a campaign which has continuously questioned the contributions and values of black Americans to this country, and so for Melania Trump to use Michelle Obama's description of the values of a black American family and claim them as her own is outrageous. This is not simply a case of a speechwriting gaffe made by a political naif, this is a symptom of the disease that is the Trump campaign, one which thrives and replicates itself in an atmosphere of hatred and fear, one which picks at whim what it wants from other people and cultures, and then discards those same individuals and groups once they are no longer needed.

Melania Trump's plagiarism of Michelle Obama matters because stealing from people and cultures which you simultaneously deride and dismiss is not only business as usual for the Trump campaign, rather it is also par for the course for so many people of privilege in this country; or, as Brittney Cooper wrote on Cosmopolitan yesterday: "This is the essence of white privilege—even clear fuckups get explained away and come with little consequence." Melania Trump's plagiarism matters because it—like the Trump campaign as a whole—is a microcosm of everything that's wrong with America, and it's essential that we don't dismiss this as a symptom of the problem; it's evidence of the disease itself, and it's not going away as much as the Trump campaign wants us to ignore it.