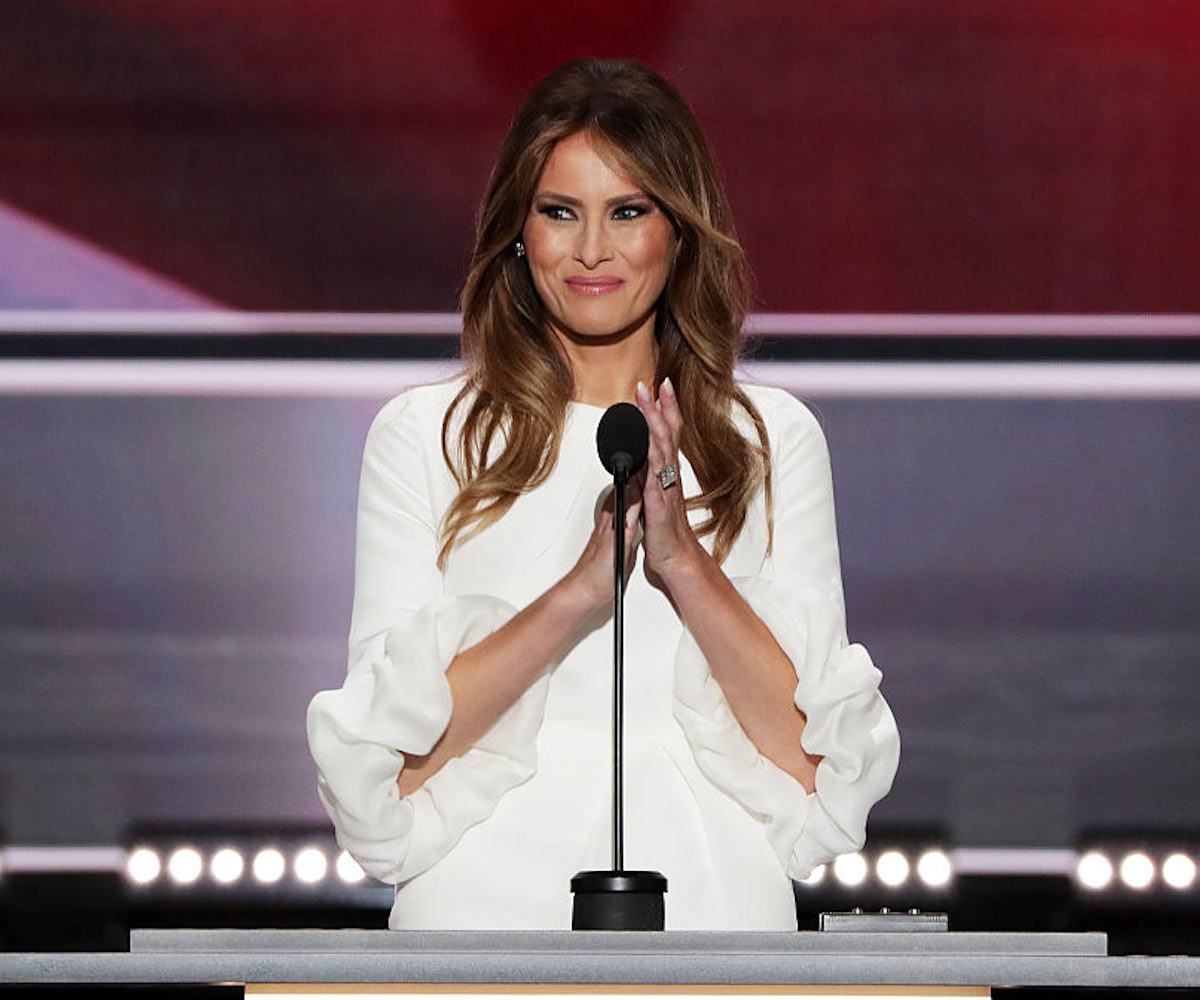 There's never been any question that, much like the personal, the fashionable is political. And it's also been quite clear for some time now that Vogue editor-in-chief, Anna Wintour, had a very specific political bent, and it was a left-leaning one. During the lead-up to the 2016 election, Vogue explicitly supported Hillary Clinton for president in its first endorsement ever. Now, though, Wintour has gone on record with the Wall Street Journal to say that she expects to cover Melania Trump, explaining, "We have a tradition of always covering whoever is the first lady at Vogue and I can’t imagine that this time would be any different."

Of course, for many Americans, this time is different—incredibly so. For many Americans, the election of Donald Trump has been a wake-up call, even for those who had once been politically apathetic or disengaged, perhaps previously comforted by the fact that there wasn't a narcissistic psychopath with stubby fingers constantly poised to unleash catastrophe via Twitter. For many Americans, politics is now a huge part of all cultural experiences, from sports and music to film and fashion. Of course, there's no doubt that politics was always at least present as subtext in all these things, but in our current political climate, there is no room for implied messages—everything feels urgent and explicit.

In the world of fashion, the political has taken center stage for a variety of reasons; designers like Tom Ford have spoken out publicly about their refusal to dress Melania Trump; brands like New Balance, L.L. Bean, and Under Armour, whose executives have come out in support of Trump, have faced immediate condemnation; alternatively, when Nordstrom announced that it would no longer carry the Ivanka Trump brand, Donald Trump condemned the company on Twitter, only to see Nordstrom's stock price rise in the aftermath of the social media attack. Calls for boycotts have been omnipresent the last few months, as anti-Trump Americans have realized that, in our staunchly capitalist society, putting your money where your mouth is has a tangible effect; consumers have real power, and brands will listen if people stop buying.

And so: fashion magazines. One of the most interesting developments of the last few months is the way in which media and the power of the press have firmly become the targets. Not a day goes by without Donald Trump decrying the unfair treatment he gets at the hands of "fake news" outlets like, um, the "failing" New York Times. Beyond that, his entire administration is simultaneously working to marginalize and court prominent news organizations, by refusing to take questions at press conferences, and yet actively attempting to engage with them by visiting their offices with attendant pomp and circumstance.

But while there was never any doubt that publications like the Times or the Washington Post would have contentious relationships with the Trump administration, what's been so fascinating to see is the rise of critical coverage in outlets like Teen Vogue, which has been roundly, even breathlessly celebrated for its recent political work. In fact, enter "Teen Vogue" as a search term on Twitter and hundreds of tweets praising the publication for not just having good political coverage, but having the actual best of all the media, come up.

While we think that Teen Vogue's political coverage is excellent (in particular, its reported pieces, like this interview with Maxine Waters, or editorials, like this one by a pro-abortion priest), we also can't help but think that much of the praise Teen Vogue is getting is hyperbolic. The fact is, the majority of its political coverage is opinion-based and simple aggregation; most on-the-ground political reporting is still done by major news-oriented publications like the Times and others. And this is fine! This isn't a bad thing about Teen Vogue, but it is an important thing to recognize when praising an outlet as being a political trailblazer and postulating that it will break the Donald Trump administration's version of the Watergate story. And then, also, there's the fact that while Teen Vogue is a powerful example of fashion media doing political reportage, it is not the first such publication to be doing so—not by a long shot—nor is it the only one to be doing so right now.

Recently, this exact issue came up on Twitter and was handled beautifully by Phillip Picardi, the digital editorial director at Teen Vogue. As seen in the tweet above, following someone's assertion that magazines like Elle and Marie Claire focus only on fashion, while Teen Vogue is staffed by the Resistance, Picardi released a statement in which he thanked the Twitter user for her support, but also praised Elle and Marie Claire for their political coverage and made sure to point out that Teen Vogue still writes a lot about fashion, which is fine! It's fine because "writing about fashion or being interested in fashion, does not preclude anybody from being concerned or informed about what's going on in our country."

Picardi is absolutely right, of course. Fashion media has never been an either/or proposition, and it certainly isn't now. But one thing Picardi doesn't mention in his statement is that there is more than just a moral obligation right now for fashion magazines to write about politics—there is an economic one. Much in the same way that American consumers are using their buying power to send a message to companies like Nordstrom and New Balance, they can use their clicking power to only visit media outlets which reflect their political views. And because the majority of young Americans are more liberal than their older counterparts (remember all those election maps showing how badly Donald Trump would have lost if only millennials voted? Sigh, us too), and the majority of women are more liberal than men, it only makes sense that fashion media, particularly that which is directed toward young women, would get political now, at a time when political engagement and activism is seen as a desirable—and marketable—attribute.

This is not to say that the people writing and editing the political articles which are now all over Teen Vogue (and NYLON!) are only doing so because of the financial possibilities; I can only speak to political coverage that I have personally written for this very site when I say that my writing motivations are driven by my personal beliefs and attitudes, but I would assume that such is the case for many young women writers who are covering politics for similar outlets. However, there is no doubt that if this type of political coverage wasn't well-received by large audiences, it wouldn't be as welcome. There is, as Tavi Gevinson noted in a tweet in December, still a need to treat this all with "a healthy dose of skepticism."

All of which brings us back to Melania Trump and her presumptive coverage in future issues of Vogue. There is no doubt that Wintour would rather still be covering Clinton, but, clearly, Wintour thinks there will be a financial benefit in covering Melania in future issues, and that Melania's presence in Vogue's pages will appeal to a broad enough cross section of its readers that it will be worth any inherent moral compromise. And perhaps this is true for Vogue. But perhaps it is also true that if enough Vogue readers voice their concerns about such coverage, and explain that they are not interested in buying a magazine with Melania Trump inside—or, even, on the cover—that Wintour will give the choice a second thought.