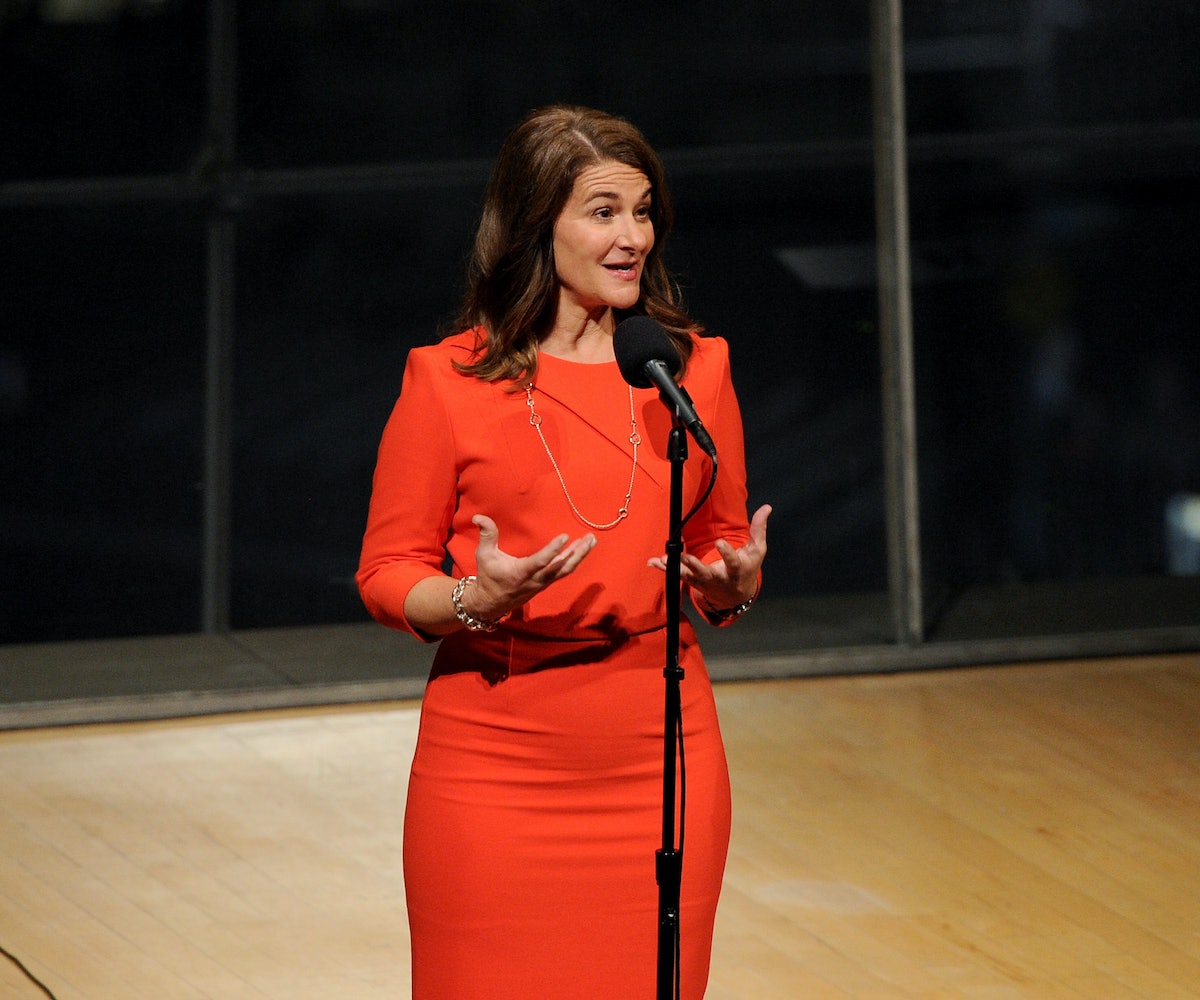 It only took a few days in office for President Trump to make a significant attack on women's health around the world. On January 23 he signed the almost impressively retrogressive "Global Gag Rule," a move that would require foreign non-governmental organizations to certify that they will not “perform or actively promote abortion as a method of family planning” in order to receive government aid. The move was widely criticized be women's rights activists and politicians alike. Similarly, Trump has promised to defund Planned Parenthood and has appointed a Supreme Court judge who will most likely stand against a woman's right to choose.

Now, picking up where Trump left ruin, unexpected feminist hero Melinda Gates continues to make good on her pledge to provide contraception options to 120 million women between now and 2020, according to Allure. The promise was officially made back in 2012.

"In the decade and a half since Bill and I started our foundation, I’ve heard from women all over the world about how important contraceptives are to their ability to take charge of their futures," she wrote. "When women are able to plan their pregnancies around their goals for themselves and their families, they are also better able to finish their education, earn an income, and fully participate in their communities."

"The decision about whether and when to get pregnant was a decision that Bill and I made based on what was right for me and what was right for our family—and that’s something I feel lucky about," she continued. "There are still over 225 million women around the world who don’t have access to the modern contraceptives they need to make these decisions for themselves."

In a 2012 interview with The New York Times, Gates explained her philosophy about birth control more thoroughly: "If you allow a woman—if you counsel her so it’s truly voluntary—to have a contraceptive tool and she can space those births, it unlocks the cycle of poverty for her. In the early days, I’d be out traveling for the foundation, I’d be there to talk to women about vaccines, I’m going be frank, for their children, and what they would say to me is: ‘Okay, I have questions for you. What about that contraceptive, how come I can’t get it anymore?’ To me, it’s one of the greatest injustices."

The Daily Dot notes that Gates is a long way from meeting her “ambitious but achievable goal.” From 2012 until now, Gates has managed to reach 24 million families. That's wonderful—but not exactly close to 120 million, and she's only got 3 years left to accomplish what she had originally set out to do. Trump's recent moves may serve as an important motivation for renewing the vigor of this project.

Meanwhile, Melinda's husband Bill has been meeting with Trump about the future of technology in America. Back in December, Bill had controversially compared Trump to JFK, saying that he thinks "whether it's education or stopping epidemics... [or] in this energy space, there can be a very upbeat message that [Trump's] administration [is] going to organize things, get rid of regulatory barriers, and have American leadership through innovation."

If you're interested in protecting women's health, you can donate to Planned Parenthood yourself over here.