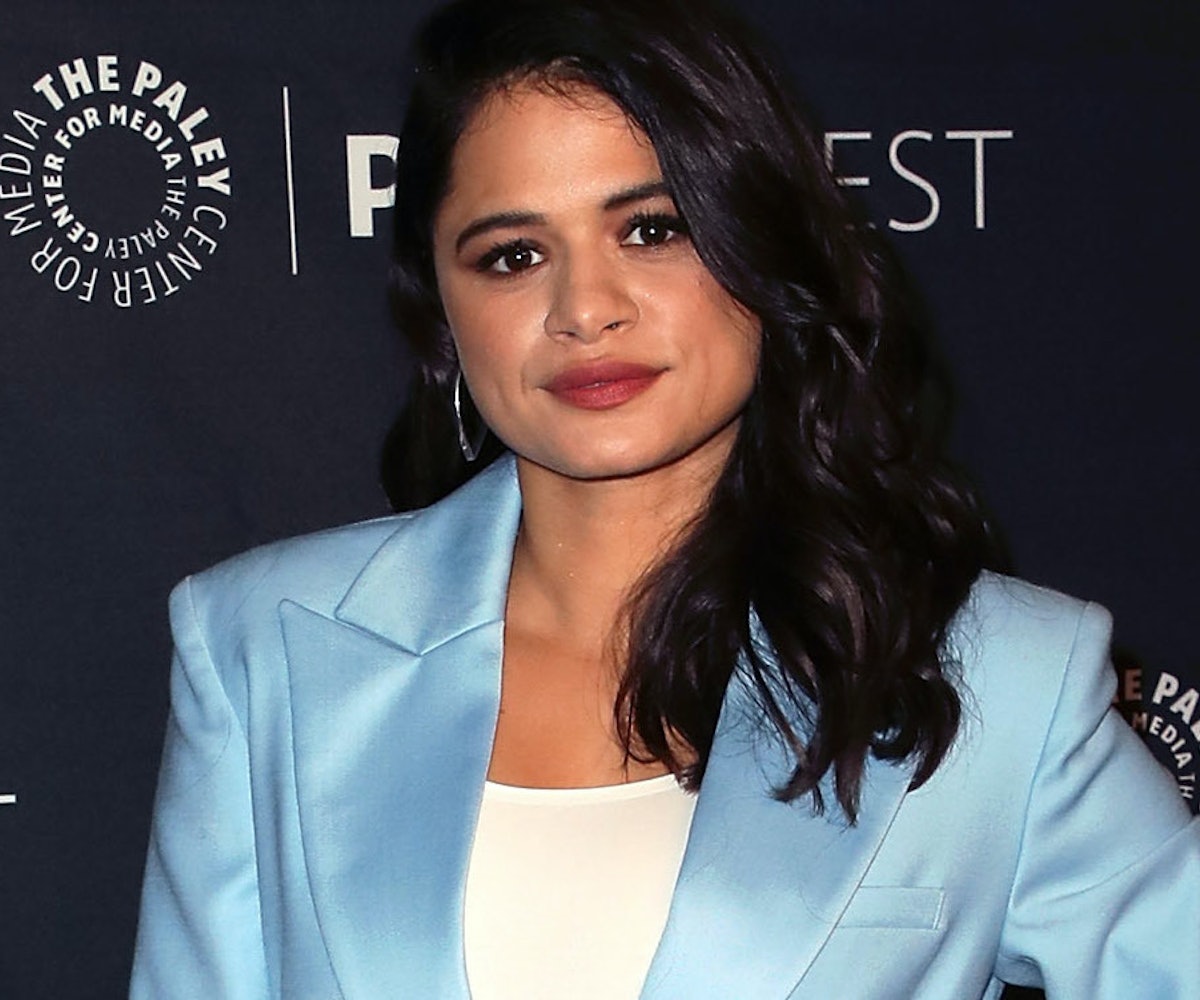 Ask almost any child of the early aughts what TV show was most important to them, and you'll likely hear Charmed come up at least once or twice. The show, which aired on the WB from 1998 to 2006, told the story of three powerful witch sisters destined to protect innocents from looming evil. And while it was forward-thinking and feminist, it wasn't particularly progressive in terms of racial or cultural diversity. So what would it have looked like if it had paid attention to intersectionality? Enter the CW's Charmed reboot.

The new Charmed is focused on the Vera sisters, activist Mel (Melonie Diaz) and college student Maggie (Sarah Jeffrey), who discover that they have a secret half-sister named Macy (Madeleine Mantock) shortly after their mother is mysteriously murdered by a demonic force. After moving in together, they begin to discover their individual powers, which had been previously bound by their mother so that her daughters could lead normal lives. However, as the sisters' "whitelighter," or witch guide, tells them, their mother was in the process of releasing their powers on the night she was murdered—leading the sisters to suspect that something supernaturally sinister is afoot.

From the get-go, the reboot has made it clear that it's very different from the original Charmed series—not just in terms of the show's premise, but also in terms of subject matter and its focus on representation. In fact, Diaz, a vocal activist herself, cites the reboot's goal of amplifying hefty sociopolitical discussions via "entertaining" stories about sisterhood and empowerment as a big reason why she felt good signing onto the project.

"There's a lot to be angry about," Diaz said before praising her character's "bold" and "brash" personality. "It feels good playing characters that [feel like] a lot of my friends. They're doing this in real life." In honor of the show's premiere, we spoke to Diaz about portraying an activist, her thoughts on the POC reboot debate, and the importance of Mel's normalized sexuality. Read our Q&A with Diaz, below.

What was the process of getting involved with Charmed like?

I was skeptical because it was such a big entity and show—it's a really big property. But I knew that [producer Jennie Snyder Urman was involved, and] I'm the biggest fan of Jane the Virgin. So I wanted to sit down with the creators, and kind of just talk to them about the show. We have similar beliefs about a lot of things. Ultimately, I just really liked this group of people, and I think it's really important for you to like who you're working with.

Also, their vision for the show—I thought it was a really clever, unique way to kind of modernize this big show. We hit it off, and I left [the meeting]. I called my manager, and I was like, "That went really well. I really like them." Then she was like, "Oh my god, they already called…” Often, you have these meetings, and you don't really know [how it went]. But this was just an instantaneous connection. I just felt really confident that these people are going to really just make this show in a really cool way.

Was it intimidating to be tasked with a revamp of such a beloved franchise?

No. It wasn't intimidating like that, because they kind of pitched the show as a very different thing. It would be borrowing the same mythology, but they made it very clear that we were three different sisters, with different journeys. Also, it's not really healthy to bear that kind of responsibility.

What did you think about playing an activist on the show? Taking that piece of your real life to the screen?

I've been really upset about current events, as a lot of people are. I found it therapeutic. One of the reasons why I really wanted to play this part was because I like women who are unapologetic. Mel's very… she's angry. And that's okay. She's supposed to be. There's a lot to be angry about. She's bold, and she's kind of brash. It feels good playing characters that like… a lot of my friends, they're doing this in real life. I know it's just a television version, but it makes me feel good that at least we're writing characters like this.

It's a great step. However, there have been some people online who are insinuating that this could be another attempt by a big network to capitalize on the rhetoric of social justice. How would you respond to this criticism?

I feel like that's just so unfair. [On one hand], if you don't talk about it, you don't care. But if you do make attempts to at least start a conversation, you're abusing it. So, it's like, what do you want?

It's so strange to me. I feel like our intentions are to make a good show that talks about important topics, without hitting you over the head. Not every one of our episodes is going to be about social justice, but that's a big part of what we want to do: to talk about real things in a really funny way. Like, there's a scene where they're protesting, and Mel's kind of like snidely quipping about certain things. We just made sure that she was just very loud, unapologetic, and strong. That was really important to me.

It's frustrating though, because, at the same time, we're very… like, I'm very involved in politics. I'm deeply concerned about the state of America right now. It's not good. We're not doing well. I wouldn't abuse that to get ratings. But if I can, in any way, come to work and talk about that—to be on network television where your audience is so massive—why not? Why not take a stab at it? Why not start talking about it? I think it matters.

So to you, this is kind of the best of both worlds?

Yeah. I think I was nervous, but, at the same time, I was also really excited. I was like, "What an amazing platform." You have three women of color, who are sisters, who are complicated, who are all very different. I hope that little girls can tune in and be like, "Oh my god. I'm a Mel. I'm a Macy. I'm a Maggie." You know? I didn't have little characters like that to look at when I was younger.

There's also the argument that, while there's a wave of racial diversity on television, the majority of it seems to be coming in the form of reboots. How do you think we can get more original content for people of color?

I very much want that. I have a lot of friends who are very talented, who are very creative, who have great original ideas. I want them to have a voice more than anything else. I really just feel like because the nature of Hollywood [is that] everything comes in waves. I think there will be an original content stage. I very much believe that we do need that though. I'm not going to sweep that under the rug and be like, "No. It's whatever."

I'm not sure why everyone's kind of, like, gravitating toward the reboot thing. What I can say, is that I think it's the right time to reboot our show. It just felt like the perfect timing for it. I know that Jennie and Amy [Rardin], our creators, have been working on this for years, and years, and years. Trying to get it right. Or, the network has, up until this moment, not felt like it was really right to put it out there again. It just makes sense. This idea of, like, sisterhood and being stronger together—fighting the darkness with your sisterhood. That to me is really cool and what we need right now.

Aside from the racial diversity of this reboot though, I thought the fact that your character is also gay was pretty cool. Talk about true intersectionality.

Yeah, and a lot of people have been asking about that. We also have made the decision, not to ever talk about her being gay. Ever. It shouldn't be a headline. It shouldn't be a topic. Who she loves is who she loves. It should be as natural as day. You know? Her sexuality is a part of who she is, but it's not everything. She's a sister, she's a human being, she's a witch that's trying to do good things. Her girlfriend is just her girlfriend. Just like, a guy would have a girlfriend. We're really trying to normalize it, because I think, too often, we make a thing out of it. It's like, "No, there are gay and lesbian people in this world. They are human beings." And that's it.

We should really be at the point where tokenized queer representation isn't a thing.

Yeah. It's like, if you're queer, then you're edgy, or something like that—pushing the boundaries of television. I'm like, "No, I bet you know like, 20,000 gay people." It's just so weird to me, so I am glad that we're not talking about it at all.

But what I really love in our show is that… I can't really talk about it, but you'll see that her mom and her sisters always supported her choices, and never made her question it or feel weird about it. It was never an issue. I think that when you show families that are really, fully supportive of you, you can do big things. I think that's why Mel is so confident. She's always had the support of her family.

Charmed airs Sundays on the CW.