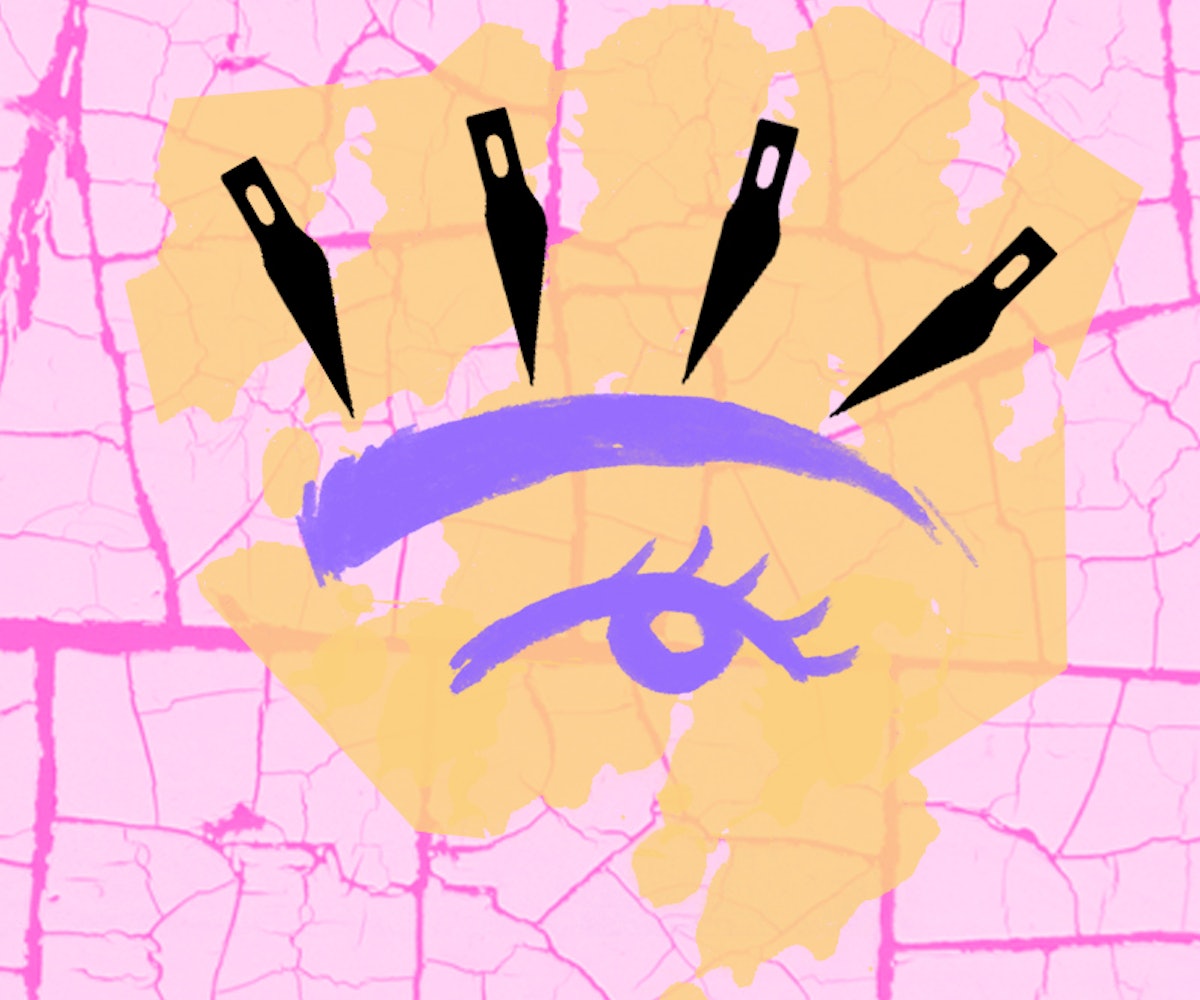 I've been filling in my eyebrows for my entire postpubescent life. My mom—the quintessential "low maintenance" beauty connoisseur—taught me to splurge on two things: a good dermatologist and an excellent brow aesthetician. I was 12 years old when she first dragged me to a waxing table, and I've never looked back. As I've grown and gone through various phases of making up my face, defined brows have always been my single unwavering beauty non-negotiable.

But more than a decade of fastidious eyebrow grooming has taken its inevitable toll, and while I can pencil and powder with the best of them, in terms of natural hair growth, I don't have very much left to work with anymore. I started an ongoing attempt to “grow out" my eyebrows several years ago when the full, almost wildly unkempt look first began dominating magazines and ads. I've tried oils, serums, Latisse, tossing out my tweezers, and candlelit vigils at my Cara Delevingne shrine, all with little to no effect. I'd reached my ultimate natural eyebrow plateau.

Left: my natural brows, no makeup, right before the procedure. Right: before my first consultation with Nicoleta. This was my "everyday" brow look. It took anywhere from 5 to 10 minutes to achieve and incorporated a combination of pencil, powder, and gel.

But I live in L.A., and here “being natural" is for sissies, so I started researching alternative eyebrow solutions. That's when I stumbled upon microblading. Microblading is a meticulous tattooing process available to anyone looking for a semi-permanent solution to sparse brows. A small blade is used to deposit ink throughout the brow area, in the upper layers of skin, resulting in a natural-looking filler that lasts anywhere from one to three years. It seemed like the best answer for someone like me, whose eyebrows ruled everything around them but refused to grow. But considering I don't even have a body tattoo, a face tattoo (semi-permanent or not) seemed like too big of a commitment to stomach. That is until I met Nicoleta.

Nicoleta Palmer, or “The Eyebrows Queen" as she is known to her 12k+ Instagram followers and legion of loyal fans (Kristin Cavallari and Sienna Miller among them), is an eyebrow and permanent makeup specialist based at Brighton Salon in Beverly Hills. Tired of the daily ritual of filling and fluffing, and after pouring over pages of before and after pictures on the internet, I made a consultation appointment.

All my concerns melted away within two minutes of meeting Nicoleta. She took me back to her work area where I bombarded her with a tirade of questions about the procedure. She politely answered one before putting her hand up, cutting me off mid-sentence, and saying “I'm sorry but... you have two different eyebrows right now, can I fix them?" Sure I was caught off guard, but I appreciate a woman with that kind of confidence in her ability, so I agreed. After 10 minutes of tweezing, she handed me a mirror and, oh my god, she was right: I DID have two different eyebrows, a point I only noticed in retrospect, now that I was staring at a perfectly symmetrical pair. This was the final bit of convincing I needed—if this was what she could do with my natural brows, I could only imagine what results a microblade would render. I booked an appointment for the full procedure right then and there.

Two weeks later, I was back at Brighton Salon, fresh-faced and ready for my permanently perfect eyebrows. Nicoleta began by smearing numbing cream across my brows, meant to mitigate pain during the procedure. After letting it sit for 30 minutes, she moved on to step two: choosing the ink color she'd be using to tattoo me. For the first round of the procedure (there can be as many as three touch-up visits), Nicoleta tries to match the shade to a client's natural hair and skin color profile as closely as possible. Nicoleta said that often women come in asking her for black or dark eyebrows when it's clear that their natural coloring is anything but. She refuses to tattoo jet black on anyone because it looks too unnatural (“like a sharpie"), and suggests that all her clients start out on the lighter end of the color spectrum because while it's easy to add a darker color at a later date, lightening is far more difficult. She only needed to show me one color—it was a perfect match—and then went to work.

Be honest, when you first read “eyebrow tattoo," did the image of a big scary tattoo gun flash through your mind? If so, we'd both been wrong. A microblading tool isn't attached to any kind of motor and instead looks like a very thin X-Acto knife. Nicoleta dipped the teeny-tiny blade into the ink she had chosen, then used the blade to deposit the ink into my skin via tiny cuts. If that sounds painful…. it was. But not terribly! It was pain akin to a particularly bad tweezing session—you know, when your skin is especially sensitive, and you can acutely feel every single hair being ripped out one by one? Fist-clenching and teeth-gritting pain for sure, but not quite crying pain.

After about 45 minutes of blading, Nicoleta announced she was done for that session. My skin had started becoming irritated, and she didn't want to deposit ink on skin that might be stretched or swollen beyond its natural state, potentially resulting in uneven lines. She handed me the mirror, and I lost my cool. My procedure was on a Saturday afternoon, and I hadn't made any plans for the night because I assumed I was going to be a red, swollen monster. Quite the contrary—I looked AMAZING. Between my new eyebrows and a complimentary blowout from the salon (thanks, Brighton, you rock), I was ready to take on the world.

My brows immediately following the procedure.

Or was I? I'd read online that you couldn't get your eyebrows wet for 10 days following the procedure. Nicoleta rebuffed this with a scoff, telling me I could still wash my face, or in her words, “live my life!" I was instructed to keep my eyebrows constantly moisturized by applying Aquaphor in the morning and at night, and I tried avoiding my eyebrows as best as possible when washing my face for the first week, just to be safe. I wasn't allowed to go tanning or swimming, wear makeup, or workout (sweating opens the pores which may cause the color to fade) for seven to ten days, but otherwise, aftercare was basically naught.

For the first few days, my new brows looked slightly red-tinged. Nicoleta had warned me that this was to be expected: the reddish hue was from my irritated skin and not the ink itself. By day five, it had faded, and my eyebrows were just dark brown (but still looking totally on fleek). Each day my brows got progressively lighter, and by day six, they'd settled on their current shade—which is perfectly matched to my hair color, giving the illusion that they're naturally full. I'm now on day 10, at the official end of the healing period, and I couldn't be happier with the results. I REALLY DO WAKE UP LIKE THIS!

At $1,200 to $1,500 for a full procedure (which includes a consultation, first session, and anywhere from one to three touch ups at one-month increments after that), microblading might not be the best beauty option for a girl on a tight budget. But if you're an eyebrow aficionado willing to splurge a bit, I can't recommend it more highly. While we were chatting mid-procedure, Nicoleta mentioned that one of the most common responses she hears from clients is “Why didn't I do this sooner?!"

10 days after the procedure (day 10 is the last "official" day of the healing period). No makeup.

The first thing I said to her when she revealed my new brows? (Well, after "Holy shit!")

Editor's note: Since this article's publish date, Palmer opened her own salon, Brow Philosophy, and can be found at 860 Via De La Paz, Pacific Palisades, California.