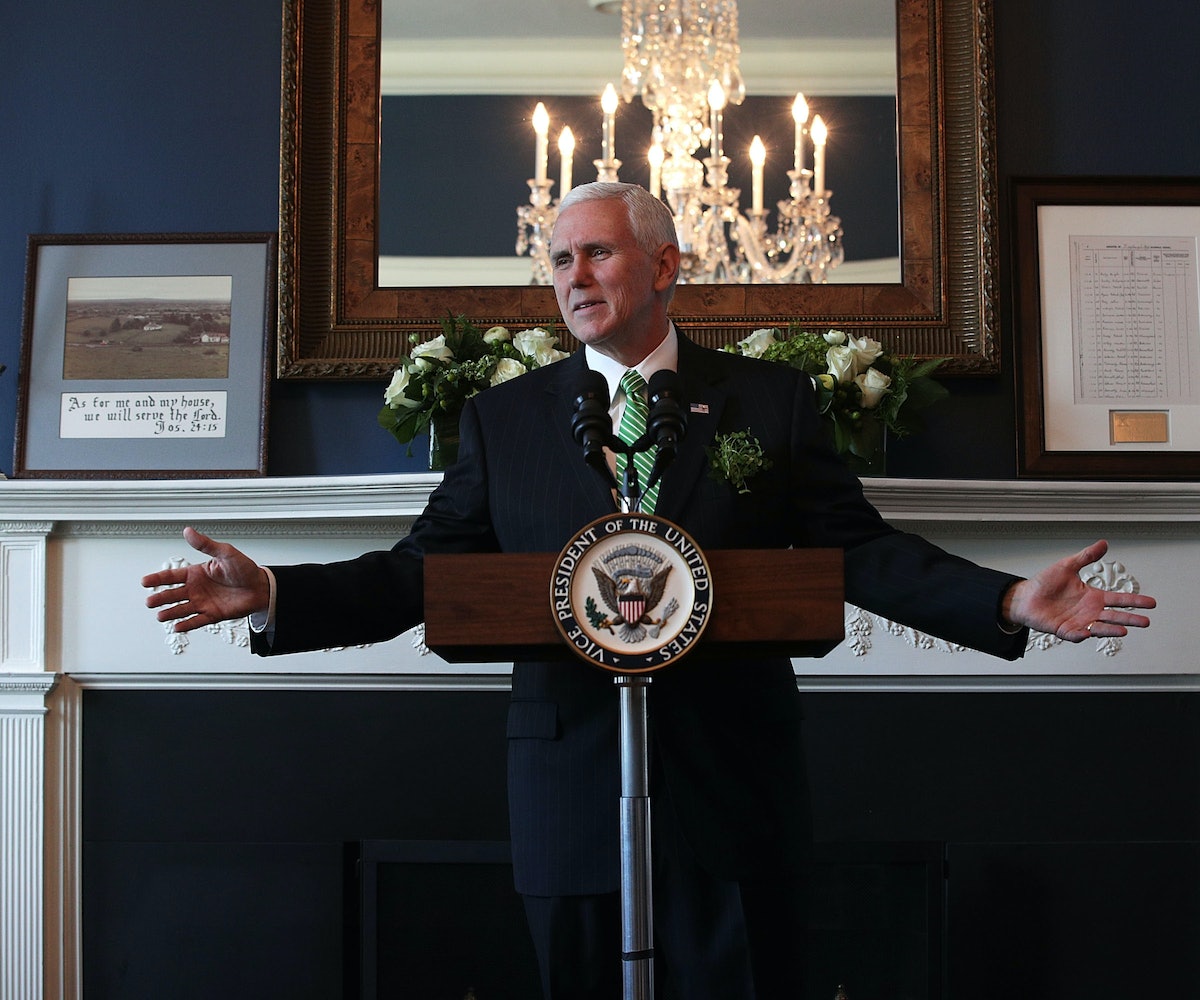 Vice President Mike Pence is dangerous to women's rights. On March 22, however, he will be given the first-ever Working for Women Award at the Independent Women’s Forum’s (IWF) Women Making History reception in Washington. Excuse me, what?

The news came in a press release. "The award recognizes an individual who values free markets, works to create a more dynamic and innovative work world, and celebrates the valuable contributions women make to society," it says. Clearly, the IWF bats for the GOP, but the irony in choosing Pence, specifically, to receive this award is still massive and wildly troubling.

Pence is a man who's effort "to create a more dynamic and innovative work world" involved signing the Religious Freedom Restoration Act, which allows businesses to discriminate aginst LGBTQ+ employees and patrons, even going as far as not hiring someone based on their sexual and gender identity. How is that pro-women, exactly? Is the IWF even aware that not all women are straight, cis women? It seems doubtful. And how can Pence be awarded the Working For Women Award when he has literally said, "I long for the day that Roe v. Wade is sent to the ash heap of history"?

Pence does not work for women. He works against them. In March 2016, when Pence was still governor of Indiana, he signed House Bill 1337 into action. It's a bill so anti-abortion, even some Republican government officials voiced their concern. HB 1337 allows doctors to refuse to perform abortions on women seeking them "solely because of: (1) the race, color, national origin, ancestry, or sex of the fetus; or (2) a diagnosis or potential diagnosis of the fetus having Down syndrome or any other disability." Basically, it polices a woman's choice for having an abortion. It is also a scare tactic and meant to instigate guilt; under the bill, women looking to have an abortion are required to have an ultrasound and listen to the heartbeat. If they do decide to go through with the procedure—if the doctor will even perform one—they then have to pay for a mandatory cremation and burial service. Pence also co-sponsored a bill that sought to deny abortions to women who would otherwise die from pregnancy complications and only allow federal funds to be used for an abortion conceived under "forcible rape" conditions. Yep, Vice President Pence looked to redefine rape. That's how "pro-women" he is.

Thankfully, HB 1337 was struck down by a federal judge because it goes against the Supreme Court. But in case you think Pence's awful policies haven't led to any real public health crises, the then-governor of Indiana led the fight to shut down his state's Planned Parenthood locations, which resulted in an HIV outbreak in one Indiana county.

Working for women, you say?  The "ash heap of history" just got dirtier.