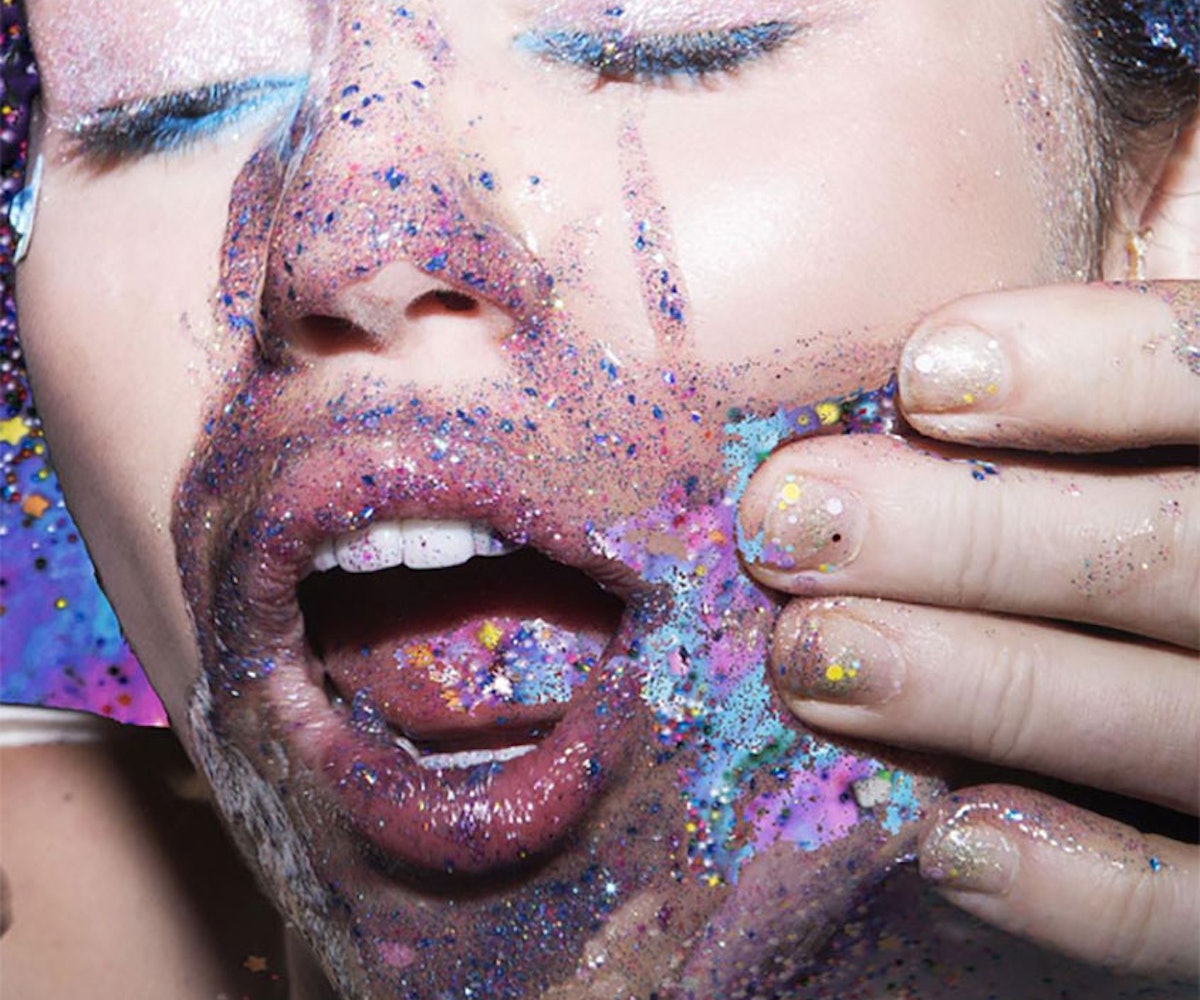 Moreso than any celebrity or pop star, Miley Cyrus' entire adolescence and ascent into adulthood feels like the stereotypical white, American teenage experience—except, at about a billion miles an hour. All the hallmarks of being a teen approaching adulthood have become Miley's stock in trade: Drug use, experimenting with sub-culture, forming and reforming your own political ideologies. Except that her particular experience is magnified, electrified, and broadcast to millions and millions of followers with constant feedback. Her young adult experience is truly hyperbolic, and her extremes seem even moreso. And, in this respect, her rebellion seems most poignant.

But being a teen—which Miley isn't anymore, though she certainly embraces youthful exuberance—is filled with bad decisions. Figuring out who you are often means negotiating with what you aren't, and borrowing other people's cultures and trying them on may feel like fashion when you have the option to take that signifier off at the end of the night. Which is, of course, a problem. Miley received valid criticism for her VMA's performance in 2013 and the subsequent music she released. Last night, plenty on Twitter pointed out that the drag queens from RuPaul's Drag Race came off as mere accessories, once again allowing Miley to borrow from the metaphorical "other" superficially. (Side note: As a diehard RPDR devotee, I have a hard time seeing those powerful, successful queens as accessories, but it is a point worth noting for the populace who isn't screaming at Laganga's death drop.) I wrote, about 2013's "23" collaboration with Mike Will Made It, "Intentional or not, Miley's 'hood' posture...feels disturbingly off-key, especially since no evidence exists to support that she an actual fan of anything other than the cultural currency that a pair of Jordans provides." She's just trying on identities—which, when you are a white woman with exceeding privilege doesn't have the "just bein' Miley" flippancy she wishes it had.

Which brings us to her Dead Petz. The name itself seems to be an adios to childhood, with Miley looking back and taking count of all that she has lost—mostly, relationships and animals. But what she has gained here, thanks to the independence reclamation exercise that was Bangerz, is control over her own career. And as such, if she wants to make a psychedelic indie record with the king of psychedelic indie records and release it on her own terms, then she can. Thus, her next identity: Wayne Coyne protegé.

Diehard Smilers know that Miley and Coyne have been pals for a while, but the average radio listener is going to head to Google to see that Wayne Coyne is the frontman of the famous-but-never-mass band The Flaming Lips. The Lips have had a solid, prolific career, in which Wayne Coyne has led a band of glitter-clad, beach ball-loving misfits through some truly sonic adventures. But Coyne has been doing this for 20 years; perfecting and developing his Oklahoma weirdness, touring and releasing and touring again. So, in many ways, to head back to the teenager metaphor, this is like Miley's freshman year and Wayne has just passed Cyrus a joint of dank bud, and blew her mind by showing her Cronenberg's Naked Lunch inside of her dorm room. (Yes, that was a personal experience.) Which is great for Miley, but...will those weened on "Party In The U.S.A." and "Wrecking Ball" come along for the party? Probably not.

But is it a party worth attending? Well, kind of. It's certainly Miley's most imaginative offering, and while her last album was filled with break-up anthems, this one has loads of falling-in-love ballads. (She addresses a nameless person in "BB Talk," referencing sappy baby talk and a very, very long orgasm.) Songs like "I Forgive Yiew" (aside from being an editor's worst nightmare) strikes a happy balance between Mike Will Made It's production and her hippie vibes (she actually says, "You're lucky I'm doing my yoga, or you might be dead") that feels like the most accurate depiction of the new Miley. "I Get So Scared" is actually a really pretty song about moving on with a dreamy quality unseen in her previous work. And, when teamed up with indie impresario Ariel Pink, "Tiger Dreams" feels like, well, an Ariel Pink song. Which is good if you like Ariel Pink, but that may not be Miley's demographic.

But when you do an album your way, it lacks the benefit of an editor. With 24 songs, it is epically long, and has plenty of forgettable tracks ("Something About Space Dude" sounds quite like the song it precedes, "Space Boots.") However, if Miley has gained one thing by working so closely with Wayne Coyne—the frontman of the band whose Zaireeka required it to be played on four different sound systems—it's how to make an "album," a fully realized story with intertwining sounds. But in today's pop environment, albums don't fare as well as singles—of which there are none here. So, this may be Miley's grandest rebellion yet: A willing, creative, thought-out, and intentional miss.

NEXT UP
Entertainment
Everything We Know About SZA's New Album
Entertainment
RM's "Yun" & 9 Other New Songs Out This Week
Entertainment
NYLON's Favorite Albums Of 2022
Entertainment
Caroline Polachek Announces Album ‘Desire, I Want To Turn Into You’