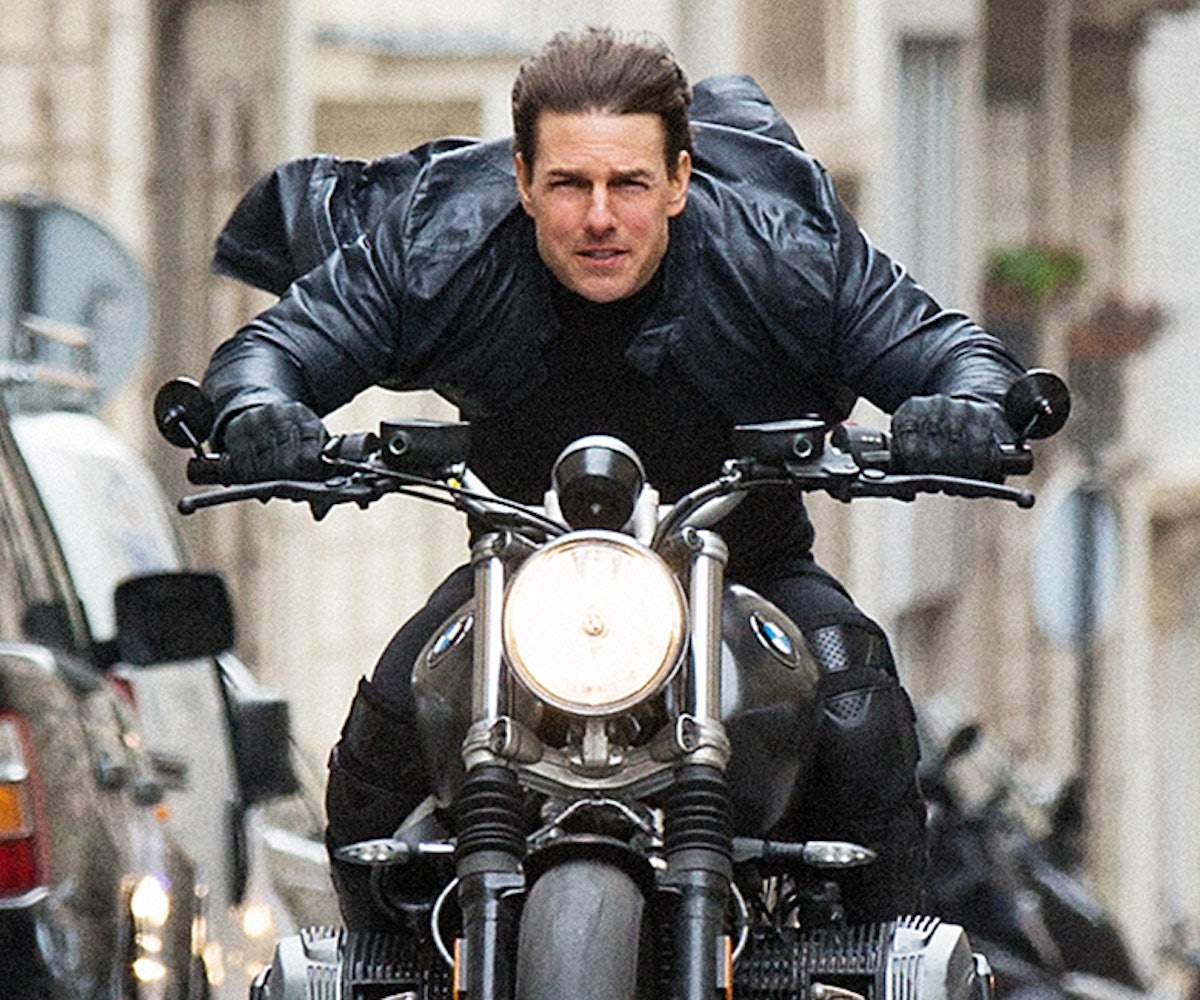 Long before “Lord, grant me the self-confidence of a mediocre white man” became a cutting viral affirmation, there were Tom Cruise movies. Cruise emerged as the slickest of a generation of yuppie-asshole '80s stars—Sheen, Lowe, all those hair-gelled brats whose naked carnivorousness got a cuddly spin from Michael J. Fox as the Young Republican on President Reagan’s favorite TV show, Family Ties. In early Tom Cruise vehicle after early Tom Cruise vehicle, he plays a swaggering hotshot with little formal training or respect for his elders—a maverick, if you will—who bends established hierarchies toward a recognition of his raw talent in dog fighting, pool hustling, flair bartending, stock car racing, the Uniform Code of Military Justice, and, arguably, vampirism.

To this, add helicopter flying and High Altitude Low Opening military parachuting, I suppose. Before the advance screening I attended, of Mission: Impossible—Fallout, writer-director Christopher McQuarrie appeared to do a little hypeman routine, giving an introduction to the film that consisted entirely of a tribute to Cruise’s superhuman dedication to and genius for stunt craft. Cruise broke an ankle during shooting, and somehow healed quickly enough to do the extensive running sequence in the film; for the scene in which Cruise skydives into Paris from an altitude of 25,000 feet, he jumped out of that plane over 100 times, practicing the leap into the perfect spot for the camera; for the sequence in which he pilots a helicopter—when you can see from the dashcam that it’s just him in the cockpit!—he learned to fly a chopper in half the normal time by practicing 16 hours a day with two shifts of instructors! Etcetera, etcetera! All of this, McQuarrie said, “he does for you,” the audience.

This set the tone nicely for a film that stops itself in its tracks every 20 minutes or so in order that another character might give a speech in tribute to Cruise’s character, Ethan Hunt. Over and over again, expository monologues turn to mythologizing Hunt’s superhuman resolve, his idealism, his capability, proven over and over again. “I won’t let you down,” he cries out in anguish, seemingly to mankind at large, and other members of his Impossible Mission Force(!) reaffirm to him that “we need people like you,” so we can all “sleep soundly.” The returning villain from Mission: Impossible—Rogue Nation, played by Ian Curtis from 24 Hour Party People, taunts him over his pathetic “morality” and quixotic “good intentions,” and seemingly every set piece tests Hunt’s resolve to save the world against his compassion for the individuals within it, like the trolley dilemma or an earlier superhero movie, the one where Christopher Reeve spins the world backward on its axis. The very first scene of Fallout reminds us of Cruise’s ill-fated marriage to civilian Michelle Monaghan—they couldn’t be together because his Impossible Missionary work took him on the road so much, and she was a chink in his armor for sadistic terrorist masterminds to exploit, so he made the ultimate sacrifice and set her free. (It turns out, the truly impossible mission… was love.)

All this is a transparent attempt to add gravitas and humanity less to the franchise than to its star. (The way everyone lines up to kiss Cruise’s ring, it’s like he’s the leader of a cult or something.) A shame, as the primary appeal of both the Mission: Impossible films and Cruise in general, with tooth-flashing schoolboy precision of his over-the-top gestures, is the utter inhumanity of it all. The tongue-in-cheek jerry-rigged action sequences and convoluted plotting achieved by Brian De Palma in the first Mission: Impossible film, and Pixar alum Brad Bird in Ghost Protocol, remain the franchise high water marks, though Fallout comes close on the aggregate and contains the single best action sequence of the series, one that leans hard into the sheer, y’know, impossibility of it all.

After a CGI exposition dump reminding Ethan of the events of the last Mission: Impossible film and a lot of international spy intrigue stuff, which an international spy would presumably be already aware of, we’re launched into a quest for stray orbs of plutonium. (Once upon a time, the inciting object in an elaborate globe-trotting thriller was called a MacGuffin, and whatever it actually was, was completely irrelevant to the plot. Now the MacGuffin is always a nuke, and we always have to remember that there are real lives in the balance.) So we’re off to, among other things, a bruising martial arts fight in a bathroom in which Cruise has to locate his target with a smartphone (“Cruise,” you say…), and its continuation in a lounge within a rave that you need a special VIP bracelet to get into; a motorcycle chase across Paris, and a foot chase across the rooftops of London’s St. Paul’s and the Tate Modern; baroque double-crosses, many involving rubber masks, all telegraphed campily and delightfully; and a few new faces to join alongside holdovers Ving Rhames, Simon Pegg, and Rebecca Ferguson: The Crown’s Vanessa Kirby, given star-making close-ups of her voracious facial expressions as a femme fatale socialite-black marketeer, and Henry Cavill, as the CIA’s new-and-improved spy model, definitively proving that a full mustache and week’s stubble is the ultimate facial hair.

The film was shot on 35mm except for the two major IMAX sequences, for which Cruise evidently added to his particular set of skills, and they’re impressively staged by McQuarrie to minimize the impression of digital cheats. Here, the film’s fealty to its star’s ego works briefly to restore a sense of disbelief to blockbuster filmmaking.

I did not detect a lot of CG beauty work done on the celluloid portions of the film—on the large IMAX screen on which I saw the film, there were moments when I could tell, from the faint redness in the whites of her eyes, that Ferguson had been wearing two-week lenses for three weeks. The makeup at the end of hand-to-hand combat scenes looks palpably man-made, analog-like movie makeup, in short. What CG effects there are, in the final showdown especially, stand out as looking a little motion-smoothed. The final sequence of Fallout is the ride of the summer: a three-way helicopter chase, fight scene, and romantic reckoning, classically cross-cut, and progressively more vertiginous as it spans miles and miles of the Indian subcontinent, from mountain lake, to a glacier, to crazy cliffs. Obstacles mount slyly and with foolproof, Chekhovian logic and locked-in tension; I laughed, I clenched up, I did the Italian chef finger-kiss, and then I did all three again. It’s absurd, amazing, and I anticipate a lot of people using MoviePass to buy tickets to random other stuff just so they can sneak into the last half-hour of Fallout again this summer and fall.

And yet! Far be it from me to plant Whoopie Cushions in the pews at this Temple of Cinema, but I do have a Theory. My Theory is that much of the hype since the critical embargo ended immediately following Fallout’s press screening two weeks ago was that a somewhat-above-replacement-level action movie had just climaxed on such a giddy, glass-shattering high note.

Maybe they were all packing away their notebooks and turning on their phones during the denouement, during which most of the film’s cast gathers around Hunt to salute him once more time, and redirect our awe for the film’s achievement back onto Cruise, in case we weren’t going to get there on our own.

Cruise has never been a remotely easygoing or soulful actor—the hyperdrive of pre-millennium American entertainment culture did not exactly associate rectitude with charisma and star power, which is why someone like Kyle Chandler was relegated to the more backward-looking confines of television—and as Ethan Hunt smiles through his tears, and rues the impossibility of the mission that chose him, Cruise effects an inorganic lockjawed stoicism. When the film tries to convince us that not only were these all these things really accomplished, but that they were accomplished by a real flesh-and-blood human, it underscores the creepy calculation that went into creating this role that’s at once Übermensch and Everyman.

Cruise, or the people he pays to keep an eye on this stuff, are wise to the fact that the way Cruise runs is now a meme. Cruise’s style of running form is surreal in its humorlessness—the way he sets his face and pumps his arms robotically is grim, concerted, and it ruins the joke when Fallout winks at it, setting Cruise racing through a busy office. Watching the workers gather around to gape in disbelief at the last action hero in their midst was like reading a promoted tweet from a brand account trying to start its own hashtag. (And whenever Cruise and his team engage in regular-guy banter, or throw their heads back in definitely not stilted laughter, I pictured a Captcha taking a really long time to process.) The smug '80s prodigy is now feeding his own star machine with factory-farmed audience engagement like some kind of corporate transhumanist, like Peter Thiel getting infusions of young people’s blood to preserve his baby-smooth skin. Interview with the Vampire indeed.