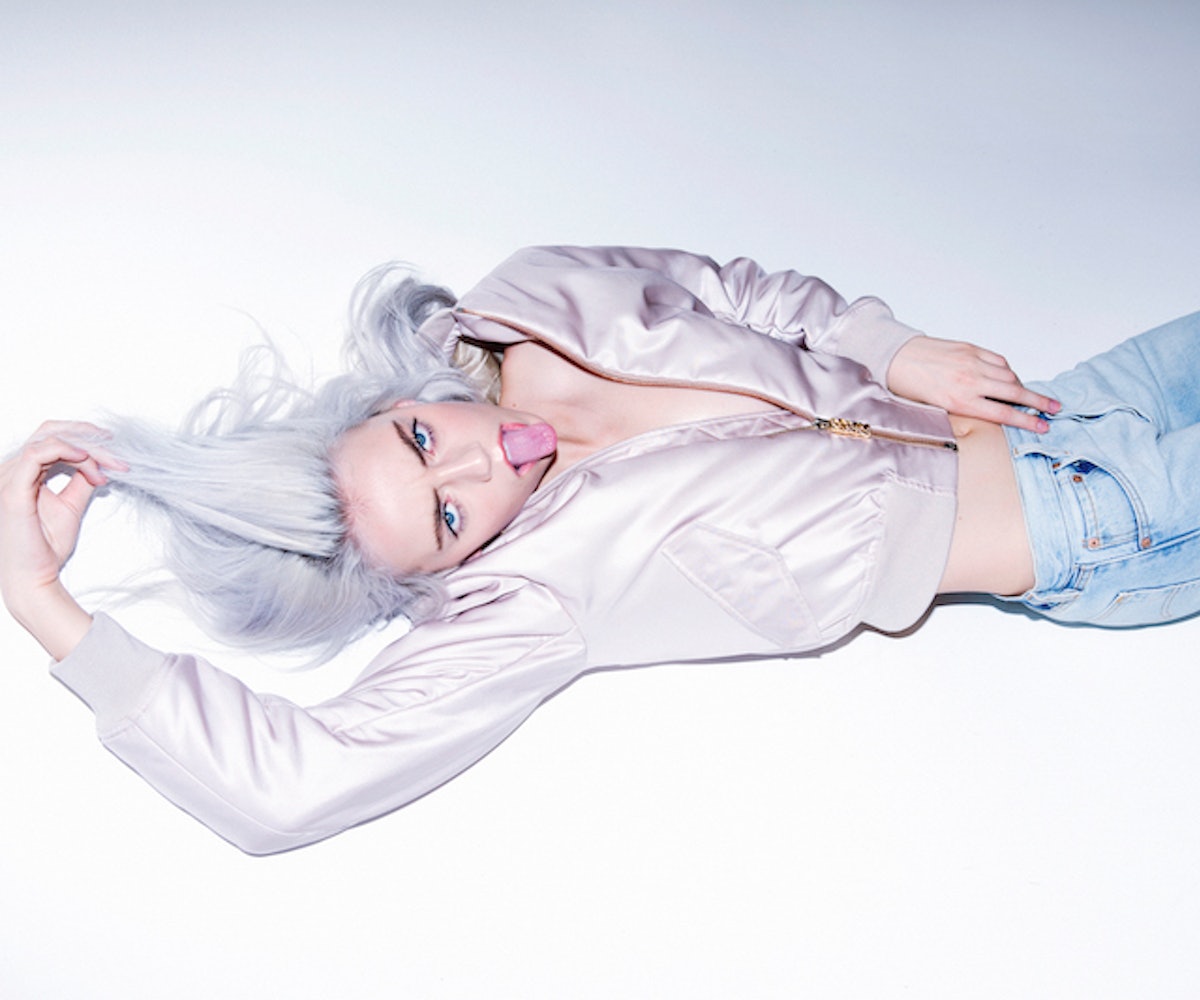 It’s hard to fully understand the phrase “gives good face” until you’ve seen Pyper America Smith in front of the camera. As she mugs for photographer Ted Emmons in a small studio in downtown Los Angeles on an unusually warm fall day, the 18-year-old model’s white-blonde hair, otherworldly icy blue eyes, and luminous fair skin shine in every shot. And her sense of playfulness—whether she’s rolling her eyes, sticking out her tongue, or perfecting an air of ennui—only makes her look even more striking. So it’s not surprising that Smith has experienced a meteoric rise to fashion (and Instagram) fame, which includes walking runways in New York and Milan and being photographed by the legendary Annie Leibovitz in Iceland for a Moncler campaign. “I was seriously like, ‘I’m dreaming right now,’” she says, leaning forward on a tufted white leather couch after the shoot. But fortunately someone was there to remind her that it was real: her younger brother, Lucky Blue, whose similarly stunning looks have made him the star of Calvin Klein and Tom Ford campaigns, and whose face pops up daily on the feeds of his 1.5 million Instagram followers. In fact, modeling is a Smith family affair—Pyper’s older sister Daisy Clementine was signed first when she was scouted at the age of 14. Two years later, when the entire clan showed up at her agency’s office during a California vacation, Pyper, Lucky, and their other older sister, Starlie Cheyenne, were signed, too. Within a couple of months the foursome was starring in Gap’s holiday campaign.

Click through the gallery to read more about our December/January 2015 issue "Model Citizen," Pyper America Smith.

Now, the family of six lives in a two-bedroom apartment in the heart of Hollywood, with all four siblings sharing the master bedroom. “When we first moved it was kind of like we were just having a huge sleepover party every night,” explains Pyper. “We’re in such small quarters we have to get along. Because you can’t, like, run off to your room and shut the door, you have to just hide under your comforter.” It’s a far cry from life in Spanish Fork, Utah, the small town surrounded by mountains and farmland where the Smiths are from. But moving to California was always a dream of Pyper’s, mostly because of how much she loves the beach. She also says it just feels right.  In real life, Pyper is goofier than the smoldering images of her would lead you to believe (see: her throaty “Beverly Hills mom” bit on @pyper.tv). She calls Emmons “Tedster” and is fond of crossing her eyes and giving high fives. She’s clearly comfortable in the spotlight. “Ever since I was little I’ve wanted to be in movies and on TV,” she says. And while the thought of opening a Fashion Week show, as she did for Philipp Plein in Milan, might make even the most seasoned model sweat, Pyper feels right at home on the runway. “It’s like an adrenaline rush,” she says. “I love having all the eyes on me and I’m just walking, doing my thing.”

Modeling wasn’t the only reason her family moved to L.A., though. The Smith siblings are also in a band, The Atomics. “We all got instruments for Christmas one year when I was eight,” recalls Pyper. “Lucky got drums, I got a bass, and my sisters got guitars.” Starlie also sings. “Wild Thing” was the first song their dad taught them how to play, and their debut performance—a set made up mostly of surf rock covers—was on the steps of their local public library during Spanish Fork’s Fiesta Days. Now they perform mostly at high-end fashion events, though recording their first album and touring is on the family’s to-do list.

And family is definitely the first consideration. The Smiths are Latter-Day Saints, and even though they’ve left Utah, faith is still a huge part of their lives. “It’s not like I go out and shout, ‘I’m Mormon’ to everyone I know, just because I don’t want to freak people out if they don’t understand it,” says Pyper. “But religion keeps my mind focused on what matters—on family and loving everyone and trying to just do my best. If I didn’t have that I don’t know where I would be.”