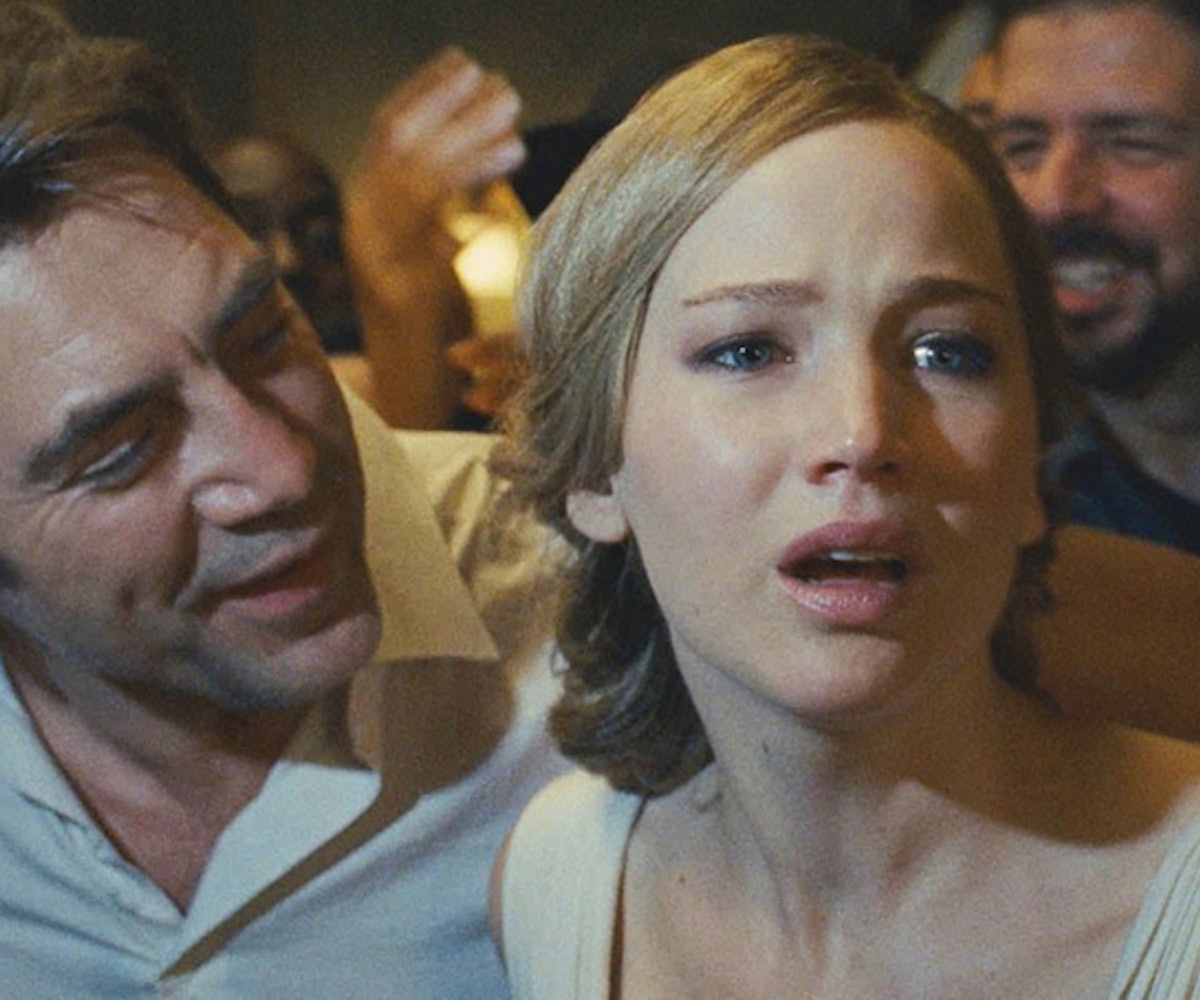 The moment my mother! bubble burst came about two weeks before the movie’s release. A friend of mine had just attended an advanced screening of Darren Aronofsky’s top secret thriller at the Metrograph theater in New York. This was shortly after the movie’s world premiere at the Venice Film Festival (where it got “raves and boos,” a creeping sign of things to come), and just before its big North American splash at the Toronto International Film Festival. At that point, mother! was one of my most anticipated movies of the year. I couldn’t wait to see it, and didn’t want to hear anything about it until I had. The secrecy surrounding the movie’s marketing had me convinced that the less I knew about it, the better. But the day after the Metrograph screening, I asked my friend what he thought. “I hated it,” he said flatly. “Why?” I asked. “It’s all metaphor,” he said, going on to tell me that Jennifer Lawrence is actually Mother Earth, and she’s getting destroyed by visitors to the house or something like that.

That was the moment I realized that mother! was not going to be the home invasion horror with cultish supernatural undertones that I had hoped, or that the thrilling trailers indicated, it would be. I wish I could sit here and tell you that what I wanted was a heady eco-Biblical allegory that would severely divide audiences, frustrate some people, delight others, and piss off most. I know that’s more interesting than a consensus hit, but a consensus hit is what I wanted. I was hoping mother! was going to be a different kind of phenomenon than the one it became, the one that earned a rare F rating on Cinemascore. I was hoping it would be another Black Swan, the kind of artful thriller that became a surprise hit for Aronofsky in 2010, improbably embraced by both critics and the mainstream.

Despite being made by the same major studio that brought you the Transformers movies, and despite starring one of America’s only true movie stars (and our most beloved one at that), mother! was always going to be a strange trip. I knew that. Aronofsky is one of our most audacious, doesn’t-give-a-fuck directors who delights in challenging his audience. Even when working with a large budget within the confines of the studio system, as he did with 2014’s Noah, Aronofsky still manages to make something idiosyncratic. His career has been both uneven and unpredictable, but always interesting. Requiem for a Dream had a huge impact on me and vaulted Aronofsky to the top my list of directors to watch. The Fountain was bloated and pretentious and maybe too audacious. The Wrestler brought Aronofsky back down to earth and showed that he could deliver character-driven nuance. And Black Swan felt like the perfect marriage of all of his gifts: A brazen, terrifying mindfuck that somehow remained accessible enough to win Natalie Portman an Oscar. When the very first visual from mother! emerged, a life-like drawing of Jennifer Lawrence holding her own bloody heart, it felt like Aronofsky was planning a pseudo-sequel to Black Swan, something that felt both radical and satisfying.

That’s what I was expecting when I was planning to see mother! for myself at TIFF, before it hit over 2,000 theaters on September 15. I missed those screenings and soon began to see reactions from critics pop up on social media, and the movie’s divisive chasm began to reveal itself. Some people loved it, others hated it. Many were predicting an audience revolt. Those predictions came true.

When it was released last week, the debate surrounding mother! centered around what it was about. At that point, it had become impossible for someone like me, who spends most of his day on the internet and follows many critics on Twitter, to avoid the discussion, even though I was on the sidelines. It was still entertaining watching others argue about it. But the more I saw, the more of the mystery surrounding the movie began to evaporate. The popular opinion was that it was a Biblical allegory, but not everyone agreed. The New Yorker’s Richard Brody called it a satire of fame. He even went so far as to challenge Aronofsky himself, who says the movie is about climate change. Discussion and debate surrounding art is important, especially when that art is produced by a corporation. That’s a small miracle because it almost never happens. Studios are in the business of delivering the safest product possible, designed specifically to reach the widest possible argument. That Paramount took a chance like this needs to be commended. That it failed at the box office needs to be mourned.

When mother! opened in third place at the box office, grossing just $7.5 million, the debate shifted to whether mother! was actually good, or a giant misfire. It also shifted to a debate which felt like the entire country was having to one that was being disputed by a very vocal but very small group on the internet. Despite having Katniss Everdeen’s face on its poster, mother! registered as a mere blip on the national radar. Aronofsky, who began this movie’s life cycle as the guardian of all mother!’s secrets, suddenly could not stop talking about what this movie actually meant. He defended it in the face of its F Cinemascore as a “punk movie.” Paramount came out and defended the movie, too, and even used some of the negative reactions in its marketing. And literally five minutes ago, Aronofsky posted a new poster for mother! on his Instagram feed that announces it as “the most controversial movie in decades.” On the caption, he writes, “you decide,” and even hashtags the word “controversy.” It’s all starting to feel a little desperate, less like someone wants you to see his work, and more like someone wants you to pay up.

At this point, I don’t think I will, which is a weird thing to say about a movie that I couldn’t wait to see only two weeks ago. But after the public backlash (and another friend whose opinion I trust calling it “pretentious crap”), I think I’ll sit this one out. I don’t go to the theater as much as I used to, and when I do, I want to make sure it’s something I’ll enjoy. I’m glad that Aronofsky teamed up with a major movie star to realize his uncompromising vision, and that it’s sparked conversation. It’s a conversation I’ll be happy to join after mother! makes its way to HBO Go.