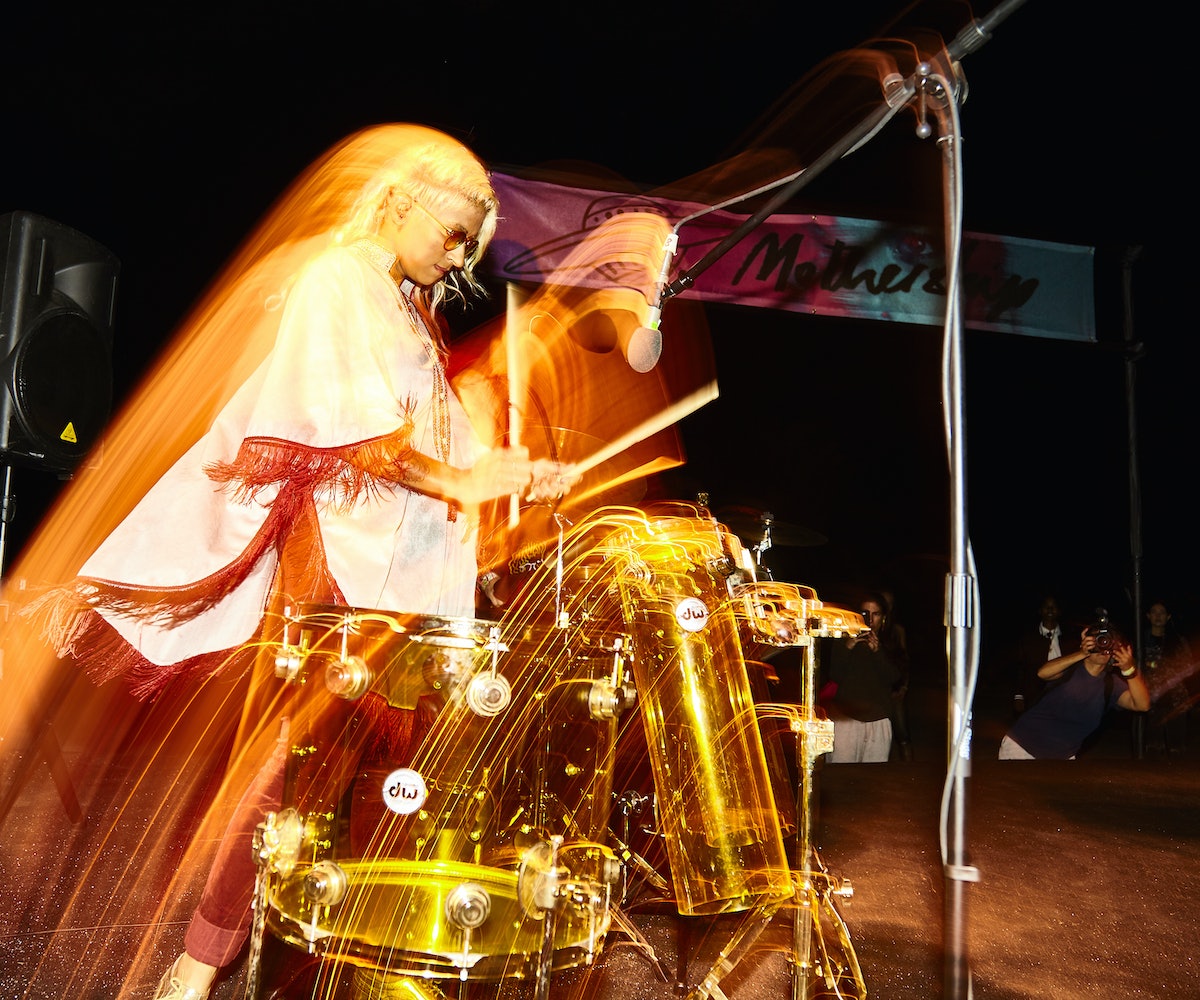 If you haven’t heard about it yet, MOTHERSHIP Festival is a game-changer: It offers a diverse roster of panels and musicians, and every single person featured is woman-identified. “Everyone performing, including all the musicians, including who’s drumming—everyone on our stage—is woman-identified,” notes founder Laura Wise, "as well as our presenters, bartenders, everything.” The same goes for attendees—as Wise says, “if you identify partially or wholly as woman, then you are welcome.”

Wise started MOTHERSHIP four years ago, partly out of a desire for a space where women could empower one another, and partly out of a desire to get her friends who didn’t identify with feminism yet into the fold. And, too, she felt as though when she was in event spaces dominated by men, women were disadvantaged, silenced, and even harassed. Many women aren’t able to find spaces that don’t include men in their everyday lives, and being in a space with only women, she says, is like having a weight lifted off your shoulders. “I feel like just not having that male gaze or that fear that I'll be spoken over or sexualized or spoken down to was so freeing for me,” she says. Her need for a space free of men resulted in the creation of roving event, which is different each year—and each year, the lineup gets better. This time around, MOTHERSHIP is a day-to-night event, featuring workshops during the day and a music festival at night.

All day, there will be panels for festival-goers to attend—two to three will be held every hour on the hour, so guests can choose what to go to throughout the day. The goal of these is to give women a safe space to learn about topics that they may not have had the opportunity to explore previously or identities that they may not have previously encountered, in a space free of judgment. Masturbation—still a taboo subject, especially for women—is the topic of a seminar, and then there's a discussion on embracing bi, pan, and fluid identities. Says Wise, “Everyone’s in this like-minded, open place of ‘I'm here to learn and grow and connect with other women and become stronger together.'” Guests leave knowing more about the world, and maybe even more about themselves.

At night, MOTHERSHIP transforms into a music festival, with 10 headliners rounding out the schedule. Notes Wise, the fact that the lineup includes only women-identified performers is a fight against mainstream, male-dominated music festivals. Woman headliners at music festivals are, still, astonishingly hard to come by. More than two-thirds of all acts at festivals this year were strictly male, according to a study by Pitchfork, with only 19 percent of acts being female and 11 percent of groups featuring at least one female or nonbinary member.

Not only are female acts often elusive, but women in the audience often deal with sexual harassment on festival grounds. More than two-thirds of women worry about being sexually harassed while attending what is supposed to be a fun, relaxing event. Wise told me that it doesn’t have the same problems with sexism and harassment that other festivals still have: “Our space is going to be free of most of that because we've removed the main offenders,” she says. “Once you're done learning, and you've had this inspirational day, you can let loose and shake it off and have a drink, and not worry about what's going to happen to you in the space.”

Kianah Jay, known by her stage name Two Lips, is relieved to be performing at an event in an all-female space. The dominance of men in the music industry isn’t just seen in festivals but also permeates the entire industry. “The fact that [MOTHERSHIP] is an all-female-run organization is really special because, in music, most of the music industry tends to be such a boy party,” she says. “And that's at every level—from other artists to management, production, and then for festivals.” So, when there is an opportunity for her to collaborate with and perform with other women, she jumps on it.

The feeling that comes from being in a space without men, too, makes Jay feel empowered. She says, “I feel a lot stronger when I'm surrounded by other confident and motivated women.” And especially in her industry, when she collaborates with other women, she not only feels more comfortable but more able to succeed. “I feel more confident in my engagements, I feel more prepared to ask for opportunities or more confident that I'm going to do a good job,” she says. “And that's something that has come hand in hand with my relationship to other women in the music industry.”

Both Wise and Jay have made it their mission to open doors for other women in any way they can. Not only does Wise create a space each year where women can let loose without fear of being overpowered, harassed, or judged, but she also gives performers and panelists the opportunity to gain credibility by having been a part of this experience. Jay, too, makes it a point to hire women when she is in the position to make business decisions. “It's become essential to me as an artist to work with other women and to give them whatever opportunity [I can],” she says. “If we don't give it to each other, then no one else is going to give it to us.”

When women are given the opportunity to express themselves and let their inhibitions down, they can produce better work and are able to understand each other on a much deeper level—and MOTHERSHIP gives us the opportunity to do just that.

MOTHERSHIP Festival will be held this year on September 22 at Appointment Only in Los Angeles. You can still grab tickets, here.