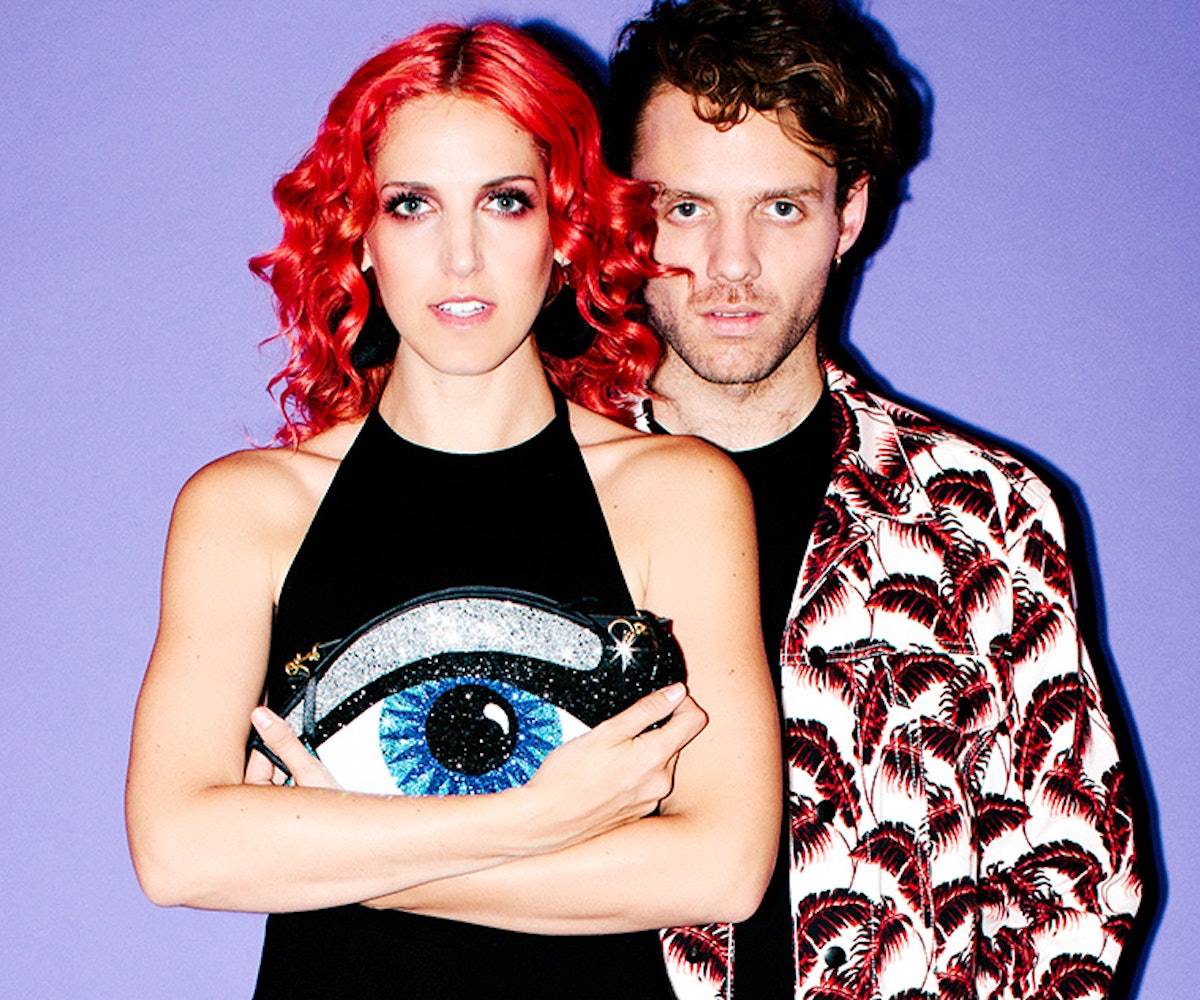 The closing track off MS MR’s debut album Secondhand Rapture evanesced into light chimes, then nothing. The air hung with Lizzy Plapinger’s gentle reminder that “you’re not alone.” The somber finale was blown out of the water two years later with “Painted,” MS MR’s first single off its sophomore album, How Does It Feel. Electric guitars hammered beneath a driving bassline while Plapinger wittingly asks—almost with a sneer, “What did you think would happen?” Whatever happened in the two years since “Strings” had unleashed an animal in the New York duo, and it comes out in full force on their latest release.

Plapinger and the second half of MS MR Max Hershenow have created an album that’s big—in more ways than one. Anthemic pop jams mix with big moments of introspection that showcase the duo’s knack of experimentation. They’ve steered clear of the sophomore slump, and rightly so. The album is infectious. It’s a departure from the last, but a welcomed one. As they told us during a recent stop in New York, MS MR wants you to dance, and How Does It Feel will get you to do just that—all while feeling all the feels.

How Does It Feel drops July 17 on Columbia Records.

In the two years since your first album, what have you guys learned? What’s changed?

MAX: Pretty much everything’s changed! We’ve gone from not knowing what we were doing, sort of experimenting and just winging it, to feeling like we’re much more intentional and focused, and have more of a game plan of who we are and who we want to be.LIZZY: I think we’ve become significantly better musicians. I think I’m a much better singer than when we started. I think Max is a better musician and producer. So much about the second record was just being more intentional and articulate about our sound, our lyrics, our themes, and our visuals. I think there is a cohesion to the record and to the visuals that we sort of needed to grow from the collage format of the first record.MAX: When we first started out, I had never really produced and Lizzy had never really sung. Every record was really just about experimenting as much as we possibly could. But after touring and realizing who we were on stage and that we wanted to be moving all the time, we knew we needed to write music that was more reflective of that.

Definitely, I mean this whole album is big. It’s anthemic. Was that intentional or did that just kind of happen?

LIZZY: I’m really really glad you think it’s anthemic! I think so much about our lives being on the road in the past couple of years is that we realized how much we loved being on stage, and we wanted to write music that felt good to perform and dance and be raucous to. We wanted to encourage our audience to move as much as possible and sing along with us. So, I think there are moments on the record—especially with a song like "How Does It Feel," which was definitely written with a crowd in mind—thinking about what it would be like to scream, "How does it feel?" with thousands of people at a festival. And it’s exciting to sort of bring your visual fantasy of what it’s going to be like performing on big stages while writing the record. It’s been fun playing these underplayed shows, giving people a taste of some new songs, and already people are signing along to songs they haven’t heard before and dancing as much as possible. It’s really great.MAX: The high drama of it has always been really important to us, and we came back to this record thinking, “Okay, what are the things that really define us as a band?” At first we sort of shieded away from the high drama again, thinking maybe we shouldn’t go that route, but I think we realized that’s who we are and that’s something we ended up teasing out and making more of the focus. Why not make songs that are so big and over-the-top and exciting? That’s who we are and that’s who we want to portray.

None of the songs seem to follow a traditional songwriting structure. I know you guys were experimenting, but did you guys learn the rules and then break them after, or did you just go for it?

LIZZY: I think it was a combination. The first album was very much about learning song structure. There was a freedom to experiment and bend the rules. We talked looked at bands like Arcade Fire and Tame Impala who sort of take you on their own odyssey on one track. It isn’t about just going from verse to chorus, but taking turns along the way and making each portion of the song feel like it’s own experience.MAX: —but still make the song feel cohesive and pop and emotionally satisfying.

And at the same time because of that, it seems genreless. It’s dancey, but it’s also not dance music.

MAX: Yeah, and I think increasingly that’s what we want to do. We wanted to make music that made you move but not necessarily all fist-pumping move. There are songs that feel reckless that are absolutely that, but there are also songs that have a groove to them and a little jungle influence and sensuality, a little sexiness. We wanted a record that. You can dance to it in the club, but that you can also makeout to and everything in between.LIZZY: There’s a movement to each song and thinking about how, physically, people would be moved to the song was something we were conscious of.

There seems to be a theme of entropy throughout. What sort of stories were you pulling from your life that inspired that?

LIZZY: It’s always very personal. I think for me, lyrically and thematically, the first album was very much about wallowing and darkness, marinating in your misery and just enjoying being sad, having inner turmoil and a lot of teen angst in L.A. I think this record is about a more mature relationship to that darkness—not just wallowing in it, but using it as a catalyst to move forward, embracing it as something that could propel you forward. There’s light at the end of the tunnel. I think even though there are some dark and turbulent moments on the record, I think, ultimately, the record is more about perseverance and empowerment.

What would you say is the most empowering song on the album?

LIZZY: I feel pretty good about “No Guilt in Pleasure.” For me, that song was written so much with festival culture in mind: Being at a festival and making sinful choices and not feeling bad about them—to just fully be in a moment and live your life and enjoy your life and not feel bad about it.

How do you two inspire each other? Do you come up with beats or lyrics first?

MAX: There’s no system to it, really. Sometimes it’s the melody, sometimes it lyrics, sometimes it’s just a phrase I’ll build off of. Our drummer helped us produce and write a lot of songs on the record; sometimes he would have an idea. I think this record, from the last one, we realized that our best songs came when we were all in the room together. I think for us, it’s important that we continue mixing up the dynamic. I feel like we don't need to settle into one process or one way of writing. It can get really stale when you write the same sort of song over and over again. I think it’s exciting to try and mix things up and work within constraints and set up problems for yourself, like “Let’s try going into separate rooms for 15 minutes and then come back,” or, “I can only play piano bits, you can only play with whatever thing you want to play with.” I think continuing to shift is really important.LIZZY: I think that there’s a healthy amount of curiosity in everything that we’re doing. Even though we’ve grown and we have much better skills to articulate our vision of what we want to communicate in a song, we’re still pushing the songs, or lyrically taking them to a new place.

How would you describe the album if it were an emoji?

LIZZY: I hope that they feel propelled forward, that they feel understood and consoled through the music, and inspired to do their own art or whatever they’re working on. We really really like when fans get involved—whether it’s paintings or making their own music or making videos and sending them to us. I think that’s the best feeling, when you’re inspiring other people to be as creative as possible.