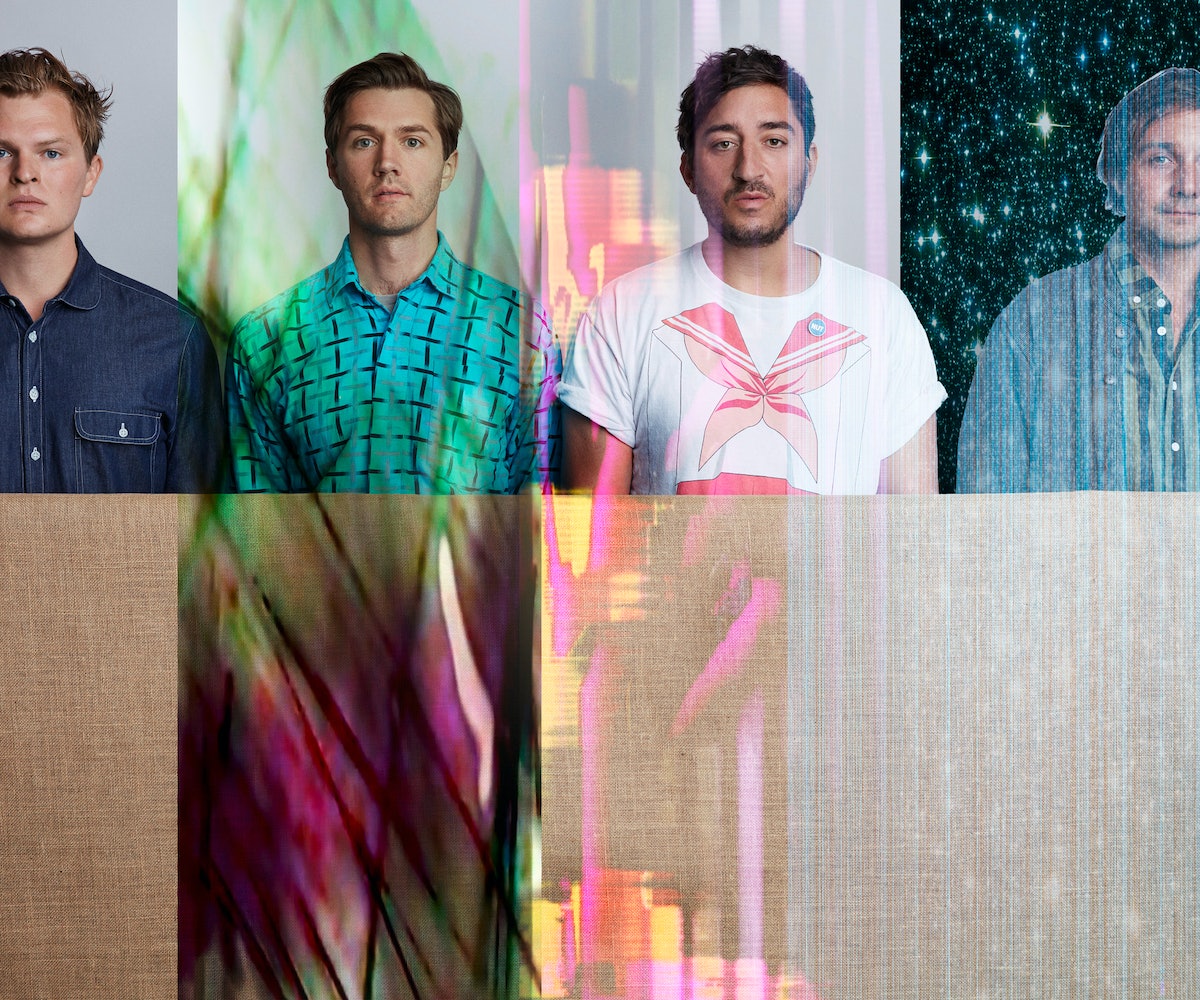 Believe it or not, we’ve not even at the halfway point in this crazy year. (Emotionally, physically, and mentally exhausted? You’re definitely not alone.) If you’re like us, you’re probably getting through it all with a little help from your friends—those blessed souls that can speak a bit of sanity into our lives when everything seems to be spinning out of control. (Now would be a great time to text your BFF.)

In honor of those relationships, and the words of wisdom from those who know us best, we asked 16 of our favorite musicians about the best advice they’ve ever gotten. From twists on the classic “know thyself,” to thoughts on fear, control, and living your life to the fullest, they were happy to share wisdom collected from their nearest and dearest.

And in case no one has told you this lately, here's a piece of advice from us to you: You’re good enough. Life can be a never-ending parade of weird, but don’t worry—you’ve got this.

Marika HackmanMy old manager said to me that the stuff you say no to is the most important. That’s across life as well. You can’t always say yes to everything. You have to pick stuff that’s going to make you feel good. Good for life, good for your work. At the time, even when something seems like a great opportunity but you realize in your heart it’s not quite right, don’t do it.

Jonas Bjerre of MewSomeone told me once to remember to be who you are. To not try to be what other people expect you to be. I think that’s very important in life, especially in this world. I think a lot of people feel depressed by the idea they have to be something more than they are. It’s almost like it’s more important for people that other people think that they’re happy and successful than actually being happy and successful. Your value system is twisted. It’s perception rather than reality. I think that is an important thing to think about. You sometimes forget. What am I trying to do here? Am I trying to fit in, or am I trying to be a happy person? Am I trying to live up to the expectations of strangers or my boss or my colleagues or peers? Or am I trying to be the person I want to be?

Sondre LercheIt sounds a little silly, but one thing that we kept saying to each other in the studio with these last two albums was, “Be bold.” Which sounds like something you’d see hanging in someone’s house. It’s got something to do with connecting the head with the body. That was difficult for me 15 years ago. My head was floating miles above my body. That’s why the album Pleasure is so concerned with physicality. Not only the body and sexuality but with concrete objects. I should have told myself to lower my shoulders and enjoy some pleasure.

NyxeThe best advice I got came from the book Bird by Bird by Anne Lamott. It's the sentiment that though life seems overwhelming and impenetrable, you've just got to take things "bird by bird," one moment at a time, piece by piece. Whenever I feel myself spinning out to obsess about the impossible future, I just remind myself to take a breath and live my life bird by bird.

William Cashion of Future IslandsWe did an early show with Dan Deacon. I was asking Dan something about where we should set up. Back then, we would set up on the floor because Dan would set up on the floor. It was cool to play with the audience around you. I asked Dan what he felt we should do. I remember he told me, “I think you should do whatever you want to do.” I know it’s simple, that advice, but that freedom of approaching things and asking, “What do I want to do?” and then actually doing what you want to do. The only time you can be completely free as an artist is when you’re performing. No one can tell you what to do when you’re in the moment doing it. It was important for me to realize that I had more control than I thought.

Ramona Gonzalez of Nite JewelMy husband Cole, who helps me with bits of the label and music, he always tells me to think about our favorite albums. Think about all the albums that changed our lives. Were they ever popular in their time? Never. Popularity should not be a goal if you want to make good art. It just can’t be. My taste is about things that are rare and unique and have a very singular voice, and things that were panned at the time of their release—those are the albums that I’ve become attached to. You can’t be influenced by that and then turn around and say, “I want to be the biggest thing this year.” You have to stay connected to those things that are aesthetically pleasing to you.

Juana MolinaI had a duo with Alejandro Franov. We'd been playing for a while. One day, three days before a big gig, he tells me he can't do it, that he wanted to go to the mountains. I couldn't believe it. In the middle of the conversation, he said, “Listen, Juana, I think it's time for you to get some independence and put together a solo show.” I was so angry and desperate that I ran into the studio, and the first thing I did was design the architecture of my solo set. That's how I then toured the world on my own for years.

Sarah PIt was my mom who advised me to distinguish between what’s coming from a good or a bad place. To learn to tell between constructive criticism and meanness. The music industry is very competitive, and one needs a strong stomach to emerge to the surface—the surface being what most people see. Until the point I was reminded how important it is to value who says what, I have to admit that I felt as if I were drowning in deep waters.

Ed Droste of Grizzly Bear Travel as much as you can. Some people don’t like it, but I love it. If you can, go to as many places as you can. I don’t regret a single place I’ve ever been. I have favorites—even the experiences I’ve had abroad that have been difficult, I don’t regret having them.

Thomas Mars of PhoenixGrowing up, I wouldn’t really take advice because it felt that we were really disconnected. It was just the four of us trying to figure out a new way to do things. It was more rejecting advice and trying to be smart about it. But now there are pieces of advice I could give. But I feel like especially in music sometimes the role of an artist is opposite the role of the teacher. These two types cohabit a little too much these days. A lot of artists feel like they’re on a pedestal and they give their vision to everything. Where I love the function of being good at what you do. Of being a citizen and doing one thing and then we all depend on each other. There’s not one person that can take over every single field. Everyone has their craft, and the beauty of it is that we’re all functioning and we all have specialties. I don’t see the appeal of one being able to do all these things. It’s a really long way to say, I don’t want to give advice.

Morgan Kibby of White Sea It’s something I’ve learned over time: Being anything other than your authentic self is a surefire way of being disappointed in your life. Whatever you are, even if you don’t like what it is at the time, explore it and develop out who you really are as opposed to who you think you need to be. You’ll have a lot more joy.

Ingrid Helene Håvik of HighasakiteThe only thing I’m living by is, just do it. Even if you don’t want to, just do it. Hopefully, it’ll turn out good.

Sarah Cracknell of Saint Etienne Stick to what you think is the right thing. Don’t get swayed. If you have an idea, and you have a plan, and you have a vision for your life, and you want them to look or sound a certain way, stick with it and don’t get distracted by any outside forces. Even if it takes a while, people will see that genuine element.

Adrianne Lenker of Big ThiefFirst, it sounds, and then it means. That’s just something that my friends and I came to and discovered for ourselves. It’s a nice thing that I’ve been repeating. Not trying to extract meaning from something before it comes into existence. Allow the thing to exist and not living in the past or future with it in your head.

Johan Angergård of DjustinI think it’s very difficult to pick up on advice. Life is not black and white. There’s so much in the gray scale all the time. There’s nothing right or wrong. Everything has a bit of right and a bit of wrong in it. Advice is usually quite black and white, like, “This is the way.” That’s very difficult to use in real life. Real life is so messy and full of different emotions, feelings, and factors you have to take into account.