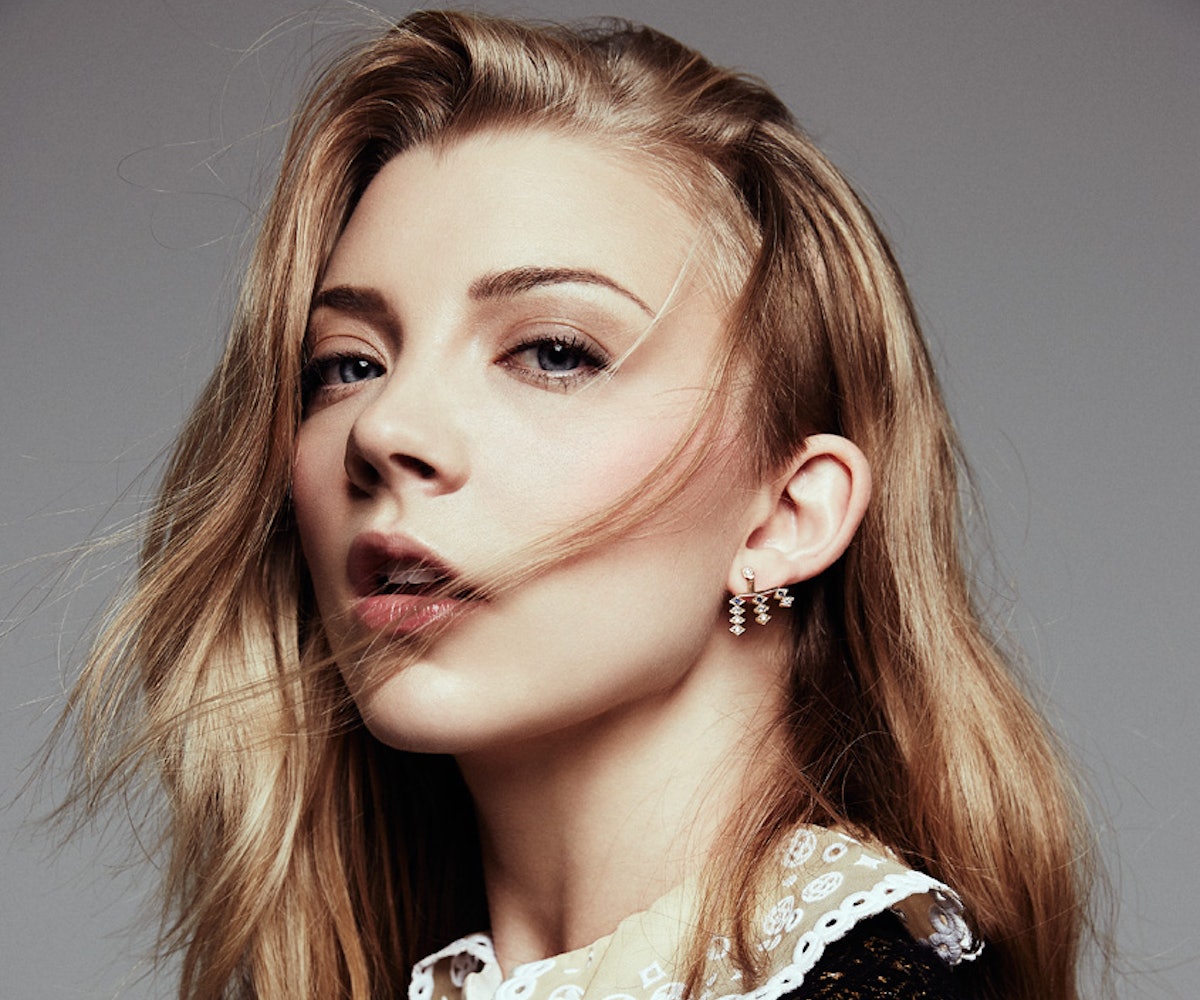 At a photo shoot in Los Angeles, in between various sultry and balletic poses, Natalie Dormer isn’t afraid to try goofy things. Dressed in sharp black angles, she peeks out from behind a big plant with her jungle-cat eyes. She grabs a leaf and fashions a quick mustache—“like Dali?” she ventures. When the photographer kindly nixes her improv, Dormer breaks out into her signature lusty laugh and, undeterred, launches into the next pose, saying, “You’ve got to try these things, you know?”

From cinching herself into corsets as Margaery Tyrell on HBO’s epic series Game of Thrones to running after revolutionaries as documentarian Cressida in the upcoming Hunger Games: Mockingjay - Part 1, giving it a go is how Dormer has gained a reputation as a quick-witted and full-throttle actress.

She claims she isn’t blessed with the cunning her wannabe queen possesses: “I wish I had Margaery’s knack for opportunistically manipulating a situation on the spot, but I don’t.” Nor was she favored with the industry connections that have shot some of her contemporaries into the spotlight. Dormer’s childhood in Reading, England, where she occasionally suffered taunts from bullies, saw her secretly fantasizing about an acting career—with no idea how to pursue it. Performing at Starmaker, the same theater school that trained Kate Winslet, was her biggest claim to fame.

Eventually, her ambition drove her to London, partly to follow her then-boyfriend, but also to sink herself into the intensity of drama school. “They break you to make you,” says Dormer, 32. Drama school also taught her the value of restraint, which she credits as the foundation of her two breakout performances for American audiences. Her portrayals of Anne Boleyn in The Tudors and Tyrell in Game of Thrones—two scheming women—have both been praised for their understated quality.

Still, after both of these high-profile turns, one of which is ongoing (she’s in the middle of shooting season five of Game of Thrones) Dormer admits to tiring a little of playing the prettily conniving maiden. “I must have a variation on resting bitch face, like, maybe I have resting manipulative face, through no fault of my own,” she says. Manipulative isn’t the word, but it’s true that Dormer doesn’t look like anyone’s fool. In person, she radiates confidence, almost swashbuckling with gusto.

Despite her considerable presence, typecasting still rears its head for Dormer. “Don’t overestimate the occasional laziness and lack of imagination that can be found in this industry that continuously recasts you in roles you’ve already played,” she says.

She’s the first to admit, though, that she’s sometimes scooped up those roles—for the right director. When Ridley Scott came calling for The Counselor, Dormer said yes, despite feeling that she’d played enough, as she describes them, “femme fatale/honey trap” roles. Later this year, she’ll lace herself back up in a corset, that garment she forbade from ever constricting her waistline again, to play the wife in an as-yet-unnamed BBC show about the first celebrity divorce case in 18th-century England.

Her true personality, it turns out, may run closer to House Stark than Tyrell. One of Dormer’s friends sent her a “Which Game of Thrones Character Are You?” online quiz a few months ago, and she got Arya Stark, the feistiest survivor of the decimated noble family. “It was particularly amusing because Maisie Williams and I were doing a panel together at San Diego’s Comic-Con, and we were asked that question,” she says. “I was able to answer right away.” Dormer is quick to point out that she doesn’t attribute too much psychological gravity to a multiple-choice quiz. “I suppose that I’m a bit of a tomboy, and I probably say things out loud that I shouldn’t,” she admits. “I’m quite a straightforward person, not underhanded like my character.” Cressida, however, marks an entirely new direction. As Dormer points out proudly, “She’s a woman who’s not defined by any romance; she’s defined by her job. That’s her raison d’être.” Shaving off half of her hair to play the role of the ambitious filmmaker who first follows Katniss Everdeen (Jennifer Lawrence) out of professional interest, then transforms into a believer, was an especially nervy stunt. “There were one too many polar vortexes in New York for this kind of haircut, but I enjoyed doing it. That’s a fun part of this job. You get taken out of your comfort zone physically, geographically, whatever.” She also had her head inked regularly and waded through “neck-deep waters with semi-automatic rifles,” though audiences won’t see these soggy battles until Mockingjay - Part 2.

“I don’t know if I’m a daredevil exactly,” she says, “but I do enjoy a good challenge. It’s the only way you grow.” When asked if there’s anything she wouldn’t do, Dormer falls silent before unleashing a bout of laughter. “I don’t know. I will let you know when someone walks me up to the line.”

Not to say that Dormer doesn’t have her boundaries. Though she’s engaged to Irish director Anthony Byrne, Dormer doesn’t field questions about her relationships or her family. While she loves the idea of connecting with fans by offering “something encouraging in an interview, whether it’s about bullying or not looking perfect,” she doesn’t participate in social media.

“To each their own, and I say that with no judgment of other actors. But I try to keep my private life private.”

Perhaps, in part, because she’s seen what the media can do with intimate material. “What Jen [Lawrence] went through recently was just horrific,” says Dormer. “And I don’t think there’s any level of fame that can justify that kind of invasion into privacy, not to mention laws being broken. I mean, people just need to get a grip if they think that’s even halfway acceptable.”

So for now her private life remains tucked away—though little bits come out in casual conversation. In her rare downtime, Dormer relishes quiet connection, especially with non-industry friends. “I like hearing about their lives and their problems. It puts things into perspective.” As far as she’s concerned, the fantasies can all stay in King’s Landing. “I like to run and do some yoga and cook—all those very simple things that just keep it real.”