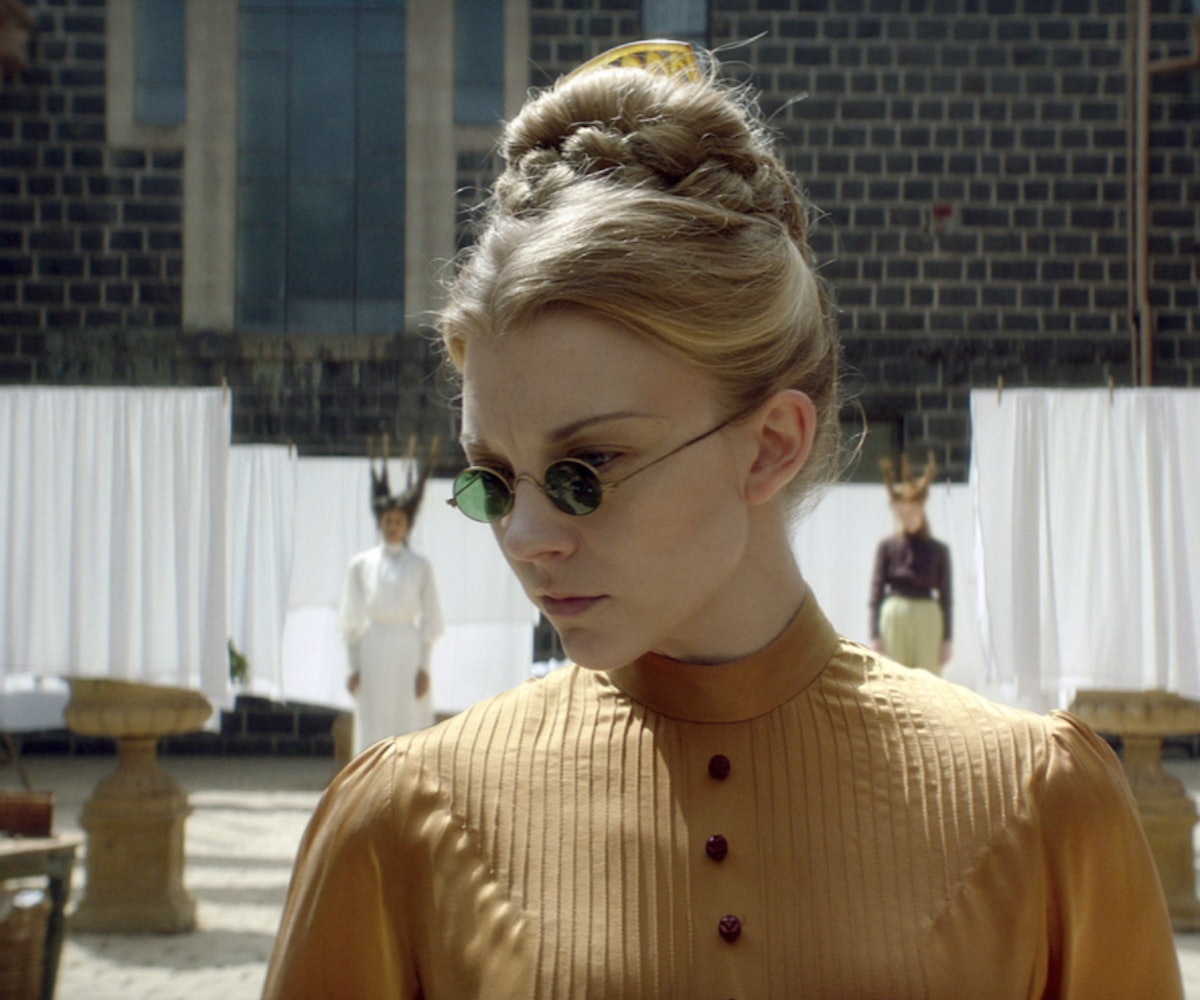 Photo courtesy of Amazon
by Kristin Iversen
May 24, 2018

Over the course of her career, Natalie Dormer has played many roles, but she's perhaps best known for those of two doomed queens: Anne Boleyn in The Tudors and Margaery Tyrell in Game of Thrones. Both of these women are iconic in their separate spheres of history and fantasy, and have in common one defining thing: They rose to power in male-dominated worlds, and did so using the feminine tools at their disposal, only to succumb, eventually, because of their gifts at playing a game they were never going to be allowed to win. Both women are warnings, then, of the dangers of participating in a system which is designed to oppress women, the dangers of thinking your fate might be different if you allow yourself to be a tool of the patriarchy. Dormer's portrayal of both women left an indelible mark on anyone who watched; her gift for playing incredibly complicated, powerful, yet constrained characters is a sight to see. And, now, as Hester Appleyard, in Amazon's new adaption of Picnic at Hanging Rock, Dormer has a new complicated, powerful, yet constrained woman to embody, and she does so with a sensitivity and intelligence that is a marvel to behold.

This latest iteration of Picnic at Hanging Rock is not the first adaptation of Joan Lindsay's 1967 novel about a group of Australian schoolgirls who go missing on a day trip to Hanging Rock; Peter Weir's 1975 film adaptation is a dreamy, gauzy, stylistically superb version of the story, one which relies heavily on the magical realism throughout the novel, and is more of an impressionistic rather than literal retelling of the story. This new version, which has Dormer portraying the stern school headmistress with a complex past, is far more expansive and offers a fascinating look at the oppressive patriarchal society that was colonial Australia. It is reductive to look at art and see it as being merely relevant to what is happening in the world today, since true relevance is timeless, and yet it is difficult not to watch this series and notice the ways that Appleyard fits into a tradition of other women throughout history and into the present, who, rather than fight an unjust system, choose to participate in it, only to have a final reckoning as to what their selfish decisions have wrought.

Below, I speak with Dormer about what it was like playing such a complicated woman as Hester, how Picnic at Hanging Rock fits into the Me Too movement, and why bullies are bullies.

What was your relationship to the original text, both the book and the film?

I didn't have a relationship with the story at all—I had never read the novel. And even though I had seen the famous sequences of the film, I had never watched it the whole way through. Which was probably to my benefit, because it meant that I read the first scripts cold, and I thought the way Beatrix Christian wrote felt so unique—bold and psychologically poignant. She's a playwright by design, and... she has a very unique voice that drew me in. And then that led me to have a FaceTime with Larysa Kondracki, our showrunner and director, who is amazing and who had such vision. So, an incredible script plus a director with a strong vision, and what else do you need? I was intrigued by not just the women on the page, but the women I was talking to. I thought, These are incredibly talented women.

Once I said yes, I went back and read the novel and realized what [Beatrix and Larysa] obviously knew when they offered me the job, which was that within that 200-page novel, Joan Lindsay makes so many hints and nods in subtext that you can have a field day with them all. You can roll up your sleeves and find six hours of drama easily. You can make 10, 16, 20 hours of drama actually if you really wanted to elongate it. No matter how seminal and incredible the Peter Weir film is, stylistically, to actually explore the drama of the story, it had never been done before in proper detail.

And that's the real benefit of television right now, that it offers such a deep storytelling experience, and potentially can really balance style and substance, and create something bigger. Is that part of what appeals to you about this project?

There's a real opportunity to explore this massive ensemble cast, who are in the book by the way, and to give them all emotional journeys and psychological journeys. And not just with one or two characters, but to actually flesh out a plethora of characters. Obviously, it was sold to me on the premise that they wanted to use Hester Appleyard as a nucleus from which they spread the web of the story. Fundamentally, it's a great mystery, like a "who done it." It's the oldest form of storytelling, a great edge-of-your-seat page-turner.

I think that is one of the things that narratively must be so compelling—there is no specific answer at the end. In fact, a lot of people didn't know how to receive the book. They weren't sure if it was fiction or factual, or if it should be categorized as magical realism or science fiction.

The top-tier science fiction is always anthropology, always a metaphor for our lives. So even though [the story is set in] 1900, it doesn't feel like normal costume drama. Because it has this sci-fi, magical realism element that is anthropology and lends itself to us being able to understand it in a modern way.

What is so interesting too is that the novel was written in the '60s, it takes place in 1900, and now here we are in 2018; it's not just that these are evenly spaced, in terms of timing, but these times have a lot in common...

For feminist milestones! From the turn of the century, where the fight for the vote is galvanizing, and achieved in those next 20 years, to the '60s, to what we are going through now. I couldn't agree with you more.

It's these feminist waves, for sure, but then, also, these really interesting patterns of mysticism. In the early 20th century, there was this huge rise of occultism.

The same thing happened with drugs and the New Age [movement] in the '60s.

Exactly, and now everyone I know is into crystals and astrology. And I do think that mysticism is so tied into the divine feminine.

There is something in us with trying to find out identity, going back to the moon goddess, this sort of mother earth spiritualism. And the Australian landscape in our story is what represents that. The rock represents that.

And really so much of what happens in your story is this struggle between the natural...

Well, Hester represents society. She represents someone who has been victimized. As you peel back the layers in those six hours, you see that she has been a victim of a classist, economically constrained, Victorian society. She has been repressed. She hasn't been able to contact that natural self you're talking about and has, therefore, become this monster as a persona, but found herself leaning into that mask, and it becomes her identity. It's only really redeemed when she touches her inner spiritual self when she goes to the rock in episode six.

How did you access the humanity, vulnerability, and the goodness of Hester? It couldn't have been easy.

Yeah, I mean, it was hard because I am so not Hester. I highly value that relationship with nature. My antidote to modern life and busy press schedules is taking the dog for a two-hour walk into the countryside. I believe very strongly that nature has a tendency to ground us. It is an important counterbalance to modern life. I found that Hester is determined, but I wouldn't necessarily call her strong. She is a profoundly broken woman. I found it painful toward the end playing her because it is not healthy to play a bully. It's not a headspace that is fun to be in for long. Some of the scenes I had were quite difficult because of something we all know: Bullies are bullies for a reason. They've got their own profound issues. They are deeply insecure or broken themselves. There is a bit of the monster in Hester. I would be the first to call that. But, what Larysa said is, "This is why I want you to play her. I think you would bring a humanity and a vulnerability to her, that I won't necessarily be able to find with another actor." I was curious by that. But, yes, Hester is one of the least self-aware, emotionally-out-of-contact-with-herself characters I've ever played.

It's fascinating to see how fully she felt like she had to embody these weapons of patriarchy in order to have power for herself.

She's a product of her time, and she's a product of the wrongs that were done to her. This is a time when women don't have the vote, they have no legal right to property, she thinks she is equipping the girls with the skill sets to get on. But, it's like tough love. She doesn't mean to be malevolent. Yet she is doing an utter disservice to herself and to them, and that's, as I said, the tragedy. The girls are just trying to liberate themselves, and her values and her pain is alien to them and anachronistic. She could never communicate to them the baggage she's carrying from the rat-run streets of Victorian London, anyway. Even if she could, it would be lost in translation. And that is apt to today, with the older generation, because of the new industrial revolution, it is harder for the older generations to communicate with us younger women, like the women who are just straight out of college, and to give them the tools and arsenal to cope with modern life, because it is so alien to them.

It's like how, in terms of the Me Too movement, and the way older women in their fifties or sixties are not all embracing it, and are saying, "I navigated an incredibly sexist world because I'm strong." They don't see that the movement is not a denial of their struggle or achievements, it's more we can make things better, so why not?

I agree with you. It's this idea of getting more women in the corporate ladder, in the boardrooms, my industry and your industry. These women that fought to get to this place, they have to make the changes. There has to be an evolution. You have to say, "No, the culture must and will change." And it doesn't take away what they have achieved, but it needs to become anachronistic. We need to have that culture change. You're right, the gap between Hester and those girls is the same. I hope you feel that when you watch it. There's not a lot of dialogue—and that's the amazing thing about Picnic at Hanging Rock, there isn't actually a lot of dialogue. But [in episode six] what you read on Hester's face, I was trying to communicate an acknowledgment, that she sees herself and that she understands what she did. Therefore, she goes back to herself and makes the choice that she makes. There is a moment of recognition.

Picnic at Hanging Rock will premiere on Amazon Prime on May 25.