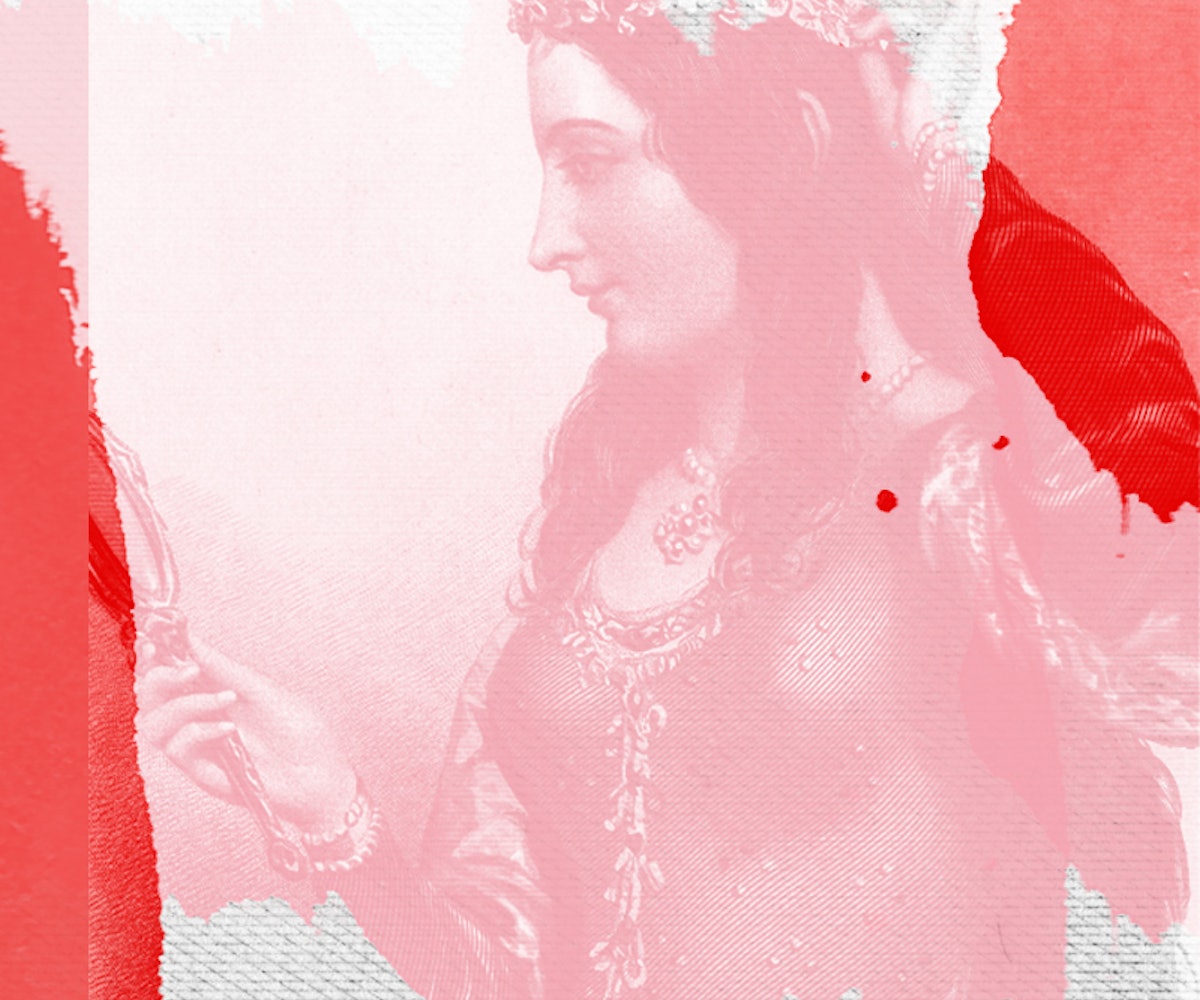 My ovary died at a nightclub in Berlin. This, anyway, is how I like to frame what happened to me one weekend in July. It's what I say to people because I like to make light of a painful situation. And it's not untrue: After dancing away one midsummer Sunday inside Berghain, Berlin’s premiere techno institution, I felt a cramp on the right side of my lower abdomen that I attributed to, well, having been dancing for hours. But by the middle of the week, I was in a hospital room, recovering from surgery that removed an ovary that had died inside of me. The club had nothing to do with it, and scarily, neither did the fact that, though I was 21, I had never officially seen a gynecologist before. To complicate the situation, for a few months prior to the surgery, I had been seeking treatment for an eating disorder that I developed as a young teenager. So for better and for worse, this reproductive emergency became my wake-up call to take care of myself.

Guilt and shame about my ED had caused me to ignore warning signs of impending ovarian doom. Similar pain to what I would feel in Berlin brought me to an emergency room in April, but doctors found nothing wrong. Having binged the night before, I blamed myself and didn’t push it. When, a few weeks later, my monthly period was abnormally chunky and nearly black, I still didn’t think to call a doctor. It was only months later, with the pain of necrosis (literally the death of all the cells and tissues in an organ), that I ended up under the gaze of a gynecologist.

After the mild onset of pain that Sunday, I kept ignoring it until Tuesday afternoon, when it went from mildly nauseating to terrifyingly debilitating in the course of a three-stop ride on the U-Bahn. Unable to stand or to stop whimpering, I had a friend call me a taxi to the nearest Krankenhaus (hospital), to begin an hours-long search for the problem. Ruling out appendicitis and digestive issues, a doctor finally helped me into a gynecological exam chair and probed my uterus with a transvaginal ultrasound (or as I like to call it, the “ultrasound dildo”). She identified a large mass, an ovarian cyst on my right ovary, and suspected that it had twisted my ovary around the fallopian tube, a condition called torsion. With the agreement of a second opinion, I was lying on a stretcher, descending in an elevator to an operating room. The next morning, another doctor showed me laparoscopic photographs of the blackened mass that was my ovary. The torsion had cut off the blood flow, killing the ovary, forcing surgeons to remove it, a procedure called an oophorectomy.

Torsion is a relatively rare medical condition, tending to affect women in their 20s and those who are postmenopausal. It usually involves a mass on the ovary, like a tumor or a cyst; however, in pediatric patients, torsion occurs on “normal” ovaries more than half of the time. Patients with torsion are three times more likely to have cysts than those without, and nonspecific physical symptoms make diagnosing torsion notoriously difficult. Plus, ovaries can twist and untwist on their own. If it’s caught early enough, the ovary can be surgically untwisted before torsion causes necrosis.

Ovarian cysts, however, are more a common condition. There are different types of cysts, and they often come and go without causing problems. These form in the follicles during or after ovulation and some are associated with endometriosis. Polycystic Ovarian Syndrome (PCOS) is related to a hormonal imbalance and unrelated to the kind of cysts that cause torsion. Doctors can find cysts during routine pelvic exams, vaginal sonograms (the "ultrasound dildo"), or through laparoscopic surgery. Johns Hopkins Medicine’s website urges women who have been diagnosed with ovarian cysts and “experience sudden, sharp abdominal pain, fever, or vomiting,” to see a doctor immediately.

Common as ovarian cysts may be, I was still surprised and confused to hear that, of all things, ovarian torsion was the cause of my pain. After years of binging and purging, I would have expected that my bulimia had caused it. After all, some adverse health effects related to bulimia are electrolyte imbalances and dehydration, gastric rupture while bingeing, inflammation and rupture of the esophagus, tooth decay, and peptic ulcers. At the moment when I was finally willing to face that my ED had been harming my body, something else went wrong entirely. (Luckily, I got away from bulimia with just the tooth decay.) But was there any relationship between my ED and my reproductive rebellion?

A number of researchers have looked into the relationship between eating disorders and reproductive health. Perhaps the most well-known link is the tendency for anorexic patients to experience amenorrhea or the loss of monthly periods. In fact, it was only in 2013 that the American Psychiatric Association, with the release of the DSM-5, removed amenorrhea from the diagnostic criteria for anorexia, although it remains a common symptom among anorexic people who would otherwise menstruate. A 2004 study found a potential link between bulimia nervosa and “hormonal dysfunction, irregular menstruation, and infertility.” And obstetrician and gynecologist Ginny L. Ryan, MD, Assistant Professor of Obstetrics and Gynecology at the University of Iowa Carver College of Medicine, tells me frankly, “Reproductive health has a lot to do with eating in general.”

In 2009, Dr. Ryan co-published the article “Eating Disorders in the Obstetric and Gynecologic Patient Population,” which suggests that “ob-gyns have the opportunity to play a vital role in prevention and diagnosis of eating disorders and in the multidisciplinary management required to effectively manage these disorders.” It raises the question of whose responsibility it might be to identify EDs in children and adolescents, a group that might not have the proper tools to handle it on their own; and proposes a doctor as a figure that may be able to intervene.

A July 2016 article, published by Christina L Boisseau at the Warren Alpert Medical School of Brown University’s Department of Psychiatry and Human Behavior, suggests that gynecologists should undertake routine screening for eating disorders with all their patients. A screening might help some people, but disclosing an eating disorder to your doctor can be a difficult thing.

An ideal relationship with your ob-gyn, Dr. Ryan tells me, should be based on trust. The more they know about your overall health, the better they can help you with specifics. Having an eating disorder can come with extreme secrecy and shame, so ultimately, those affected might have trouble putting it out there, and it takes a sensitive doctor to probe such an issue. A 2014 study from Ryerson University in Toronto questioned whether “the next generation of physicians [are] adequately prepared to diagnose and treat eating disorders in children and adolescents,” and found that medical residents were uncomfortable with the assessment of eating disorders in young patients, and even less comfortable with knowledge about how to treat them. But still, disclosing an ED to a doctor will never result in negative consequences.

“I can’t think of any instance in which disclosing your ED would hurt. It shouldn’t bias a provider, and shouldn’t raise insurance premiums,” Dr. Ryan says. “I would encourage anyone with an ED to disclose that to your doctor. It might have little to do with what’s going on, but it could be very helpful.”

When exactly someone should first see a gynecologist isn’t written in stone. Some go when they get their first period, others wait until they’re ready to give birth. It’s a matter of listening to your body, and making sure to get anything abnormal checked out. The American Congress of Obstetricians and Gynecologists suggests that people with vaginas should see an ob-gyn between the ages of 13 and 15.

Monitoring your health with a doctor you trust is as important to self-care as eating right, although both of these things aren’t always easy. To overcome an eating disorder, it is necessary to seek help, and reaching out to someone is a courageous first step. Whether this person is your gynecologist, a friend or family member, a university therapist, or a helpline, like the National Eating Disorder Association’s free and confidential one.

In the throes of bulimia, I couldn’t picture my life past 25. I wanted to be someone else, or not to exist at all. My motivation to change was realizing more and more what kind of harm my ED was causing me and how it was keeping me isolated from those around me; with the help of a behavioral therapist, I was able to begin recovery. The ovarian bump in the road, mentally and physically traumatic as it was, made me all the more determined to continue focusing on self-care and health, as well as to add a good ob-gyn into my personal armory. There are, after all, plenty of ways my body—our bodies—might rebel, that have nothing to do with our own thoughts and actions, and it's important to remember that self-care isn't just about face masks and smoothie bowls. It's also about paying attention to what's happening outside and inside of us, and staying open to asking for help. At the height of my ED, I didn't realize what it was taking for me to continually work at keeping such a consuming secret; I knew eventually I would need someone—a friend, a family member, a doctor who could help open me up—I just never would have thought that person would be a surgeon in Berlin.