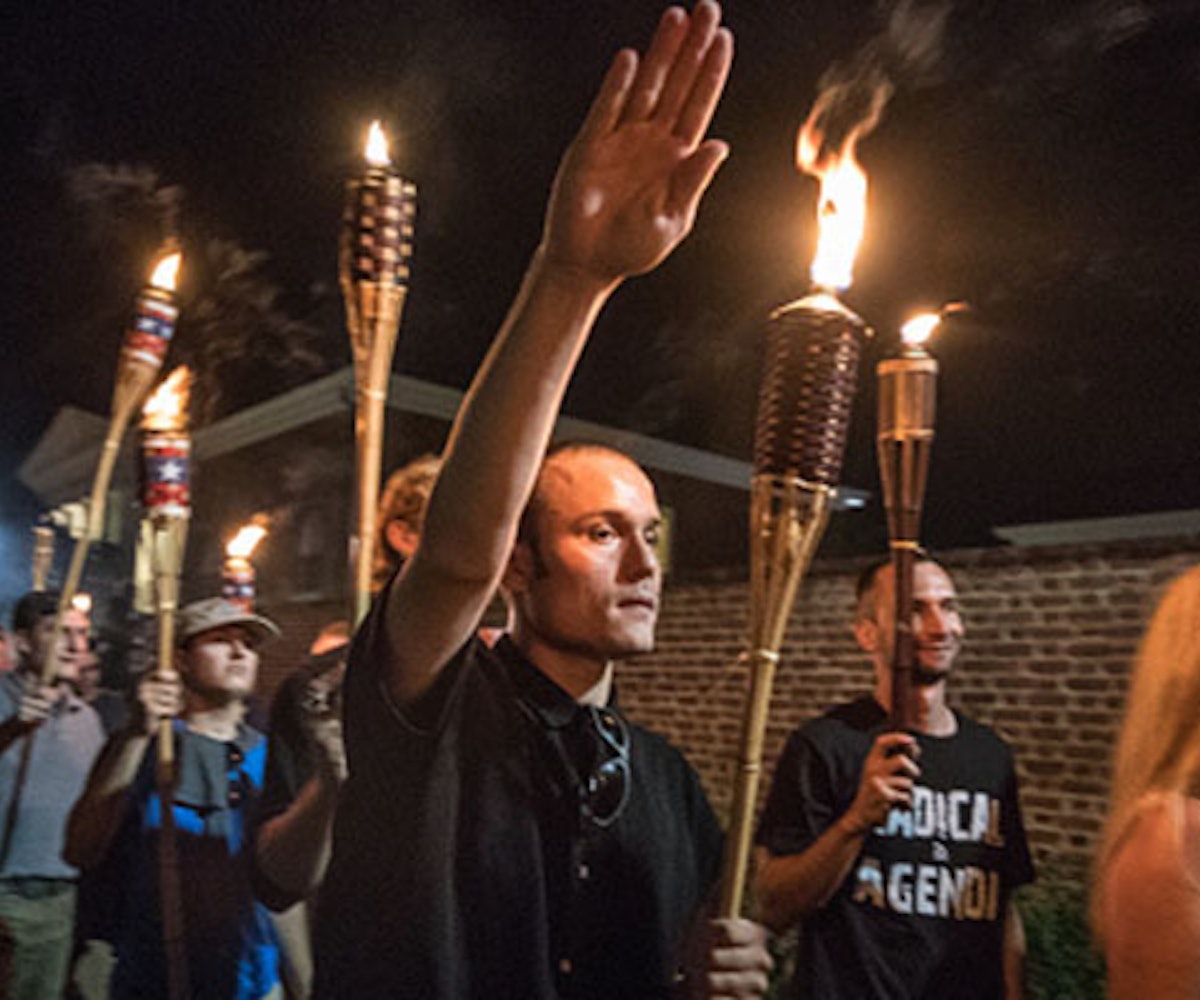 Over the weekend, The New York Times published a warm and fuzzy profile of a "white nationalist," which is in no way different from a white supremacist; for some reason, the Times reporter didn't feel the need to clarify that. "There were mixed-race couples at the wedding," Richard Fausset writes of the neo-Nazi, as if this fact somehow makes his desire for a white ethno-state not that bad after all.

Fausset writes of the bigot's favorite restaurants and bands. He writes about the car he drives, his "non-violent" tattoos, his wedding registry. He recounts the white supremacist's glowing comments about Hitler. “I think he was a guy who really believed in his cause,” he said. “He really believed he was fighting for his people and doing what he thought was right.”

What Fausset was so perplexed by was the fact that this flaming racist was a seemingly "normal" person. But that fact would only be surprising to a white man. Any woman or minority in this country doesn't have to stretch their imagination to picture what a bigot looks like—they're everywhere! They're shopping at your local grocery stores because even Nazis need sustenance to survive. They're watching Twin Peaks because it's a really good show. They're doing "normal" things because they're human beings. That's what's terrifying. They're your neighbor, just one that might want to kill you.

Fausset writes that the Nazi's "Midwestern manners would please anyone’s mother." It's pretty obvious he means anyone's white, gentile mother, but he leaves those descriptors out. In fact, at no point in this profile does Fausset even attempt to put himself in the shoes of a minority. At one point he says the Nazi embraced fascism in the same way a hipster embraces "the most extreme of musical subgenres." A woman was killed at the white supremacist rally in Charlottesville, Virginia, this summer, a rally that this neo-Nazi attended. It's ignorant and cruel to compare this kind of violence to a hipster hunting for a rare record.

While the man profiled was a neo-Nazi—he regularly speaks on Radio Aryan and owns swastika-covered merch—that word is never used. Fausset notes that he's a member of the "Traditionalist Worker Party." It's this kind of veiled language and sympathetic description that humanizes these racists. It makes Nazism seem like a harmless hobby one can pick up and perform in the garage on the weekends.

In a follow-up story, Fausset admits he was stunned to learn that someone well-educated and raised middle class could be racist. "Why did this man—intelligent, socially adroit and raised middle class amid the relatively well-integrated environments of United States military bases—gravitate toward the furthest extremes of American political discourse?" he writes. He "hoped the answer would fall" into his lap. After all was said and done, he was still left with the question: "What makes a man start fires?"

Well, sympathetic profiles about white supremacists don't help. If the man starting the fire looks cool in a flattering profile in the Times and is regularly referred to as a "foot soldier" for his cause, someone else will want to start a fire with him and join his "movement." Giving a Nazi a megaphone, without criticizing him and denouncing his flawed beliefs, will only encourage more Nazis.

Many people pointed out it should be the victims of hate that we focus on—people of color who are targeted by violence from white supremacists every day. During the Holocaust, Nazis referred to Jewish people as "rats." In order to hate as much as they do, white supremacists need to view other demographics as subhuman. More full, well-rounded depictions of people of color would help humanize those that are in real danger, those that deserve our sympathy. We don't need to sympathize with the neo-Nazis.

"We regret the degree to which the piece offended so many readers," the Times national editor, Marc Lacey, wrote in a piece addressing the backlash to the profile. "We recognize that people can disagree on how best to tell a disagreeable story. What we think is indisputable, though, is the need to shed more light, not less, on the most extreme corners of American life and the people who inhabit them."

Shed a light on them, yes, but don't dedicate a couple thousand words to how they're just like you and me. If you're going to profile a white supremacist, don't have a white man do it. Have someone who is directly affected by their violence and bigotry instead. People of color in this country don't need to travel to New Carlisle, Ohio, to realize racists, too, like tacos and stand-up comedy. Editors of one of the most powerful and widely read publications in this country should know that.