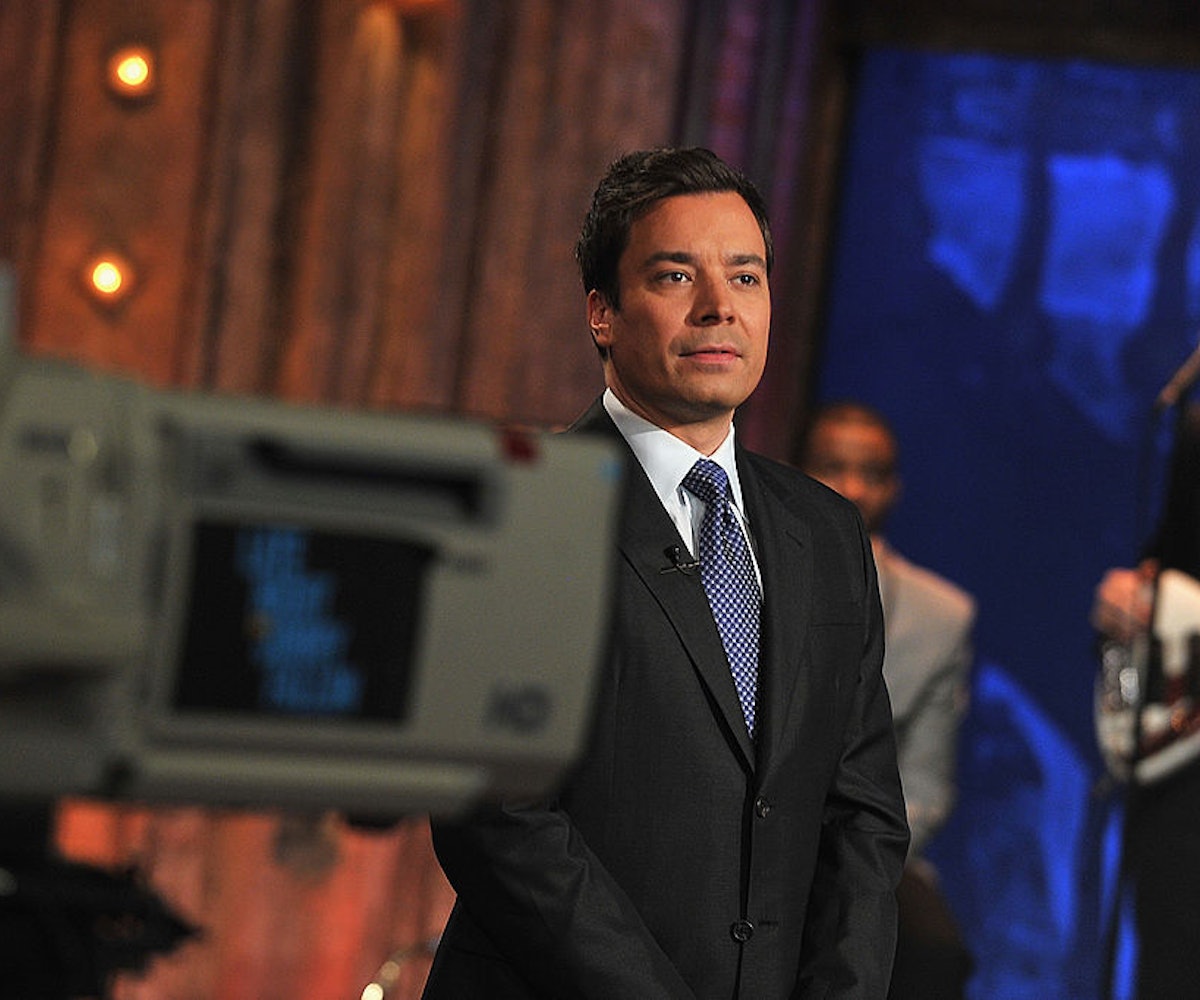 Photo by Theo Wargo/Getty Images
by Kristin Iversen
May 19, 2017

Accompanying the recent New York Times profile of Jimmy Fallon is an image of the Tonight Show host in which he is depicted "arriving to work at 30 Rock," home to the Tonight Show soundstage. In the photo, Fallon is wearing a casual gray polo shirt and a pair of wrinkled pants, in which his iPhone's silhouette is clearly outlined in the right front pocket. He is carrying a briefcase, his arms are jauntily akimbo and matching his stride, and he sports the kind of earnest and eager grin of a kindergartener entering his first day of school. Fallon, as the Times caption points out, is 42.

The effect of this photo, and of the article itself, is to demonstrate the essential goodness of Fallon's character, his overall affability, all the ways in which he is just a regular, hard-working, and—most importantly—"nice guy." A year ago, the idea that Fallon would be in need of this type of image rehabilitation would have been unthinkable; Fallon's ascent from Saturday Night Live cast member to beloved talk show host (with a multi-year plateau in between as a middling film actor) was well-known, and, as many thought, well-deserved. As the latest host of the Tonight Show, Fallon was getting extraordinary ratings and breathing new life into the predictable routine of late-night television. The host had an uncanny ability to come up with bits that would go viral online and, as a result, was not only attracting a younger audience to a genre that had skewed quite old demographically but also transforming its long-held format, by deprioritizing the traditional monologue and putting emphasis on newer elements. It wasn't just that Fallon was changing late-night, he was redefining it. He was untouchable.

And then Donald Trump came along. Among the many, many things that Trump has ruined on his road to the presidency, surely the reputation of Fallon is among the least important, and yet it still bothers the host. The inciting incident occurred on September 15, when then-candidate Trump visited the Tonight Show and engaged in the predictably banal and goofy banter that generally ensues on shows such as these; the interview culminated in Fallon mischievously ruffling Trump's hair, as if Trump were some benign personage, rather than a man running one of the most divisive and despicable presidential campaigns in U.S. history.

As the Times notes, the interview was followed by a "barrage of negative social media posts [that] gave way to damning appraisals in publications like Variety," with most people puzzled and furious over the way in which Fallon fawned over Trump. Fallon now insists that he wasn't trying to "humanize" Trump, but rather did it "almost to minimize him." The damage was done, though, and Fallon was viewed with skepticism and disgust by millions of Americans, who began to see an inescapable smarminess in Fallon's demeanor and an unwillingness to risk viewers by taking strong stands. Fallon's apolitical demeanor also stands in stark contrast to his late-night competitors; both Stephen Colbert and Jimmy Kimmel have spoken out vociferously against Trump and his policies, and while both have faced backlash from conservative Americans, they stood strong in their anti-Trump stances.

Fallon, though, rather than reassess his stance on Trump, or even question why people were so upset with the way he basically flirted with a man who had been engaging in blatantly racist and xenophobic political propaganda on the campaign trail, doesn't appear to really be thinking about why people might have been hurt by his normalization, and just feels personally assaulted. As he tells the Times, "I’m a people pleaser. If there’s one bad thing on Twitter about me, it will make me upset. So, after this happened, I was devastated. I didn’t mean anything by it. I was just trying to have fun.”

"Just trying to have fun" is pretty much the rallying cry of every self-described "nice guy," who is trying to wiggle out of being called out for questionable behavior. And so it's no surprise that it's Fallon's defense now, seeing as how Fallon has long set himself up as the ultimate "nice guy," the sort who is just interested in having a good time and making people smile, and who doesn't know how to handle it when people are hurt by his actions. In the nice guy's mind, everything he does is in the pursuit of being nice and of making people smile and laugh; he thinks he's doing it for you, for us.

This isn't true, though, and that's clear in how Fallon characterizes his feelings following the Trump debacle. The truth is, "nice guys" aren't making people happy in order to make those people feel good, they're doing it in order to make themselves feel good. "Nice guys" are narcissists who think that because they are trying to make the world better—via laughter, say, or wellness apps—and because they are the only ones who know how to do it, that we should all be thankful for them and stop criticizing their actions. They mean well, and isn't that enough?

Not even close. Our world right now is populated by "nice guys." In some cases, these "nice guys" are people like Fallon, whose actions actually do have the potential to affect many people in a profound way; Fallon frequently gets a pass from others, who say that, as an entertainer, he doesn't need to be political. But by hosting Trump at all, Fallon was engaging with the political sphere, and his playfulness with Trump could have signified to voters that the candidate was not as monstrous as he otherwise seemed. "Nice guys" populate the world of tech, too; they are men like Uber's Travis Kalanick, who, in an effort to create technology that he is certain will change the world for the better, engages in duplicitous, damaging actions, which negatively affect his employees, his competitors, and have ripple effects in the tech industry and beyond.

Other "nice guys" have even more power to inflict damage, all while hiding behind ready smiles and eager demeanors. Think of Jared Kushner, Trump's son-in-law who is now in charge of bringing peace to the Middle East, despite the fact that his most prominent job prior to this was destroying the reputation and quality of a once-vaunted New York newspaper (a hatred for the media is clearly something which father- and son-in-law have in common). Kushner, and his wife, Ivanka, were often talked about as being moderating and even positive influences on Trump; they were thought to be a potential stabilizing force in the chaotic maelstrom of the White House. But why was Kushner so trusted? Was it because he was a relatively good-looking, seemingly easy-going guy who probably knows how to make ready small talk? Was it because he just looked like a "nice guy"?

Probably, yes. As publicist Peggy Siegal told Vanity Fair for a profile on Kushner, "Besides being devastatingly handsome, he is well mannered, well bred, and so well turned out." In a word: nice. What this means is that Kushner seems unthreatening, even as he facilitates $110 million arms deals for Saudi Arabia, a country which has been conducting a horrific bombing campaign in Yemen for months now. The reason why "nice guys" like Kushner and Fallon are so dangerous is precisely because they work so hard to seem like what they're not, perfecting images of benign industry and innocence—even posing for photos in which they appear to be personifying a five-year-old on his way to school.

And Fallon? As he explained to the Times, his real problem with how his popularity has plummeted since he ruffled Trump's hair has little to do with how he might have hurt other people, and everything to do with how he himself was hurt. Fallon said, “If I let anyone down, it hurt my feelings that they didn’t like it. I got it.” We got it, too. And that's why this particular "nice guy" is currently finishing last in the ratings.

NEXT UP
Fashion
Jimmy Choo’s Collab With Timberland Gives The Classic Boot A Glam Makeover
Entertainment
Precious Pepala Is Going From TikTok Covers To Her Own Resonant Songs
The Art Issue 2022
From Renaissance To Gemini Rights: The Stories Behind 2022's Best Album Covers
Entertainment
Olivia Rodrigo Hinted At New Music In 2023