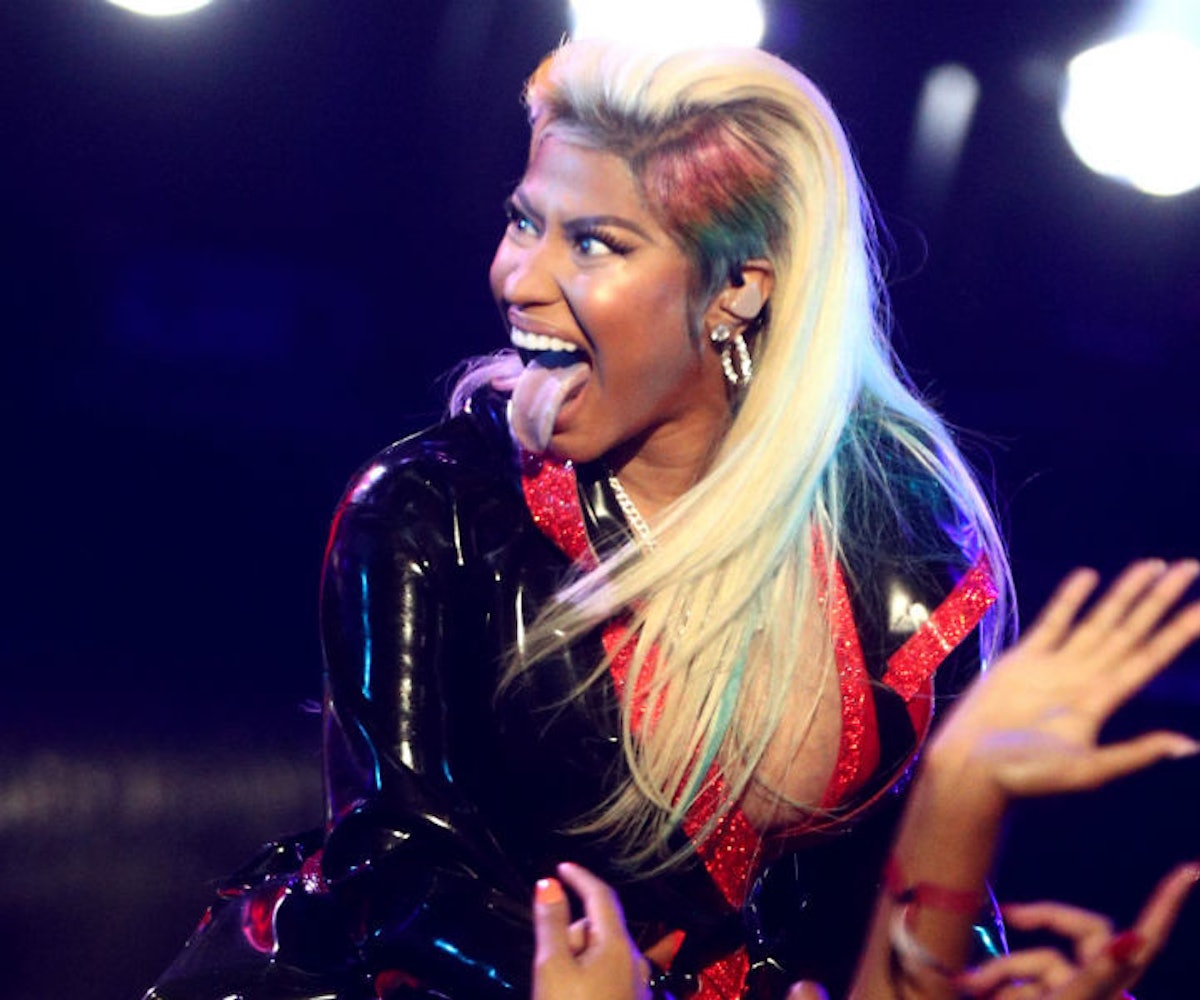 Let’s start with the most recent dust-up: the new 6ix9ine song featuring Minaj. Many—including primo critic of other female rappers, Azealia Banks—called Minaj out for collaborating with the rapper, who previously pleaded guilty to the Use of a Child in a Sexual Performance. Just prior to that, Queer Eye cast member Jonathan Van Ness expressed his disappointment with the rapper’s decision to appear on the cover of Russia's Harper’s Bazaar given how the country treats its LGBTQ+ citizens. He wrote on Twitter: “Russia has anti-LGBTQIA propaganda laws, Chechnya supported by Russia tortures its LGBTQIA citizens, and with you’re LGBTQ+ fans, you can’t even speak to this in this interview because it’s illegal in Russia.”

Both of these offenses, while unforgivable to some, are not exclusive to Minaj. Many male rappers have collaborated with 6ix9ine, yet Minaj is the only one who caught flak for it. As for the Harper’s Bazaar incident, both Rihanna and Kim Kardashian have appeared on the cover of Harper’s Bazaar Arabia, a region that has some of the worst LGBTQIA+ rights in the world. But, alas, that’s not where the Minaj drama ends.

Back in June, Minaj got heat for an interview with Elle in which she said that she was surprised at “how many girls were modern-day prostitutes,” essentially shaming sex workers and policing the sexuality of women, which many found ironic coming from a rapper who made a career out of being sex-positive and preaching women's empowerment. Perhaps most concerning as of late though is the way Minaj responds to anyone who dares have an opinion with which she doesn’t agree. After one Twitter user, Jerome Trammel, pointed out the hypocrisy between her Elle interview and the music she puts out, Minaj attempted to clear things up, but not before telling him to suck her dick, calling him an asshole, and telling him to “pop my dick outcho mouf.” She then proceeded to tell her barbz (aka her stanbase, and, hi to the barbz who will inevitably find this story) to “beat” Trammel “like he stole smthn.”

Another troubling incident happened earlier this month when freelance writer Wannan Thompson tweeted out her own criticism of Minaj. “You know how dope it would be if Nicki put out mature content?” she wrote on Twitter. “Not silly shit. Just reflecting on past relationships, being a boss, hardships, etc. She’s touching 40 soon, a new direction is needed.” The rapper wasn’t tagged in the post, nor was her full stage name even used, yet she caught wind of the tweet anyway and proceeded to slide into Thompson’s DMs with a wildly childish message. It reads:

When ya ugly ass was 24 u were pushing 30? I’m 34. I’m touching 40 ? lol. And what does that have to do with my music? Eat a dick u hating ass hoe. Got the nerve to have a Trini flag on ur page. You must not have heard the Pinkprint. Or pills n potions, bed of lies, save me, my recent feature with Alicia keys, Tasha Cobbs. Just say u jealous I’m rich, famous intelligent, pretty and go! But wait! Leave my balls! Tired of you sucking them.

After realizing she got her own age wrong, Minaj returned with a correction:

Both Thompson and Trammel said that they received multiple death threats from Minaj’s fans after their exchanges. Clapping back at haters and trolls is normal celebrity behavior. Rihanna and Lana Del Rey have practically turned the act into an art, but still, it feels different with Minaj, like she has taken things a bit too far. Her responses to Thompson or Trammel seemed designed for the purpose of riling up her fans, knowing they would do exactly what they did: attack. It feels like a conscious abuse of her significant amount of power, an example of punching down. And that's troubling.

Minaj’s talent is indisputable. The Pinkprint helped her become the most awarded female rapper ever, and she’s amassed a following rivaling those of Taylor Swift and Lady Gaga. She has 20 million followers on Twitter and another 89 million on Instagram. Minaj has managed to achieve commercial fame in one of the most misogynistic industries out there, and that should be applauded, but it’s 2018, and people aren’t as willing to put up with childish insults and cyberbullying. They’re not willing to put up with inauthenticity (just look at Katy Perry and Miley Cyrus). You’re going to get called out for working with a controversial artist because, well, a person with influence like Minaj should know better and hold herself to hire standards than others.

With Queen coming out in a couple of weeks, it’s hard to tell if Minaj’s recent string of antics is part of her comeback tour, just mere promotion—the perfect way to stir up sales is to stir up drama, after all. And she does need to stir up something: Her two singles “Chun-Li” and “Barbie Tingz” did decent, having reached No. 10 and No. 25 on the Billboard Hot 100, but they haven't done numbers like her past singles. Her song with 6ix9ine though has reportedly reached the number one spot on Apple Music, TIDAL, and YouTube. And, despite the backlash, just this week, it was announced that 6ix9ine was added to Minaj and Future’s upcoming tour. It's hard to imagine that Minaj will change her behavior then, seeing as how well it's working for her. Which means that the question on our lips has become: “Is this your Queen?!” It’s getting harder and harder to tell.