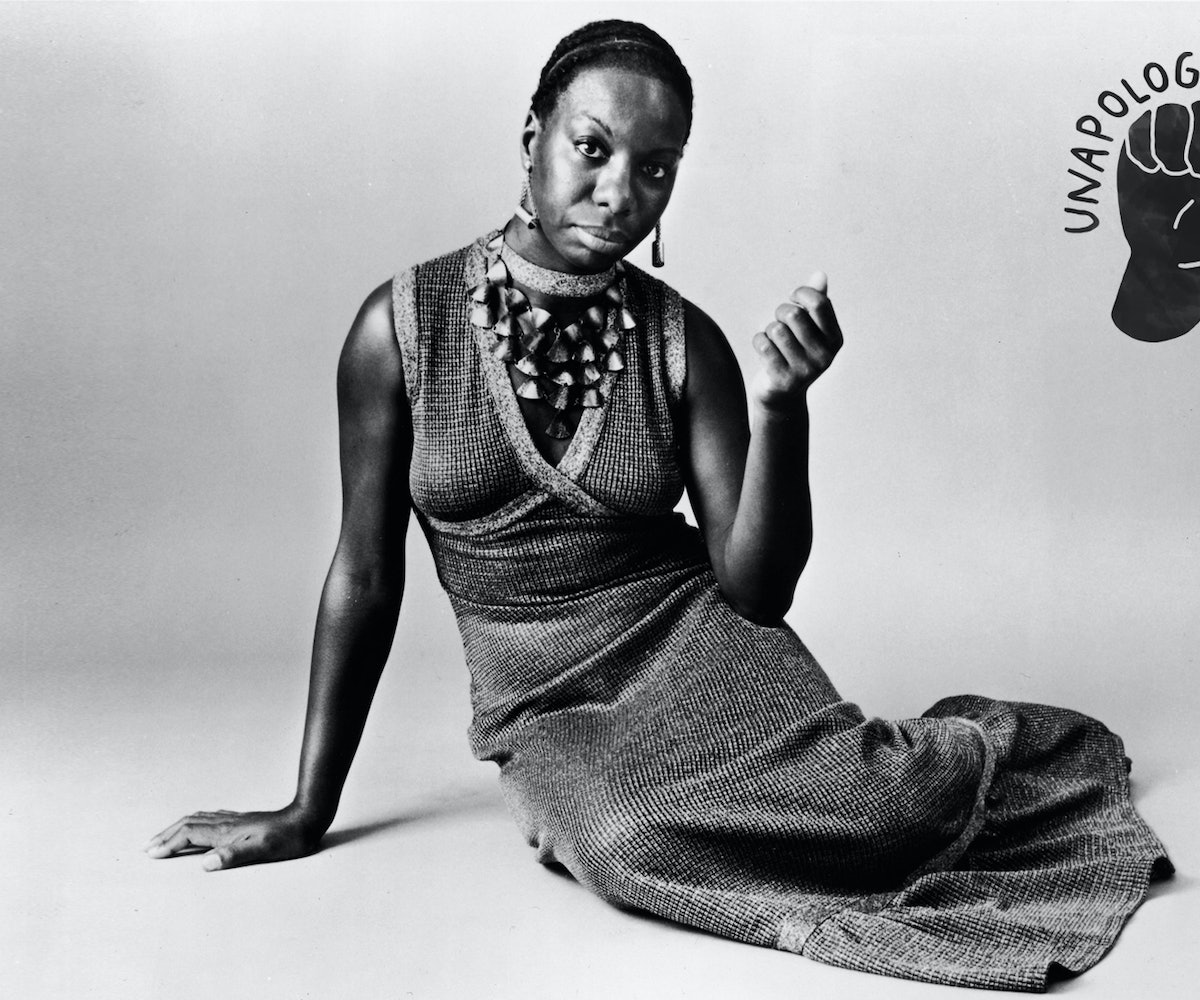 Kanye West once rapped, “People never get the flowers while they can still smell ‘em.” This sentiment can apply to many people in many fields, many artist in many genres. But, for now, we’re applying it to Nina Simone. The late artist passed away in her sleep nearly 14 years ago but, as of late, her name, music, and words are undergoing a revival. Three films were dedicated to Simone in the past three years, Kanye West borrowed her voice for a song off of Yeezus, and, most recently, Ford used her civil rights anthem, “I Wish I Knew How It Would Feel to Be Free,” in a commercial that aired during the Super Bowl. Some of these samplings were more tasteful than others, but they all beg the question: Why is everyone suddenly so obsessed with Nina Simone?

Jeff Lieberman, writer, director, and producer of 2015's The Amazing Nina Simone documentary, thinks several factors are at play, one being the passing of time. “After someone dies, there's a period of reflection, and that grants us the ability to summarize their life and figure out who they were, which is potentially why so many films came out a decade after her death, because people finally feel free to talk about her, but also can contextualize her,” he tells us. The other, perhaps most pertinent factor, is that the injustices of the Civil Rights era are being mirrored today.

“Her music and her message are as politically relevant today as it was in the '60s when she was talking about Civil Rights and lynching and the injustice and police brutality,” Lieberman says. “All elements that have come into the national conversation in such a bigger way in the last few years.”

Simone’s music was the Black Lives Matter message of the ‘60s. With tracks like “Young, Gifted, And Black,” “Mississippi Goddamn,” and “Strange Fruit” (originally written for Billie Holiday), she reflected the times and gave voice to the movement. She chose to be an activist during a time when other artists chose their careers over their convictions, a brave move that, Lieberman thinks, contributes to why musicians of today are so drawn to her.

“Most artists, when given the chance on the popular stage, often go the very safe route and hope that their art has longevity, and she didn't do that, and that's really to be respected and commended,” he says. “She really was doing exactly what she wanted to do and saying what she wanted to say. She was fearless and she was courageous and she was totally unique in that sense… She wasn't tainted by music labels or auto-tuning or commercial demands. Very few artists take the kind of chances that Nina Simone took, and I think that's resonating with a lot of people, both artists and audiences.”

But the same thing that’s drawing artists to her music now is the same thing that, Lieberman says, would turn Simone off about the resurgence happening. “It's awesome that she's everywhere, but I don't know if this is really how she would want her legacy used. Nina would love to have been recognized so widely, but I don't know if she would have appreciated her struggle being used to sell cars, for example.”

Or, even, to sell movie tickets. You might be thinking, well, isn’t Lieberman one of those people? Technically yes, but he used Simone’s own words and pieced together moments from friends and family to tell her story. He was very much committed to protecting her legacy as a musical genius and activist. Something that, he says, other movies like the Nina biopic featuring Zoe Saldana (which was met with a ton of backlash) didn’t do. “For other films to focus on her mental illness or her depression or, you know, the sadder moments of her life is the wrong idea,” he says. “I often say to people, imagine me making a film about the worst day of your life, and that being the way you're remembered. It's kind of like that.”

The Grammys is honoring Simone with a Lifetime Achievement Award this Sunday, partial evidence that she’ll be remembered more for her ups than her downs. But, it doesn’t go without notice that even an institution as distinguished as the Grammys is delayed in its recognition of the artist. Simone was nominated for 15 Grammys during her time, but only received the Hall of Fame Award for “I Loves You Porgy” in 2000, three years before she died. It shouldn’t take these larger cultural moments for the Recording Academy to recognize her impact on the industry, which is likely what pushed the award to the forefront. “How much more meaningful would [this award] have been 20 years ago?” Lieberman asks. “You know, her music was what it was 20 years ago, also, and for the recording academy to be recognizing her this late is maybe something that they should consider checking themselves on.”

Simone would’ve been 83 today. It’s hard to say if she would even show up to accept her Lifetime Achievement Award; the slow acknowledgment might’ve deterred her. But, we like to think, she would, if only to leverage her spotlight to give a Viola Davis-, Mahershala Ali-, or Meryl Streep-esque politically tinged speech. Simone was nothing if not radical about her rights, after all. In reflection, Lieberman tells us, “We had a screening of the film in D.C. not too long ago, and Nikki Giovanni, the first thing she said was, ‘If Nina Simone were alive, she'd be sitting on stage with a Black Lives Matter T-shirt on,’ and I think that's pretty powerful.”

Writer Germaine Greer once said, “Every generation has to discover Nina Simone. She is evidence that female genius is real.” This appears to be that time for millennials, and why it’s so hard to stay mad at the sudden reawakening of her work. You might know Simone’s music, but are unfamiliar with her story, which is where the various films come in. You might know her story, but are ignorant to her musical contributions, which is where the samplings and Grammys tribute come in. Simone’s impact, music, and credo are timeless, and while her political leanings are relevant now more than ever, her bravado and talent deserve to be acknowledged for decades to come.