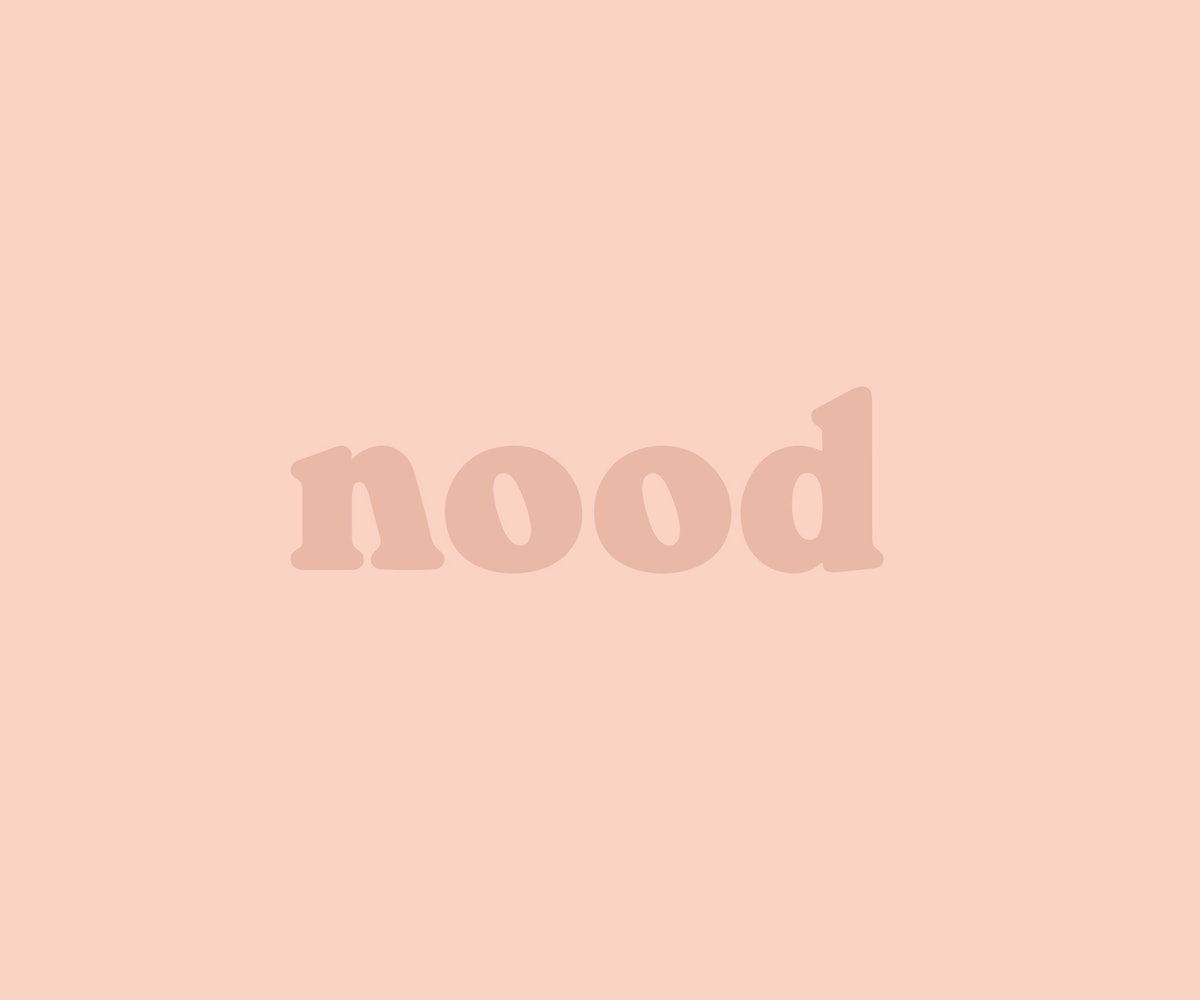 Photography by Atisha Paulson and David Pexton; Hair and Makeup by Amanda Wilson

For as long as the human form has been glorified in art, nudity has been more than a little controversial. No matter how progressive our society has become, there is still loads of room for improvement when it comes to treatment of the female body, which is alternately publicly exploited and banished from view. This reality is confusing and outrageous to many women, including Melina DiMarco, who is addressing this bizarre dichotomy with the launch of Nood, an app that "covers your ladyparts" with "body positive" stickers. Before you think it's a modesty-based app, get all images of fig leaves out of your mind; Nood covers up actual nipples with illustrations of nipples, subverting the idea of what is and isn't being censored.

The Philly-raised DiMarco laughs when she thinks about how ironic it is that she spent her childhood in Catholic school. "I think it's always funny when I talk to my parents about the work I do because they're like, 'We sent you to Catholic school! I don't understand!'"

The idea for Nood has always been in the back of DiMarco's mind since she graduated from the Pratt Institute in 2014. A majority of the work that went into her senior thesis was "making people feel more comfortable with saying the word vagina." During her time out in the real world post-grad, DiMarco was fortunate enough to link up with THINX and star in a variety of their period-proof underwear campaigns. "They made me just feel that everything I was thinking and internalizing was normal," she says. "I was like, 'Oh great, everyone is talking about their vagina so confidently. I love this.'"

This past summer, DiMarco sat down to develop the app and attempt to make Nood a tangible reality. The app isn't just for nipples either—Nood allows ladies to cover their "vag," "bits," "marks," and "perks," with a variety of colorful icons ranging from pastel pinks to rich browns and a range of textures for all the hair follicles.

Nood is so much more than an app, though. DiMarco believes that it's a movement where she can provide women with a safe space to display their bodies on their own terms. But that's not how the tech world sees it. Unfortunately, Nood has been rejected by both the Apple App Store and Google Play because it was labeled as "objectionable material." (You can sign the petition to get Nood in the app store here.)

Learn more about the inner workings of the app from the creator herself in our interview with DiMarco below.

Where did the idea for Nood come from?

It had selfish motivations at first. I was getting annoyed that Instagram was dictating what and how I posted. It got to the point where everything I saw to post was Xs or bars or cutesy hearts, and I was like, "I can't do this." It's not only hypocritical, but it was just annoying. When I started showing my own nudity and expressing that on my end, I was hit on Instagram with restrictions and oversexualized comments, but then I had my family. They expressed disapproval. I was like, "I don't get it! I went to art school, I drew nude bodies all the time, this is not strange."

There was this overwhelming feeling of guilt, like I was doing something wrong. That's when I started realizing that there is something wrong with the way we are perceiving female nudity. So I was very upset one day, and I was feeling this overwhelming sensation of guilt, and I thought, "If I just cover lady parts with lady parts, it would be okay." I think that's where the initial story happened. Then I was like, "Okay, now I need to figure out how to actually do this." I hunted down my roommate, who is a designer; I knew she was the perfect person to help design this and we just started working. Through that process, I began to realize that "wow, this is so much bigger than me just wanting to post my own photos on Instagram." So many women deserve to represent their bodies on their own terms, and that is Nood.

What would you say is the overall purpose of this app?

When I started developing it, I realized that it was not only a product, but it was going to be a movement. More importantly, the purpose of the app is temporary in my mind. I want women and all humans to use it any way they can to mainstream the idea that nipples are nipples, and they are not offensive and that there this double standard between male and female nudity... let's normalize it all! It's really a temporary solution in my mind. I would love to see many people using it on Instagram and on all social media platforms, but at some point, I feel like the guidelines between Facebook and Instagram need to shift. It needs to be revised on what's inappropriate.

Have you followed up with any of the platforms since you received that rejection letter from the App Store?

It's interesting because I thought we would have more trouble with Instagram than we would have with the App Store. I was planning to full fledge pick a fight with them, and then it turned out we couldn't even get into the App store. I do follow up with them, quite a bit, and we're kind of at a standstill because every time I talk to them, they kind of go in circles. There are apps in the store that are inappropriate according to what they are claiming my app is inappropriate for, everything is very oversexualized. There is an app called Perfect Girlfriend, and if you touch her, she responds. There's Dirtyemoji, where there are spread open vaginas and sex positions. Even when I asked to change the maturity level and content rating, they said no. I don't know where we stand in terms of getting in sooner rather than later. I'm hoping that if enough people want to use the app or show interest, we can actually get there.

Where do you see the future of how we perceive nudity on social media going?

It's such a complex topic. We've just sort of broken taboos with women and sexuality, talking about sex and pleasure for the woman. That's really great, but I think sometimes it's hard to break away from sexuality versus nudity. We often combine the two, when sometimes a woman can be nude, and it's not sexual at all. It's really hard to say. I am really just hoping that people have more of an open mind about the female body. It's not always about a woman wanting attention, or "that's all she has to offer." When I take my clothes off, it's because I want to express myself that way. There's a purpose. It's for myself and myself only. No one ever tells me to do that. I am hoping that people realize it's not just about showing off your body, it's about feeling comfortable and expressing yourself, and just so much more than wanting attention.

I think it's interesting when you think about how necessary trigger warnings are, but if you are going to an art museum, you're not being warned about all of the nudity. But when you're scrolling on Twitter or Instagram and a nude body pops up, people freak out. It's like you chose to follow these people, you should already have an idea of what they are posting...

We bring children to museums all the time, and we learn from these different artworks. I think it's really good for children to see those kinds of works. But there's some sort of disconnect when it comes to photography and social media where the notion is to protect younger children from seeing this. I think it's wrong to say that you can't see the female nipple, there's something wrong with it when that child was probably breastfeeding. When you are bringing negativity onto the female form, I think it's wrong to educate a child about anatomy or art or the body or females or males, any sort of knowledge in that respect. I don't really agree with that argument that we are protecting younger generations, I feel that we are kind of misleading them.

How do you feel about the way the whole #FreetheNipple movement is going? It's been around for a while, but it's lost a little traction.

I'm very grateful for the hashtag. I love hashtagging #FreetheNipple. I think if I didn't see #FreetheNipple, I wouldn't have even had some of these thoughts for the application. I'm grateful that we have influencers like that. My goal is to just to start creating solutions based off of that. That is what is important to me, so we can see a larger change in a way that females are perceived.

We have the petition going up, we have our Android version going to Google Play stores, so we will see if they reject us or let us in. And then it's all about trying to get social influencers and people interested in the app. I really just want to get it into people's hands so that they can enjoy it and use it for what it's for and, hopefully, we can start seeing that movement increase. In October we had a breast cancer awareness event and a lot of it was the Thinx team. They just shed off their T-shirts and they told us a story—it was really nice to hear all of their different experiences and relationships with breast cancer, and then to parallel that with the joy and vulnerability that was happening with our photographs was really powerful. Anything along those lines where I can bring together a community of people, that's just where my mind is going right now. That's all that is in store for now.