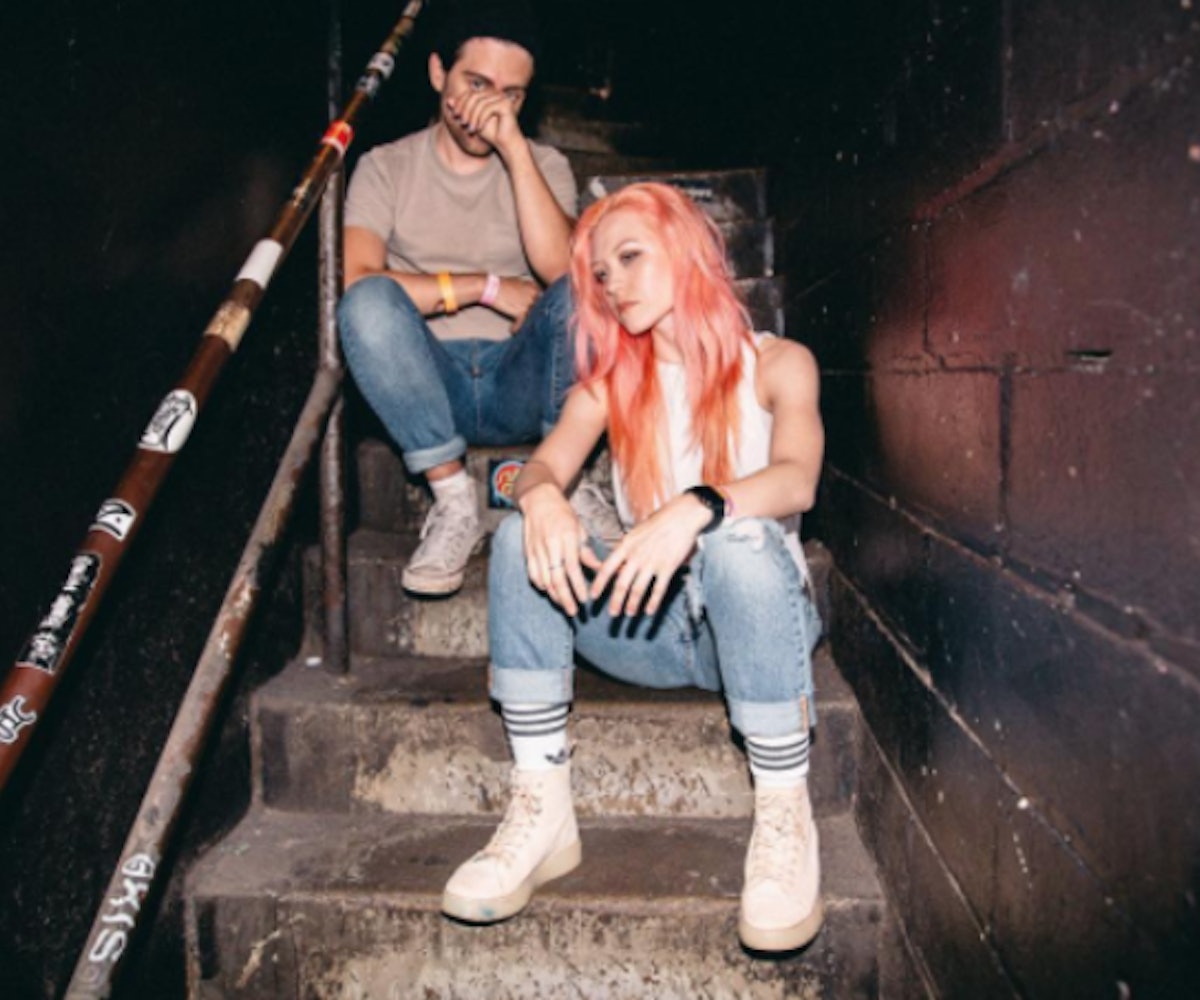 For the past 15 years, Now, Now have been quietly rising in the music scene. If you’ve listened to them, you’ve probably noticed sonic parallels to Death Cab for Cutie and Jenny Lewis. Since their start in 2003 as Now, Now Every Children, Cacie Dalager and Brad Hale have garnered quite a fan base for their emo-tinged indie-pop sound. In 2010, the then-duo shortened their moniker to Now, Now. Over the years, they’ve changed their lineup (most recently Jess Abbott of Tancred was a part of the band), but with their forthcoming record, it’s back to where it all began, just the two of them. And three years since their last record, Threads, Now, Now have a newfound confidence for songwriting and producing. “Threads wasn’t our first record, but it felt like our first record, so following that up, the second record is always a scary place,” says Hale.

While plans for the new album are still under wraps, Now, Now’s first single in over three years, “SGL,” the Alexa San Román-directed video for which we're premiering right here, seems to signal a new chapter for the Minnesota duo. It looks like Now, Now are (finally) teetering on the edge of the mainstream. Get to know the band after the video, below.

How is your forthcoming release going to be different from Threads?

Brad Hale: The amount of time that’s passed, and the reason it took us so long to get to this point, is because we needed to look within ourselves and find out what this next stage was going to look like, sound like, and what about music makes us happy and keeps us feeling creative. From my perspective, there’s a newfound truth and confidence in this batch of music. “SGL” embodies this new energy we found over the past three years.

Cacie Dalager: In terms of what is different about it, it’s the most true to ourselves that we have been yet. From a writing perspective, it’s the most honest I’ve ever been. I don’t feel a need to speak in such hyperbole. I find power in saying something, so that’s a big difference in me writing this.

Are you and Jess cool? Would you guys collaborate in the future?

CD: I wouldn’t say we’d collaborate creatively, but I’d say we’re all on neutral terms. It didn’t quite fit. We wanted to continually be doing different types of music.

What were you listening to when you made your latest batch of music?

CD: Shania Twain, Phil Collins, Britney Spears., M.I.A—M.I.A. has been a pretty constant thing for us—and a little bit of The Weeknd.

BH: Carly Rae Jepsen, Sheryl Crow. We listen to a large range of stuff, and I think our music shows that. There’s a lot of depth to the types of music that the songs that our songs explore, which is really interesting for us.

What was the biggest challenge for you guys to revert back to being a duo?

CD: To me, I didn’t see it as a challenge necessarily. When Brad and I started writing together 15 years ago, it’s always been the core of what we’re doing. People would come in and out of the band, but Brad and I stayed. Things were orbiting around what we started.

BH: We started working together in a really natural way. I don’t really remember how it started because it happened in such a natural way. I think the challenge for me was having the confidence to explore what really felt right to me after the Threads cycle. That jump was really scary for me. Not to say it was hugely successful, but we toured for a while. It was a big deal to us. Cutting that cycle off and being like, “What do we do now?” was the challenge for me. It was a big mental struggle for me to regain confidence as a songwriter, producer, and creative person in general.

Is there a theme to your record coming out?

CD: We can’t go too much into it because there’s nothing we can technically say because everything is up in the air at this exact moment. We’re shopping right now [for a label]. Literally, every element of it other than the songs themselves is up in the air. Every day is a new journey of where it might go or might not go. For me, in my life, love has been my religion. I’m not into any type of religion, but I’ve always been guided by love. That’s really the underlying theme.

BH: There is a theme to it, but I don’t want to say too much to the world until it’s presented as a whole.

Brad, you had your own solo project, Sombear. Would you ever revive it?

BH: I have a billion demos—I just need to put them all together and finish them. That hasn’t been my priority with finishing up this record, but I will—I want to. It’s just about finding the right time to put in the effort it deserves.

What do you think is the biggest difference fans will notice with your music when comparing it to your other music in the past decade?

CD: I feel like it would be a confidence.

BH: I think in “SGL,” it feels like us, but the songwriting is a little tighter. It’s a lot more forward and less hidden, which I think is really beautiful. The process of growing into that was really beautiful for me. That’s probably the biggest, most noticeable thing for me.

How long did it take you to write the forthcoming album?

CD: It’s a weird timeline; it was very scattered. I would say three years. A good year of that was us trying to figure out what we were doing. It was two years of figuring it out and a year of like, “We got it.”

Why do you guys feel like you’ve had such an impact on your fans for so long?

BH: I feel like the way that we started was really important to us—it being in the heyday of Myspace was really good for us. We really started from nothing and posting stuff; it naturally grew somehow. I’m not sure why, but I think we’ve always been really interactive and straightforward about the kind of people we are.

CD: I think we’ve been consistently pretty genuine with our personality and in our music. I think it’s easy to want to try too hard. It’s easy to say, “Everyone’s doing this thing, and it looks really cool, so we should do that too.” It’s easy to get sucked into trends. For better or for worse, we’ve done what we wanted to do. People can tell when someone is doing something true to themselves. In the beginning, we were creating a friend base.

BH: The first time we played in Chicago, we posted, “Anyone that wants to come out to a pizza party with us before the show, let’s do it.” Ten kids showed up, and it was really awesome. Some of them we’ve become friends with and keep in touch with. We’ve always been accessible to people.