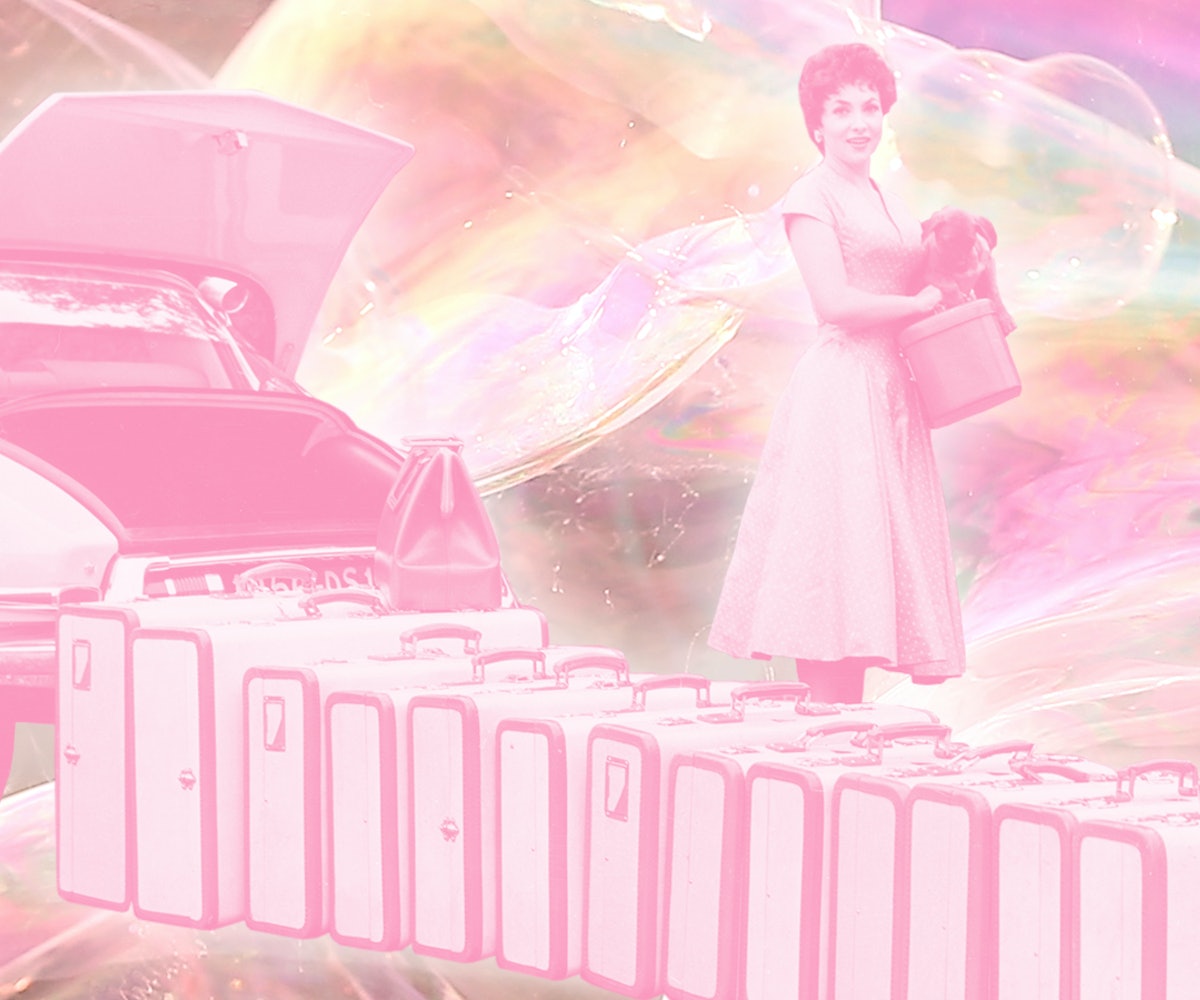 Back when our digital team was planning January stories, I knew that I wanted to plan some coverage of Berlin Fashion Week (which is happening now, so stay tuned). BFW showcases some of the coolest up-and-coming designers with street style that’s a totally different definition of “cool” compared to what we see in other European cities, like Paris and Milan. Style is somewhat fresher; it's quirky, yet minimal.

Then, while discussing possible stories, my boss asked me, “Why is everyone from Brooklyn moving there?” The question rang true: I’ve had a number of my creative friends leave for Berlin, visit for periods of time before (grudgingly) returning to New York, and plan a trip only to then not come back.

Never having been to Germany myself, I wanted to know what the appeal was. I reached out on Facebook thinking I would get back just a couple of responses, but instead, the amount of feedback and responses was huge—almost overwhelming.

Here's what I learned: First, it’s a hell of a lot cheaper to live in Berlin than it is in NYC.

“It’s fairly common knowledge that Berlin is a cheap city,” says Alyssa Buffenstein, a Berlin-based writer and designer, who made the move after finishing school in NYC. “My room in Friedrichshain is twice the size of my room in Bushwick, and less than half the price—and that’s on the expensive side of what I could be paying. It’s possible to not really think about budgeting and live here on, like, 10 euro a day.”

However, this is starting to change. Buffenstein explains that as Berlin rises in popularity amongst creatives, so do rent prices, or so she hears from longtime Berliners. “Squatting is no more, and people are getting priced out of their apartments,” she says.

Still, costs in Berlin are nowhere near New York City’s steep rent prices and generally expensive cost of living, which is a huge benefit of making the move. Anyone that lives in New York knows that rent is outrageous, and constantly struggling to keep up with work in order to make enough money to pay rent and survive, can take a toll on you. “It’s exhausting to work 40 to 50 hours a week just to get by [in New York]. I think that just burns people out after a while,” says Lauren Flax, a DJ, producer, and activist, who, while still based in Brooklyn, splits her time between there and Berlin. “Between paying out of your bum for a tiny room in a bad neighborhood compared to cheap rent for a huge apartment in Kreuzberg, the choice is easy.”

For creatives in New York, it’s pretty rare to get paid enough to live comfortably, with many having to take on second jobs or work extra hours in order to get by. The job market is also extremely competitive, making for an all-around stressful living situation.

However, in Berlin, there’s less pressure to have a serious job and more time to create—and live—off of your creative work. “In NYC, I worked in fashion with tons of shallow people who drove me insane,” says Michael Horowitz, a musician currently living in Berlin. “Here, I don’t work, I spend my time learning to code, learning German, and making music. The difference [between NYC and Berlin] is that there’s much less pressure to find a ‘good’ job because you don’t need too much money to live here."

Flax agrees, telling me that “it’s easier to live off art in Berlin as opposed to NYC, which is [Berlin's] greatest draw for a lot of people.”

Second, the quality of life in Berlin is higher than in NYC.

“There’s more time to stop and smell the roses,” says Andrew Fox, a songwriter, producer, and performer who left New York in pursuit of new musical inspiration, of VISUALS. He explains that the work pace in Berlin is slower and steadier, and you can even choose to not work at all. “There’s a strong sense of Berlin as a creative city, whereas New York is about speed, industry, networking—Berlin is about space and time,” he says.

It’s basically a total change of pace from life in New York. Becka Diamond, a DJ and photographer, explains to me that her lifestyle changed dramatically when she left NYC to move to Berlin. “I am still going out and working, but I have a lot more time to work on music-related projects and have personal headspace. NYC is nonstop—not that it's a bad thing, but a change of pace is always refreshing.”

Buffenstein told me a story of when she met a high-profile journalist from London while at an art world dinner:

He said to me, "Isn’t Berlin a city for slackers?" I was a little offended because I definitely consider myself someone who works hard, but that’s the New York hustle. I said, "No, people in Berlin work hard, just a different kind of work. They throw parties, they DJ, they make art." Then I realized, Berlin is totally a city for slackers—for a certain class of people.

For the most part, Americans in Berlin seem to be generally accepted. Son Le, a freelance photographer and writer who lived in Berlin for months after deciding to stay after passing through while traveling, explains how, much like New York, many people living in Berlin weren’t born and bred there. “It’s a city of transplants,” he says. “Older residents sometimes don’t get it, but younger inhabitants are accepting. Likely, they’re from another city or country too.”

Fox explains that the creative scenes in Berlin are both local and international, so Americans are part of that community as much as any other nationality. “The nice thing about living abroad is realizing that, as an American, I was just another piece of the puzzle.”

Of course, obtaining a visa isn’t the easiest thing, but it’s also not impossible either. While each respondent has had a different experience, ranging from a pain in the ass to a total pain the ass—it’s doable once you get everything in order. “It’s kind of a cross between applying for a job, applying to college, and going to the DMV,” says Horowitz.

However, if you’re looking to split your time between there and the U.S., or are just looking to check it out for a short period of time, you don’t need a visa. “I can legally be there for three months at a time without a visa, so it’s not impossible to do without them,” says Flax. “I think, however, this year I will end up getting a visa so that I don’t have to worry about leaving every three months."

I asked many of the respondents whether this week’s doomsday inauguration has affected their decision to stay in Berlin longer, and the responses were mixed.

For Buffenstein, she feels apprehensive returning to the U.S. under a Trump administration as a queer woman.

For others, the Trump presidency makes them want to come back—to fight. “It actually makes me want to stay in the States for more of the year,” says Flax:

I need to be on the ground here in order to fight, and the next four years will call for a lot of that. It’s obviously already begun with the GOP planning to dismantle the Affordable Care Act, and now we stand to lose federal funding for Planned Parenthood—and that’s just the tip of it. Honestly, it’s baffling that we have to fight for something so very basic. But, if I leave America, and a lot of other people do the same, imagine the America that will be left behind.

Le agrees that being here to fight back is what’s most important. “I’d rather try to stay and fix it somehow, rather than flee and gripe about it elsewhere,” he says. “Plus, we need camaraderie for this shitstorm.”

So, in conclusion? New York will always be New York—the beautifully bustling city where dreams come true and anything is possible (sort of)—but Berlin is basically a utopian dream for burnt-out New York City dwellers looking to live life at a slower pace with much less economic pressure. “At the end of the day, it’s just much warmer and more welcoming than NYC. It’s easier to be yourself here,” says Horowitz.

“It’s harder to be a weirdo in NYC these days; harder to pay the rent,” says Fox, adding:

It’s really hard to work a million part-time jobs or a full-time one and still maintain your creative practice and use the city to your advantage inspiration-wise. I think for people starting out, they look at the lifestyle they can have as international in Berlin versus as just another transplant, and it’s just more of an adventure. It’s weirder. People from cultures that you don't get to interact with in New York—even if they are here, hustling—these are friendly folks having a beer at Mauer Park with you. The art scene, music scene, film scene, design scene—they’re all very strong, and growing stronger, in Berlin.

Excuse me, while I begin packing my bags…