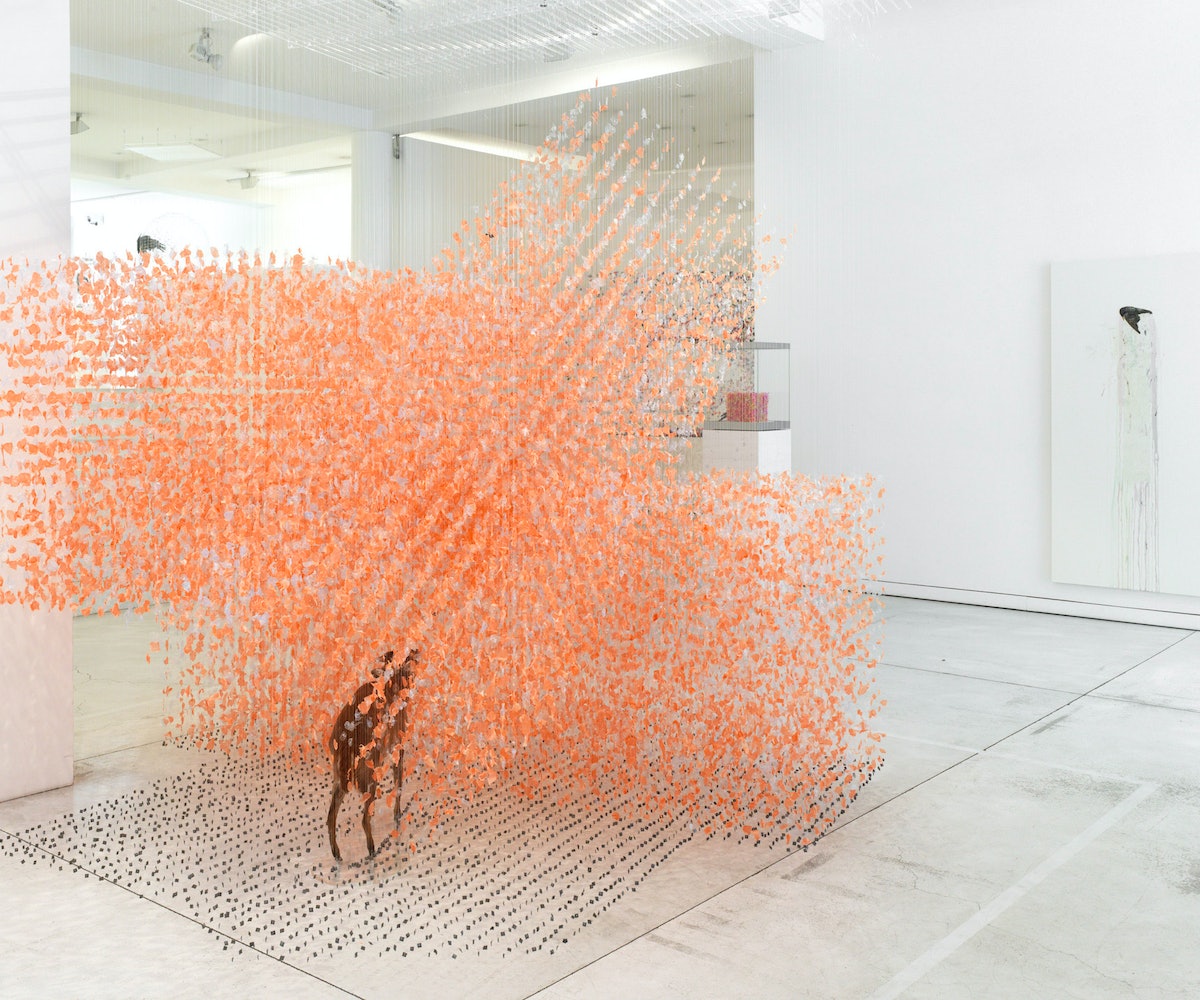 Claire Morgan, If you go down to the woods today, 2014. Image courtesy of Galerie Karsten Greve, Cologne, Paris.

“I hope it’s not too big for the room,” Claire Morgan says with a laugh, describing her massive sculpture, If you go down to the woods today. It will in fact occupy an entire gallery for her upcoming show, “Stop Me Feeling,” debuting this month at the Frist Center in Nashville. The U.K.-based artist’s works have been shown in group showcases in Miami and New York, but this display, which includes two small sculptures, two drawings, one painting, and the aforementioned installation, will be her first solo exhibition in the United States—and will (probably) fit in the space.

Morgan’s intricate sculptures tend to play with optics and are designed to look different from every angle, requiring the viewer’s effort to unpack the narrative of the piece. Doing so requires a methodical process, which includes the creation of mathematical, layered drawings as blueprints. “Once I’ve figured out an idea, the process of making the sculptures, in particular, is very climate-controlled, and quite clinical and factory-like, actually,” Morgan says. “It has to be, because they’re so precise and complicated—it’s not really possible to diverge from the original idea in the process of making the things and so everything is completely planned out on layers of tracing paper.”

The artist’s drawings, on the other hand, have less structure, allowing for more freedom in their creation. “The drawings I do, and particularly the canvases, are completely the opposite and are quite spontaneous,” says Morgan, who finds a way to maintain her systematic style while retaining artistic freedom. “The two sides of the practice are starting to diverge from each other, but also complement each other in terms of me having some kind of balance in myself and the way I’m working,” she says.

Like many contemporary artists, Morgan incorporates unconventional materials into her works, such as seeds, insects, polyethylene (commonly found in plastic shopping bags), and taxidermied animals. Trinita Kennedy, curator of the exhibition at the Frist Center, assures that Morgan’s approach to taxidermy is ethical: “She only uses animals that have already died—that have been hit by cars or killed by pest control—so in that sense they’re found objects.” Through this method, and her art as a whole, Morgan seeks to transform the way we think about mortality. “It’s about life and death,” she says of her exhibition. “Sometimes, whenever people look at the death aspect of it, they find it quite negative or morbid in some way, and I find that really difficult because that’s kind of missing the point of it.”

Nature, too, plays into the underlying themes of Morgan’s exhibition. In fact, the artist derives much of her inspiration from being outside. “Quite often I find that it’s difficult to get started in the studio. If I go outside and do something other than trying to think of new ideas, then usually something more productive comes out of that,” she says. Her method of mixing elements of the natural world with polyethylene not only serves the purpose of presenting an unexpected combination of materials, but also symbolizes our impact on the environment. “I hope the exhibition encourages people to think about their relationship with nature, and how we’re all part of one planet,” says Kennedy.

Morgan also has high hopes for the impact of the exhibition on its viewers. “I want people to make some kind of connection with the work,” she says. “So I suppose that would be desirable if people kind of reacted in a way that was open to the work, rather than making assumptions about it.”