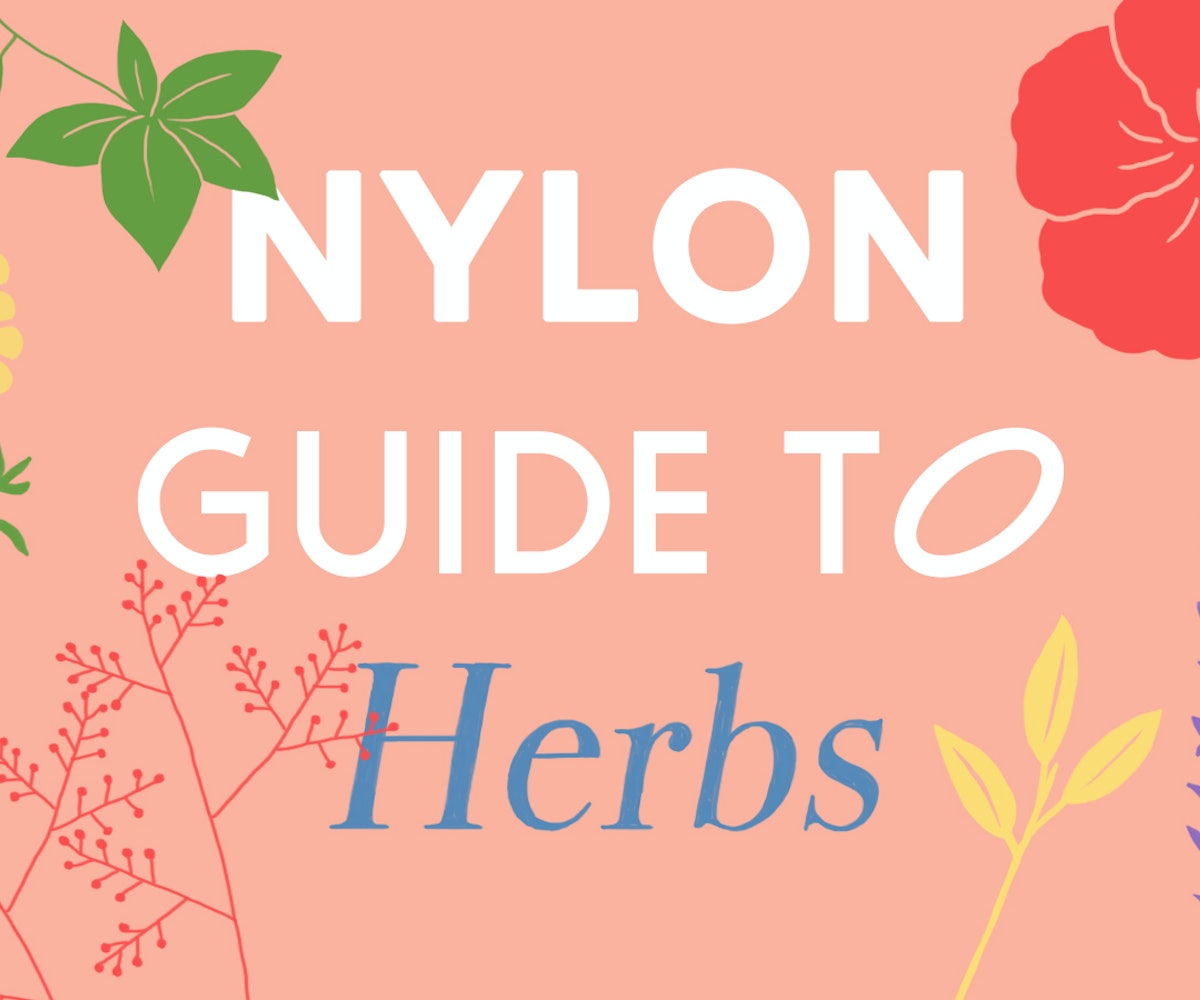 We’re no strangers to the fact that herbs can serve a much higher purpose than just making our food taste better. Within these powerful plants live numerous healing properties and potent health benefits to skin-care cure-alls. But, if we know anything about herbs, it's that their world is quite a big one, meaning there's a lot to learn. As an herb novice, where does one start? We reached out to expert herbalists and botanists to find out which herbs and plants are essential in order to make you a beginner’s guide of sorts.

Below, we outline 17 different herbs and botanicals whose benefits range from fighting inflammation and improving digestive health to fighting off skin woes such as blemishes and eczema. While not every herb is for everyone, read more about each one to find out which ones you should be incorporating into your wellness and beauty routines.

American Ginseng Ginseng is a pretty common supplement for a reason. Dominique Caron, founder of Apoterra Skincare, makes ginseng her go-to whenever she’s feeling low on energy, stressed, or in need of a mental boost. It’s an adaptogen that helps the body deal with stress, and studies have shown that taking it on the regular helps boost the immune system and mental performance.

However, one thing Caron points out is that ginseng is an at-risk plant, meaning it’s commonly used in commerce and is at the risk of a significant decline. Accordingly, she stresses the importance of purchasing ginseng from retailers who sustainably harvest it.

Black peppercornEmma Graves, co-founder of Brooklyn Herborium, is quite a fan of black peppercorn, as it has the ability to help the body increase the absorption of nutrients from the foods we consume, making it a welcomed addition to any meal. “The easy way to increase both the taste and nutritional value of any dish is to simply keep a grinder of black peppercorns by your stove or on your table and freshly grind just enough—not too much!—into your culinary creations,” she says.

Burdock rootAnother one of Grave’s favorites? Burdock root. Not only is it chock-full of nutritious compounds (vitamins, minerals, electrolytes, and more), it’s a great source of non-starch polysaccharides. What does that mean, exactly? “Starch polysaccharides feed your beneficial gut microbes without feeding the bad guys.” We all know how important gut health is.

Herbalist Vanecia Boone, aka the Lady Venus Magical, is also a big supporter of this herb. “It’s a blood cleanser and demulcent, meaning it will soften and relieve irritation of mucus membranes,” she says. While it benefits the liver, kidneys, and bloodstream, it's also great for the skin. “Oftentimes, when I was working in an herb shop, women who struggled with constant breakouts would experience significant improvement from taking this herb, as well as relief from eczema,” she says.

Graves and Boone suggest making a tea infusion out of it, though Boone also recommends a decoction or tincture. Be careful, though: Graves warns most people don’t find it tasty on its own, so you may want to add it to a tea blend.

Chamomile Chamomile is quite the multitasker, making it a must for Caron. It’s a mild carminative (aka it reduces flatulence) and helps aid digestion, so she suggests brewing a strong cup of chamomile tea after eating too much or if you’re feeling sluggish after a meal.

It also has strong anti-inflammatory properties, which makes it a powerful herb both internally and topically. Topically, you can use chamomile in many ways—from infusing it into oil for skin-care use (facial oils, balms) to using the flowers in a facial steam. Caron also suggests brewing a strong tea and using it as a compress for rashes and mild burns, or even refrigerating the tea to use as an after-sun spray.

CinnamonCinnamon is one of our favorite spices to add to everything, from teas to desserts, and it reaps many benefits beyond just being super tasty. Graves calls it the perfect companion to sweet treats, as it’s been shown to support metabolism by promoting healthy blood sugar levels.

Mona Dan, acupuncturist and owner of Vie Healing, suggests adding cinnamon to your diet if you feel that your body runs cold, which can be indicated by sensitivity to cold temperatures, pale complexion, and fatigue. It’s known to warm kidneys, which promotes a healthy blood flow, a perfect remedy for a cold.

Elderberries Feel a cold coming on? Elderberry is here to the rescue. Caron lists elderberry as a household mainstay during flu season, as it’s been shown in studies to decrease the length of the common cold. “I always keep a large bag of dried elderberries sitting around during flu season,” she says. “As soon as anyone in the household feels a cold or flu coming on, I make a large jar of elderberry tea by putting about a cup of dried elderberries in a large mason jar—with honey for taste—filling the jar with hot water, and letting it sit for one to two hours. When it's ready to drink, I strain and re-steep the berries one more time.” Consider this our new medicine cabinet (err, pantry) must-have.

GingerGinger, a great addition to any tea (especially when we’re feeling ill), is another great choice for when your body runs cold. According to Dan, it helps disperse the cold and warm the body. It’s also has a proven ability to fight vomiting and nausea, making it the perfect remedy to pesky stomach bugs or food poisoning (and hangovers!). It’s also been said to help relieve the day-to-day progression of muscle pain from exercise, making it a must have after a grueling SoulCycle class.

HibiscusHibiscus is another one of Grave’s herbal go-tos. “It’s a beautiful flower that’s used all over the world, for both taste and medicine,” she says. Its vitamin C- and antioxidant-rich properties are known to reduce oxidative damage, i.e. wrinkles and sun spots, and can also help relieve early symptoms of a cold. “It doesn’t take much for hibiscus to release its perky sour goodness, so one to two flowers or one teaspoon or less of the dried herb is enough to make an exhilarating tonic beverage.”

ImmortelleImmortelle is an herb that comes from the dwarf everlast plant and has powerful skin healing benefits. “It helps fade scars and reduce the appearance of skin blemishes by facilitating blood circulation just below the surface of the skin, which will reveal a more vibrant complexion,” says Hora. She suggests applying the oil topically to the skin or adding the herb to a tea to heal you internally.

LavenderLavender has long been admired for its calming properties, and Hora recommends it for a number of healing benefits, both mental and physical. She considers it the best herb to help relieve tired muscles and joints, while its oil can be used to soothe and heal a number of skin conditions such as acne, eczema, and burns. While it's common knowledge that its scent is calming, note that it’s more potent than you think. Aside from helping to relax and calm anxiety, lavender can also work with your nervous system to help alleviate migraines and insomnia. Try diffusing it in your bedroom before bedtime.

MintDan recommends mint for anyone whose body runs hot, which can be indicated by hyperactivity, restlessness, and the inability to relax. Mint has the ability to disperse stagnant heat in the body, combat blotchy skin, and promote an even skin tone. While you can incorporate mint into meals and tea (or, like, mojitos), you can also crush fresh leaves and apply to the skin in the form of a topical treatment with honey or rose water.

OatstrawOatstraw comes from the grass of the oat plant, and, according to Graves, it can help you reap some powerful beauty and health benefits. Since it contains silica, it helps keep your skin in mint condition by maintaining skin elasticity. The silica also helps the body absorb calcium and magnesium that are naturally found it oats. “Though it’s too difficult to chew if you don’t have four stomachs, it makes a lightly sweet and nourishing tea,” says Graves. “To get the most out of it, steep it strong and long—low and slow! Be sure to strain the tea or keep the straw in a small cotton bag, so that it can be removed after steeping.

RoseWhile roses are beautiful flowers and are often seen as symbols of love, this powerful floral offers plenty of very real benefits. “There’s a reason roses are so popular to give as gifts of adoration and appreciation, but they offer so much more than we allow them to express,” says Boone. The rose can affect your heart, your nerves, and your bloodstream, while also offering beauty benefits when used as an astringent on the skin.

“The fact that it's very high in vitamin C makes it a wonderful blood purifier to combat colds, flu, and toxins in the air while keeping you looking youthful,” says Boone. “My favorite part about this plant is that it’s a wonderful anti-depressant. During graduate school, I often struggled with anxiety, and my favorite remedy after a long day was holy basil and rose tea. It not only lifted my mood significantly over time but helped me rest better and helped my heart being light.” Boone suggests drinking a tea infusion (one cup daily) or a decoction simmered for five to 15 minutes, two to three times daily.

SageWhile we’re pretty used to seeing sage in the form of smudge sticks to help cleanse our spaces of negative energies, this herb can also benefit and heal the body in a number of ways. Boone suggests drinking it as a tea for its bold and strong flavor, but it can also be consumed or used in the form of a decoction or tincture. It’s been said to help uplift those with a dull or heavy spirit, remove the body of foul odors, and heal joint pain. “I remember meeting a lady who swore that sage was the secret to longevity and perfect health, and even once read a quote stating, ‘A man who has sage in his garden will never die,’” says Boone.

TurmericBoth Graves and Caron are fans of turmeric—as is the rest of the beauty and wellness world as of late. “It’s been getting a lot of attention for a good reason,” says Graves. “The health benefits are numerous and its unique flavor adds so much to a dish.” In fact, according to Caron, it’s one of the strongest anti-inflammatory plants in the world. Graves will heat turmeric into her cooking fat or add it to her eggs or chicken salad, while Carron likes to make homemade turmeric milk (adding it to coconut milk with cinnamon and black pepper) to fortify her digestive system. It’s quite the versatile cooking herb.

It also has many topical benefits. Due to its anti-inflammatory properties, Caron likes to make a turmeric mask by mixing one tablespoon with water, a hydrosol, or tea and leave on for 10 to 15 minutes before washing off. “Turmeric can stain, so beware!” she says. “I will usually do a turmeric mask at night so that if it gives my skin a slightly yellow hue, I have the night to sleep it off!” Noted!

White mulberry Dan recommends white mulberry for those who are plagued by dryness of the mouth, lips, and nose as well as dry, rough, or chapped skin. Due to its hydrating properties, it can be a savior for dry skin. It helps nourish the epidermis, aka the surface layer of the skin, and bring moisture and hydration down into the dermis level, the inner layer of the skin, for an extremely moisturizing effect. She suggests ingesting it by way of a supplement.