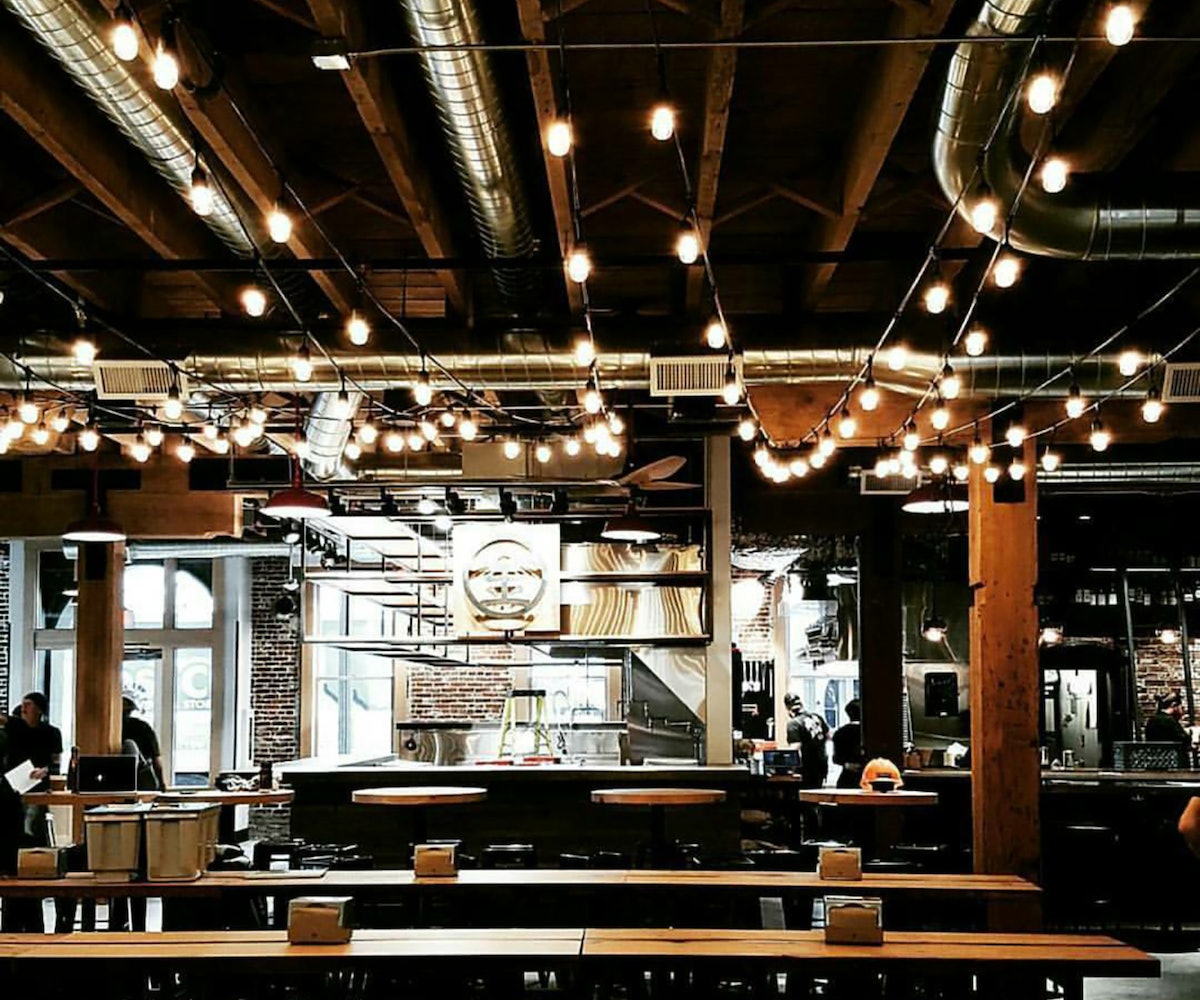 It’s hard not to fall in love with Portland. Its residents have devoted themselves to the good life, with a culture almost entirely devoted to the pleasures brought upon by good food, good drink, and the great outdoors. Surrounded by peaks and pines, Oregon’s largest city feels like a gateway to the wilderness, and yet it maintains a strong cosmopolitan vibe, thanks to an overwhelming array of preternaturally hip bars and restaurants and shops, all packed in space that is relatively small by big city standards.

In just a few days, it’s possible to feel like you’ve been everywhere and seen everything when in reality, you’ve only scratched the surface. Still, if you had to choose where to go, what to do, and, most importantly, what to consume while visiting this magical little town, here are some can't-miss suggestions.

Where to Stay: Kimpton Hotel Vintage

This subtly elegant hotel nestled in Portland’s main artery has built its identity around wine. If that isn’t enough to sell you on it, then a) we don’t know who you are anymore and b) allow us to tell you some more. The Vintage is specifically inspired by Oregon’s Willamette Valley, an oasis of red and white varietals that sits just 20 miles outside of the city. It is home to more than 200 wineries, and each of the 117 rooms in the Vintage is named after one. Each room comes with bottles specific to the winery from which it takes its name, and at 5pm every day, the staff hands out free glasses of vino like it’s Christmas. If you’re not in that grape of mood (see what we did there?), pull up to the Bacchus bar right there in the lobby, where the bartender Bryan, scientifically proven to be one the nicest people on the planet, will make effortless conversation while crafting you the perfect cocktail. But in case we haven’t made it clear yet, it’s all about the wine.

Many of Portland’s greatest restaurants began as food carts, and this rite of passage is perhaps best embodied by local legend Nong Poonsukwattana. Known around town by her first name only, Nong built her legend on her original cart, which wowed customers with its namesake dish, a deceptively simple serving of poached chicken on white rice, a soothing side of chicken soup, and some of the most flavorful sauce—a combination of fermented soybean, Thai chili, vinegar, garlic, and house-made syrup—that you’ve ever had in your life. Now, she has a brick-and-mortar shop, where she will greet you with a smile and chat you up behind the counter. There are other dishes available on the menu, but if you go there once, ordering anything else besides its eponymous showstopper would be nothing short of foolish.

Where to Eat: Pine Street Market

It can be argued that Portland, a city that basically transformed the food truck into a municipal mandate, does not need an indoor food hall. But that is exactly what it needs. Have you ever been to Portland? It rains a lot! Pine Street Market finally brings the food hall trend—which has gone nuclear in New York—to the city, with some of its most acclaimed chefs and restaurateurs opening outposts in the sleek and modern space, which they often use to test out new recipes. There’s the Tokyo-famous Marukin Ramen, gourmet hot dog joint OP Wurst, Korean street food purveyors Kim Jong Smokehouse, and Wiz Bang Bar, the soft serve and sundae outpost from the venerable Salt & Straw team. There are of course more stands (like the Israeli Shalom Y’all), but we can feel you getting hungry, so we’ll spare you. Just go.

Where to Eat: Blue Star Donuts

Most people will tell you that a trip to Portland wouldn’t be complete without a visit to Voodoo Doughnut, arguably the city’s number one tourist destination and creator of some wonderfully kooky treats. But those in the know will insist that the city’s best doughnuts belong to Blue Star, an expanding chain that was founded in PDX and specializes in avant-garde flavors like Cointreau Crème Brûlée, Passion Fruit Cocoa Nib, Blueberry, Bourbon and Basil, and Pistachio Cheesecake.

Where to Eat: Salt & Straw

No trip to Portland would be complete without a visit to one of this mini empire’s several locations. Founded in 2011 by cousins Kim and Tyler Malek, Salt & Straw made its name with an unwavering dedication to both quality and creativity, amping up traditional flavors like strawberry (with honey balsamic and black pepper) and chocolate (with Jacobsen sea salt and a complicated-sounding process known as “freckling”). For their ingredients, Salt & Straw often collaborates with local artisanal food suppliers, like their Coava Coffee & Cocanú Craque, which is done in partnership with Coava Coffee Roasters. And if you ever tire of their regular rotation of flavors—you won’t—then Salt & Straw offers a monthly selection of seasonal flavors. To give you an idea of how far they’re willing to go, this month’s roster of Halloween-themed flavors features the Dracula’s Blood Pudding, which is “a heady mix of spices and cream [that] are cooked into real blood pudding, with a hint of chicken liver.” Like everything else here, it’s delicious.

Where to Drink: Roadside Attraction

Some of the best bars around are the ones that feel like a secret still undiscovered by the rest of the city (and especially by its tourists). With its vine-covered exterior, this eccentric and utterly charming establishment can be easy to miss, but once inside, you’ll be in awe of what you’ve stumbled upon. The bar’s entrance is also its patio, a covered, cozy, and carefully curated hideaway with swinging benches, intimate nooks, and antique shop artifacts. Inside, it’s more of the same, except the lights are dim and the details are remarkable. It’s kitschy, yes, but that’s part of its very considerable charm. It’s the kind of place you tell your friends about, but nobody else. Luckily, we're friends, right?

Where to Drink: Teardrop Lounge

Every city has an iconic bar or three, and Teardrop Lounge is one of Portland’s. In a city as cocktail-crazed as this one, the Teardrop is one of the originals of the latest wave of cocktail bars, slinging painstakingly-prepared libations since 2007. Inside is spacious and handsome, with a circular bar that lets you see what the locally famous bartenders are shaking and stirring, which, if you’re lucky, is their famous piña colada, sadly only available in the summer months. Also, at $7 dollars for a selection of their cocktails, Happy Hour is can’t miss.

Where to Drink: Pepe Lo Moko

In Portland, Teardrop Lounge’s influence runs deep, and it can be felt strongly at this subterranean spot located underneath the Ace Hotel. That’s where you’ll likely find Teardrop alum Jeffrey Morgenthaler, bathed in a triumphant spotlight, making some of the city’s most renowned beverages. That includes their blockbuster the Grasshopper, which is made of the following: vanilla ice cream, sea salt, crème de cacao, and crème de menthe. Please order it.

It only stands to reason that a city that popularized ordering food from trucks does the same with shopping for clothes in double-decker buses. We give you Lodekka, a dress shop housed in a pastel-colored, two-floor bus that sells vintage dresses, pants, bags, accessories, and shoes found by the shop’s owner. (Fun fact: In keeping with the city’s spirit, the owner originally wanted to open her shop in a food cart. We’d call this an upgrade.) And as an added bonus, Lodekka is located right by Tasty n Sons, Portland’s legendary brunch spot. We suggest making an afternoon out of it.

Where to Shop: Union Way

This very impressive feat of urban development takes the traditional, turn-of-the-century European concept of a shopping arcade, and updates it with some very chic, very minimalist Scandinavian design. Running between Portland’s famous mega-bookstore Powell’s City of Books and the Ace Hotel, Union Way houses nine boutiques including Danner, Portland’s celebrated boot label, and Spruce Apothecary, which is exactly what it sounds like. You’ll also find Will Leather Goods, Steven Alan, Self Edge, and Boxer Ramen because shopping makes everyone hungry.

Where to Shop: Yo Vintage!

Located in Portland’s very pretty Nob Hill neighborhood, this equally pretty shop was founded by Sarah Radcliffe when she moved to the city from London in 2009. The former trend researcher and buyer brings her professional eye to this expertly curated online and IRL shop, with racks on racks on racks of one-of-a-kind items. Yo Vintage! also shoots its own lookbooks, gaining it some serious recognition outside of Portland.

NEXT UP
Culture
Scream 6 Trailer Brings The Nightmare To New York
Astrology
Get To Know Aquarius, The Certified Freak Of The Zodiac
Fashion
Collina Strada & Vans Team Up For A Chiller-Friendly Collection
Astrology
How to Use Astrology to Access Past Lives
Style + Culture, delivered straight to your inbox.