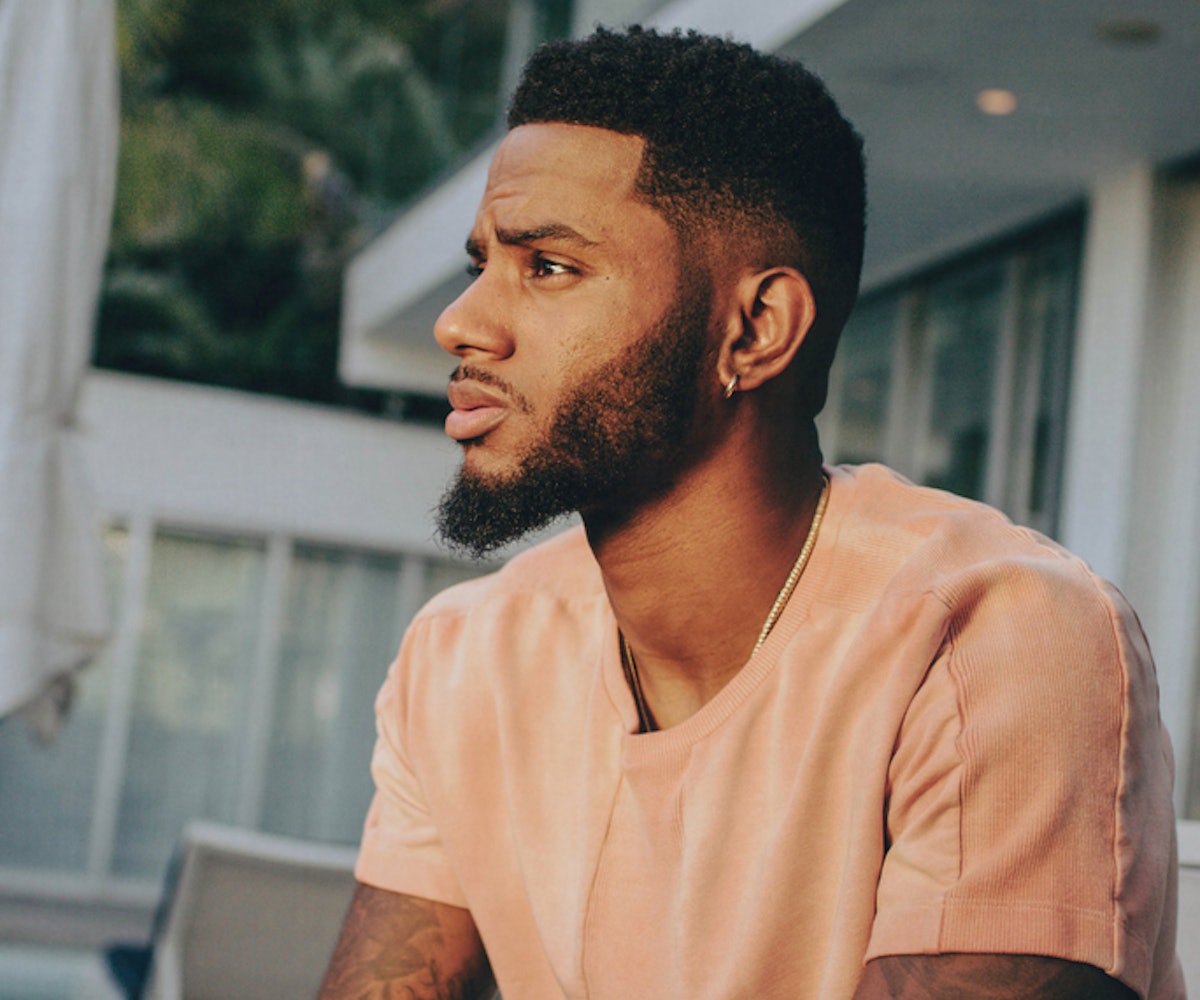 There’s an episode of Hey Arnold! in which Arnold tries to do everything on “The List,” a prospectus of the best things a kid can do on a Saturday: ride a bike down a steep hill, eat sugary cereal, watch cartoons, et cetera. But at every turn, something goes awry: the hill is being paved and his bike gets stuck, the milk is sour, the TV breaks. Arnold is depressed—he didn’t get one thing done—until his grandmother sings him a song reminding him to appreciate life. Bryson Tiller is still learning to do just that. On a sunny Saturday in Los Angeles, the reluctant pop star is trying to relax as he prepares to tour the world in support of his latest album, True to Self. His dream weekend is spent perched in his native Louisville, Kentucky, watching shows like the aforementioned Hey Arnold!, Doug, and Dragon Ball Z—a form of serenity that’s appealed to Tiller since he was young.

“I was an inside [kid],” says the 24-year-old. “Never went outside, never had a girlfriend, stayed to myself. Until eight or 10, I was just playing with action figures all the time. I used to create little stories [for them]. Then I fell in love with video games. When I got my first Xbox, I became a hard-core gamer.”

But Tiller started exercising his other talent—a honeyed voice with lyrical prowess—in high school, and when he turned 17, he released a mixtape, which promptly went nowhere. So he slogged at a moving company, then at UPS and Papa John’s. He applied for a third job at Kroger to supplement his income after the birth of his daughter, Harley, to no avail. But not getting that job turned out for the best, because Tiller decided that the realest way to provide for his daughter would be to step into the studio and make the music thing work. He posted a track called “Don’t” to Soundcloud in 2014, and a whirlwind ensued: Timbaland came across the song, then Drake courted Tiller for his OVO label, but Tiller turned him down for a contract at RCA, where he released Trapsoul, a record of bruised-ego rap-singing bolstered by the single “Exchange,” which landed Tiller a Grammy nomination. The record went platinum. True to Self, released this past May, debuted at No. 1 on the Billboard 200.

The new record, Tiller says, is about trying to keep his head amid all the new attention. He doesn’t like the fame, and has to make an effort to ensure his success doesn’t change him. “There are contracts that say I have to be an artist,” he says. “I guess [you] can say that I put that on myself. My team pushes me, and says, ‘You could be the biggest artist there is.’ I think I could, too, if I worked hard, but I don’t even want to be a superstar. I just like making music. It’s therapeutic for me. I would rather see somebody else singing my songs in the spotlight. Some people think I say that to sound cool, but that’s not the case at all. Trust me, I would love to be in the background and still have the same type of money—be able to take care of myself and my family, and [have] nobody know who I am.”

It’s like in Spider-Man: Homecoming, which Tiller recently watched, when Peter Parker’s friend Ned asks him, “What is it like being famous when nobody knows it’s you?” Tiller wants to be Spider-Man. “When he puts on the costume, he’s Spider-Man, and he does all this dope shit. Then he takes it off, and nobody knows who he is, and he hears people talking about, like, ‘Did you see Spider-Man? He did this, and that,’” says Tiller. “That’s how I want to be.”

It might be too late for anonymity, though, between the success of True to Self and Tiller’s gold-certified collaboration with DJ Khaled and Rihanna, “Wild Thoughts,” which was a top contender for 2017’s song of the summer. At what is probably his most visible moment, he’s trying to come out of his shell. “I’m trying not to be an introvert, because I think sometimes it comes off as if I’m a weirdo,” says Tiller, who finds a bit more freedom writing songs under his nom de guerre, Pen Griffey. “I don’t want to scare people away.” He’s learning to be more engaging at his live shows, and he wants to provide creative direction for a TV show and action figure. And he’s even starting to enjoy the fruits of his labor a bit more, as indicated by his ride of choice. “When I bought a sports car, I drove it [to visit my youth pastor],” he recalls. “He was like, ‘You know what I like? It’s a small car, but your head still fits inside.’”

In the same breath, the introverted gamer in Tiller persists. His greatest gaming achievement to date is beating Teenage Mutant Ninja Turtles: Turtles in Time on Super Nintendo, and he dreams of developing games, but will probably do so under a pseudonym to avoid being given special treatment. He even plays on Xbox Live with his fans, and shares a love of gaming with his last tourmate, The Weeknd.

“Honestly, that’s how we bonded,” Tiller says of playing The Legend of Zelda: Breath of the Wild on Nintendo Switch while on The Weeknd’s Starboy Tour—and how he met his match within the niche of reclusive pop stars with a penchant for gaming. “Weeknd was like, ‘How far are you?’ I was like, ‘I’m pretty far,’” Tiller says. “But he showed me his, and he was way further.”