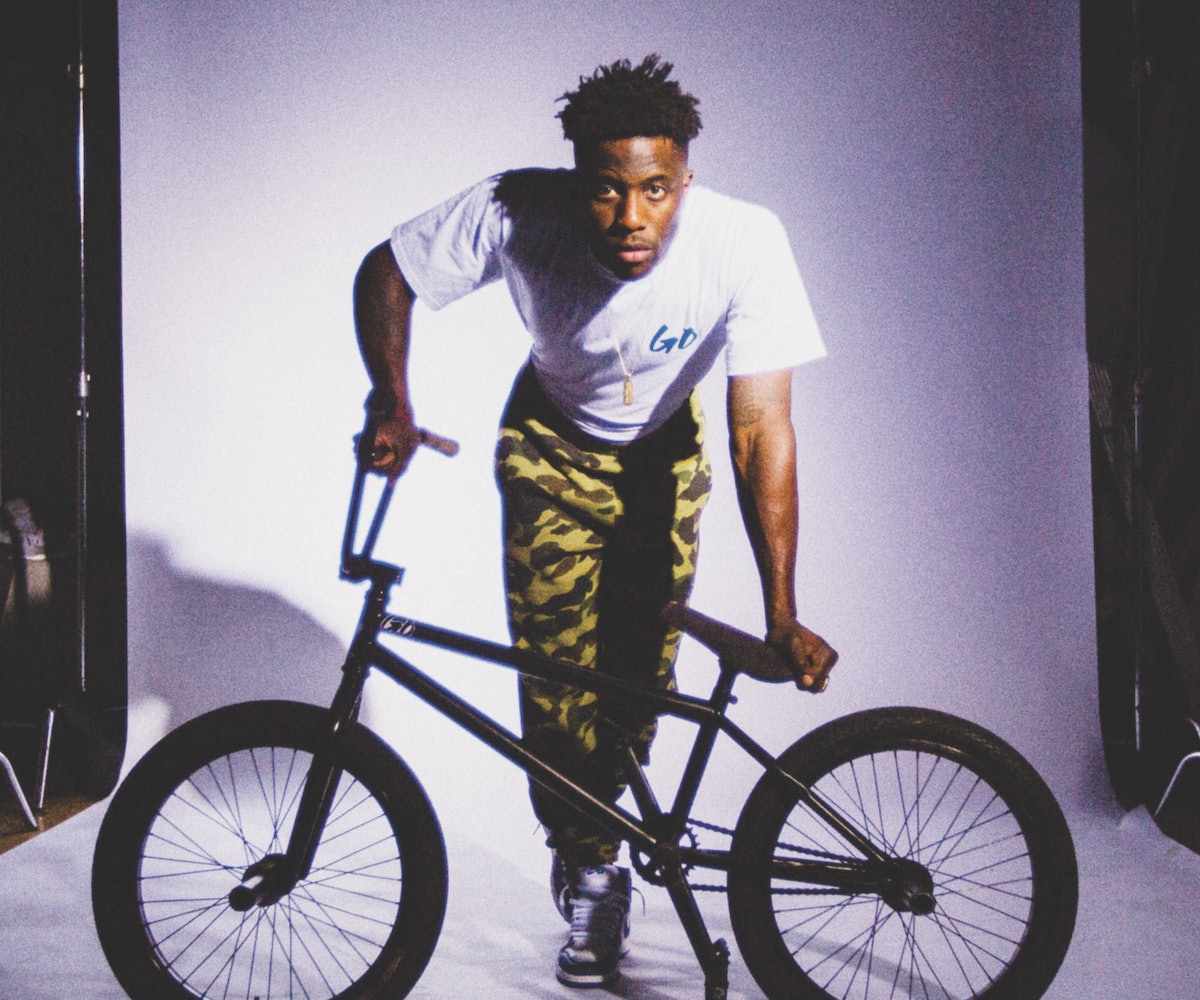 The pathway to success is replete with hills, winding roads, and sharp turns. For most, these obstacles can seem insurmountable, but for Nigel Sylvester, learning to navigate them has been the key to his accomplishments—literally. He’s one of the most innovative figures in the BMX world, and as such, he’s shaken hands with cultural icons, been admired by fashion designers and style curators, and been the face of campaigns for multimillion-dollar brands.

“I was always into bicycles as a kid because it was the easiest way for us to get around in the hood,” the 29-year-old says. We’re sitting on the top floor of the Ludlow House in New York’s Lower East Side as Sylvester recalls his formative years in Jamaica, Queens. “My friends and I would battle to see who could pop wheelies down the street, so the natural progression from having a bike and doing tricks to getting acceptance from the OGs in my neighborhood—dude, that was such an addictive feeling.” He soon earned that same acceptance from the greats of his sport: The late Dave Mirra appeared alongside the young biker in the Flipside BMX DVD in 2006, and offered him his first professional deal soon after. “He gave me my first shot at riding on a professional level, and wanted me to ride in my own way,” says Sylvester. “He was a hero of mine, so to have someone of his caliber giving me that co-sign, that’s something you only see in a storybook.”

While most of Sylvester’s peers have taken the usual route to attracting such acclaim—going professional, riding with teams, winning competitions, and earning sponsorships—he carved out a unique method of reaching the top. “I turned pro when I was 18, but I didn’t have to compete on the contest circuits to be considered a pro. So instead, I’d appear in videos, doing tricks on a professional level,” he says. Sylvester soon had a cult following for the videos of his adrenaline-inducing stunts performed right in his neighborhood. That allowed him to expand his network, and collaborate with content producer Levi Maestro for his “Maestro Knows” video series. “Kids like Maestro and I had the lay of the land of the internet, and defined what the word content even was,” he says, noting that his foresight has served him well. “It made companies rush to sign me before others would—similar to how rappers would put out mixtapes before the major labels would come calling.”

And did those brands ever come calling: His roster of sponsors includes Nike, Beats by Dre, New Era, GoPro, Animal Bikes, and Ethika, along with G-Shock, which allowed the biker to flex his design skills on limited-edition pieces, and Brooklyn Machine Works, a bicycle company partly owned by none other than Pharrell. Having such support has further bolstered his content creation, especially for his “Go!” video series, which gives viewers a firsthand look at his tricks and travels. “People used to ask how it felt to ride a bike, so I combined that with my desire to travel the world,” he explains. “From New York to L.A. to Tokyo, and now Dubai, the series has allowed me to portray what my life is like at this moment through my lens. And so far, so good.”

Despite these numerous accolades, it took time for Sylvester to develop a support system among those closest to him. “My parents are from Grenada so to them, going to school and having a nine-to-five is the most important thing,” he says. “It wasn’t until after a couple years of me being a pro—once I was in ads, on billboards, and on TV—that my parents realized I was doing something real with my life.” One accomplishment in particular proved Sylvester’s success to his family: being named in Forbes’s “30 Under 30” list, and becoming the first BMX rider to receive that honor. “To be doing an unconventional sport in an unconventional way, I’m an anomaly, bro,” he proudly claims. “I’m a black kid from Jamaica, Queens, and it shows anyone who looks at me as inspiration that they can do it, too.”

Despite this success being Sylvester’s primary source of pride, it ultimately became one of the biggest hurdles of his career. “BMX and the people in it can be so insular at times,” he says. “I’m probably one of the most hated bike riders in the game right now, because with a lot of things I’ve done in my career, people look at that as selling out and me being too corporate. But I’m also one of the most loved riders just because of what I’m bringing to the sport. So, to the purists who think I sold out: Fuck that and fuck you, because a lot of people could never imagine what I’ve went through.” He pauses, mentally plotting out his words like he’s mapping out a succession of tricks to perform. “I’ve faced racism my entire life. I’ve traveled the world and dealt with it on many different levels. I had an unmarked cop car follow me the other day when my friends and I were riding on the Upper West Side, just visiting some homies. Then you have people who talk crazy in internet comments, calling me the N-word. It’s nuts.”

If Sylvester can help it, though, there will soon be more bikers who look like him making impressions upon the BMX world. “I try to impact other black kids the best way I can,” he says. “I remember looking up to other riders when I was a kid, and it always reminds me to keep on pressing and keeping on pushing. There’s an entire wave of people coming behind me, so if I can break down these barriers for them, the message I’m trying to get across will be spread even further.”