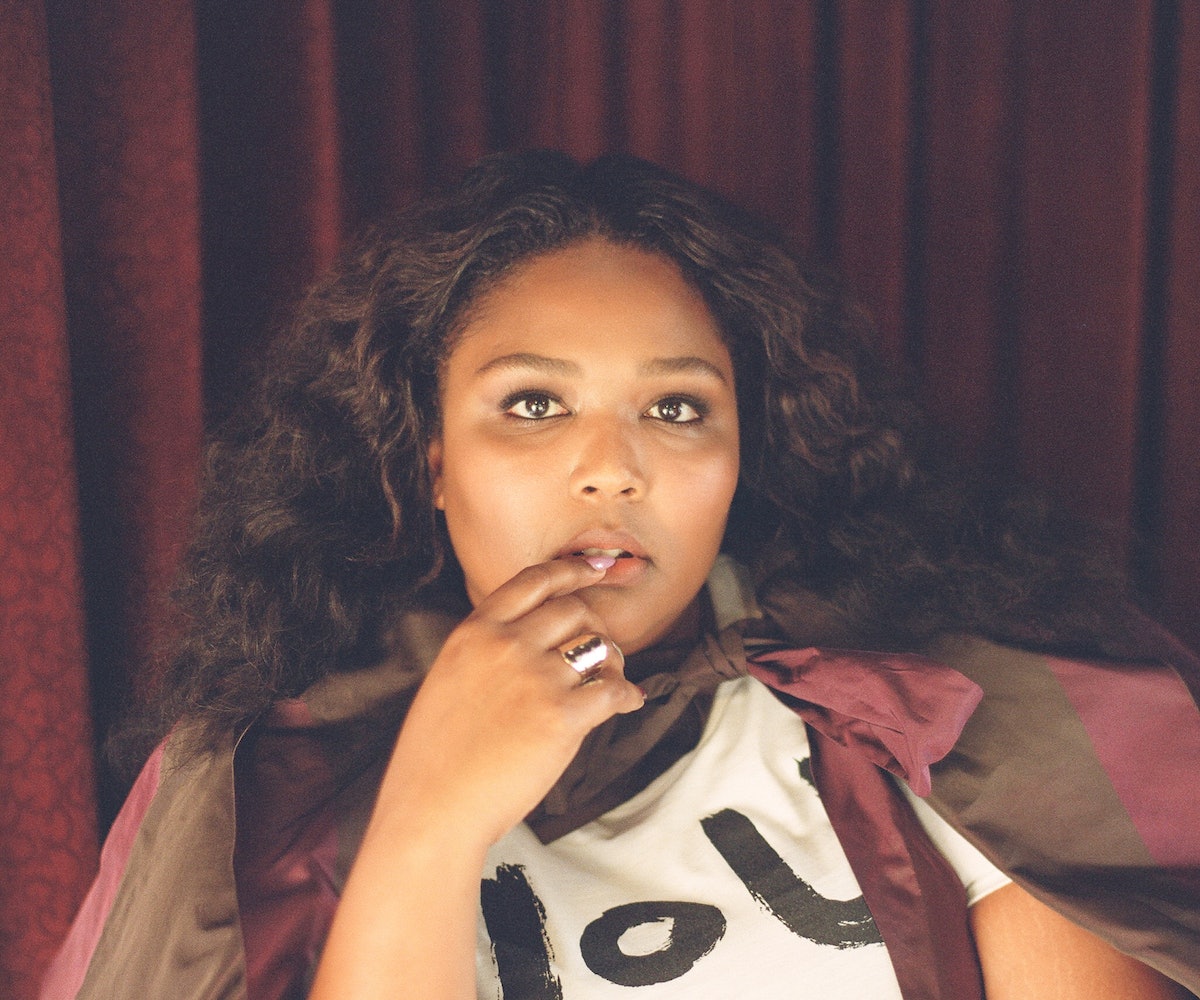 On a bright afternoon last October, a brief bout of pandemonium swept over Los Angeles International Airport. LL Cool J was boarding a flight to Austin, and his lady fans were flocking to take selfies with him. In line at the gate stood Lizzo, who would be the opening act for the iconic rapper’s performance at Austin City Limits Music Festival the next day and, as such, was impervious to the fandom infecting the air. Or so it seemed.

“Oh, I spoke to him on the plane. Ha!” says Lizzo with an explosive laugh, seated outside a coffee shop on Beverly Hills’ Wilshire Boulevard. “But I was like, ‘Damn, LL.’ I thought he’d be flying private.” Noting that he hosted the Grammys for five years straight, she continues: “So he goes”—she drops her register, adopting her best LL impersonation—“‘I’ll see you next year.’”

Despite passing off the torch to James Corden, LL may have been on to something with his prophetic proclamation. Lizzo isn’t Grammy-nominated yet, but she’s surely got the story of a star. Growing up broke, she lived a nomadic life in Detroit, Houston, and Minneapolis. “I’ve never moved somewhere like normal people—it was always, ‘Evacuate!’” she recalls. She’s still surprised to find herself living in L.A.: Born Melissa Jefferson and raised in a religious household, she didn’t have access to non-religious music or TV until she was 10. Even now, she feels less assimilated into and more so observant of pop culture. (“I use it like a science,” she says.)

An avid fan of both R&B and alt-rock, Lizzo’s favorite song in her youth was Radiohead’s “Subterranean Homesick Alien,” and the track still resonates with her. “I listened to the lyrics and was like, ‘Thom Yorke, you feel me!’” she says. “It’s how I feel when I’m explaining my struggle. Now, when I think about ‘Trump’s America,’ I wish the aliens would just swoop down in a country lane and take me away. Ha!” By seventh grade, Lizzo had a rap crew, The Cornrow Clique, and rhymed under the moniker “Lisso.” She’d call in to Houston radio stations and freestyle, but her aspirations remained more traditional, as she studied classical flute. “I had two lives,” she explains. “I was Lizzo, the rapper, and I was Melissa, the girl who was going to Paris to be in a wind chamber. I chose the rap life, but my flute represents that band geek in me.”

That decision spurred from a gut instinct after she received her classical flute degree at the University of Houston, but accepting it didn’t come easily. Quitting classical music led to a summer overcome with depression, during which Lizzo “moved to the mountains” in Denver and inadvertently spent three months in silence. “I think [my depression] came from a place of feeling hopeless, you know?” she says. “I’d just dropped my life’s work.” To overcome her grief, she gave herself a new challenge. “I decided I wanted to be a singer, but I never really sang before.” At the time, she only sang alone at night while jogging to Beyoncé’s B’Day album. “I sounded so bad,” she recalls. “Bad” is how she describes much of her early twenties: She was poor and played with “bad” rock bands, and at her lowest ebb auditioned for American Idol with Beyoncé’s “Listen,” sung “badly.” Despite her setbacks and having to prove herself to her mother (her father passed away when she was 21), she always believed she’d find a way. “I’m just not good at customer service,” she jokes.

Today, Lizzo is a beacon of empowerment. When I tell her I’ve quit caffeine she showers me with encouragement: “Kudos! You’ve given up drugs!” Her independently released albums Lizzobangers (2013) and Big Grrrl Small World (2015) possess that same enthusiasm, with a thrilling sound that traverses hip-hop, pop, and soul, while her rambunctious persona challenges preconceptions about femininity and volume. It’s difficult to pigeonhole Lizzo—although Rolling Stone tried, by including her most recent project, last year’s Coconut Oil EP, in its Best Pop Albums of 2016 list. “First off, it wasn’t an album,” she says, “Second, it’s not pop. But, okay, I’ll take it!”

Coconut Oil is an introspective and less overtly political project compared to Lizzo’s first two albums. Lizzobangers is her “angry” record (“I was dealing with all the things Black Lives Matters activists deal with, but by myself,” she explains) and Big Grrrl is about love (“love for a woman who lost her son in a senseless murder, love for a woman who doesn’t know her stretch marks are beautiful”), but Coconut Oil is about self-care—it’s like a face mask for the soul. “Women are born to receive signals from the media like little land mines that get planted on us about the way we look and sound,” she explains of the project’s inspiration.

“When you grow up, things set the land mines off and send you down a spiral to Macy’s or Weight Watchers or an eating disorder. The littlest things set me off. If I look at a Kardashian for too long, I’m like, ‘Argh, I gotta go straighten my hair and put some eyebrows on!’”

Naturally, themes of self-love in Lizzo’s work stem from her own journey to accept her figure, and having to pander to the media’s focus on her “body positive” messages and the sheer fact of her weight. She spent the Big Grrrl years trying to resolve her relationships with family and friends, but in doing so, compromised her focus on her relationship with herself. “I said, ‘This is it, I gotta love my body.’” And the more she accepted herself, the more she wanted to nurture. “I’ve been killing it: coconut oil, water, movement, sleep,” she says.

Still, incorporating some level of political commentary into her music is unavoidable: According to Lizzo, simply being a black woman is inherently political. “I have no choice,” she says. “My mere existence is activism. I can sing ‘Worship’ and there’s no lyric that says, ‘I’m a black woman! Feminism and racism exist!’ but people are like, ‘Woo! Political anthem of the year, girl!’ If Ariana Grande sang it, they would think it’s a love song.” She explains the song’s meaning: “I don’t want a man to worship me. I want society to see a big black woman as the queen that she is.”

While Lizzo recognizes the need for anger in art, her growing focus on her self-worth has given her career greater value. At the kickoff of her Coconut Oil Tour (which coincided with Inauguration Day), she referred to herself as her audience’s “self-help guidance counselor,” and the sold-out crowd joined her in raising a fist to honor the Black Lives Matter movement. But in “Trump’s America” she intends to empower people with more than just music. Though part of her reason for moving to L.A. was to be closer to Ricky Reed, who’s working on her upcoming third album, the new environment has sparked a new aspiration: Since last August, she has hosted MTV’s Wonderland, and hopes to have her own show some day. (“They know I been takin’ notes!” she says.) She’s started screenwriting as well. While she used to write fantasy fiction, now that she’s living her own fantasy, her inspiration has shifted. “I don’t write fantasy no more. I write reality,” she says. “I want people to know how my old noggin works. My ideas ain’t just for me, they’re for other people.”