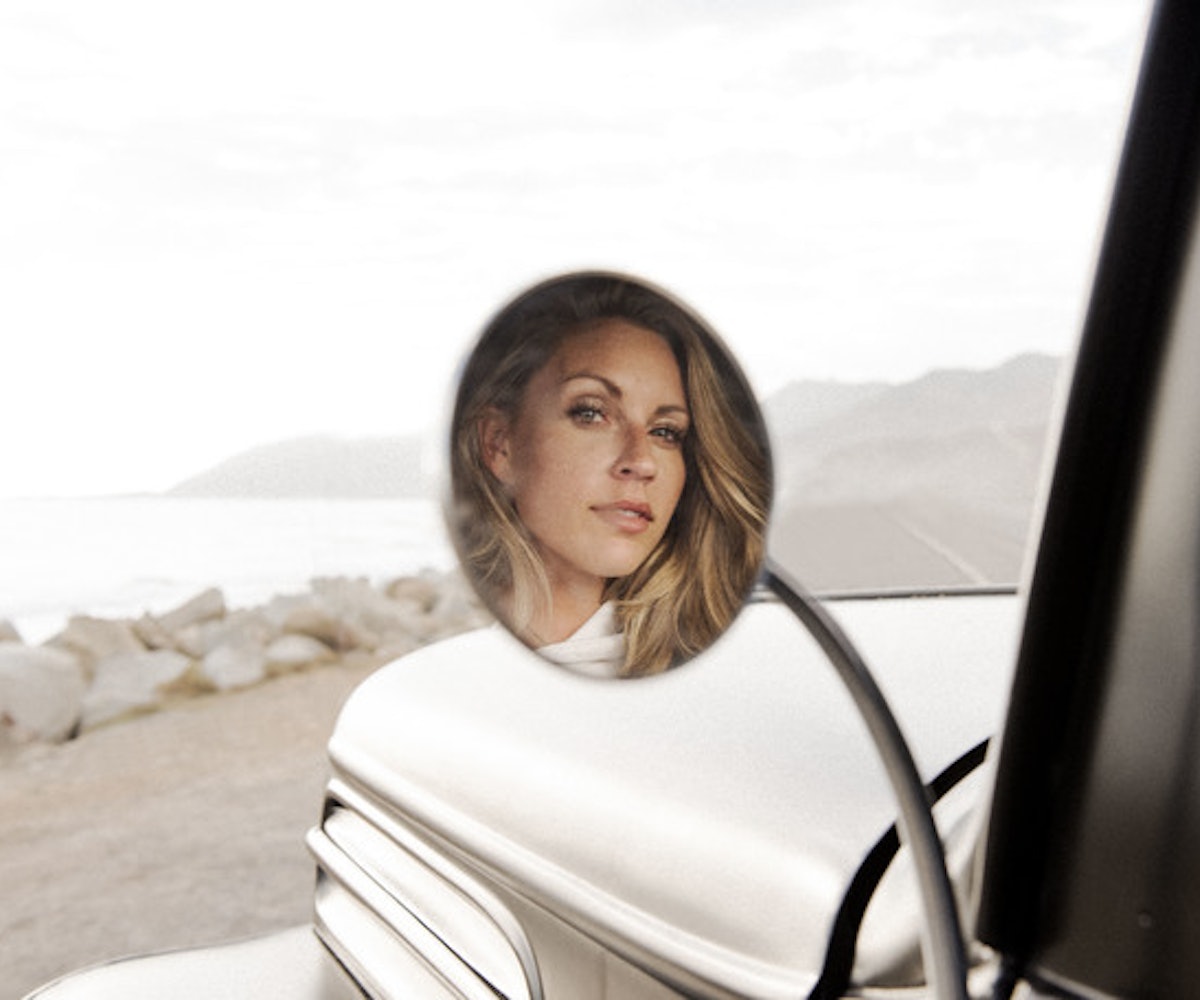 “With old cars, you have to get to know them,” Molly Esterline tells me as she guides her 1947 Ford F1 up a hill. The matte black pickup, dubbed Rebel Rose, lets out a deep rumble as it switches gears. “Sometimes she’s a little testy, other times she’s happy. I know it sounds ridiculous, but I literally feel like [this truck is] a person.” On this hot Monday afternoon, we wind through the back roads of Agoura Hills, California, near where Esterline and her sister grew up surrounded by cars.

“My dad has seven hot rods,” Esterline says. “I really wanted someone in the family to pass one down to me, but they’re all still truckin’.” So this year, after a string of life changes, Esterline found a vintage ride of her own—a big, loud, and curvy antique Ford dating all the way back to the Truman era that feels both tough and rustic. Though it’s only been a few months since Esterline acquired Rebel Rose, the two are already bonded for life. “She’s my War Rig,” Esterline gushes, referencing Charlize Theron’s massive 18-wheeler from Mad Max: Fury Road. She cranks open a small flap-like vent on the truck’s dash. “That’s the air conditioner! It’s the same as in the movie when the sand comes in and they open up the headers!” she says, and smiles proudly as we soldier on.

How did you find your truck?I was going through a really hard time and I started looking mostly just to get my mind off of things. I found myself spending hours on end looking at these cars online. Originally I wanted a 1930 Model A—that’s my dream car—but then I came across her. It was one of those things where you’re looking and thinking everything is great, but then when you find “the one” it’s like, “Oh my god, this is it.” It all happened pretty quickly after that. I bought her from a private dealer in Illinois, and there were a lot of steps before she was mine. It ended up taking about a month to get her out here. I’ve never been so stressed out about something in my life.

What’s the story behind the name Rebel Rose? I’ve lived by the book my whole life, and when I got to my later twenties I decided I wanted to kind of rebel a little bit—not be so consumed by work, work, work, and saving, saving, saving. I splurged on her, so she’s my Rebel Rose. I think in your late twenties and early thirties you go through this “What am I?” phase. I felt so lost, but I knew that this was something that I wanted to do. When I got her it felt like, “Now I know who I am.” She works on me just as much as I work on her.

As we cruise the 101 Freeway, the view turns from suburban to rural. Out the window, there are rolling hills covered with dry brush and horses basking in the midday sun.

Do you do all of your own repairs? My dad is in Arizona now, but growing up I would always be in the garage with him. He had a 1969 Ford F250 that he would take apart and put back together, so I know the lingo and the terms, but you also don’t really pay attention until it’s yours. I’m really lucky that my best friend’s dad is also a huge Ford fanatic, so for the past few months he’s been helping me fix the brakes and change the oil, and teaching me the ins and outs of it. I want to learn everything about it.

Do you have a stereo?I don’t. I have one of those Beatbox things and we keep joking around about getting a hook for it. I want to put a sound system in it where the speakers are behind [the seats] and it’s all through the Bluetooth, because I don’t want to mess with the dash or anything like that.

Do you have any favorite driving music? Old-school blues is my favorite these days. I love raspy blues.

We pull over in a picturesque neighborhood and park below an oak tree. Perched on the tailgate, Esterline tells me about driving to the beach with her sister and their girlfriends, and spending long nights hanging out in the bed of her truck.

What else do you want to do to her? She just got repainted and I love the matte black, but I want to pinstripe it a little bit. The Ford symbols are really beautiful on this truck, so I kinda want to make them an accent. I want to lower it—not to the ground, but just a little bit so it’s not so “farm truck.” But I also just love her the way she is.

NEXT UP
Entertainment
Lizzo Announced UK & European Dates For The Special Tour
Beauty
Tumblr’s Coquette Aesthetic Is Taking Over Beauty — How To Get The Look
Entertainment
Relive ‘00s New York With Yeah Yeah Yeahs, The Strokes In ‘Meet Me In The Bathroom’ Trailer
Life
Beloved Video Game Oregon Trail To Become A Musical Film