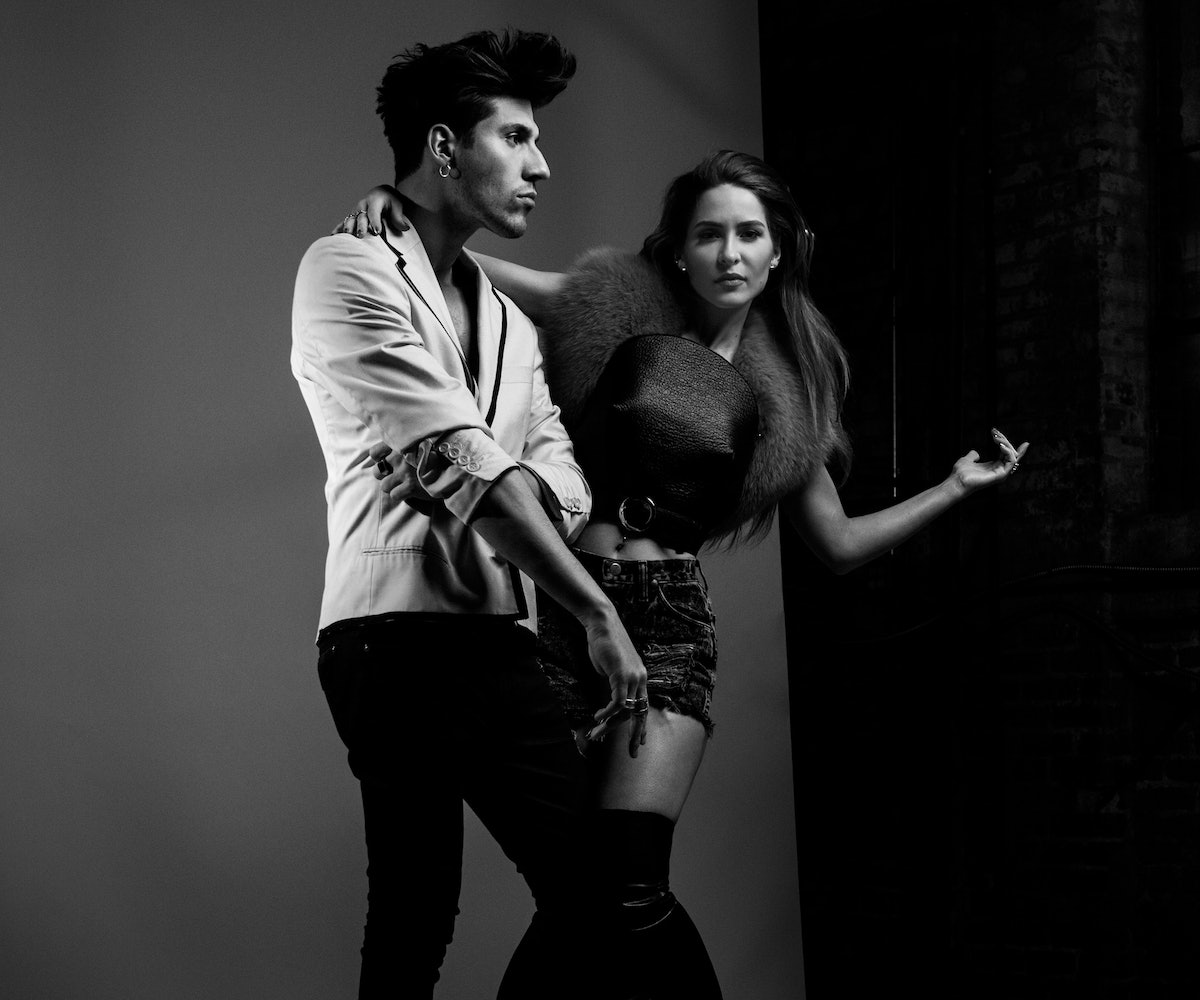 Push-ups, pilates, and no cupcakes—it’s not an easy regimen, but for alt-pop band Powers, it’s how they’re preparing to take their upcoming debut album, Alpha, across the country on this spring’s NYLON Music Tour. For two years, Mike Del Rio and Crista Ru have been brewing a funky, energetic sound, most recently heard on “Dance,” the lead single from their first full-length record. The track epitomizes the duo’s ability to meld up-tempo beats with powerful messages: “It’s a very politically driven song, and we try to get our view out in a poetic manner,” says Ru, “but it’s not so much like a classic punk-rock song where they’re just ranting about how angry they are.” Here, we discuss their origins, Alpha, and the importance of using your voice—or tweets—for good.

Tell me about your new record.

How did you find making the album to be different from your previous work?

Del Rio: When we made our earlier music, we hadn’t toured. But last year, we tried out a lot of the songs on the road before they were even fully recorded. “Dance” almost didn’t even make the record until we played it at a festival. I think a lot of the songs on Alpha feel much bigger and more colorful. It’s a much more epic sound because we toured and got out of our comfort zone.

Your chemistry seems so natural. How would you describe your dynamic?

Crista Ru: Michael definitely takes on a lot of the weight in the band as a producer. We write together and come up with all these crazy ideas, but he’s the one who’s putting all the little details in.

Del Rio: Crista’s the funk queen. I can get so into what I’m doing, and Crista can just roll in and be like, “This sucks.”

Ru: Michael is very technical and can really focus. I’m kind of—

What were your introductions to music?

Ru: Watching Yellow Submarine as a child blew my mind. And I had an uncle who would do drag shows in the city. We’d go on Sundays for brunch—that was my first experience with live music. Although they weren’t actually singing, that energy and how free it made people feel made me want to learn how to perform.

Del Rio: We always had music playing in the house. Every New Year’s Eve, the family would get together around the karaoke machine and sing Frank Sinatra till six in the morning. I got hooked on that feeling of entertaining people. My parents got a piano for the house when I was around eight, and the second I learned what a note was, I started writing.

I genuinely appreciate how funny you guys are on Twitter, but you’re also not shy about voicing your opinions on politics.

Ru: As artists, it’s imperative that we speak up about what we see in the world, and to try to do something about it. Not a lot of artists these days are doing that, and it breaks my heart. Now, more than ever, we need to talk about those things, because it can help shape the future in a better way.

Del Rio: In the age of the internet you’re able to escape reality or dive deeper into it, and I think some people choose to escape it. But mobilizing voices can actually move mountains. I feel like music is going to play more of an important role in standing up for common sense and common good.