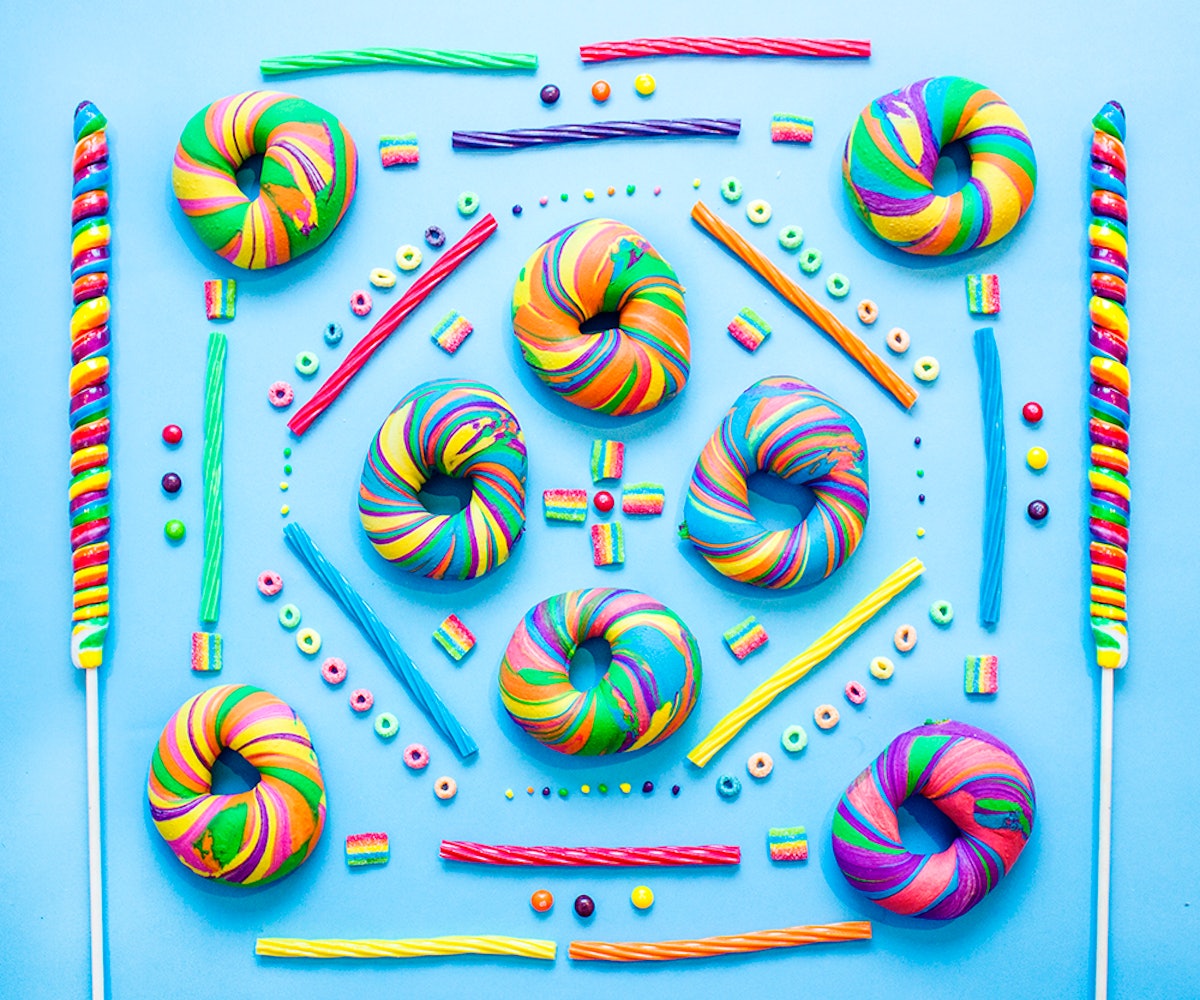 Photographed by Kelly Shami. Special thanks to The Bagel Store in Williamsburg, Brooklyn.
fb
tw

Science says that what we perceive as taste is actually highly dependent upon our sense of smell. But apparently biology can take a back seat to my superficiality, because I’ve always been what I like to call a “visual eater.”

Sometimes this means I find myself consuming a cloying cotton-candy-flavored SpongeBob SquarePants popsicle on a summer day, or perhaps sinking my teeth into those dense, waxy mellowcreme pumpkins come fall, because—despite my taste buds’ better judgment—I think, “Eat that shit. It’s fucking adorable.” This has been happening for as long as I can remember. I won’t get into the time in the mid-’90s when I took a bite of a pretty, glittery “Berry Heavenly” Lip Smacker, as it probably speaks to some deeper issues. I do, however, distinctly recall my eight-year-old self downing a whole box of child-repelling Good & Plenty licorice in one sitting solely for the candy’s pleasing pink-and-white form.

But above all, having an optically inclined palate also means I have an almost magnetic attraction to eats with vibrant swirls of psychedelic colors only found naturally in unicorn excrement. That’s right, I’m a grown woman and I’m really into rainbow food. The thing is, I’m otherwise kind of an obnoxious #cleaneater—like, lean proteins, leafy greens, complex carbs, the whole nine yards. But still, technicolor grub, artificially hued as it may be, has always had a special place in my heart.

Perhaps it’s because chewing on a bright ROYGBIV delicacy feels like riding off into a red 40 sunset through a field of royal blue 2 flowers on the back of Rainbow Brite’s arrogant steed (seriously, re-watch that show—the horse is kind of a self-important asshole). It could be because in my early life I was led to believe there would be some kind of monetary compensation at the end of the whole deal—I might be a subconscious sucker for some quick pot-of-gold cash. Or maybe my mother had Bob Marley’s “Rainbow Country” playing on repeat when I was in the womb (admittedly a reaching theory, but you never know).

When it comes down to it, though, I think I love rainbow food because to me, eating is a cinematic experience. Food can really define a moment’s mise-en-scène, eliciting very visceral memories that set a mood. And to be frank—or, better yet, Lisa Frank—“rainbow” might be the one category of comestibles that calls for good times only. It’s strictly the stuff of celebrations and fun, of youth and play. Even if it’s just the work of food coloring, I do swear it offers an enhanced flavor. Because rainbow, simply put, tastes like happiness, and I’m always hungry for that.

NEXT UP
Life
A Studio Ghibli-Inspired Cookbook Is Coming To A Kitchen Near You
Life
On The List (With Melissa Rich): The Highs & Lows Of Solo Partying
Life
Alison Roman Is Getting Her Own Cooking Show
Life
The White Lotus Season 2 Trailer: Italian Sleaze, Vespas, & Scandal