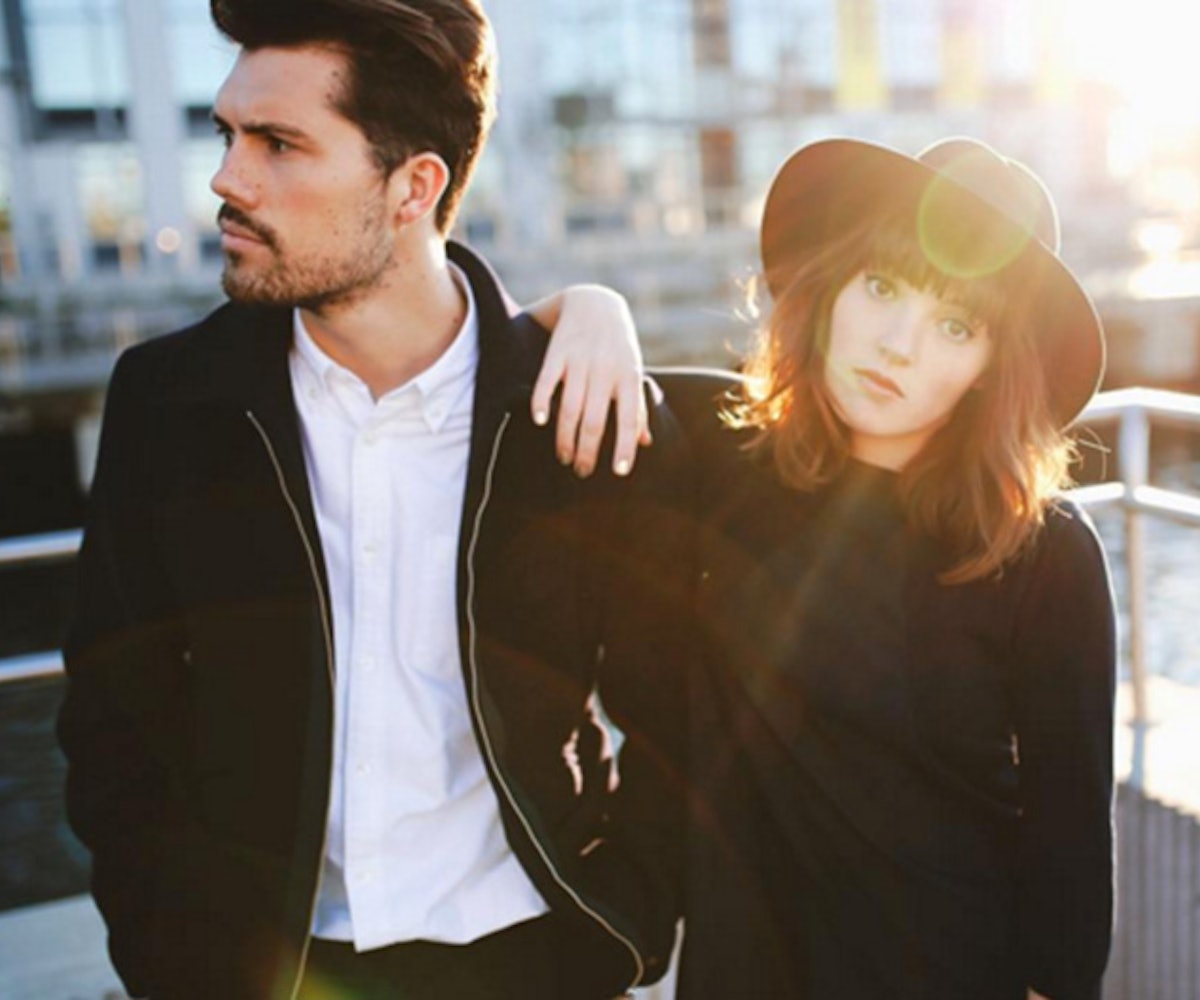 In the age of YouTube, Oh Wonder is a bit of a, well, wonder. It's a band that’s come to prominence through the power of SoundCloud and the unadulterated urge to get their songs out there. For a year, Josephine Vander Gucht and Anthony West released one song from their now debut, self-titled EP on the music-streaming site and culled over 13.5 million plays. This all happened before they even played on stage together. Talk about harnessing the Internet.

This all happened, though, because of the genuinely blissful air Oh Wonder’s music carries. There aren’t any distractions layered into its easy-like-Sunday-morning vibes. The debut LP is a delicate collection of tracks that seek nothing more than to remind the listener to make time to connect. After all, Anthony and Josephine’s connection is an extraordinary one—one that defines what it means to be “in tune.” Together, they create music that unites, comforts, and won’t let you down.

Ahead, we speak to Oh Wonder about emojis, the album, SoundCloud, and a little game of name-switching.

The whole lead-up to your debut album was really exciting. I’m curious to know why you chose SoundCloud over, say, Spotify or iTunes?

ANTHONY: I guess, for us, SoundCloud is really freeing because you can put a track up, take it down—you can do anything; you can have your whole release schedule on there. Spotify is more geared toward signed acts and things like putting proper release schedules together, right?

JOSEPHINE: Right. It’s more about the official plan with Spotify, and we never approached this project with an "official plan."

JOSEPHINE: SoundCloud, for us, was just the easiest way of being creative, putting up a song, and seeing if people liked it.

ANTHONY: It’s a great way of discovering music, as well. I think a lot of people just stumbled upon us because of the way people share music on it.

JOSEPHINE: And we weren’t even interested in selling [the music], were we? Which sounds really silly, but...

ANTHONY: Yeah, we didn’t mind not making money off it.

JOSEPHINE: We just wanted to put it out.

So, how did this project even come about then?

JOSEPHINE: It was just a love for writing. It was really a side project at first, wasn’t it?

ANTHONY: We had both been working together for about three years. I was Josephine’s producer and since then, we started writing together and realized that we actually write better together. I don’t think we did, initially.

JOSEPHINE: We basically had written a song we really liked and wanted an outlet to release it. That was kind of how Oh Wonder was formed. We didn’t have anywhere to put “Body Gold,” so we made a SoundCloud page, put it up anonymously, and it was out there. I think it’s such a shame when people make amazing art and don’t share it.

ANTHONY: We kind of eased it in, I guess. We started out anonymous! Our friends didn’t know about the project for three or four months.

What would you say has been the oddest or most memorable thing a fan has done for you?

JOSEPHINE: We had a great one at the Troubadour in L.A. We’re very local about our love of food—specifically burgers—and two lovely twins bought us a gift card for In-N-Out. It was perfect.

ANTHONY: There was a guy at The Echo, at our second L.A. show, who said he was thinking about giving up carpentry because he listened to our album and was really pumped to do something he loved.

JOSEPHINE: I started crying. It made me realize we’re helping people—which is the goal, isn’t it? To be a human that helps another human? We’re just doing it through music.

Was there ever a show, some artist, or song that made you realize that music is what you wanted to do?

ANTHONY: For me, it would be Ben Gibbard from Death Cab for Cutie. He’s one of my favorite songwriters. He’s always been in it for the art and not the other side of it—the fame and press. He writes great songs and has been in a great band for years. He’s got longevity, as well, which is our main goal.

JOSEPHINE: He’s a perfect example, because Death Cab is a band that has progressed so much from its first album to its latest album.

How in-tune would you say you are with each other?

In-tune enough to answer a few questions as the other?

JOSEPHINE: Yeah, we can totally do that.

Good for you. Favorite emoji?

JOSEPHINE: Ant’s is the fist pump.

ANTHONY: Yeah, I love the fist pump. And yours would be…

ANTHONY: Yeah. You don’t get to use that a lot in England.

What about guilty pleasure?

ANTHONY: Yeah. It’s not really guilty. What would be yours?

JOSEPHINE: My guilty pleasure is probably watching Netflix in my own bed.

ANTHONY: And Jason Derulo is a pretty guilty pleasure.

JOSEPHINE: Yeah, I love Jason Derulo. And watching Netflix in bed late at night with a bowl of cereal. I love eating cereal in the evening.

JOSEPHINE: Um, yours recently would be “Make it Holy” by The Staves.

ANTHONY: And yours would be, oh...

How would you say London has inspired your work?

ANTHONY: A lot of struggle, but a lot of success.

JOSEPHINE: This album celebrates those extremes and tries to reiterate the importance of looking after each other and building a community.

What is the best piece of advice you’ve been given that drives your work?

JOSEPHINE: So many things.

ANTHONY: One would be to D.I.Y. as much as you can. My uncle is a musician and a producer, and he inspired me when I was a kid. He did everything himself. I think it’s really good to not have to rely on people to get what you care about done and want to achieve out there. I think if you have to go through too many people to make your art than it’s—

ANTHONY: It’s filtered and it’s not actually you at the end of the day, it’s somebody else’s interpretation of it. So D.I.Y. for sure. Would that be yours? What do you got?

JOSEPHINE: Never give up. Somebody once told me it’s going to be really difficult if you want to be a musician, because everyone wants to be a musician. Persevere. I think that applies to anything. Like, just have faith in yourself and persevere, and you’ll probably get there. Keep going.