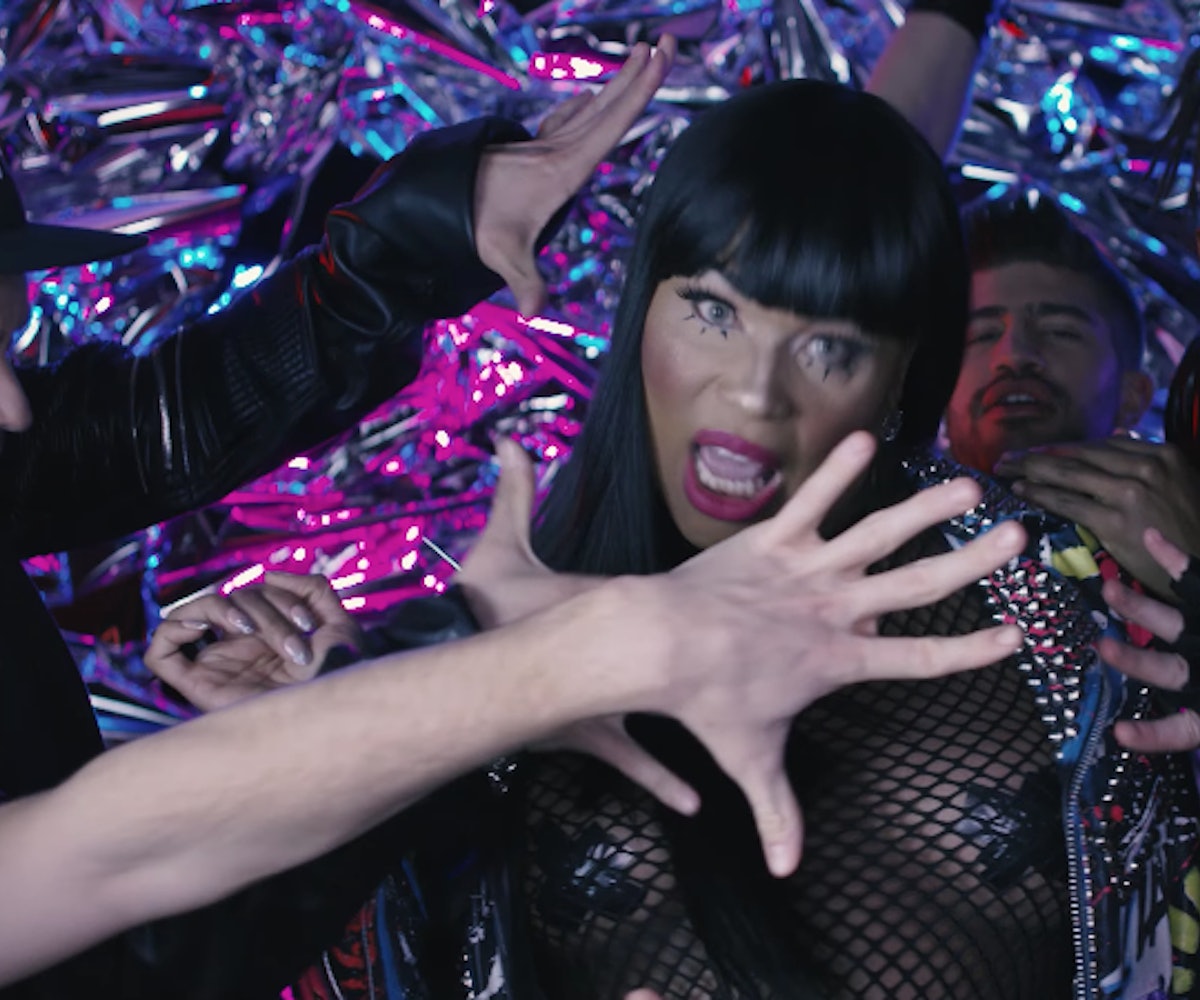 It's no secret that Peppermint is probably one of the sweetest queens to ever grace the RuPaul's Drag Race stage. So, obviously, we're delighted to premiere the lovable lady's brand-new music video for her silly-sexy track "Black Pepper." And girl, you better be prepared for a five-alarm fire, because Pep is setting this house ablaze.

Taken from her 2017 EP of the same name, "Black Pepper" is exactly how'd you imagine it: mellow enough for a weekday night in, but sharp enough to make you feel a little bit bad. An undeniably fun song (with some hilariously raunchy visuals to match), be sure to watch the video before reading our Q&A with her about everything from her deep-seated love of '90s hip-hop to television's trans revolution and her new Broadway gig.

Tell me a little bit about writing "Black Pepper." What were some of the themes that you wanted to explore?

I had a deep story, but, to be honest, I really just wanted a track that was a bump or a bop. I worked in a restaurant a long time ago, and one of the waiters there used to joke about me being Black Pepper, which I thought was cute.

I think people are so used to me being just sweet and just nice, so I wanted to do something that had a little bite, a little spice to it. I just wanted a video that was kind of sexy and really ridiculous and super-stupid... Just like the title [of the album the song is from], “Black Pepper” is spicy and a little bit darker.

I also wanted to have some more real themes [addressed], so on some of the album, I talk about the LGBTQ community. Other songs are just fun bops. I also have a couple of covers, a Queen cover and a George Michael cover because I wanted to pay homage to him.

Why choose to rap on this track?

Rapping is not new for me. I've been rapping for a while. I've been a platinum-selling rapper in my mind since I heard of Biggie Smalls and Lil' Kim.

When I record music, usually it's self-produced or co-produced by somebody, and it's an independent release. So until I'm on a major label, I'm going to do the music that I just love. Anybody that knows me, knows that I'm a hip-hop girl through and through. But I sing and I do hip-hop. You know? So, there's some rapping on the album. There's also some singing. I even do a little sign language, but that's obviously not on the album.

I've noticed a lot more queens are rapping now, including you and Aja, who just released In My Feelings. Why do you think that's the case? Do you think it's a sign of a broader pop cultural shift?

Hip-hop really connects everybody. I mean, all you have to do is look back to kind-of see some of that. In the early stages of hip-hop, it was viewed as an underground kind of music. And I think hip-hop really kind of took over the mainstream... and then [evolved into this] mainstream version of hip-hop.

It wasn’t long before all those kids in the suburbs knew all the words to NWA, and I think that’s because hip-hop has always been a form of music everyone can really get behind, because it’s associated with just being real.

The lyrics, a lot of times, are coming from a real place, and when you put that together with a beat or a jam that makes you tap your foot, you have a recipe for success. Rapping is a lot like poetry. Hip-hop requires you to speak more from your heart—then the rest will flow. That's my take on it.

If you're asking why more queens are rapping as opposed to singing, I think it's because singing is not necessarily as acceptable to everyone. For some reason, when you're singing, people's opinions get very strong. It doesn't appeal to everyone's ear—a drag queen singing. But with rapping, you can be comical, you can be from the heart, you can talk about social or political things. There’s a wider array of things that you can express through hip-hop music sometimes, and I think that's why. My first time rapping was on my first album, Hardcore Glamour, which came out in 2009. Back then, there were no drag queens—or at least not off Drag Race—rapping. I was the only one.

But I think music lives in every human. That's why we like music. We all are singers in the shower, but everyone is also a critic. I'm just saying that if every human had an album, every human wouldn't be a platinum-selling artist.

I also wanted to ask you a little bit about Broadway. How that's been going and why did you want to pursue on stage work?

The first time I moved to New York City in 1997, I came here to go to school, to become a Broadway performer. And that's when I committed to music. Even really before drag, I was singing, learning Broadway tunes during the day, and doing drag at nightclubs. So that was my life for a while. I auditioned for several things and didn't get them. I guess, my brand... they weren't ready for whatever I was serving up at the time. So, I'm very blessed to have gotten the call, to go in and audition for Head Over Heels. It was the first show that I auditioned for in years and years. So I was really nervous, but I got it.

There’s been a lot of conversation about transphobia in the LGBTQ+ community ever since RuPaul made those comments about “probably not” allowing transitioning queens on the show. However, it was a conversation that mainly happened online. Did you get a chance to talk to Ru in person at DragCon?

I didn't get a chance to talk to Ru at DragCon, unfortunately. We were swamped—and I’m sure Ru was, too. But I'm hoping Ru gets to come to see Head Over Heels when we open in June.

There’s been an influx of mainstream TV that’s finally addressing the trans experience, take Ryan Murphy’s Pose, for example. Why do you think we're just starting to talk about this right now though?

I think it has to do with visibility. The normalization of trans identities is synchronized between the queer community and [society] at large. No one's going to be having conversations about the inclusion of trans people, trans women into other spaces unless they start to see some of these examples [in the queer community]. It wasn't that long ago that we were marching for and fighting for marriage equality. And even though we were talking about LGBT equality, we're really talking about marriage between two men to two women.

Even just 10 years ago, we were only hearing LGBT—no QIA+. And we were really focused on marriage equality as the central and probably the biggest and—maybe to some people—the only political issue that really affected the queer community and the LBGT community. But most of those things were primarily adjacent to the experience of gay men and possibly gay women. But I think a lot of trans folks were there for it—we were there for the fight. I was there to march for marriage equality. I marched in heels across the Brooklyn Bridge for marriage equality, knowing I didn't have a partner and that when we were talking about same-sex marriage, it didn't really apply to me. But it was important to me, and I would have sacrificed as much as I could in order to see that happen. I think it took a lot of people in our community and our allies to achieve that. So we just spent so much time focused on that, in my opinion, trans rights and trans equality—and even women's rights and equality as applied to the queer community—kind of took a back seat for the time being. But, now that we've made such fabulous strides... I think it’s time. Though there still is work to do in the gay community. It's time now to include other voices in the LBTGQIA+ community. Trans folk visibility and inclusion is just the next step in that process.

NEXT UP
Entertainment
Harry Styles Is Performing At The 2023 Grammys
Entertainment
Meet Amy Allen, The Grammy-Nominated Songwriter Behind Pop's Most Honest Hits
Entertainment
Muni Long On The Grammys, Burnout & Not Worrying About The Labels
Entertainment
FLO Is Headlining Their First US Tour This Spring
Style + Culture, delivered straight to your inbox.