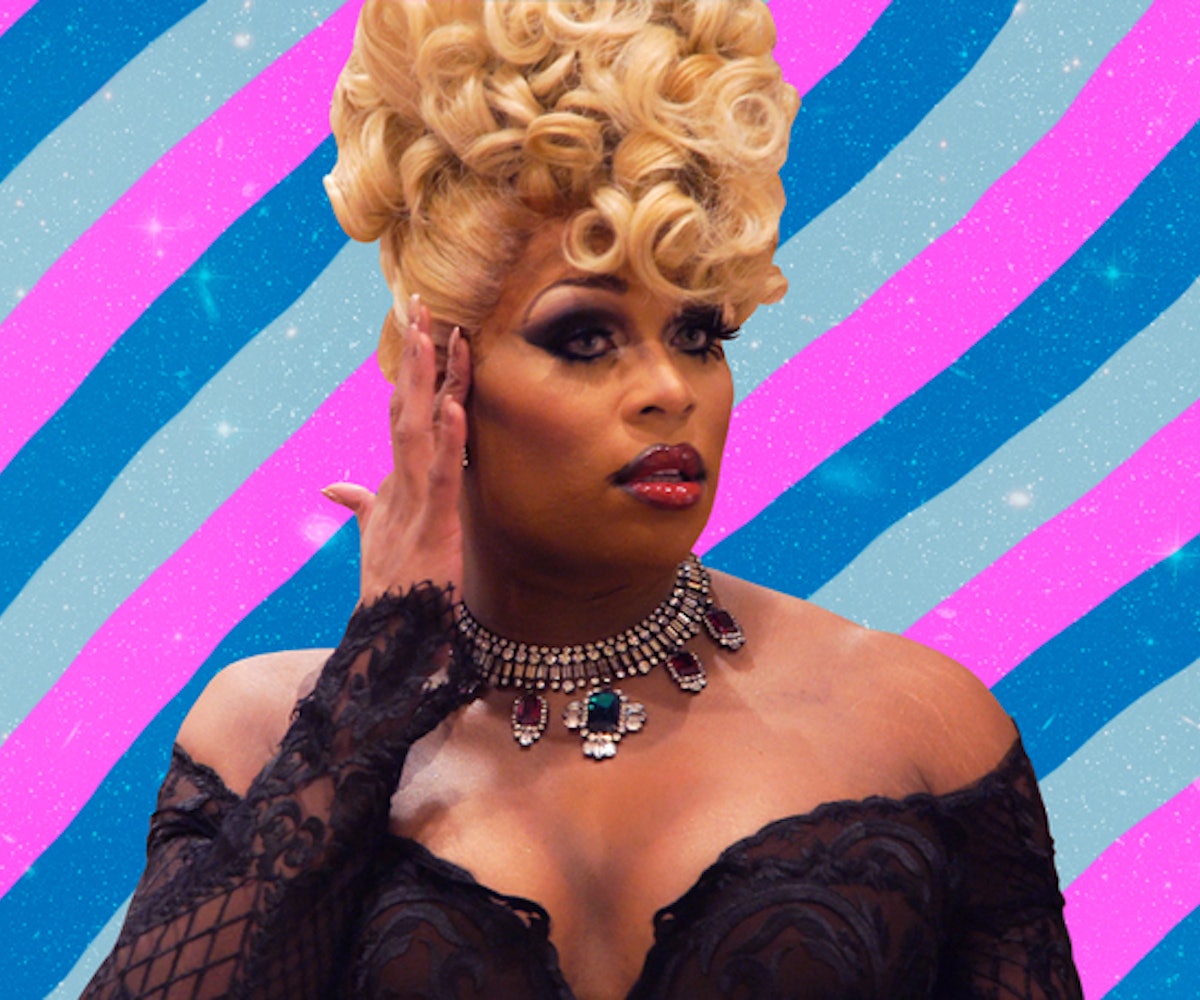 Peppermint is at a unique position at this point in her life. With two decades worth of experience in the New York City drag scene and a runner-up spot on Season 9 of RuPaul's Drag Race, Peppermint is now a global drag superstar. Peppermint is also openly transgender and has been from the moment RPDR started filming—a first in the show's history. She's in a unique position to not only bring her energy to stages, clubs, bars, and conventions around the world but also to educate her audiences that yes, trans women can be drag queens.

Through an extraordinary Indie Go Go campaign, Peppermint and director Oriel Pe'er are bringing her documentary, Project Peppermint, to life. "I realized I didn't have any home movies and good videos of myself from over the years, and I wanted to change that," she tells me. She and Pe'er exceeded their fundraising goal by nearly 50 percent. The people love Peppermint, and Peppermint loves people. "Everyone is performing," she says. "Everyone has their own type of drag. What I try to inspire, is possibility and escape."

What does that entail exactly? Charisma, uniqueness, nerve, and talent, of course, but also perseverance. That is, perhaps, Peppermint's true secret to staying fresh. Shantay, you most definitely stay.

What has New York City taught you about resilience?

It should be the number one facet or feature that one needs in order to stay in New York City.

Do you have a mantra of sorts, something you say to yourself to get grounded?

Not necessarily, but there was a moment in time when I realized I'm not going to die from "it," whatever "it" is. If I can't get to the show or if I can't pay my rent one month, it alone is not going to kill me. I’ll climb out of whatever situation I’m in as long as I want to.

How has your relationship to drag changed over time?

Not that much. In the beginning, my relationship to drag was primarily a way of being able to express myself as a woman. That was the main reason I did it. That might have been the only reason I did it: So I could feel like a woman and look like a woman. Over the years, I danced around that in many ways. I remember, in the beginning, I would have never destroyed the sanctity of my expression of a woman, meaning I would have never worn blue hair or done anything campy. I always wanted it to be real. It wasn't until much later, when I became a lot more comfortable with myself as a trans woman and was able to express myself in other ways outside of drag, that I realized I can have fun with my appearance in drag as well. My performance has been, and still is, always fun; once I get on stage, I have a good time. But, in terms of the campiness of my appearance, only when I realized my womanhood didn't depend on what I looked like in drag or my appearance in general, did I start to go over the top.

Would you say that unlocked a different side of you?

Initially, the role of Peppermint, as a drag persona, was forged and fortified in my idea of my own womanhood. It never really ventured too far away from that. Now, I'm more comfortable adding certain camp elements—let's call it glamour camp. The focus right now is on being recognizable. These days, drag queens are concerned about their brand, which was not a part of the equation years and years ago. It’s a reason for me to stay true to myself.

How has your identity as a trans woman influenced your drag identity?

I really separated my coming out as a trans woman from my drag persona and drag career in the beginning. I wanted the two things to be separate because I needed the time and space to sort through it; my trans-ness needed its own identity and room to grow. I really wanted to protect my drag career because I was afraid people would see me just as a woman and, for some reason, those two things—drag and being trans—aren’t congruent. I transitioned under my drag. I would go out every night under my drag, act the same, and have the same story. People didn't know I was transitioning physically and medically under my drag. They never saw it. Before I started my transition, I didn't feel comfortable presenting as male or being perceived as male. People never knew what I looked like outside of drag, which served as a great advantage to me as I was transitioning. The first time I came out to the world was on an episode of The Daily Show alongside another trans activist, speaking on the bathroom bill that was becoming a point of contention, right after North Carolina. I had the opportunity to express myself as a trans person who worked in the context of drag.

How do you handle the pressure to educate people on the fact that being trans and being a drag queen isn't mutually exclusive?

With patience. There's a lot to educate people on—and for good reason. I think one of the disservices people who aren't familiar with trans women do is write trans women off as drag queens or as men in dresses, dispelling womanness or womanhood as not natural or something that's temporary and costume, not permanent. Which is how a lot of people would describe drag. Naturally, there are many trans women who want to separate themselves from the world of drag because they don't want to be accused of being a drag queen or someone dressed up in a wig or a dress. I think that's really ironic because womanhood and femininity are often treated similarly, as a put on. "Oh, femininity is just lipstick and hair and frilly." Women are reduced to lipstick and makeup when we're so much more than that, both trans women and cis women.

How do you stay true to your personality and, not to riff off your name, stay fresh?

It's a struggle, honestly. It’s a struggle to stay connected to the same energy that I am connected to now. I've exactly 20 years of experience to call on, though, and the resilience that comes with that.