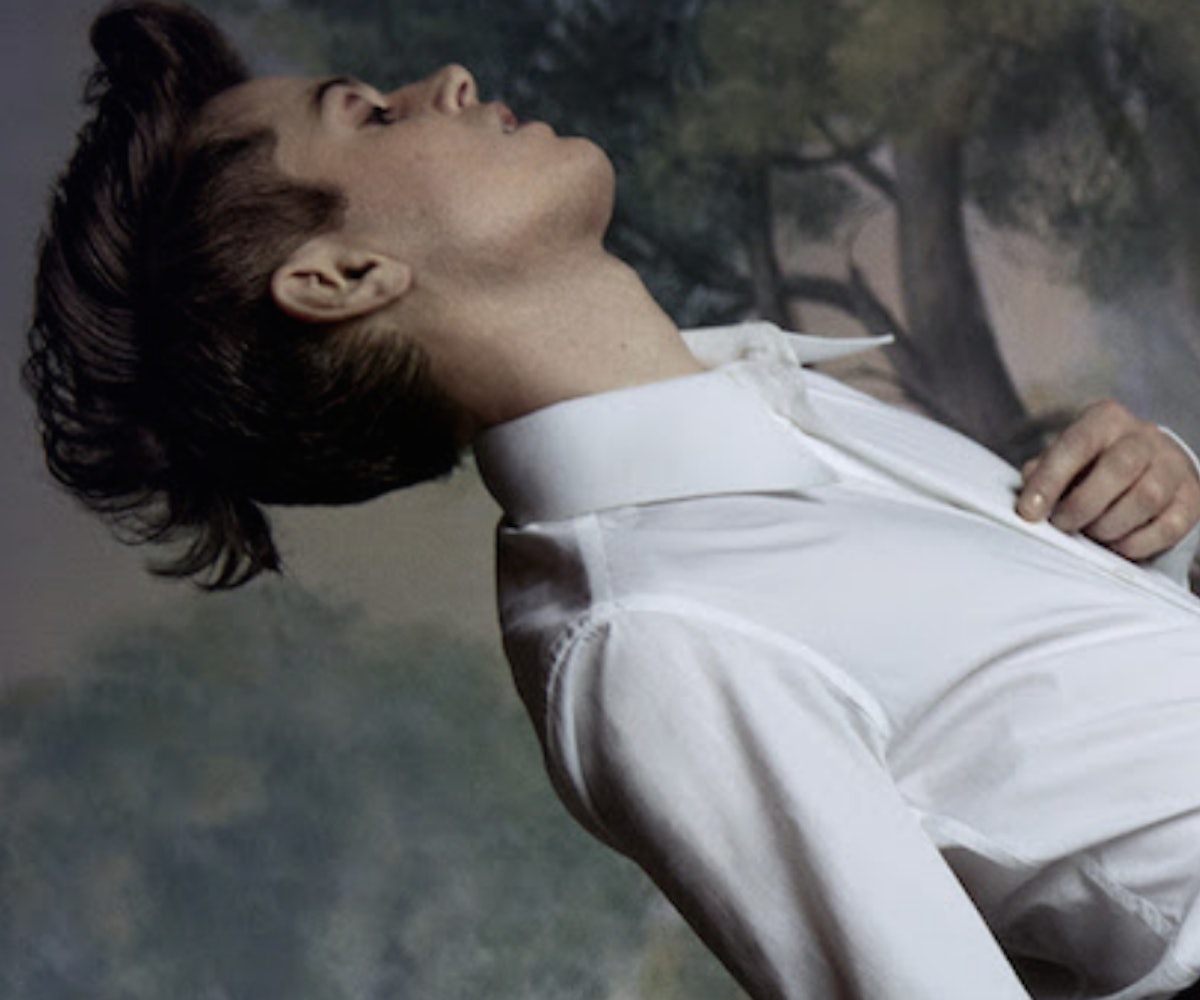 Last year, Perfume Genius, aka Mike Hadreas, released one of the most unbearably gorgeous albums of 2017: the theatrically transcendental and unquestionably intimate No Shape. One of the most tender artists working today, Hadreas is also indie pop’s most tireless innovator—which we can only assume led to his commissioning of an equally as amazing remix EP, which is aptly titled Reshaped.

If No Shape was a decadent and soaring declaration of love, then Reshaped is its mischievous, moonlit counterpart; think: less baroque ballroom, more dancefloor-ready. Featuring remixes by some of underground dance’s biggest names right now, including iconoclast producer Laurel Halo and newcomer King Princess, Reshaped breathes new life back to Hadreas’ masterwork.

Part-time internet troll and perennial heartstring-tugger, we wanted to speak with Hadreas ahead of Reshaped’s drop about where he is in the year since dropping one of his most personal works to date. And, of course, tackle important questions about topics as varied as the Cheesecake Factory and alien boobs. Read our Q&A with him, below.

You have quite the lineup of big names in dance on this remix record. How did you go about deciding and recruiting who's gonna be helping you out with that?

Essentially, just people that I'm fans of, and I did some digging, too. I don't know as much about [the dance music world]. All the electronic music I know is from weird, New Age music [people]. I joke around a little bit, but I'm really happy with all of it. And they all maintain the spirit of the original song—even if it's kind of faint or completely flipped on its head, it's still there somewhere.

All the remixes are epic in their own way. The album, to me, is very like fantasy. I thought a lot about Neverending Story and old, dark fantasy movies I watched when I was a kid. There were such weird mixes of emotions inside of them. They were kind of dark and haunting, but really beautiful and overly-saturated and... sweet at the same time. I wanted my album to be kind of like that.

That said, No Shape is an intensely personal album for you—was it weird to be handing over this heavily intimate work to other people?

It wasn't. I don't know if that makes me some weird person. I told people that you can sing on it, you can write lyrics, whatever. I don't know why I'm not precious about it. Both versions can exist at the same time. I don't think there has to be one hard version of the song.

Originally, when I first recorded all the sounds, I thought they were so slick and pop-y. Then after I got two weeks apart from it, I really found it a lot stranger than I [initially thought it was]. And, then recently, I was like, "What if we did make them pop-ier? What if we just did put a beat on it?” But, then [the remixes] ended up being a lot stranger than I thought it would be. Which I loved, but it never ends up being full-on pop. There's always something weird and subversive under it. And I think that's kind of why I took to everybody [I chose], even if it was subconscious. I knew that they were going to bring something kind of rebellious to all the songs.

No Shape itself is also a surprisingly celebratory record—at least in comparison to your past works.

The album is warm. I don't know if it was on purpose. I wanted to be kinder to myself. Kinder to my brain and more grateful and warmer about my life, because it's changed a lot—and for the better. But I don't know if I necessarily changed along with my circumstances. And I think I grow musically. Technically, I try to play chords and sing notes that I haven't sung before. Writing, I think about the songs in different ways and write about different things. For a while, I kind of wrote about that backlog of partying [I used to do]—kind of like mild journal entries. But I don't want to do that anymore. For this album at least, I wanted to write about how I felt now or how I wanted to feel. It was a little more immediate.

On another note, congrats on recently reaching one million Twitter followers. Who are some of your favorite people to follow?

Thank you. Well, there's Patricia Lockwood, I like her. She hasn't been on there much. Some people have kind of fallen off. @dril, though, geez! Still a classic.

But Twitter—it's become really depressing. I guess it's because everything is so horrible and you're reminded of it a lot. I have ended up on so many weird Men's Rights Twitter accounts filled with weird anime. I don't know. It's so bizarre to me that people can think that way, and so I feel like I can decode them or figure it out. But you can end up so grossed out.

Have you gotten into fights with MRA Twitters?

No, I just made a couple of jokes about Eminem and... he has some really obsessive fans! But it’s like if you tweet about Trump or whatever. There are people that just search the word "Trump,” looking for a fight. Like weird, eagle avatar people.

That feels more like a platform-wide problem. Like everyone is just kind of looking for a fight. Do you think fighting online in 280 characters is useful or the best way to try and move toward change?

I think so. It feels kind of dark right now, but, at the same time, I follow so many people that have so many different [perspectives]. I think it's a good way to look outside of your own experience and to read about ideas and different [views from] people who don’t share your same experience. That is not something people ever really actively seek out. Or, at least, as much as they should, and so I like it for that, for sure. But I've started blocking people. Just famous people and shit. I never really understood, like, muting the word "Trump" and stuff, because I felt like I could clue into everything and still not be overwhelmed. But I've felt a little overwhelmed with everything, so I'm kind of tuning out a little.

On a brighter note, are there any parts of Twitter that you do enjoy?

I love all the memes! I love them all, that's what's really heartening to me. That there'll be something really nonsensical and just bizarre and silly, but it'll have 100,000 retweets. That's what makes me feel good about the world, I think. It's that this ridiculous, dumb thing can have everybody cracking up. It's really heartwarming to me.

That's just how I am on my internet, too. If it's not funny, then I don't really have time for it. Some of these Twitter people are super-serious and into it, but I just like shitposting, which is what they call it. I didn't realize that until later.

Do you ever get in trouble for any of your shitposts?

No, but I think it's confusing for some people that do like my music to see some of my tweets. Like, if somebody has a really deep connection with one of my songs and I'm just posting alien boobs on Twitter for three hours. But also a lot of people on Twitter don't even know I make music at all. But that’s the vibe that I am on. You can be in a dark place and then be in an alien boob trance for like two hours... I think if you know one direction, then you can feel the other one. I don't think you can be truly, insanely joyous if you haven't ever felt the flip side of it.

I’ve also really connected to your online persona in the sense that you’re a big proponent of the Cheesecake Factory.

The thing is everything is good at the Cheesecake Factory. Everything's good. It's science-based. It's a formula, there's math, it's all good!

What's your go-to dish though?

Bringing in the Red Robin, too! I just really admire anyone who also has an affinity for casual chain dining.

It's comforting to me. I know there is something problematic about that, but a strip mall is very... I feel at peace. Or a food court or something is weirdly home to me.

Food courts are tight. This is also problematic, but my go-to is Panda Express.

Oh, I haven't been to Panda Express since I was a teen. My adult body can't handle all the sugar.

How do you handle the Cheesecake Factory cheesecake then? Those giant, hulking slabs…?

Reshaped is out June 8 via Matador.