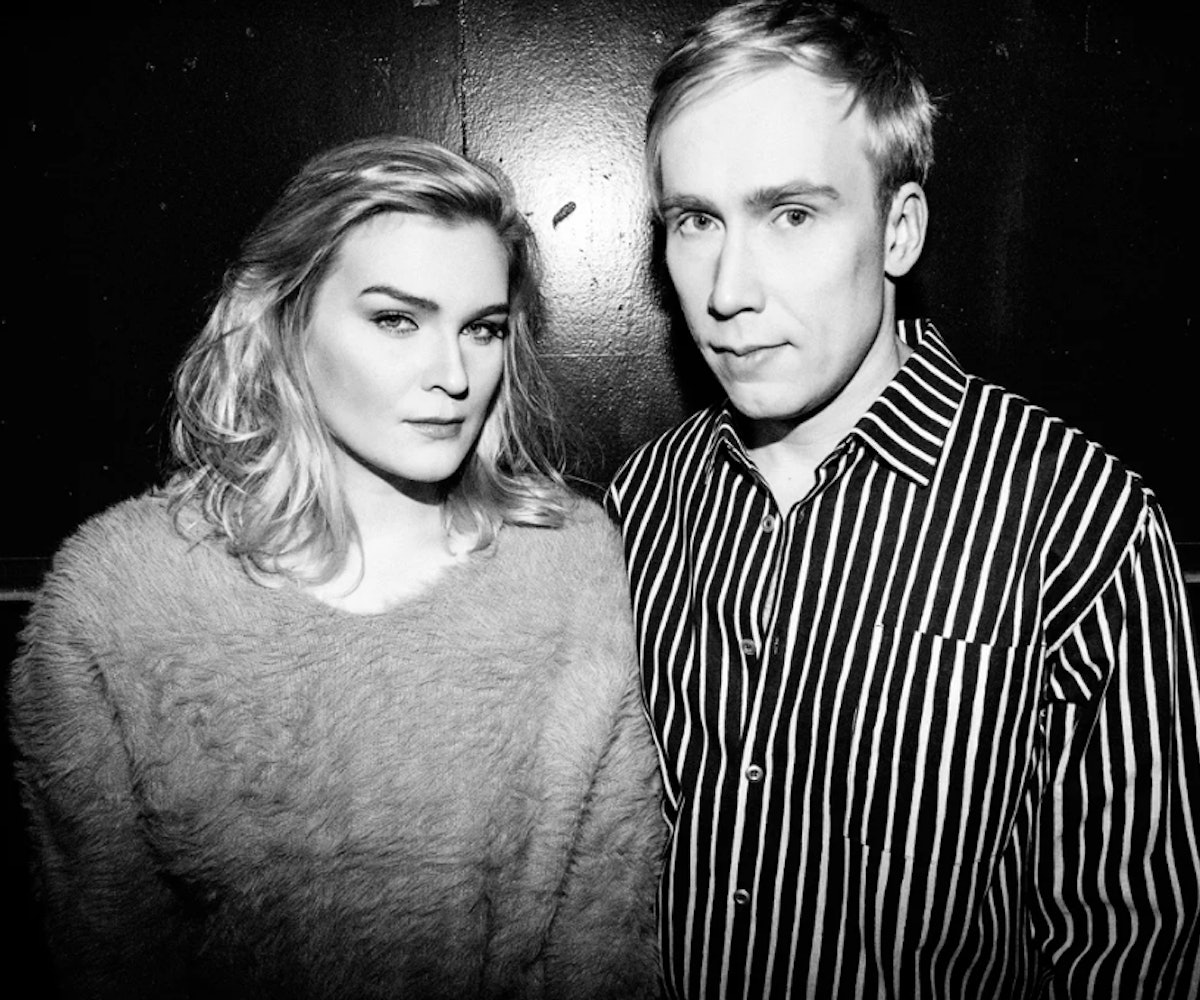 Before Hanna and Tommi Toivonen can properly welcome me into their home, Hanna switches on a sun lamp. Helsinki winters can get dark, she explains. And like everyone else in Finland this time of year, she could benefit from a serotonin boost. Even so, Phantom know darkness—and can laugh at such an obvious parallel between physical and emotional states. (The observation that they look cool when they perform, leaves Hanna pulling faces behind a curtain of shocking pink hair and Tommi pretending to push up an imaginary pair of horn-rimmed glasses.) But from the haunting cover of their debut album, MMXII, to their ghostly electro-pop (think: Moderat, Portishead, and Nine Inch Nails with a touch of jazz), it’s clear this band isn’t afraid of feeling feelings.

Originally formed on a whim shortly before SXSW in 2012, Phantom was simply a way for work friends Hanna and Tommi (then Tommi Koskinen) to justify a trip to Texas. That is until their single “Scars” was name-checked on The xx’s blog. The unexpected endorsement kicked off a series of events that the two ruefully refer to as "Bullshit Bingo." There were the bright moments, like performing at Helsinki’s Flow Festival and being courted by many labels they had admired. But it was also a case of too much too soon—and being surrounded by people explaining the business almost threatened to sink the band just when they had decided that they even were a band.

“It’s something in the Finnish culture,” Hanna explains. “You don’t talk bullshit. Say your thing; if you mean it, great. If you talk bullshit all the time, not meaning anything, not doing anything—I hate it! That’s really hard for me to be with that kind of people. I feel like maybe I’m so naïve that I want to see that there’s good in everyone. I do genuinely believe that there’s good in everyone. But I feel like, with some of the entertainment industry, those people are just there because of the bullshit. That’s where they’re also full of it. That dismisses both the audience and the art form itself. There are so many of those people. That’s probably the biggest lesson that we got.”

“That kind of feedback almost destroyed us,” Tommi confirms. “People trying to influence you to do things you don’t actually want to do. And then going through the crisis of our lives of getting tougher. That all resulted in a four-year ice.”

Yeah—getting together. By both Hanna's and Tommi’s accounts, their musical partnership had spilled over into romance before either realized what was happening. (Some credit goes to James Blake and Jack Daniels for providing the final push—details they recount with a blush.) According to them, not only did the relationship make them happier, it made their music better.

“We found each other and started to find the confidence from each other and became a team,” Hanna recalls. “Other people didn’t have that much to say.  We had the confidence from us. We weren’t alone. And then we started slowly making progress with the album itself when we filtered everything out from other people. We started to think about what we wanted to sound like and what we wanted to do as a team, as artists. Obviously, there’s good feedback that you should take, and I honestly believe in it. Feedback is like food. If it’s rotten, it can be poisonous to you. It can kill you. But if it’s really good, you should eat it and you should take something out of it.”

MMXII isn’t an exercise in melancholy for melancholy’s sake. Between the jagged beats of Tommi’s self-built UFO beat machine and Hanna’s jazz-trained vocals (comparisons to both Florence and the Machine and Adele wouldn’t be wholly out of order), the album’s key descriptor is “expansive.” Anxiety makes an appearance, as does the ghost of crappy past relationships. A close friend is eulogized on “Shadows.” And opening track “Lost” name-checks nothing less than the “10,000-year puberty of the human mind.” Phantom has two sets of eyes—and, like all of us, they’re desperately trying to take in everything the world has to offer.

“I think music today is in a bad state,” Tommi muses. “It’s in a crisis. No one gives a shit about anything but themselves in their expression. Self, self, self. It’s all about I’m here, I’ve had this bad day. I think that’s a rule that should be broken more than ever.”

“I feel like there’s a responsibility in being an artist,” Hanna adds. “Art itself is a way of talking to people and presenting ideas that are more digestible than they could be in other forms. I feel like music as an art form can change things. It can speak louder than politics ever can. We’ve seen it in history, and we have to believe in it in the future as well.”

She makes clear they have no fear of the dark thoughts running through their heads. Enacting change, even through an artistic platform, can be painful. But the darkness only makes the light brighter. It’s an idea found in “Dance,” a love song Hanna wrote for Tommi. Like many of their other tracks, the idea of death is woven into its musical fabric.

Hanna’s not just talking about the track now. It’s clear from her tone that this has become a life motto.

“It’s horrible for the people that get left behind,” she continues:

The biggest sorrow will be on those people. But that feeling has made me do things. I’ve also been really scared. I’ve had problems with anxiety. But the kind of presence of death reminds me to not use this life on things that make me anxious. I want to do things in my life, [so] that whenever death will be here, I can say I’ve lived fully. I’m not scared because every moment that I’ve had, I’ve lived. I’ve done the things that I want to do. I haven’t compromised. I haven’t let life let me down. That’s the beauty of the darkness.