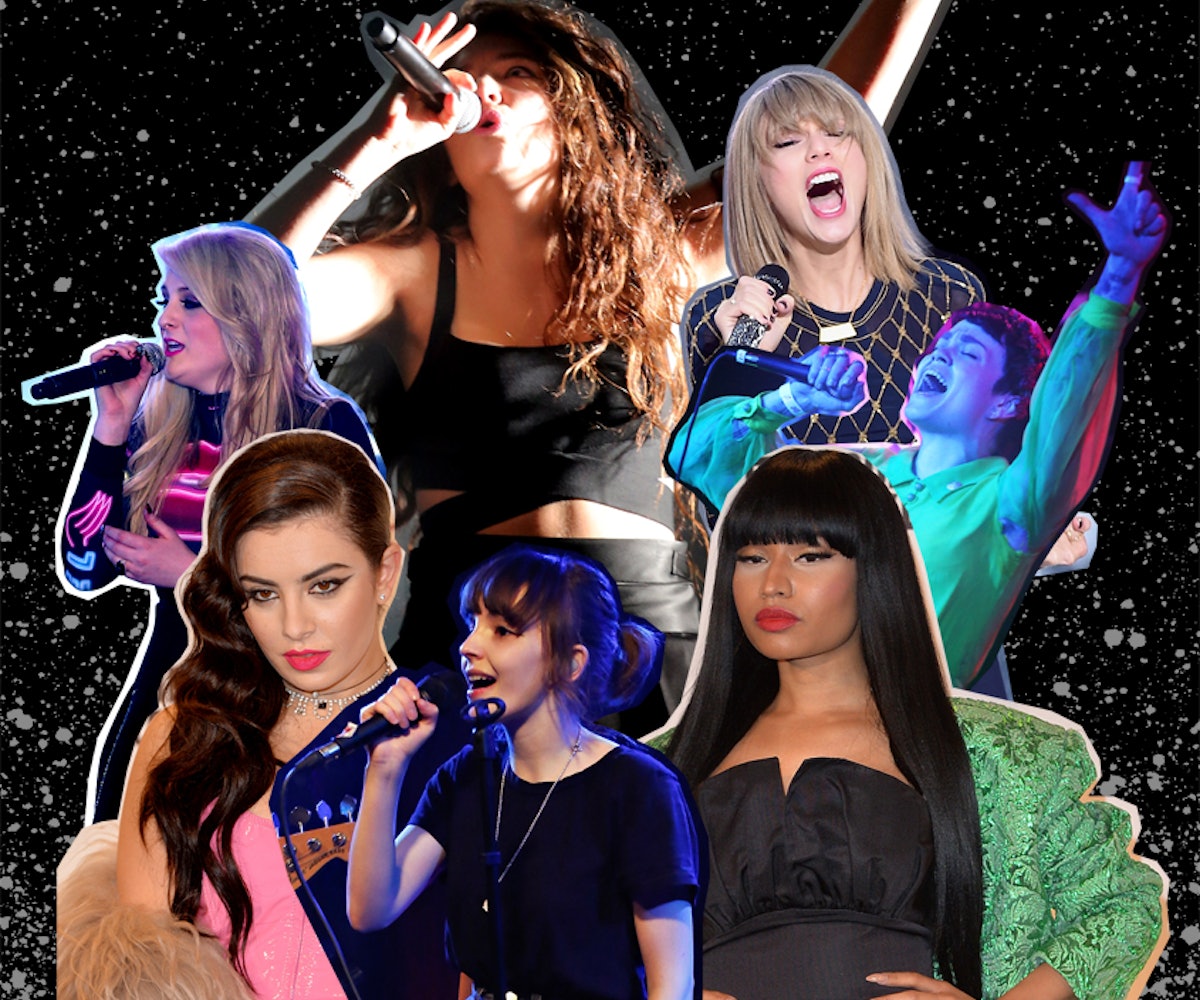 On Sept. 20, for just the seventh time in history, solo female artists held all five of the top spots on the Billboard Hot 100. It was only the second such occurrence since Feb. 13, 1999—the very first time ladies put the pop charts on lock—and for many cultural commentators, it signaled a kind of victory, the culmination of big year for women in music.

It was the right celebration at the wrong time.

The significance of that sausage-free Sept. 20 singles chart wasn’t simply that it featured five females. “Women in music” is no more a genre than “men in literature,” and the idea of using sheer numbers as proof of progress or the emergence of some cultural movement is reductive and condescending to artists and fans alike. It recalls D. L. Hughley’s great Original Kings of Comedy bit about white people claiming they’re not racist because they’ve had three black people over their house.

“If you know how many black people been over your house,” Hughley says, “you racist like a motherfucker.”

What’s really interesting about the five ladies on that Sept. 20 chart—and what supports the notion that this has, indeed, been an important year for women in music—is that to some degree, each of them has engaged with the topic of feminism, the only “F word” that still has the power to fuck with people’s heads. In August, when sexy-and-proud wife and mother Beyonce performed at the VMAs in front of a giant screen reading “FEMINIST,” she didn’t spark a pop-cultural conversation so much as she intensified one already well underway.

It’s a healthy and wonderful thing, this conversation, even if often sounds like a whole lot of noise.

Like “punk,” “feminism” can mean almost anything you want it to. While it’s possible to find female empowerment in Meghan Trainor refusing to apologize for her big butt in the retro-pop smash “All About That Bass” (No. 1 on that Sept. 20 chart), there’s another kind of strength to be derived from “Anaconda” (No. 3), on which Nicki Minaj treats her ass not as a fact of life, but rather a force of nature—something to be worshipped and feared.

If it’s troubling that both of those songs contain the phrase “skinny bitches”—one of those terms that suggests women are their own worst enemies—twiggy Taylor Swift will probably just do like her ubiquitous No. 1 hit (No. 2 on Sept. 20) says and “Shake It Off.” Taylor’s not in the business of hate-hate-hating on other female artists, and now that she’s hanging out with Lena Dunham, she’s been getting in on the feminist action.

According to Swift, whose recent 1989 album may embolden young women who see themselves in neither Trainor nor Minaj, being a feminist means “just saying that you hope women and men will have equal rights.” That’s almost the exact definition Lauren Mayberry, lead singer of Scottish synth-pop greats Chvrches, uses in a thoughtful essay she penned for the Guardian in September 2013.

“The truth is this: I'm sick of having to publicly explain my sexuality, my confidence, my womanhood and my power,” Way writes.

It’s not that she’s denying her sexuality or trying to be “one of the boys,” as she once felt she needed to do. Quite the opposite, in fact. It’s just that she’s tired of double standards. So is Meredith Graves, frontwoman for the mega-fearsome Syracuse noise outfit Perfect Pussy. In her much-discussed talk at September’s Basilica Soundscape festival, Graves examined the concept of authenticity, asking listeners to consider why Andrew W.K. gets celebrated for creating an ironic persona while Lana Del Rey and Lady Gaga get blasted for changing their names and wearing costumes.

Among the artists Graves name-checked is Lorde, though unless you count her stage name—kind of a necessity when you’re born Ella Marija Lani Yelich-O'Connor—there’s little artifice driving the New Zealand teen’s celebrity. That’s one reason she stands to emerge as a real heroine of this feminist-pop movement, such that there is one. Mostly, though, it’s her preternaturally intelligent songwriting and willingness to call bullshit wherever she sees it. She’s both an old soul and an everyteen who won’t play glamour queen, and she’s bridged the gap between alternative and Top 40 in ways no artist has done since Alanis Morissette.

Ideologically, Lorde’s progressive bona fides are rock solid. She’s come out against materialism and the industry’s crass objectification of female artists, and while she sees feminism as “completely natural,” even she doesn’t pretend to fully understand it.

“I find a lot of feminist reading quite confusing and that often there’s a set of rules, and people will be like, ‘Oh, this person isn’t a true feminist because they don’t embody this one thing,’ and I don’t know, often it can be a gray area and it can be a hard thing to navigate,” she told Rookie’s Tavi Gevinson in January.

Maybe she’ll find some answers by chatting with her good buddy Swift or her contemporary Mayberry, who appears with Chvrches on the soundtrack she curated for The Hunger Games: Mockingjay, Part 1. Despite criticism that she’s too hard on fellow female pop stars—she’s famously dissed Miley Cyrus and Selena Gomez—Lorde has plenty of first-rate ladies on her Mockingjay collection, which debuted today at No. 1 on iTunes. One notable inclusion is Charli XCX, who’s getting ready to blow up with her forthcoming Sucker.

Like Lorde, this punky British synth-pop diva is a chart threat with serious indie cred. She’s a gothed-out Gwen for Grimes fans, Britney meets Bow Wow Wow, all five Spice Girls in one. She can use words like “fancy” and “girl power” without sounding like your grandma, and if you ask Atlantic Records GM David Saslow, she’s emblematic of something big that’s bubbling up.

"She’s got a genuine collection of friends in the business that are her peers,” Saslow says of Charli, “so it definitely feels like she is a part of this grand moment of amazing female artists right now."

Before the moment has passed, it’s possible we’ll see a Hot 100 with females commanding even more of the peak positions. It’s not unthinkable a week will come when ladies run the top 10. If this happens, it’ll again be cause for celebration, but also for a redoubling of efforts, a ramping-up of the debate. There’s no magic number that lets America sit back and declare victory in the war on sexism.

Now and forever, as Hughley might say, if you know how many ladies have been on your pop chart…