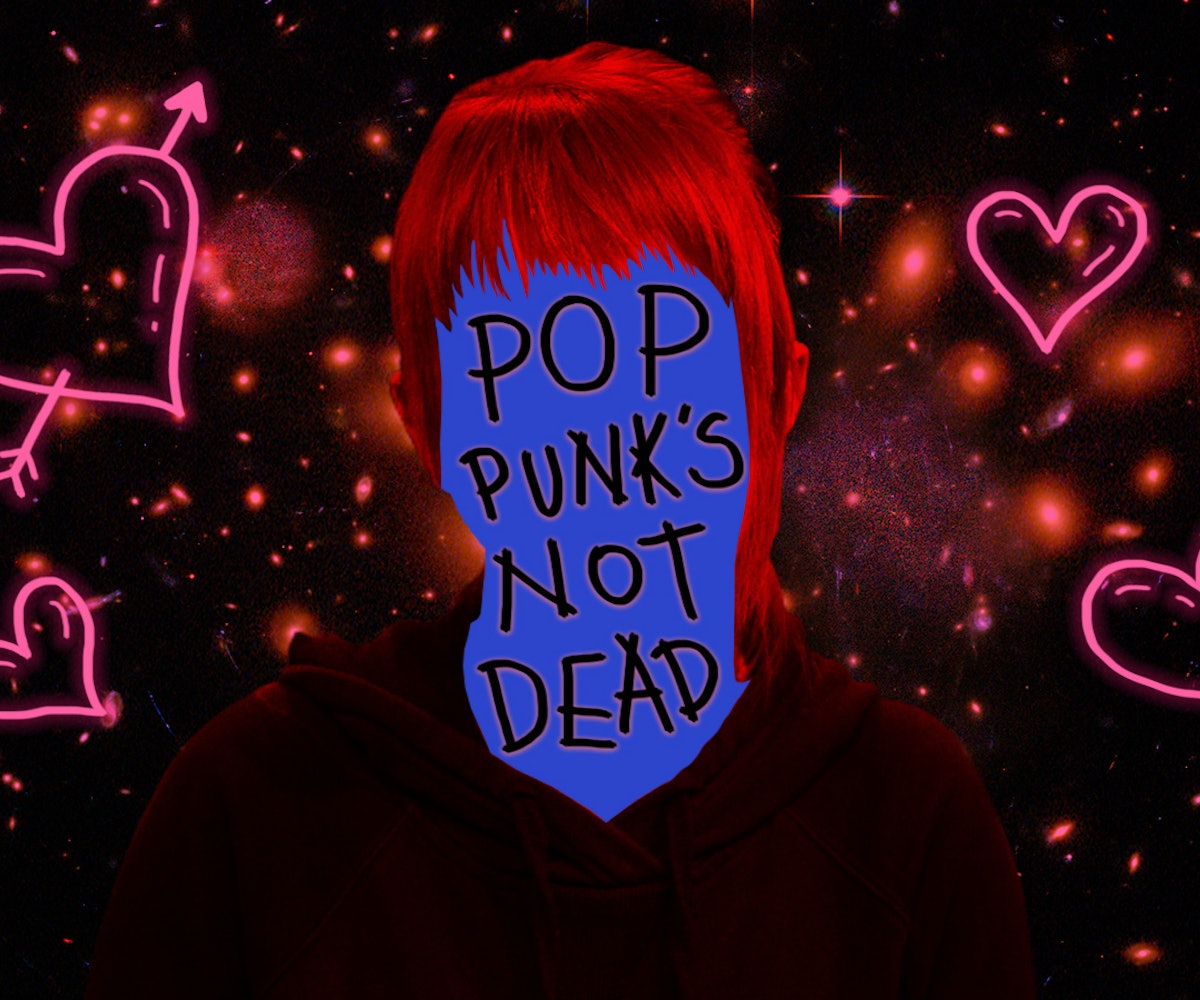 There's nothing like the sweet sounds of Cartel in the morning. Teenage angst pairs surprisingly well with getting ready for the very adult responsibilities you have later in the day. You know what they say: Walk like you're listening to Beyoncé when you're actually internally sobbing to "The Minstrel's Prayer." Sigh. Feelings, guys: They're real, and would ya believe they get more complicated than when you were LiveJournal'ing about them back in the mid-2000s? Crazy.

Pop punk, unlike MySpace, has never truly gone away. Its mainstays, like Paramore, are still around, touring, and putting out new music. (The Maine, for example, drop a new album April 7.) It's a revival many who think themselves too cool for whatever rolled their eyes at in the beginning, but chances are you'll find those same people living their HxC fantasy at one of the many successful Emo Nite parties in L.A. and NYC. Teenage angst, after all, is forever. It's only now, after the ironic love for the bands whose lyrics once populated our away messages and profiles has become earnest, that reveling in its generational permanence is en vogue.

This should not come as a surprise. The generation that came into itself listening to these bands are now the people making serious impacts on pop culture. Our collective shock in realizing a certain album turns 10 resonates louder than ever because nostalgia's power is incomprehensible. The communities that came together before come together again, but with hindsight and a stronger understanding of why certain bands, songs, and albums had (and have) their hold on them.

For a kid struggling with their gender identity, sexuality, and just plain fitting-in, pop punk and all its subgenres provided an escape and elevated its leaders to idol status. It's no wonder pop punk's mid-2000s peak aligns with MySpace's, an outlet many young queer people used to come out and claim their sexual and gender identity on. Having young, cis (mostly) heterosexual men wear eyeliner, straighten their hair, and sing about boys tasting like ex-girlfriends only sweeter was subversive at the time, but it allowed those youths to see some version of themselves in the media and inspired personal exploration. Even if a listener wasn't struggling with their identity, hearing these (somewhat) grown-ass men sing about their feelings was (and still is) vital to breaking the "fight like a man" mentality that our society imparts on its boys.

Science will tell you the music we listen to during our adolescence sticks with us throughout our lifetime. It has something to do with our brains being sponges, our personality overhaul in puberty, yadda yadda yadda. Again, it's nostalgia. And nothing new has yet to capture the craving for youthful abandon as well as pop punk's heyday did. Songs like "The Great Escape" by Boys Like Girls and "Check Yes Juliet" by We the Kings were fantastical back then, but there's a sincerity to them today. As teens, the escapism was geared toward the future, freedom, and relishing in the vibrancy of youth.

Today, the escapism is rooted in a desire to go back to the feelings we felt as teens. The future happened (probably not like you thought it would) and the vibrancy faded. "Throw it away/ Forget yesterday/ We'll make the great escape" sounds nice, doesn't it? If only it were that easy. And back then, it was—well, it was believable. Jadedness is very real, and even romantics feel the unbearable weight of reality. But feeling like an outsider is universal and timeless, and there aren't many musicians tapping into that vein as boldly as pop punk once did. It's ability to conjure moments of abandon make it a genre worth glorifying. Pop punk reigns just so long as long as there are misunderstood individuals out there. As The Starting Line once said, "We got older but we're still young."