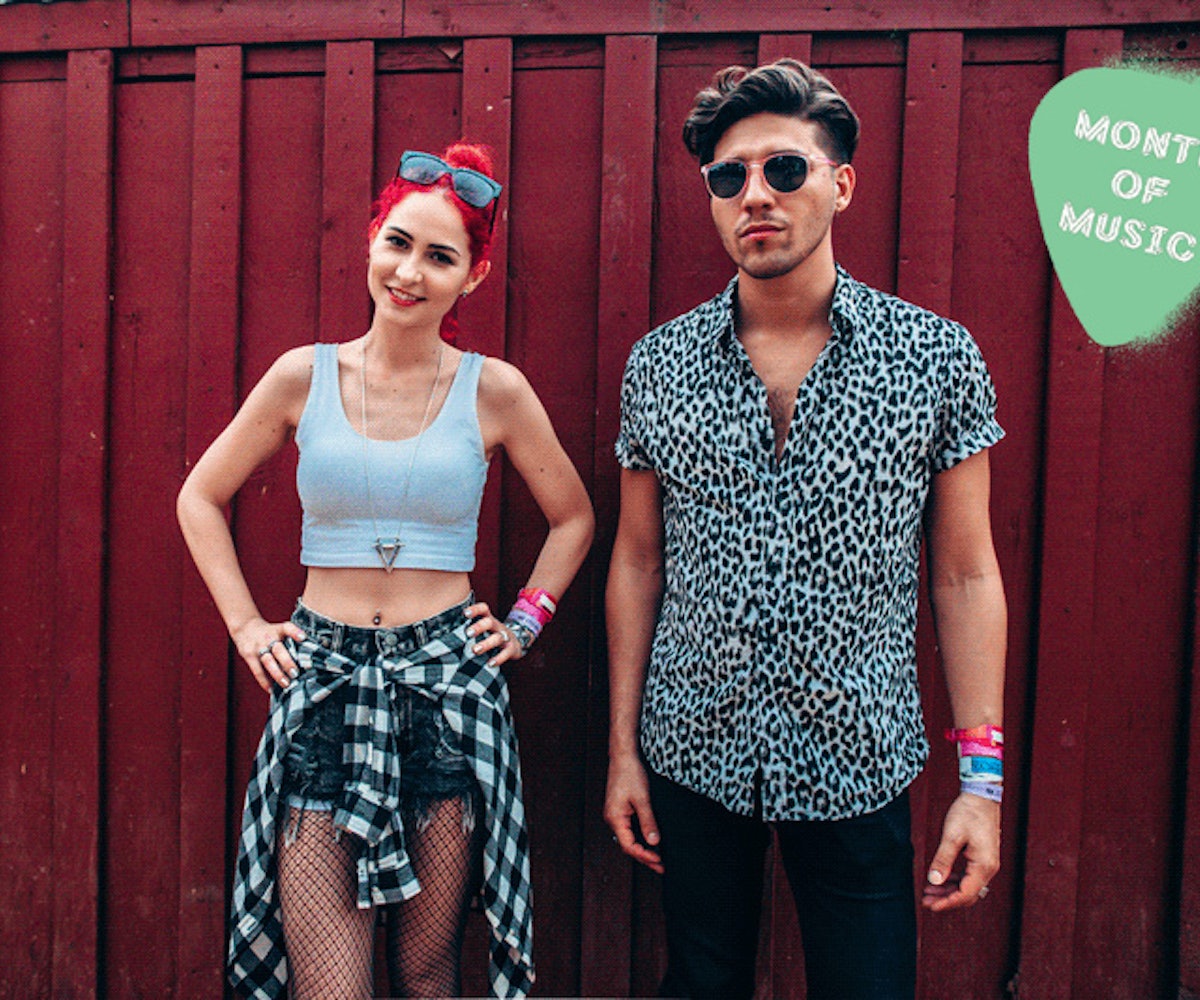 We share music because we want to connect with others on a deeper level. We want to relay and relate to a message that can’t be said with just words. This April, NYLON is dedicating six days a week to introducing you to new artists and budding favorites. With interviews and GIF portraits done down at SXSW, NYLON’s Month of Music is an exercise in finding aural pleasures outside of the Top 40. It’s an exercise in challenging you (and ourselves) to not stick to one genre. But above all, it’s a celebration of bold voices and sheer talent. Enjoy.

There's a brightness to Crista Ru and Mike Del Rio. There's a certain electricity to them that's modern, classic, and infectiously playful. Together, they make up the band POWERS. They burst on the scene in 2014, as a featured act on The Knocks' track "Classic." It's been nothing but positive accolades since. Their 2015 Legendary EP is rich with disco-funk pop that revels in its own genre-bending light. Their dynamic together is just as celebratory. The only direction for POWERS to go is up. Be proud to say you knew them when.

Crista Ru: “Hot.” I feel like no matter where you are, if you turn that song on, you’re going to feel it. It’s going to get you moving. It’s like the equivalent of a musical cup of coffee for your ears. It’s very energizing. It’s got a really heavy bass line and a disco feel. It’s very “power to the people.”

CR: It depends on what type of person you are, for sure.

Mike Del Rio: It depends on what "me time" means to you. “Beat of My Drum” was written from a perspective of solitude. I felt like I was in a very weird place. That’s a song you can dance to in the shower. It’s kind of "me time," kind of in the shower, in front of the mirror in your underwear. You don’t want anybody else to see you, or maybe you do. A little voyeurism never hurt anybody.

MDR: It depends on what you want.

CR: We did a song with The Knocks called “Classic” and it’s essentially about hooking up with somebody. In the root of the lyrics, that’s what it’s talking about. It’s got that really chill, sexy, summery vibe. Like at a festival, like you are right now.

Can you recall a moment in your life—whether it’s a song, a show, a video—that convinced you that you wanted to be doing music?

CR: “Bittersweet Symphony.” When it came out, I was in elementary school and it was shortly after Meredith Brooks had released “Bitch” and I was like, “Oh my gosh. This is amazing. People do this for a living. They’re grown-ups, they do this, and they play music. How do I do that?” It sparked everything in my brain. I realized I could actually do that as an adult—seeing all the music videos and actual people—[it] showed me it was tangible and it could happen. For me, that was really the catalyst.

MDR: I’ll support that answer, it was really good. When I was younger, Frank Sinatra was a big thing in my house. I always liked Frank Sinatra; every Christmas or New Year's Eve, we would go to my uncle’s house and do karaoke. We had a karaoke machine. I remember I had to be two or three years old, singing “That’s Life” by Sinatra. I liked getting the attention, and holding the microphone felt so empowering. From that age on, I knew I wanted to do this for my life. Just performing and just being a part of music.

CR: Actually, we were recently at the Grammy party for Republic and we were rocking out on the dance floor. A couple of friends of ours were like, “Paul McCartney and Beck are next to you.” We’re dancing and dancing, trying not to make it obvious and turn and look. Man, we freaked out. Like, freaked out. We were like shoulder-to-shoulder. It took me about 15 or 20 minutes to muster up the courage and go up to Paul and interrupt his fun just to be like, “Thank you so much for making music.” He sings and plays bass—he’s everything. Also, Mike loved the Beatles.

MDR: It was just a really interesting full circle.

MDR: We were all in that room because of essentially what they did. It was pretty interesting to dance with them.

MDR: Dead or alive? I would love to hear Bob Marley cover some of our stuff. That’d be fucking sick, actually. I could see Bob Marley doing “Loved By You.” That’d be pretty amazing.

CR: I definitely like to indulge in some activities that involve smoking [laughs]. I like to smoke a little if I can sit down, in one place for longer than 10 minutes, and enjoy being a human and relax.