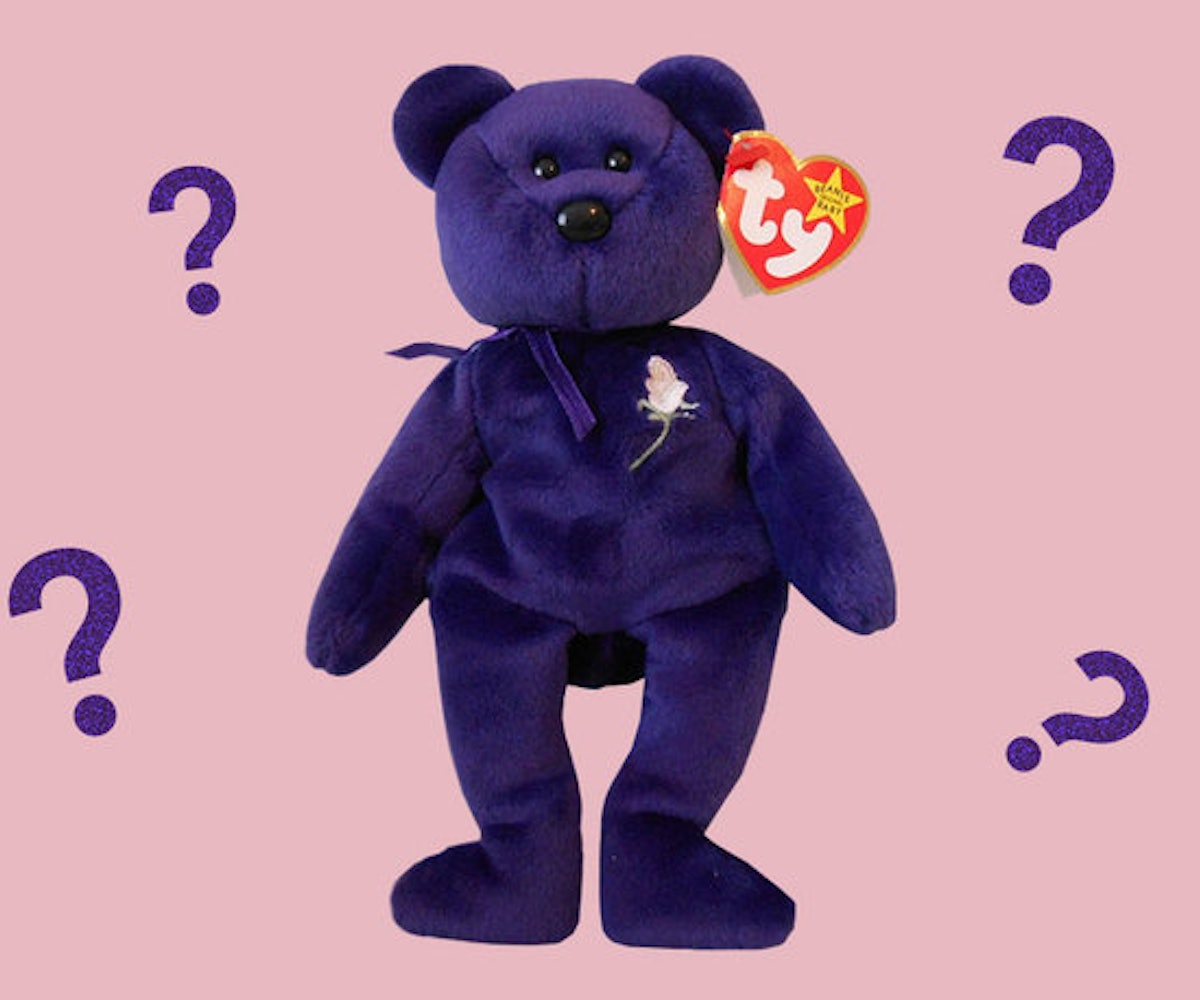 The mid-'90s and early '00s were a giant scam. With internet culture still trying to figure out where it wanted to go and who it wanted to be, the opportunities for brands and companies to get people to spend money were fresh, forward-thinking, and ultimately convincing. Like, did I need a limited-edition "gold plated" Pokémon card as an exclusive purchase from Burger King? No. Did I ask to have it because I thought it was going to be a bona fide collector's item? Yes. Nothing was more convincing as a collectible though than Beanie Babies.

Beanie Babies were introduced to the world in 1993, and by 1997, they were a staple of adolescence (and, frankly, beyond). Hey, put a birth date on something cute, and suddenly you've got a product that's both personal to the buyer and easily marketable. Collecting the plush animals with irritatingly simple names (Pinchers for a lobster? Groundbreaking) became the thing to do for kids, so it's no surprise the buzz surrounding their inevitable value increase would creep into the Zeitgeist.

As playground lore would have it, the Beanie Baby bears were the Beanies to collect. They became status symbols among kids. Who had more and who had what actually mattered; they were their own plush form of currency. We were told to keep the tags on and not dirty the toys because they'd be worth something someday. And the Princess Diana bear became the pinnacle of that mentality.

Ty introduced the Princess bear on October 29, 1997, less than two months after Princess Diana had died in a horrific car crash in Paris. The purple bear decorated with a white rose and green stem instantly became the bear to have, not only for kids but also for adults who were more clued-in to Diana's history. Ty originally only allowed its retailers to sell 12 at a time, which fueled the hype and specialness of the bear. All proceeds of the purchase would benefit the Princess Diana Memorial Fund. Ty's inventory restrictions, however, resulted in online resellers upping the price well into the hundreds of dollars. At the time, more than 10 percent of eBay searches and transactions were Beanie Baby-related. You can bet the Princess bear made up a sizable chunk of that. How misguided we were.

Despite the hype, time spent searching, and dollars spent, the Princess bear is, well, not worth much these days. Ty Collector, the go-to place for all your Beanie Baby needs, says even the rarest of Princess bears (first-edition versions made in China, with a specific type of text alignment on the swing tag) have an average worth of $28. So much for those "RARE Mint Condition" Princess bears selling for $60,000 on eBay.

Owning the purple bear is not, then, like having a winning lottery ticket in your hand. And yet it still retains a singular value of its own in its ability to inspire nostalgia and serve as a reminder of the life of Princess Diana, a veritable force of nature, whose great compassion for others still resonates today. That, in the end, is priceless.

NEXT UP
Entertainment
On "Princess Diana," Ice Spice Beats The Memes
Culture
11 Must-Read February 2023 Books
Entertainment
Chloe's "Pray It Away" & 9 Other New Songs Out This Week
Culture
Phoebe Dynevor Will Not Return for Bridgerton Season 3
Style + Culture, delivered straight to your inbox.