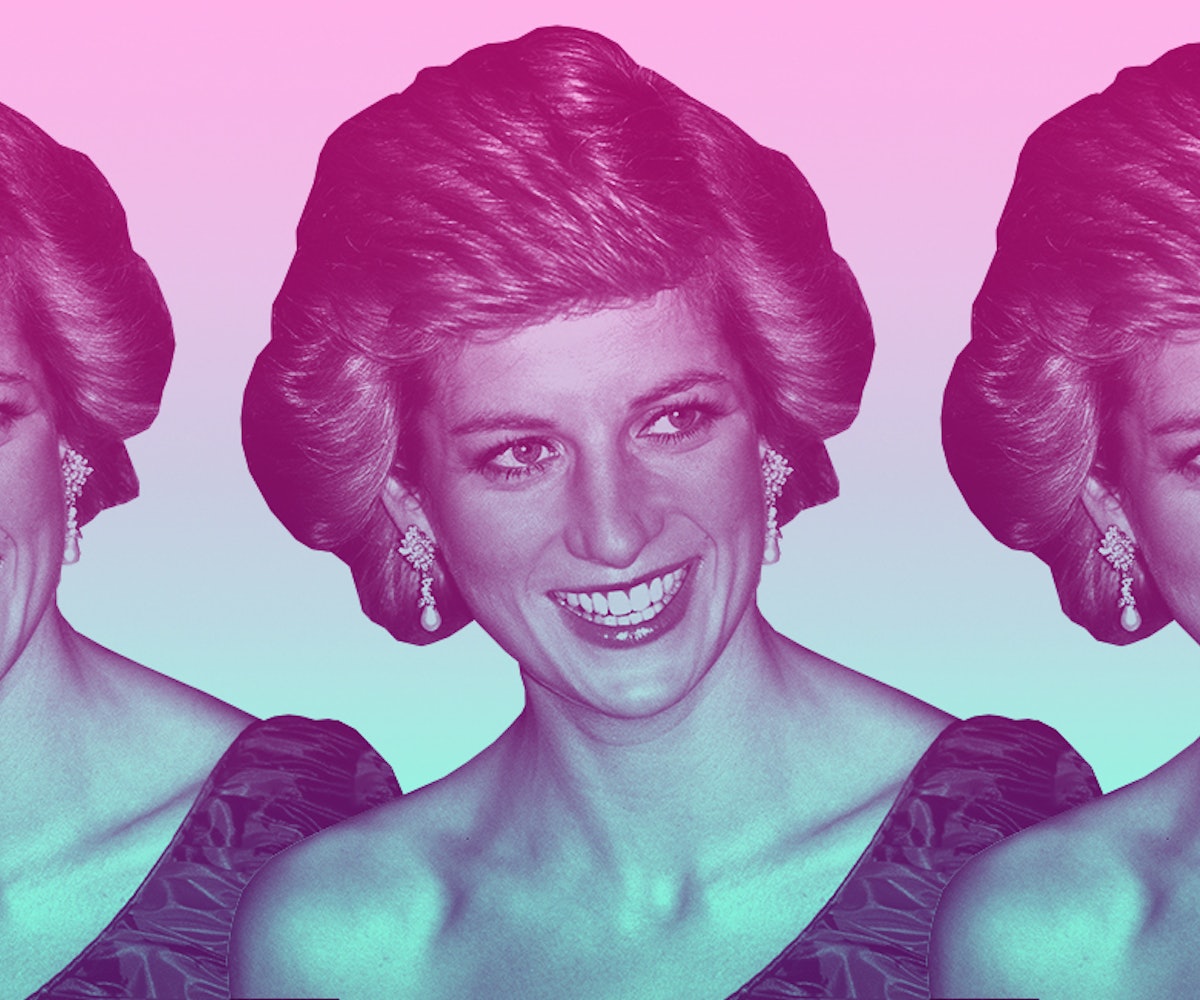 The last time I was in Paris, I took a photo of myself in a hotel bathtub; only my knees and hands are visible, more prominent is the bottle of bubbly French mineral water and the book I was reading, Alexandra Kleeman's You Too Can Have a Body Like Mine. I went to post it on Instagram, and scrolled through the possible location tags, pausing—recoiling, really—at one of Instagram's suggestions: Death of Diana, Princess of Wales.

Well, actually, the location tag that I saw that day, about a year and a half ago, read something like, "Princess Diana's Tunnel of Death," alluding to the nearby roadway where the fatal car crash which took Diana's life occurred. But it seems like someone at Instagram was alerted to the crassness of the particular wording of that location tag, and the name has since been changed; a scroll through the images which populate that location shows that they mostly consist of selfies near the entrance to the tunnel; some are shots of the memorial that sprung up last August, on the 20th anniversary of Diana's death; one is an image of a woman at night in front of the Eiffel Tower, with a tiara perched in her long blonde hair. All speak to a lurid fascination with the late princess, who has become an icon of sorts on social media, her image proliferating across feeds, her style still commented upon, decades after her death. (And, in case you're wondering, I tagged my post "Le Paradis du Fruit," because some things should be left alone.)

But so, Diana. That her style is iconic is indisputable, but that it remains so relevant as to inspire articles in which it is adapted in homage is exceptional, all the more so because it isn't only her gowns that have left a lasting impression, but rather her off-duty clothes. Is there a more perfect athleisure look than Diana in ugly grandpa sneakers, scrunched-down socks, bike shorts, and a funnel-necked Harvard sweatshirt? (No. No, there isn't.) Diana's casual wear predated the rise of normcore by a good 20 years, but in her affinity for the aforementioned ugly sneakers, bike shorts, and branded tops (besides the Harvard sweatshirt, Diana wore Northwestern gear—Meghan Markle's alma mater!—and tons of American flag-adorned shirts, leading writer Aminatou Sow to note on Twitter that this was "a woman who probably secretly wished her son would marry an american") can be seen the ultimate example of normcore. This isn't just a case of cool kids in 2015 wearing dad jeans in an attempt to look "normal," instead this is an example of an actual princess—one of the most singular positions in the world—dressing not just like a common person, but like a common American.

There are, of course, biographical details which make Diana so alluring; there is an abundance of photos of her, and relatively few interviews, meaning that her presence remains enigmatic, all the better to project our own feelings upon her. Diana is not unlike Carolyn Bessette Kennedy in that way, another much-photographed statuesque blonde, whose existence was tracked by the paparazzi all thanks to the fact that she'd fallen in love with her country's crown prince. Beyond that, Diana's narrative was one that was weirdly relatable to so many women—she was in a fraught, often loveless marriage; had hypercritical in-laws; struggled with disordered eating; loved her children fiercely; finally got to taste freedom, if only for a little while. Her tragedy was specifically her own, but universally felt; it is no wonder that her death is a defining moment in the lives of so many women who otherwise had no use for the British royal family.

But I think there's another reason that Diana has become an icon in our social media-focused age, and it has to do with the ways Diana, once she realized they were inescapable, performed for the cameras, and the ways in which, now that cameras and selfies and social media postings are part of almost all our lives, we perform too—for better or for worse.

Diana, though, performed for the better. Because although Diana was known for her antagonistic relationship with the ubiquitous paparazzi (there is good reason to blame them, in part, for her death), she also became determined to use her global renown for good works. Some of the most iconic photos of Diana are those of her visiting the victims of landmines and walking through an Angolan field filled with the active bombs. Then, too, Diana's 1987 visit to an AIDS hospital and the images of her touching an AIDS patient, at a time when many people shunned and stigmatized those with the disease, made a huge impact in how the public perceived the AIDS crisis.

Through her works and through the impact of these photos, Diana became known for her goodness. There were many who said at the time that this goodness was performative, and not wholly sincere; a sentiment which is echoed in the ways in which young activists today are accused of performing for the likes and followers. This cynicism, though, misses the point. Because while there are certainly people who, at least in part, do good works for reasons other than mere altruism, the fact is that they are still doing those good works. When I recently spoke with author Rumaan Alam, in whose new novel, That Kind of Mother, Diana plays a role, he said this about the instinct to judge Diana harshly:

She was given everything in the world and she said, "Oh, I will campaign against landmines." That's a very particular choice, that's a very particular thing, and she actually did it. Whatever the motivations were, she did do that. You see that footage of her, and it's a pretty touching thing, her with these horribly maimed children. A princess from the House of Windsor with an African child with no arms. That is a very particular statement; you'd have to be a sociopath to go and sit with a child like that and not feel that in some way. So, how do you judge that person? It's hard to say.

People do, of course, or did, judge Diana harshly, or they reduced her to the gossip rag headlines, or even merely to the clothes she wore. But the reason Diana's legacy has endured, and done so specifically on the garbage pile that is the internet, is because it is so multifaceted; she was an imperfect woman with impeccable style who tried to use her often unwieldy power to make the world a better place. She was a princess, but she was a human first, and that is what endures about her legacy, that and other myriad binaries which she somehow managed to reconcile: frailty and strength, pathos and resolve, ball gowns and grandpa sneakers, yacht trips around the Mediterranean and amusement park visits with her kids. She was all those things, to so many people, and it is undoubtedly why she is still so adored today, as even those of us who will never be chased down a tunnel by the paparazzi must navigate what it means to be in the public eye, how we want to perform when everyone—or no one—is watching, and why doing good—including, perhaps, avoiding using an exploitative location tag on Instagram—is an important part of being good, or at least being the very best we can be.

NEXT UP
Fashion
Apple Martin Is A Chanel Girl Now
Fashion
R&B Artist María Isabel Is Making Room For New Style With Nuuly
Fashion
Telfar Thinks You Need An It Wallet To Go With Your It Bag
Entertainment
On "Princess Diana," Ice Spice Beats The Memes
Style + Culture, delivered straight to your inbox.