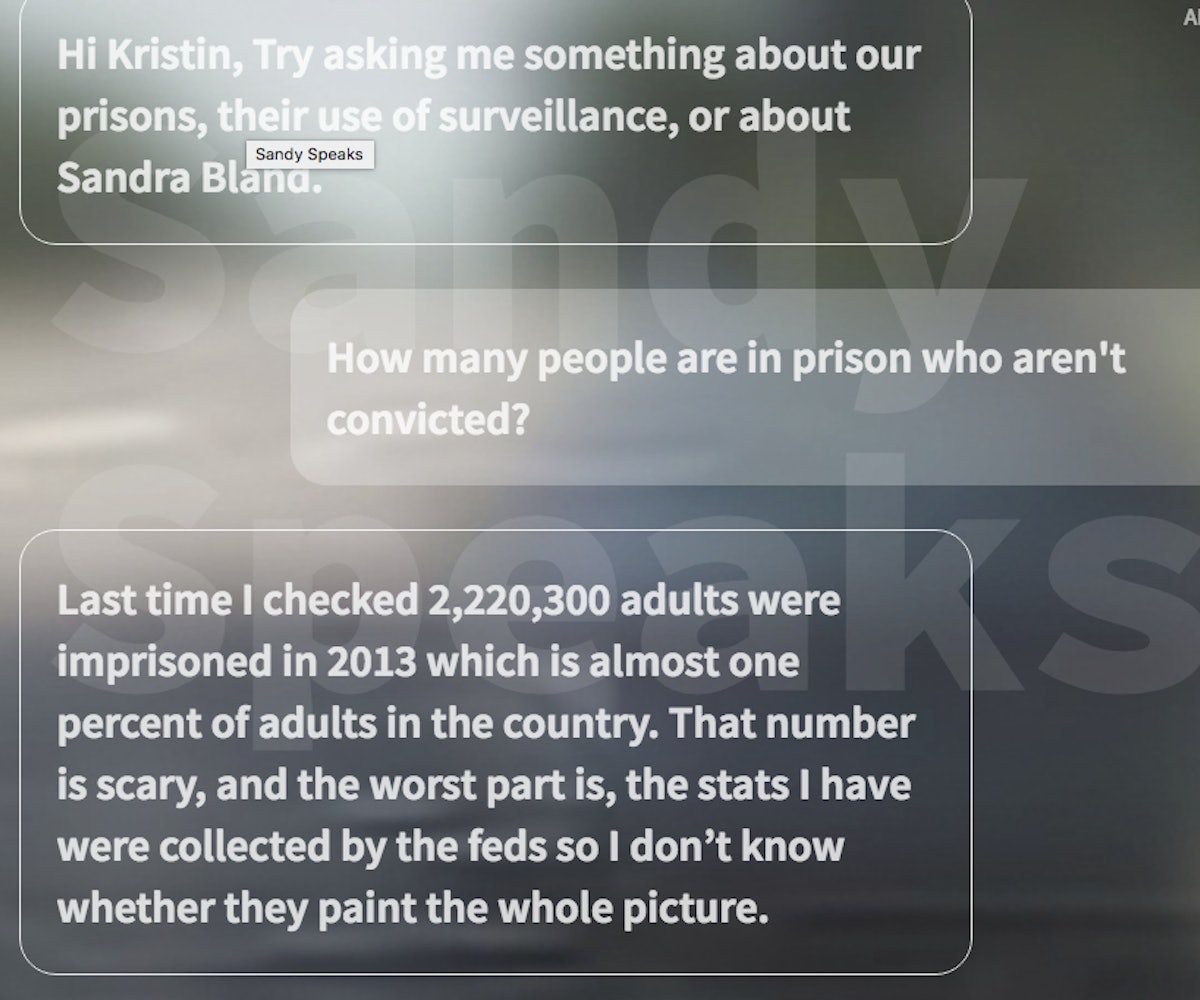 The internet is a place of paradox; all the information in the world is at our fingertips, and yet getting the precise knowledge we're seeking can sometimes be maddeningly frustrating. And sometimes, when searching for the answers you seek, you can wind up getting flooded with a whole lot of other noise, confusing your initial intentions, drowning the information you want. (What, you've never disappeared for two hours down a Wikipedia hole? You're a better person than us.)

All of this is to say that, right now, there's little doubt that many of us are on the internet looking for answers about questions like, What are my rights if I get arrested? Can I film police? and What is racial discrimination?

While there are plenty of places where we can go to search for answers to these questions (and more), a new project, sponsored by NewHive, has launched this week which can help any information-seekers out there. Sandy Speaks is a chatbot named after the politically conscious video series Sandra Bland, who was died while in police custody after being pulled over for a minor traffic infraction. The chatbot was launched by American Artist, who had this to say in their artist statement:

The project is named after Sandra’s eponymous video series “Sandy Speaks”, which was a politically-engaged series of cell phone videos that Sandra filmed and released periodically over social media in the months prior to her arrest. In “Sandy Speaks” Sandra expressed her views on police brutality, the Black Lives Matter campaign, and offered insight on how Black people of color should feel towards antagonism created by law enforcement. In the series she repeatedly acknowledges that she has a calling to educate the next generation on racial politics and that the relationship between police and Black people of color is something that can be healed through the education of youth.

Encountering Sandy Speaks, one is greeted with Sandra’s effervescent phrase with which she began many of her videos, “Good Morning Kings and Queens!” extending the same warm-heartedness of Sandra’s video presence that made the implications of her case ever more precarious. Creating a piece that simulates conversation with a living individual recontextualizes the legacy of Sandra Bland. It aims to continue her impetus of education through dynamic conversation. Sandy Speaks is a monument that is not stagnant, but rather an active and learning system that maintains what Sandra set out to perform.

Sandy Speaks was joined today by another NewHive launch, CAMERAROLL, a digital installation by vyle and Devin Kenny, which features two new songs by vyle, “THEY WON’T PUT THE SCANNERS DOWN(Torque)” and “Out Of Name,” a spoken word piece. The artists said in a statement:

“For thousands of years, different groups of people have exercised an innumerable quantity of behaviors that can affect others uniquely. Black people of older generations have always told stories filled with the misfortune of being stopped by sheriff’s deputies on a dark country road, European migrants with stories of discrimination from the US population, and Muslim airline passengers unable to fly because of how their name “reads”, amongst other injustices,” say the artists. “One thing that has changed in recent years is the affordability of portable computing, giving the masses the ability to document all of the current societal norms. They display an authentic view of the human experience that was virtually impossible in years before. Within this view every aspect becomes visible, our beauty and our blemishes. In the beginning, closed circuit cameras were touted as a way to keep people safe if no “human” eyes were in the area. Nowadays, the cameras in our devices act as both witness and bystander…”

So while the internet can indeed feel like an unsafe space at times, one full of triggers and trauma, NewHive is working to put things out into the ether which can educate and enlighten. Any more questions? Try asking Sandy Speaks yourself. Here are some of the questions it will best respond to: