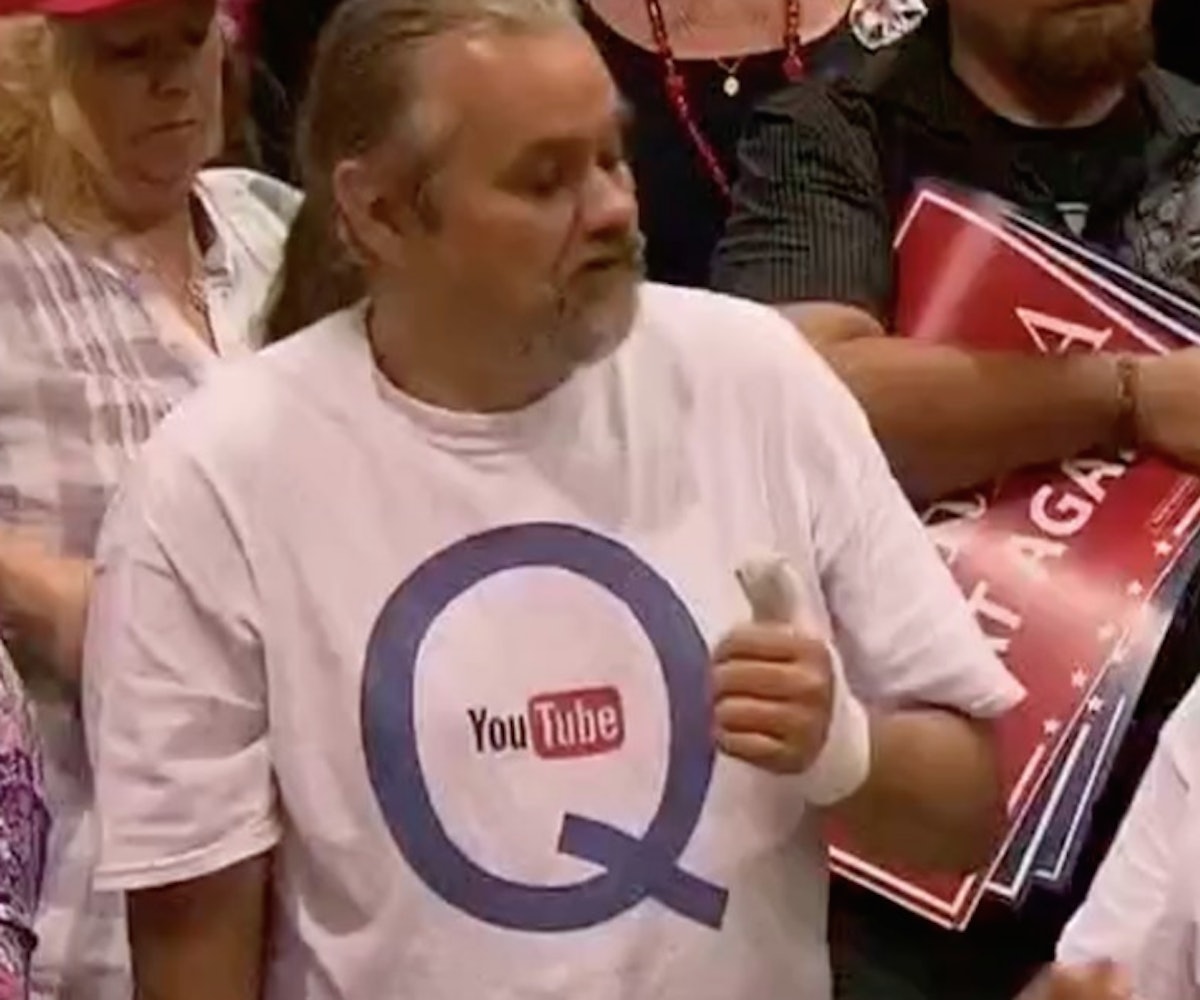 Last night, Donald Trump took the stage at a Tampa, Florida rally—espousing his normal mix of half-truths, self-aggrandizing boasts, and racist rhetoric. However, eagle-eyed viewers couldn't help but notice a strange, new presence amongst the crowd. Wearing shirts depicting a large "Q" around the YouTube logo and holding up signs that read things like "We Are Q" or "QAnon," The Washington Post identified these people as members of a "deranged conspiracy cult" born from the dark fringes of the right-wing internet.

Described by the Post as a "volatile mix of Pizzagate, InfoWars, and the Satanic Panic of the 1980s, multiplied by the power of the internet and with an extra boost from a handful of conservative celebrities," including Roseanne Barr and Curt Schilling, it's an unsettling real-world manifestation of an unhinged online phenomenon.

How exactly does YouTube fit into all of this? Earlier this week, the platform came under fire for unintentionally allowing its algorithm to boost videos baselessly alleging that some of Hollywood's biggest stars—namely Tom Hanks and Steven Spielberg—were pedophiles. As first noted by NBC reporter Ben Collins, this meant that top searches for those celebrities on YouTube returned videos of people alleging that they were victimized by them—with hashtags like #QAnon, #Pizzagate, and #Pedogate sprinkled into the mix.

According to the Post, QAnon appears to be an extension of the #Pizzagate conspiracy theory that accused high-profile Hollywood stars and Democratic party leaders of being involved in a pedophile ring allegedly operating out of a Washington, D.C. pizzeria. Though many people might dismiss #Pizzagate as being the work of fringe lunatics, because this is America, a lot of fringe lunatics have guns, and #Pizzagate reached its nadir in December 2016, when a man opened fire with an assault rifle on the pizzeria at the center of the conspiracy theory. That man is now serving a four-year prison sentence, but that hasn't stopped some people from still believing in this conspiracy; believers in it still lurk in the depths of 8chan, an anonymous forum described as "the unglued twin of better-known 4chan, a message board already untethered from reality," per the Post.

And it's this "unglued twin" that gave birth to QAnon. The theory was born on an 8chan thread playing host to an anonymous user known as "Q," who claimed to be a high-level government agent working against "the deep state" for Trump. Per The Guardian, "Q" was apparently first spotted last October on 4chan on a thread called “Calm Before the Storm." In the months since, "Q" has built up an online following (known as "bakers"). According to the Post, "Q" feeds tidbits of information (aka "bread crumbs") to the "bakers," in order to help them understand Trump's "storm"—or what they believe to be "the president’s final conquest over elites, globalists, and deep-state saboteurs." And though it's hard to say what they have planned, you can bet you'll start seeing more of the "bakers" in real life.

NEXT UP
Entertainment
Måneskin Is The Hot Italian Rock Band To Watch Right Now
Fashion
Balenciaga Will Reward You For Selling Your Vintage Bags Back
Life
NYLON Newsletter: September 29, 2022
Life
All About The Age Of Aquarius