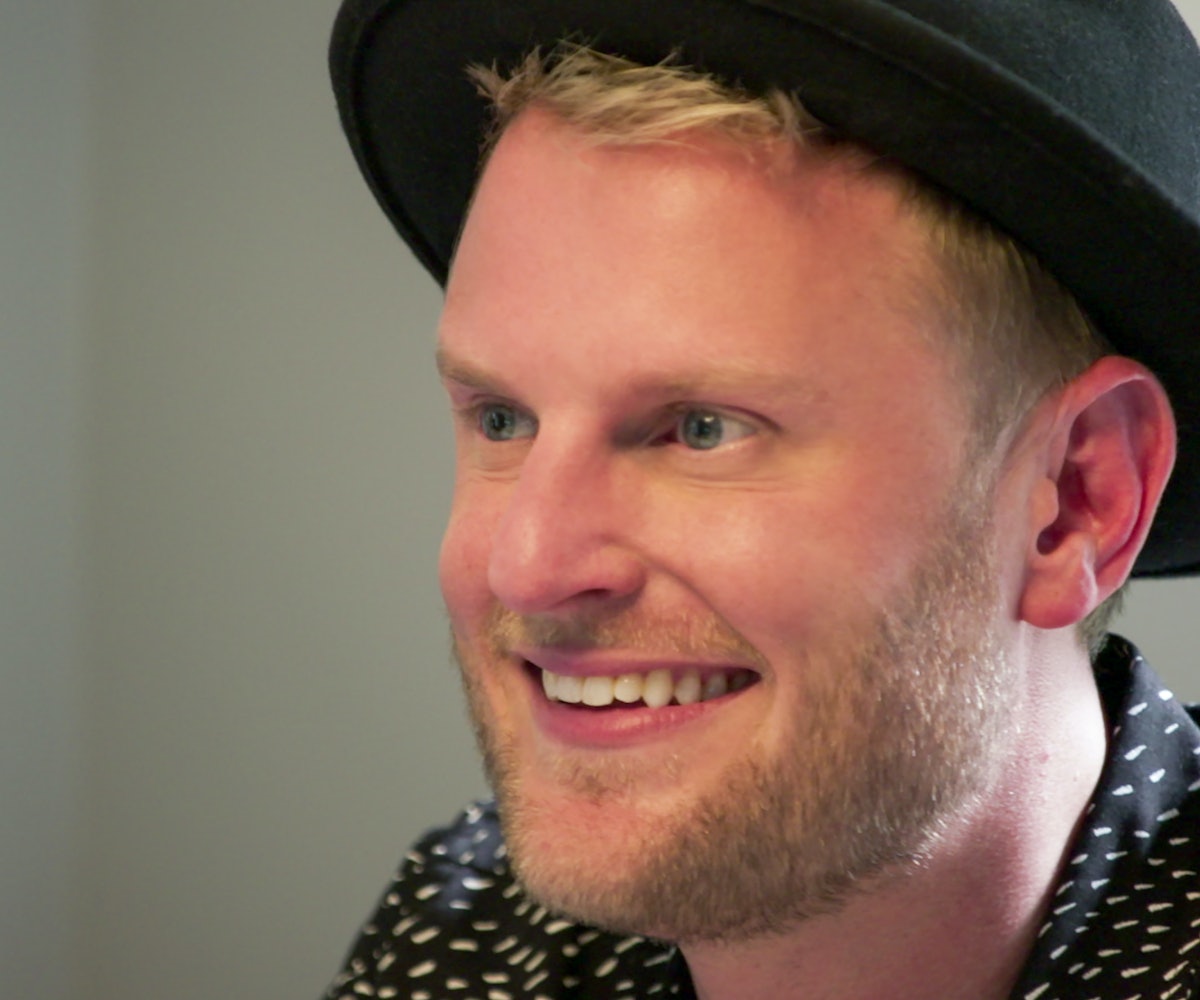 Out of the Fab 5, Queer Eye design expert Bobby Berk has become known as the one doing the lion's share of the work. While it seems like everyone else gets to bond with the heroes via snacks, style makeovers, or a good old lesson in sashaying, Bobby tends to be separated from the rest of the group, hidden amidst stacks of unfinished plywood and wall insulation. Every week, Bobby is saddled with a gargantuan home renovation with a four-day time limit—and there isn't a ton of time to fuck around. But while most of the internet will tell you that he is the hardest working member of the crew, Bobby himself is quick to dismiss the notion. In fact, he doesn't even believe he has the most difficult job. So then who does? Find out that and more—including which hero from Season 1 has kept his renovation going and what episode he almost didn't do—via our Q&A, below.

You know, I skipped a date to binge-watch Season 2.

That’s so funny! When I got the email that we had Season 2 in our screeners, I was like, “I have to watch them all now," even though the next morning I was supposed to go to our executive at Netflix's house because she's having me design it. I literally almost emailed her to be like, "I'm sorry, I have to cancel. Season 2 is out and I have got to watch it.” But, if I want a Season 3, I probably shouldn't cancel on her.

I have no doubt there’s going to be a Season 3. That said, why do you think that everyone has had such strong reactions to the reboot and why has it resonated with so many people?

To me, there is so much negativity in the world right now. Every time you turn on your TV, every time you get a notification on your phone, it's something that is frustrating. It makes you angry, it makes you sad and disappointed. We really wanted to do something different. We really wanted to give people hope and joy. Make people happy and make people humanize each other again. To realize that at the end of the day, we're not Republicans, we're not Democrats, we're just people. To find the love, acceptance, and joy in everyone again. I think that's why it's really resonating with people. It's helping them see people as individuals again and encourage people to really be nice to everyone.

This new season seems to really have hit home for you personally. Was there one specific moment that was particularly emotional for you?

Definitely episode one with Tammye. If you watched Season 1, you know that I have some issues still with religion—just from the background I grew up with. So to have to literally go into a church and help out a church... it was very hard for me. I almost didn't do the episode.

Just the fact that it had to do with a church... that was really a big no for me. But, after speaking to our marketing director at Scout Productions, Joel, he talked me into doing the episode. What he said was, "You know what, don't go into it thinking that you're going to help the church. Don't go into it thinking that you're trying to change the views of somebody there. Think of it as you going in there to make sure that all the little Bobbys and all the little Joels don't go through what we had to go through. Go into it in the hopes that you can change the minds of churches who aren't going to continue to preach the hate and the non-acceptance of homosexuals, gay people, queers, and the LGBTQs." So that is what kind of helped me finally decide to be okay with it—to really think of it as a way to help youth right now feel more accepted, and not have to feel that hate.

I am always blown away by how you can renovate an entire house in the span of, what, four days? How do you do that?

I have a really great team that helps me execute my design and my vision. Without my team, there is obviously no way that I would be physically able to do all of that. I have a great construction team that comes in and helps me rip out floors and rip out walls, put it all back in, do all the painting and the cabinets. Then I have my art department, who comes in and helps me execute the actual decor of the space—getting the furniture in, hanging up our curtains, accessories, lighting candles, getting it picture perfect. Without that team, I wouldn't be able to do it.

Do you ever find that you're not getting enough screen time because you're so busy redoing a house?

Yeah. You know, one of the big differences between my vertical and the other guys' is that I meet the guy on Tuesday. But because he can't see the home again until Friday,  I don't see him again really. Whereas the other guys work with him throughout the week, because their verticals are literally about him, physically and emotionally. Mine is about finding out what he likes and executing that. Just by the way our verticals work, unfortunately, you don't see me as much in the middle of the episodes, because I am dealing with the remodel.

What is typically the hardest part about a renovation for you, and what's the most rewarding?

The hardest part is definitely the time constraint. There's always so much more I want to do but, time-wise, can't accomplish it. The most rewarding thing, I would say, is just seeing the look on their faces and their families' faces when they first see the space and realize that I have spent a lot of time, thought, and effort into making sure the space is very personal for them. I never want them to walk into that space and be like, "Oh, this was just done for TV. This is not me at all. This does not feel like me. I don't know how I am going to live with this." I want them to walk in and be like, "Wow, this guy saw into my soul, and this is the home I never knew I wanted." That's the most rewarding thing to me—when I hit the nail on the head and they're like, "Oh my god, this is exactly what I wanted. I just didn't know it."

Are you ever worried that no one is going to take care of this amazing thing that you made?

But you know, one of the guys, Neal from Season 1, he's kept it going. Obviously, I didn't have time to do all of his guest bedrooms and bathrooms and stuff, but I get texts and calls from him all the time asking my advice on different rooms. He's kept going with remodeling, and it really makes me excited that I was able to give him that little boost that could help him take that project on.

Out of all the guys, you’re the one who’s turned into this internet meme, based on the fact that everyone thinks you’re the unsung hero of the five. How does that make you feel?

I mean, my vertical might be the most labor-intensive and time-consuming, but it's definitely not the hardest job. It's definitely not the most important job. None of us can do what we do without the others. We were talking about this earlier. I was asked, "Who out of you has the hardest job?" and I said "Me!" and then I said, "But actually, no." I would have to say Karamo has the hardest job because at the end of the day, every week, I know I am remodeling someone's home. Tan knows he's picking out clothes. Jonathan knows that he is going to do a haircut and grooming. Antoni knows he's going to be cooking. Every single week Karamo has to meet that guy and then figure out: "How can I help him?" He literally has to write his own narrative every single week and figure out the best way that he can help heal this guy emotionally.

Have you guys talked about that fan reaction at all?

Not really, because, in all honesty, we have to kind of detach ourselves from that. A lot of people are always going to have their opinions, but we know what we do, we know how we help each other and what goes on behind the scenes. I don't really think it's been an issue.

If you could switch jobs with any of the other guys, what would you choose and why?