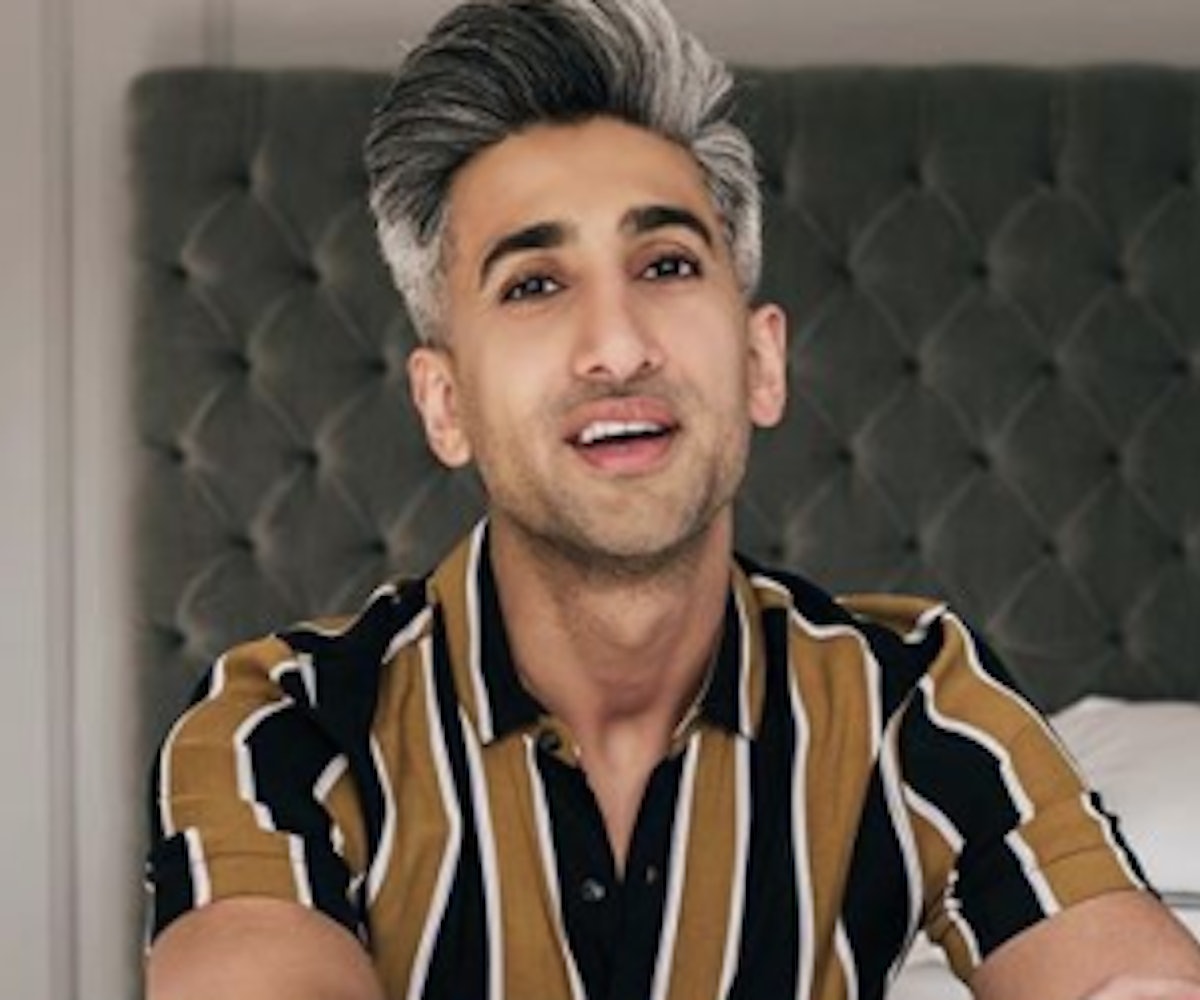 From shows like What Not to Wear to Tim Gunn’s Guide to Style, it’s pretty much written into the rules of reality television that clothes are the key to a transformative experience. Enter Queer Eye’s fashion expert Tan France, who serves up a seemingly endless array of smart prints and fitted pants to clueless men (and in this coming season, women and transmen!), all in an effort to help them become the best versions of themselves.

So ahead of Season 2’s premiere, we spoke to Tan about his first trans makeover, fragile masculinity’s problem with fashion, and that cop episode from last season. Read our Q&A, below.

What would you say is the hardest part of your job?

Getting the heroes to really let their guard down when it comes to clothes. I think a lot of men—straight men—see clothing as superficial and shallow. So the hardest part is convincing them that this is just as important as any of the other verticals on the show. For me personally, if I don't look a certain way, I don't feel confident going into my day and doing the things that I need to do that day. So, I think it's actually a really powerful way of commanding a room: the way you dress.

Queer Eye touches on some pretty pertinent American issues, like police brutality, Trump, etc. What is it like as the one non-American on the show?

I've been in the U.S. for about 10 years, so I understand America almost as well as I do home—England. I'm obviously a person of color, so the issues that we cover on the show, including police brutality or Black Lives Matter, I feel all the same kind of feels that Karamo does when I'm pulled over by a police officer. And you see our reactions when we're pulled over by the police. The first thing I say is that they saw me in the back, and I giggle through it because that's what I do when I'm nervous. But it's true. I'm very much aware of those feelings. I think that we have the same issues in the U.K. as you guys have in the U.S.

What would you say then is the biggest difference?

In the U.K., we're more comfortable saying what we're feeling. That's just us in general. I think Americans—not just in the coastal states, but everywhere—are a lot more passive-aggressive. Whereas in the U.K., they're just aggressive-aggressive. So if they've got an opinion, you're gonna hear it whether you like it or not.

Most Americans think that English people are the sweetest people in the world and that there's no way they would ever hurt your feelings. That is not the case at all. If we've got something to say, we say it. Even my castmates are shocked. The amount of times they've said, "Only Tan would say that," because it's true! If we've got something to say, whether it's very sweet or not, we say it. Usually, when I speak, it's not meant to be mean, but for my American counterparts, I think that they see it as quite shocking when I give my opinion so freely.

I’m curious about something you said on Skylar’s episode—that you’d never really gotten to know a trans person before that episode.

I want to push that back slightly and say that the scenes in that episode were the proudest moments of the show for me, personally. Because when we go into an episode with any of our heroes, we agree on what we want to do a week or so in advance. We don't get to meet them, but we get a dossier and a picture. And we kind of are able to dictate what we want to do. The producers and the showrunner has a loose plan of how they want the episode to go, and then we say whether we want to do that or not. If we think that something could make the episode better, we suggest it. I revealed during the pre-production meeting that I'd never had an interaction with a trans person before, and I think it's really important that we do this sensitively and really well. But I said I wanted to be able to ask the questions that people around the world might want to ask. I didn't want this to just be a case of, “Well, all gays know trans people, and all members of the LGBTQIA community know each other, and we understand each other’s fight.” I don't think that's the case at all.

It wasn't vocalized during the episode, but [food and wine expert Antoni Porowski] hadn't interacted with a trans person before either, as far as I'm aware. But I fought for a certain scene, and that's why [that scene with Skylar is] my scene, and I got to be the one asking all those questions. I think that is a common misconception—that just because we're part of the LGBTQIA community we all have interactions with people and we understand their life as well as we do our own. That is a massive, common misconception. I know I have many gay friends and they all feel the same way. Some of them don't understand the lesbian community, some of them don't understand the trans community. That's just the way it is. And I live in Salt Lake City. I moved from a small town in the U.K. Trans people, if they were trans, definitely didn't want to stay in a small town. And if they're trans, they definitely aren't hanging around the places that I'm at in Salt Lake City. They usually move to coastal states where their lives are easier, and they're more welcomed in those states than they are in somewhere like Utah.

Has it been weird for you to do this hard pivot into fame? Like having people scrutinize your every move and have to answer tough questions.

With the good comes the bad, but the majority of it's been amazing. Knowing that you can influence and encourage people to live a version of themselves that they didn't know was possible is wonderful. That feels really powerful, and I'm really proud of that. However, there are some negatives. You do feel like your words could be misconstrued, and the comments that you make could offend somebody. There's a lot of time spent making sure that I'm speaking correctly and that I'm not saying anything that could be inflammatory. I think that's the only real downside of all of this.

That's so exhausting though.

Honestly, the hardest part for me is not that I usually say something that's offensive, it's usually that I swear a disgusting amount. And reining that in has been really, really hard. I think that there were a lot more bleeps in Season 2 than there were in Season 1 for sure.

I was talking to [culture expert Karamo Brown] earlier and asked him if he could switch jobs with any of the other guys, and he immediately said fashion—

No, I'm going to have to disagree with him, because he would just put everybody in a bomber.

I think that's a good look. It's very chic.

What about you? If you could switch jobs with anyone, who would it be and why?

Antoni, because I actually love to cook... well, I love to cook, but I love to bake. I wonder if we could have a world where we all switch roles one day. But instead of me teaching them how to cook real food, I would cook the one food group that I really appreciate, which is cake.

I love your update to the food pyramid.

Yeah, cake is an entire food group. That's what I would want to do. The other categories I like... the other boys think I would do grooming, just because I am very groomed. However, I have no real interest in that.

I mean your brows are on point.

Thank you. It's mostly genetics! I don't do much with my brows at all. I just get rid of my mono[brow], and then we're good. I don't let anybody else touch them! I'm very particular about my hair and my eyebrows. Nobody styles my hair, I do it myself. And I even do the top of my hair myself. Nobody's cut my hair in 10, 12 years. And my brows—nobody does those. I just pluck the center of them myself, and then we're good to go!

I need you and [grooming expert Jonathan Van Ness] to switch jobs, so that everyone can be in a crop top—

So here's the thing, I started the crop top thing. They all now do it, but I totally started that. I was the first one to wear a couple on the show! And then Jonathan got jealous….